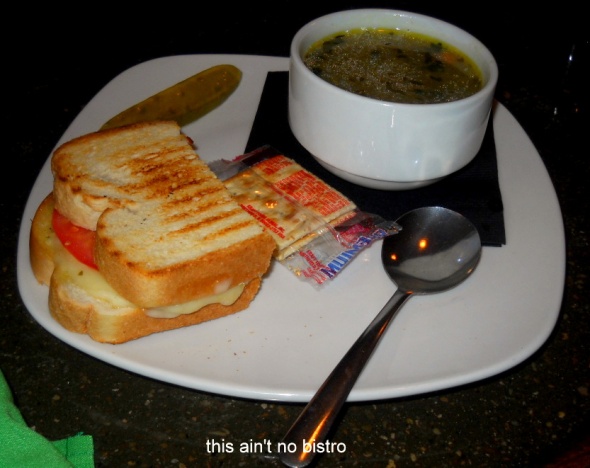 Another new joint has opened in Fountain Square;Pure Food Eatery and in this case Pure means simple.It is a lovely little place,not too artsy fartsy or too urban tavern chic;just nice.The menu is Panini Press centered.Sandwiches and wraps in simple and tasty combos.Not a single french fry or chicken wing to be found;no fryers anywhere.They did fall into the aioli trap however.That is where you flavor mayo call it (fill in the blank)mayo and “jazz”up your menu.A good emulsion sauce has its place but sometimes people stick it in the most unlikely places;like grilled cheese.Since I am still dentally challenged that is what I ordered.Actually a half sandwich and a cup of soup.All their Panini are available as 1/2 or whole.The wholes are reasonably priced,in the $7-$8 range;the 1/2’s are not as reasonable;at $6.The 3 cheese Panini was pretty good.A curious combo of Havarti,Swiss and Provolone cheeses with the obligatory slice of tomato.Their addition of Pesto mayo;although not traditional,did bring a nice additional taste to the mild cheeses;also a touch of unctiousness to the toasted sour dough bread.Patrick decided on a BLT.Nothing out of the ordinary except for the avocado spread;which Pat turned down;due to onion content.We both enjoyed our sandwiches;and more than enjoyed the SOD;Chicken and Rice. A delicious home-made stock loaded with fresh Tarragon.The stock alone was worth the 90 cent up-charge,the diced chicken and rice was a bonus.In addition to sour dough they also offer wheat and rye bread,which would go well with some of their other filling options.

The biggest deal of the day was the Thursday beer special.New Belgiums for $2.50.I discovered Shift by New Belgium.They call it a Lager but it has a definite Ale quality.Delicious;and a bargain at $2.50 for a 16 oz can.The thing about good beer is you get nutrition and you can consume regardless of  the condition of your teeth.

This entry was posted on October 14, 2012 by Benson. It was filed under taverns and stuff and was tagged with , Cheese, Cooking, Food, French fries, Havarti, Home, Provolone, provolone cheeses, restaurants, Sandwiches, sour dough bread, Switzerland.