Well we headed back to Beech Grove today to visit our favorite range at Beech Grove Firearms. Subsequently we wanted a place close by to eat. Well, since the Grove is not quite the dining destination for Indy our choses were rather limited. This joint was recommended by one of Pat’s neighbors. And it proved to be pretty good.

It’s located in a strip mall close to an Inter-State exchange and surrounded by a plethora of fast food eateries. And judging by the speed at which out food came out Egg Roll fit right in. The interior was bright, and large. And it has the charm of a Wal-Mart. I don’t mean that in a nasty or snarky way I just mean the place is utilitarian and not at very “cozy”.

You order and pay at a counter, then sit and the staff brings you your food. I ordered an appetizer combo to share for $5.99. 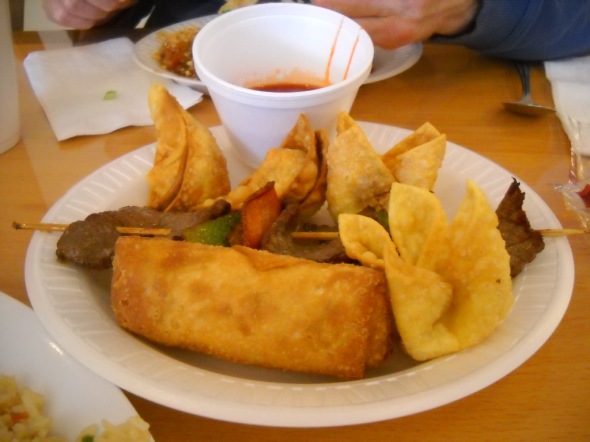 It consisted of 2 crab Rangoon, 2 wonton, a beef stick ( that’s the kabob looking thing in the center ) an egg roll and 2 chicken wings. The Rangoon was unique in the fact that it wasn’t overloaded with cream cheese and you could actually detect a morsel, that I assume was crab. The wonton wasn’t as flavorful as I expected. They were actually pretty bland. The beef stick was pretty lackluster as well. Three pieces of tasty but tough beef stuck on a stick with 2 tiny pieces of green pepper and carrot. As for the wings, nothing exceptional. Now that leaves the egg roll. It wasn’t that bad, but I have had a lot better.

For my “main” course I got a soft noodle combo dish. That is a big plate of spaghetti, stir fried with beef, pork, shrimp and chicken and veggies all in a sauce of unknown ingredients. This was very tasty. I can’t say the same for the rather run of the mill rice that came with it. This dish, because it was a bigger portion than the lunch specials and it came on a real ceramic plate, not one of paper it cost $7.75.

They don’t offer menus. The food offerings are posted on the wall behind the order counter. And to the right of the counter is the obligatory pictures of the dishes. 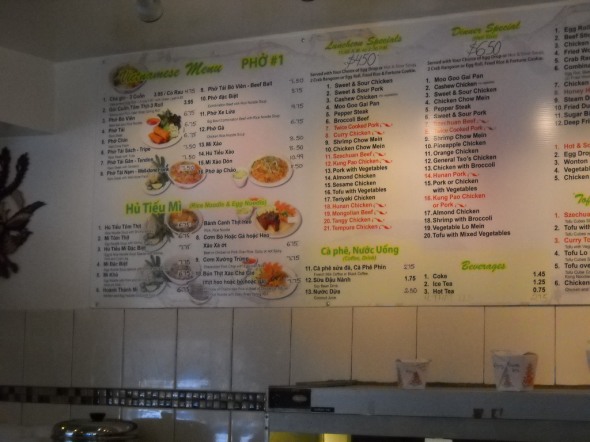 Probably the coolest thing about this joint is the price of the lunch specials-$4.50. That includes an egg roll and a cup of soup. Pat being ever the frugal shopper ordered a lunch special.

This entry was posted on November 8, 2013 by Benson. It was filed under ethnic and was tagged with Beef, Crab rangoon, Egg Roll, Food, Pat, Pho, Walmart, Wonton.