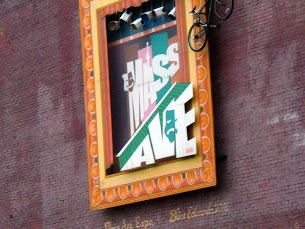 A poor shot of a cool artifact on the building across the street. 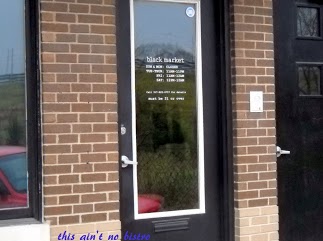 This is a joint we have been wanting to go to for quite a while. It has a reputation for very good food and a nice selection of craft beers. It’s not a very big place with the seating consisting of a few tables along the wall, a large bar and 3 very big tables in the center. Long and slender, like you would find in a banquet hall. It is an attractive place; all industrial chic with exposed duct work, dark walls, slate and black iron pipe fittings in the men’s room.

We had the bar to ourselves and had the most delightful server. Efficient, professional and attentive, and very knowledgeable of the menu. After much reassurance from the aforementioned server, that he would not get any onion Pat selected baked rigatoni. A pasta dish with butternut squash,kale and both house made mozzarella and focaccia, all for $10. 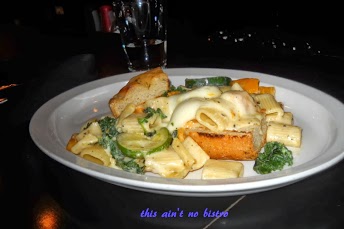 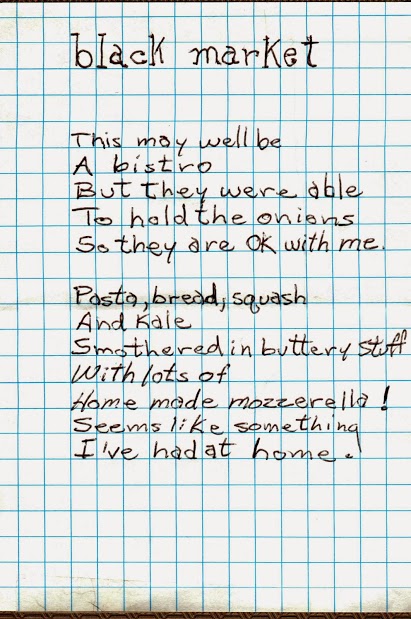 At time of service our waitress told Pat that they made a special sauce, just for him, sans onion. I went off menu and ordered their special for $11. That was fried perch with waffle. Served with baked beans, young curly kale and Sirachi butter. Odd ain’t it. This particular dish did not hit on all cylinders for me. I do admire their cojones for doing it though. I think restaurants should push the envelope; as far as they can. In this case I think it could have used a few adjustments. They used, what appeared to be black beans for the baked beans. Not the most attractive choice. That might be why it was buried under the kale. They also could have cooked the beans a mite longer and reduced the cayenne, especially with the Sirachi butter ; which was excellent,as was the perch. As for the waffle it was a wee bit dry. Actually I thought the whole dish was on the arid side. I am surprised they didn’t add some sort of syrup. Possibly a gastrique . I think a little sweet and sour would have fit in well. But; that is just my opinion. This was just one dish and a special at that. I will definitely be back first chance I get. I want to try their chicken pozole and the blue gill and grits. They both sound like a bunch of lip smackin’ fun. 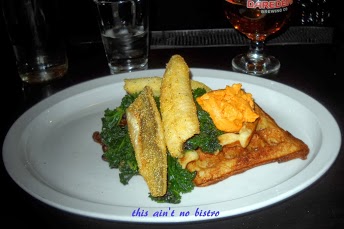 This entry was posted on December 6, 2013 by Benson. It was filed under Uncategorized and was tagged with Baked beans, Bean, Beans and Legumes, blue gill, cook, Dairy, Fruit and Vegetable, gastrique, Home, kale, perch, pozole.