I have been looking forward to this place opening for quite a while. It opened a few weeks back; during the sweet 16 Tournament, with very little fan fare. It’s situated in the old Chateau Thomas Winery space, and is huge. Prior to the winery the space was a garage of some sort as there are three large garage doors in the main sitting area that open to an expansive outdoor seating area. I took several pictures but pictures alone don’t do the joint justice. 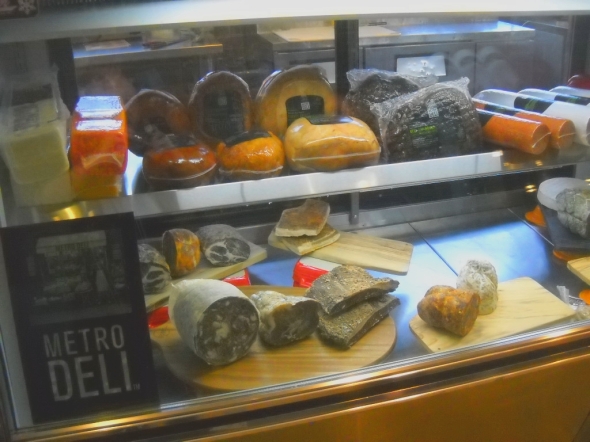 This is The Larder. Tow Yard’s kitchen. They feature a large selection of Smoking Goose meats as well as different cheeses and veggies. So it’s actually a deli as well.

I found their menu to be quite unique. It was an interesting blend of oven roasting, braising and deli items. They even offer fried gator and grilled Long donuts, stuffed with cheese. A foodies paradise.

Pat opted for the whole Prohibition, a roast beef sandwich 86 onion, 86 mayo. Unfortunately when it came out it was a Bourdain, a more traditional deli sandwich with uncured ham, salami, and capiocolla. Our server naturally apologized,re ordered and brought a go box. So Pat scored a free sandwich. 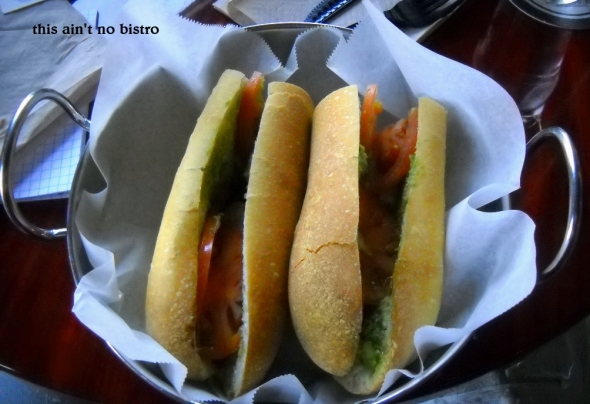 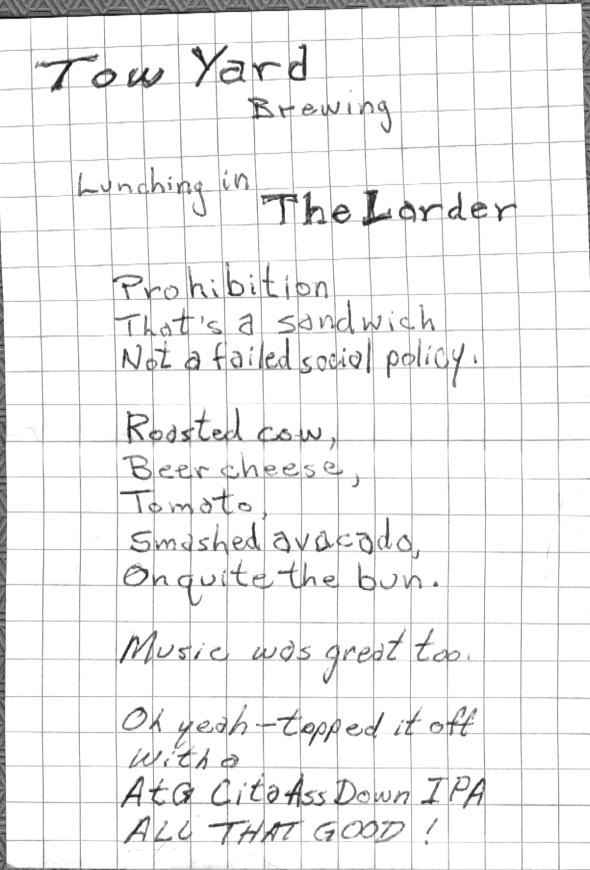 Oh I forgot to mention one minor disappointment. They are about 2 to 3 weeks from having their first batch of beer ready to drink. I say minor because they have a great selection of local and micro beers available. Also I think the food is good enough to draw you in even if they only sold soft drinks. Speaking of which. They found a local place that makes craft soda products. Now that is unique. 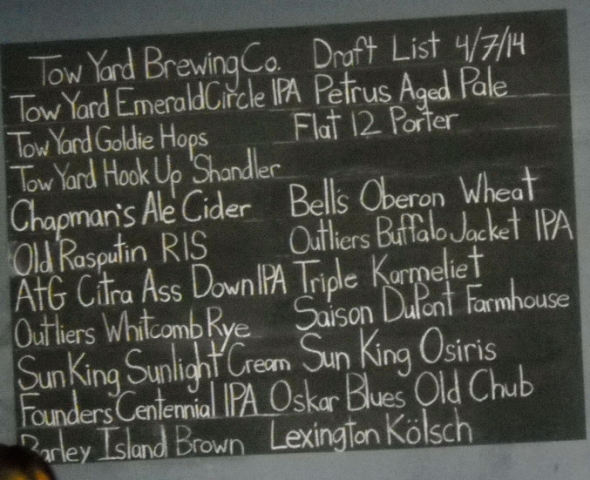 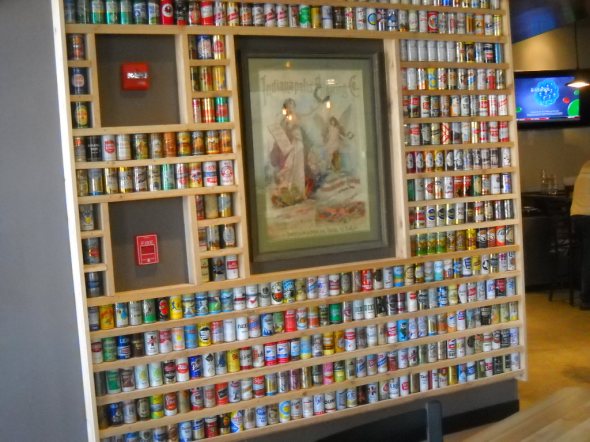 I decided to order a half Pig Vicious and a half Ty Webb. I had no idea the “halves ” would be so big.

I scanned the menu and am including it at the end. That way people can see the “stuff” in the sandwiches and the pricing.

This is the Pig Vicious. A damn fine sandwich. Lovely pork, sweet chunks of pickle and a spicy horseradish mustard. I honestly couldn’t tell where the braised pork ended and the uncured ham began. As far as the onion jam goes I couldn’t detect any onion flavor per se but some of the sweetness may not have come from the refrigerator pickles. In time they might find that some of the ingredients are not essential to the taste. But regardless the Pig Vicious is a great tasting sandwich. And the stainless “pots” they but the sandwiches in are a statement in themselves.

My other choice, the Ty Webb was the most compelling. Merquez is a Moroccan sausage made of lamb or beef and seasoned with red peppers and spices indigenous to North African cooking. In this case it is made into “meat balls” and put in the largest pita bread I’ve seen. The slight heat from the sausage was nicely tamed by the yogurt dill sauce. The paneer was most unusual in that it was in cubes and seared on one side. Which, to me brought another dimension to the cheese. And bonus; the halves were so big I got a bunch of food to take home. Three sandwiches, three home runs. To all concerned great job.

Close up showing a cube of paneer.

Great food; great beverage and great service. Thanks to our server Jason. The only downer to this joint is the parking. There isn’t any. The nearest lot charges $10. But just north is street parking. So I don’t think this is a business killer. In general parking downtown leaves a lot to be desired. And as Pat pointed out the Tow Yard is a destination within a destination. I mean the joint is an Andrew Luck throw from Lucas Stadium. And the tailgate lot is a short block away. Also the NCAA basketball tourney has plans on using Indy in the future and those are all held at the stadium as well.

This entry was posted on April 11, 2014 by Benson. It was filed under taverns and stuff and was tagged with ale, Andrew Luck, antipasti, cheese board, craft beer, Greek olives, Lucas Oil Stadium, NCAA Tourney, prosciutto, salami.