Okay. This joint hit Indy this summer. It’s a home-grown “chain”. Which means they started in Lafayette Indiana, expanded to West Lafayette and eventually opened another joint in Indy. They managed to secure a spot at the corner of Boardwalk and Park Place. That is to say they found a very nice location and did it proud.

The place is large and nicely appointed. You can tell they have a good idea as to how to run a business. From what I could read on the reviews the place was not received very well. Pat and Fran went there at opening and had mixed thoughts about food and prices. They have a nice presence on the Net however there are no prices listed. I find that somewhat disconcerting. What I found was a fine little pub with some decent food and competitive prices. 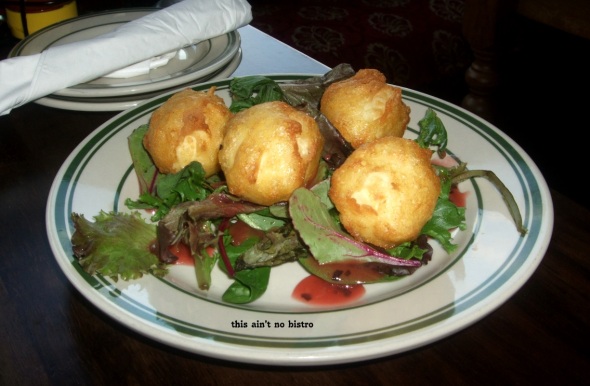 We ordered the goat cheese fritter appetizer. Little croquettes of breaded goat cheese on a bed of mixed greens with a raspberry vinaigrette. Actually it was not too bad. The slightly sour cheese, bitter greens and a sweet raspberry dressing made for a tasty bite. Cost: $ 8.45. 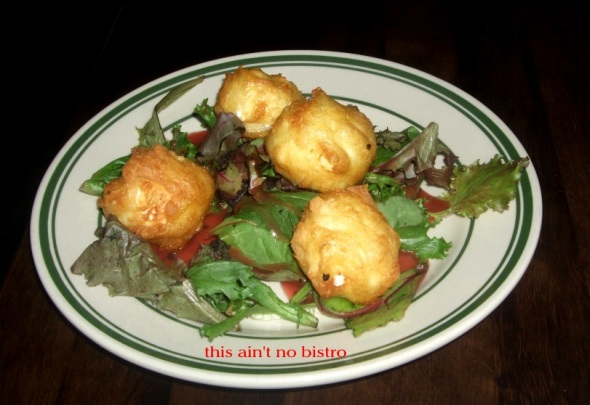 Our server, Holleh did an excellent job at service. She was on top of Pat’s onion aversion. She told him that the mashed potatoes had onion in them. Imagine that. He ordered a half order of corn beef and cabbage subbing house chips for the mashed potatoes. Their chips are thick slices of fried potato. 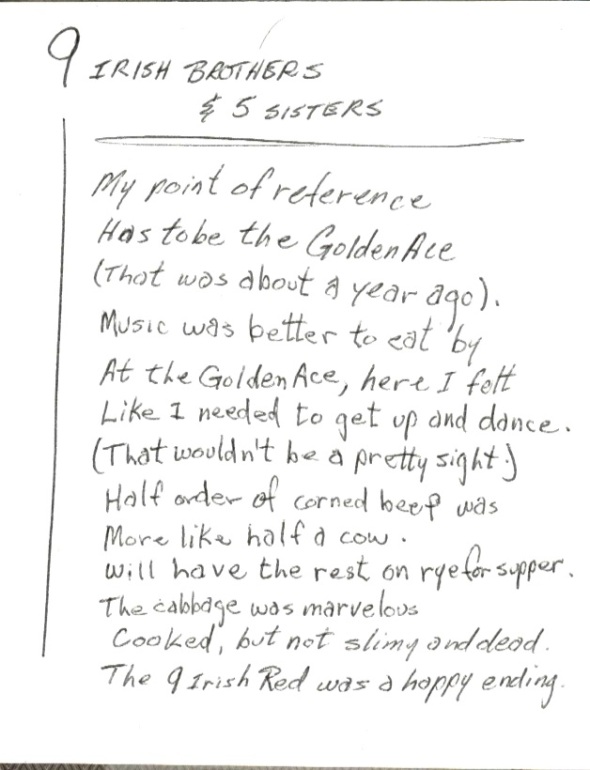 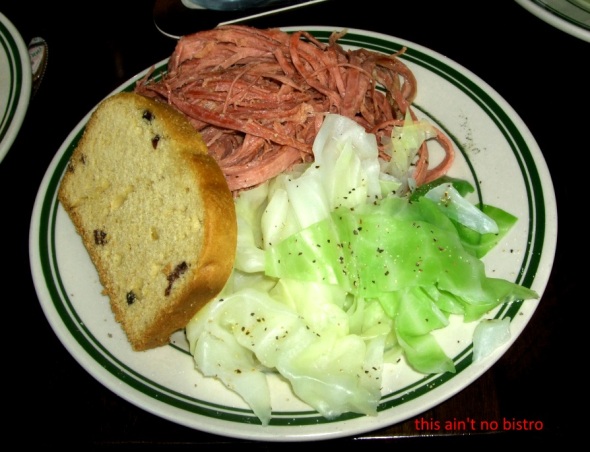 This is my lunch. It is a new addition to the menu. They call it a Fisherman’s Pie. A take off on a Shepherd’s Pie. It was very interesting. It came out in an 8 or 10 ounce crock. A healthy portion for $7.45. It was a blend of salmon, white fish, shrimp and veggies in a cream sauce. Covered with mashed potatoes and cheese. Well. Your first taste, naturally was tater and cheese. Then you hit the cream sauce. Tasty, but overwhelming. There was no texture in the dish. The salmon was like the white fish. Which was like the shrimp. Or the vegetables. The flavor was all about the  sauce. . I thought it was tasty I just didn’t taste the fish. I probably would not get it again, the way it was prepared. The soda bread rocked.

Now this joint is noted for its Whisky, Whiskey flights. As well as their Guinness pours.

Now this is really difficult to read. That is my fault. I still have not learned the proper way to use my scanning wand. Sorry about that. Any one with suggestions; let me know.

I opted for the Lesser Know Great Flight. It had single malt, blended and pot still. All the basic whiskey ( whisky) groups. I though it was great. And a bargain at $14.

I know Shelly. I should have tried the Single Malt Scotch Flight; but I was confused. They were playing the Rover Boys. And I was drinking Guinness. I didn’t have a chance.

But for real. This is a good joint to visit. The food is good, prices are fair and the service is on point. I have to give a shout out to Holleh. Excellent job.

This entry was posted on October 16, 2014 by Benson. It was filed under ethnic and was tagged with eats, Food, Guinness, indianapolis dining, indy restaurants, Lunch, shepherds pie.