Well;here we are on the West side. We don’t seem to get here too often. For some reason we seem to stay in that central corridor of South, Central and North. Well we gonna’ try and fix that.

I am not sure how long this Smoke House has been around,but I first heard of it a few weeks ago, and the reviews I have read have been pretty positive. It’s located in a strip mall,and can be a bit tricky to find,as it is a distance from the street. However once you get close the aroma draws you, literally right to the front door. 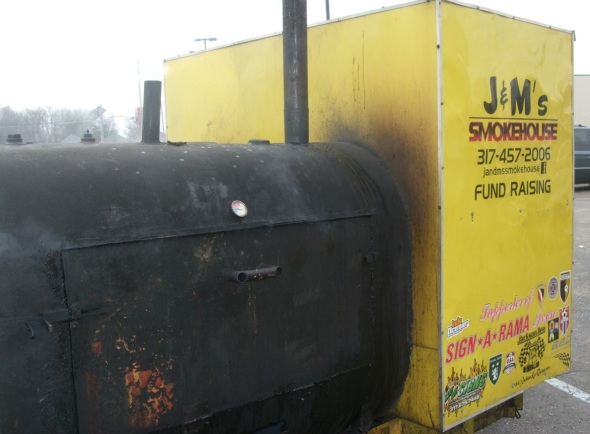 This bad boy sits right in front of the joint,and the day we were there it was in service,smoking some pork butts. I was able to chat with the young man working the post and he told me they used a bit of dry rub only on the brisket. This aroma is the best ad I could think of for a BBQ joint.

Once inside we found a neat little space. Bright and clean.

They make their own sauces and keep them in squeeze bottles on the tables. They offer a sassy sweet, a hot and a more east coast mustard style. We started off with an order of fried mushrooms. 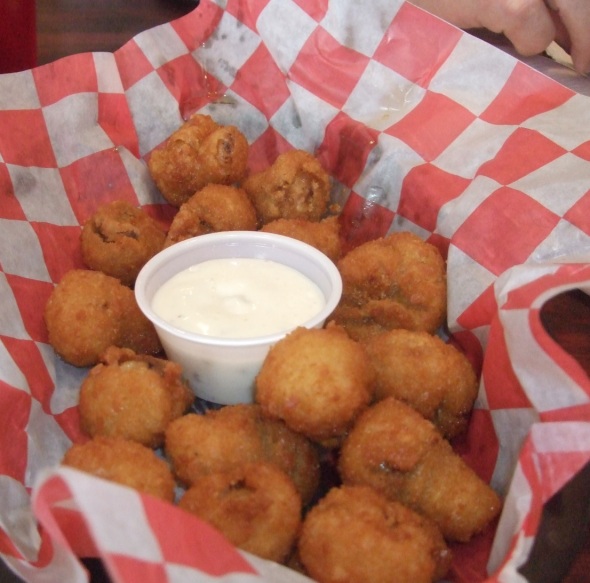 I have to say that their mushroom appetizer was average, at best. Small button mushrooms with a rather boring coating and served with a very non descript Ranch dressing. Average price and average taste. Our server gave us a taste of their pulled pork, which sealed the deal for Pat. 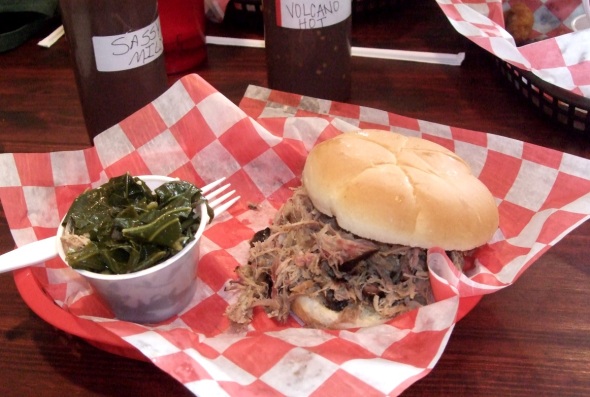 I was really tempted by their smoked meatball sandwich. But I thought I would play it safe and go with the brisket sandwich with Lava beans.

Where do I begin? The meat had a really nice smoke flavor and a picture perfect smoke ring, but the overall it missed the mark. The meat was chewy and hard to bite and pretty bland. In order to get some flavor I had to add some sauce. Sauce should be used sparingly to enhance an existing flavor. Not as a substitute for flavor. For what it is worth I think they should use a rub and adjust the cook time. A rub does two things. Adds an extra level of flavor and it also does a Chemistry thing to help tendering the meat. They have their smoker set on 175 degrees, which is a sweet zone for Q. So, again this is just one man’s opinion.

The beans were really good. A nice level of heat and full of meat. A really good accompaniment for cow or pig. The sauces were decent , and the prices were on point as well.

This entry was posted on January 2, 2015 by Benson. It was filed under bbq and was tagged with bbq, bbq sauce, beans, collard greens, Pulled pork, smoked brisket.