I don’t usually go out at night. Especially on Saturday night. However I decided to make an exception this Saturday night. I had plans to meet some friends at a new joint on Mass. Ave. I really wanted to check this particular joint out.

When I go downtown I always take a bus;or a cab. Parking is insane, and expensive. Bus fare is cheap and even cab fare is reasonable compared to driving. However I had no idea that there were two events going on at the Stadium and the Arena. So long story short I decided to head to Pearl Street. Pat and I have been there before, before the blog and we had talked about going back. Well I just jumped the gun.

I know from earlier experience they can make a good pie. I ordered an 8 inch deep dish pizza. The basic price is $8.75. For meat it is an extra $ 1.50 and $1.00 for veggies. That makes a sausage and mushroom deep dish pizza pie $11.25. I think that is pretty expensive. Another reason I prefer lunch. They do offer a cup of soup or a salad for an extra $1.99 with a pizza.

The soup they had for the day was a spicy chicken with gorgonzola. 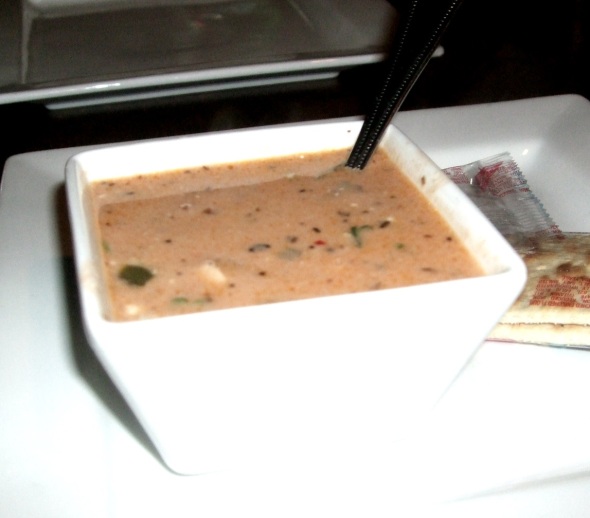 A smooth soup with a bit of a bite and a touch of bleu cheese funk from the Gorgonzola. I found it to be a very good soup. What I enjoyed most about it was the bleu cheese component was added as a garnish so the taste wasn’t changed by heat. 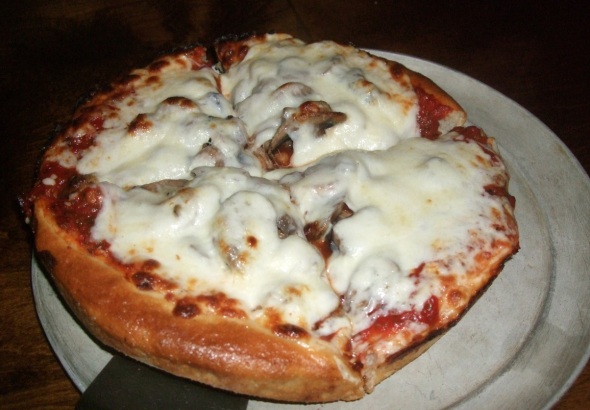 Now the pie. I thought it was delicious. The dough was fluffy and bread like around the edges. With a nice buttery top

crunch and the bottom with the all the good stuff in it was nice and crisp. I think every part was great. From the sauce to the sausage and mushrooms I thought it was a fine piece of work. 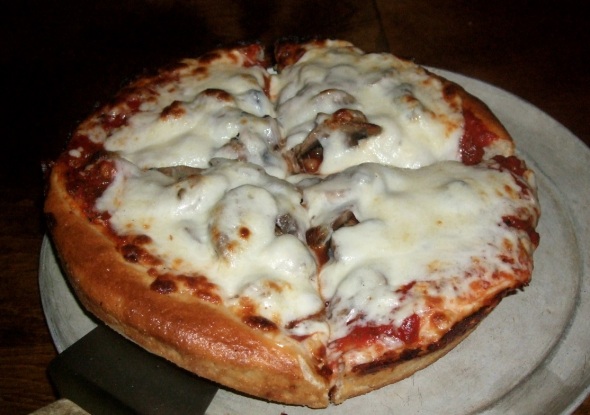 I think this place is a wonderful choice for a pizza and beer. Right smack dab in the middle of the down town loop. It sits on Pearl Street. That is the alley that runs from Meridian Street to Penn. on the North side of the Century Building. In that area called the Wholesale District. So if your are in the area and have a hankering for a pie and beer this is as good as you will find.

This entry was posted on January 24, 2015 by Benson. It was filed under ethnic and was tagged with deep dish pizza, dinner in Indy, Gorgonzola, Pizza, Saturday, Sausage.