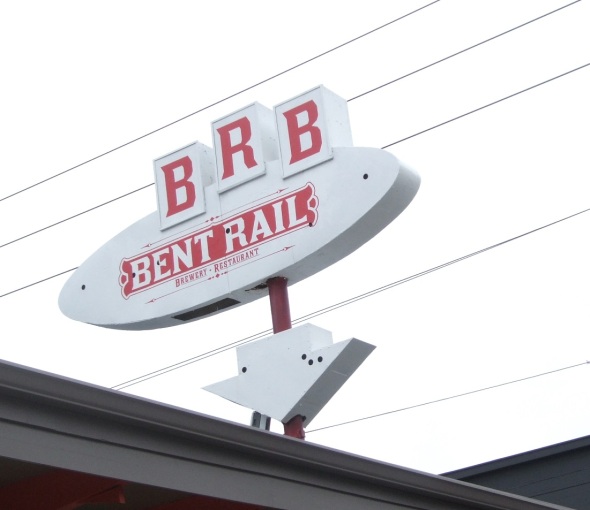 Another new joint. According to the Star newspaper twenty new places are opening in Indianapolis this year, most of which are locally owned.  This place was the most anticipated, to me because it was the most ambitious project. A large property right on the Monon Trail with a huge old building that started its life in the 1930’s as a commercial cleaner. I doubt that the folks that put the building up could have guessed that 70 years later it would become a brewery. Or at least will soon be an actual brewery. Right now they are pouring other local beers. Of course some folks are whining about that. After all this time, etc. My thoughts are, get a million bucks and try your hand and see how easy it is.

I got a look at the menu just the other day and I was pretty excited. Naturally it all depends on the execution if it flies or not.

The place is enormous. It will seat 200 folks. Right now they are not jamming tables into every inch, so there is plenty of room to move

Yep that is a pin ball and a Pac-Man game. They also have a pool table by the brewery tanks.

Surprising,to me they have a three-way license so they can sell spirits at their bar.

But we are here for the food. I knew it would push Pat’s comfort level because all of their sandwiches are complex builds. That is to say they offer a protein and other “stuff” to both enhance the taste and the size. Pat likes, basically no more than two things on his sandwich. Preferably meat and cheese. I think he would have enjoyed other sandwiches on the menu, but he decided on the pulled pork. 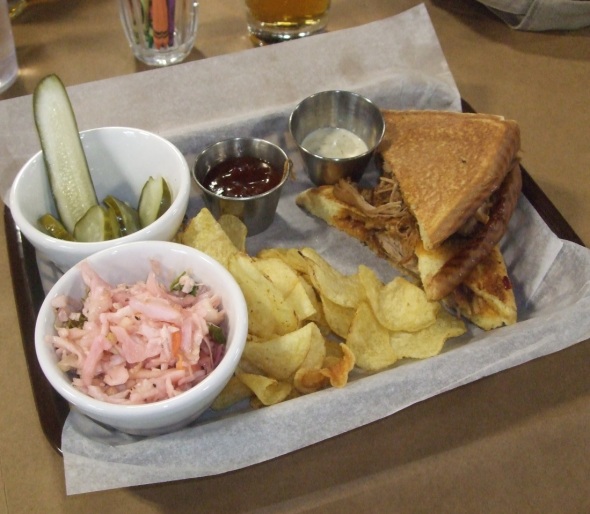 One comment on Pat’s reference to cumin as a herb. Most folks consider it a spice as it is a seed from a plant related to parsley. Like coriander is the seed from cilantro. He is right though, cumin has become rather trendy around here. 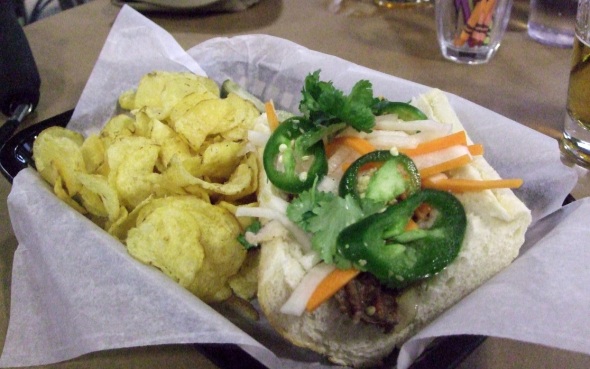 I got the Banh Mi. It was not traditional, but I think it held true to the intent. Pork and sausage spiked with the pickled veggies, and punctuated with fresh jalapeno and mellowed with cilantro. The mayo was very unassuming, as it should be. The portion of meat was not huge I would guess it to be in the 4 to 5 oz. range but the other “stuff” made it  a big taste. I think anymore meat would have been a distraction. All food,especially sandwiches should have a proper balance and I think this one achieved that.

Oh as for Pat’s coleslaw it was very good. It would most definitely rock on a BBQ sandwich. As for the pricing it definitely has a downtown price, but then it is downtown food. I really want to go back. I mean look at that menu. And pints of a great beer for $4.50. Well needless to say we both liked this place. I think this joint will be rocking Sobro when it gets warm,especially when they start pouring their own beer.

This entry was posted on February 11, 2015 by Benson. It was filed under Brewery and was tagged with Banh Mi, cured meats, lamb terrine, Monon Trail, pork belly, Pulled pork.