I believe this place opened just a few weeks ago. It is owned by the same folks that have Legends in Irvington, so I was confident that it would be pretty good. Since Pat is out in Cali for the next two weeks I was all by myself. I had planned on visiting this place at a later date and was actually on my way to a different joint when I decided to stop at the last-minute.

The place is nicely appointed with dark woods, leather seats and cozy booths. The large windows make for a very bright setting as well.

I was also quite impressed with the level of service. My server Katie was spot on. She was very knowledgable of the menu and not shy of venturing an opinion when asked. As a matter of fact it was her description of their special appetizer of the day that convinced me that I needed it. Normally I don’t get an app for lunch when I am solo. In this case the app was an arancia, a deep-fried polenta (oops, that should be risotto) ball, for $8.

I thought they were nicely done and with the creamy cheese sauce proved a tasty combo of flavors and textures.

For my main dish I opted for a shaved ham and Swiss sandwich. I know that sounds pretty mundane but it was hardly your standard diner fare. It featured Smoking Goose City Ham, a dry cured ham and orange marmalade with a fennel and apple slaw. They offer a choice of bread from Amelia so with Katie’s recommendation I went with semolina.

The bread was a good choice. Dense and herbaceous enough to balance the other strong tastes. The structure of the sandwich was really very delicate and nicely balanced. A hint of orange and apple, a passing note of mustard and the strong presence of ham. And of course the cheese just sort of hanging out to keep the ham company. A really good sandwich for $10. I may have wanted a more prominent presence of fennel but this was probably for the best. You know that meme about moderation.

I noticed on their beer tap they offer a brew called Diesel Oil. It is a Stout from Columbus Indiana and Powerhouse Brewing Company. Well I thought a good Stout would make for a nice desert. Well it does, especially when paired with a Chewy Fruitmeal Cookie.

They make about a half-dozen cookies and their Fruitmeal is an Oatmeal cookie loaded with dried fruit. It was an excellent bite for a buck. Now marry that with a Milk Stout and its touch of chocolate and coffee and you are on to something really nice. 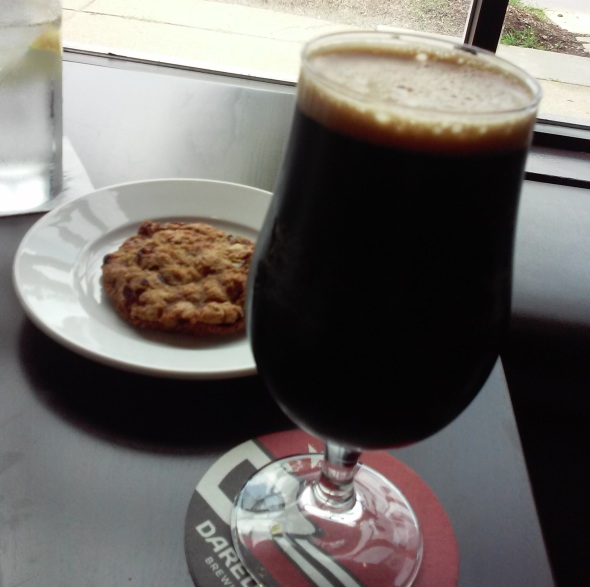 So this is Penn and Palate. So lets recap. Conveniently located in a newly gentrified locale on the near North Side. A swank and charming interior. Well trained staff. And finally an excellent menu that is well prepared and delicious. I think that this is the start of a beautiful friendship with this joint and this City.

This entry was posted on June 18, 2015 by Benson. It was filed under local sourced and was tagged with arancia, fennel, Herron High School, polenta, slaw, Smoking Goose, Stout.