Now isn’t that one hell of a name. From what I understand it is a meaningless set of words. The owners are from France and they use this as a term of endearment for their children. I think that’s sweet. Like an American calling a loved one snookums or pookie. As you can imagine it offers French food. It has been open for a few months, but I never could get Pat to go with me. As he said: “I do not want to eat at a place where I can’t pronounce the name.” So here I am, all by myself.

I am not overly familiar with French cooking. My experience consists of being taught French techniques and sauces in Culinary school and a few minor adventures in Quebec. I enjoy their love for food, and their influence has been felt throughout a great portion of the world. It just is not my first love.

I have heard a bit about the food here and it has generally been greeted with acclaim. The not too nice remarks have been directed at the interior design. I guess folks thought it should be like a quaint little bistro with small tables and an out-door seating area where you could lounge drinking wine and eating bread and butter. What they have is a small place with limited seating. When you walk in you see a hostess area directly in front of you. 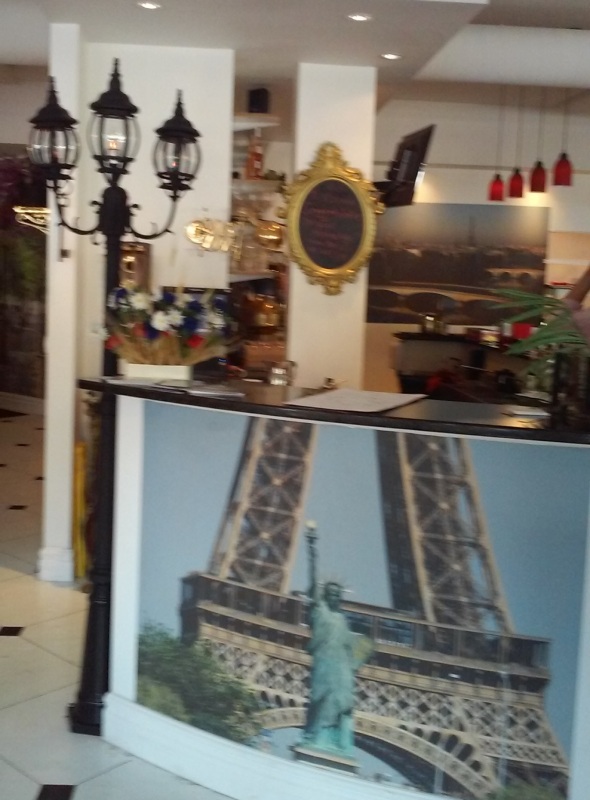 On your right as you enter  is a baby Grand piano with a bedazzled model of the Eiffel Tower, bedecked with silk roses serving as the candelabra. 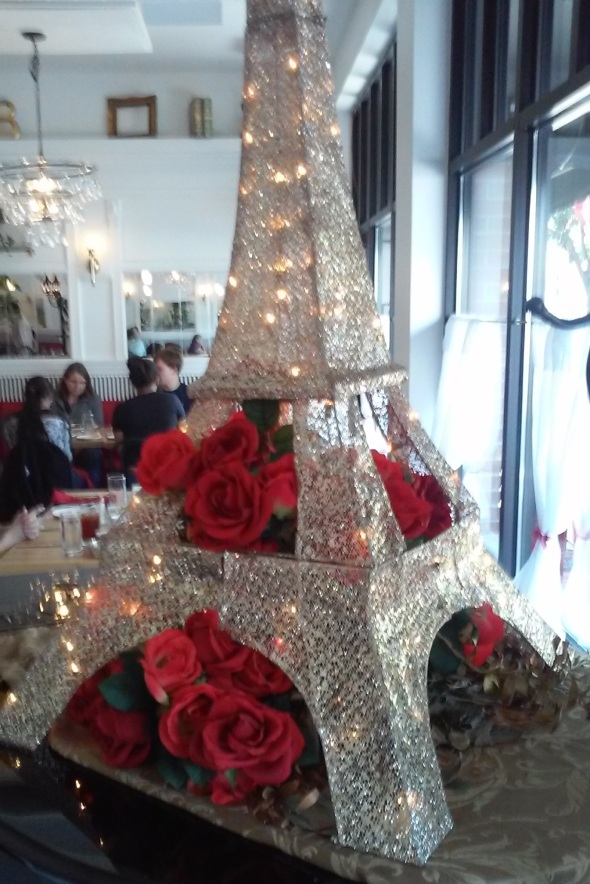 They have a nice menu, featuring crepes, charcuterie and galletes as well as sandwich type dishes. The galette that they offer is a Breton Gallete. A thin square buckwheat pancake filled with different savory components. The basic default dish is a Galette Complete. The pancake with cured ham and cheese and an egg. Their version features Gruyère cheese. Normally I would go there but they also have a Gallete Saucisse. Galette with sausage. Their version featured mirepoix with potatoes and a spicy mustard sauce.

The sausage was cut into discs and placed off to the side with a mixed green salad on the opposite corner. The dish was an excellent composition. The crisp pancake filled with a wonderful array of carrot, onion, celery and potato excellently prepared. The veggies had just the right amount of tooth. And when you wanted to alter the taste grab a piece of sausage or a fork full of the salad. The salad was your typical field greens with a small addition of radicchio, to add attitude. The whole salad was dressed in a slight oil and vinegar dressing. It was transparent enough to let the greens shine and the vinegar had enough sweetness to play off the excellent horseradish and mustard sauce.

I must say that this was an excellent dish. It was a classic and was done classically well. Also it was only $11. Now that is a bargain. Of course as I ate I became more desirous of some wine to help accentuate my lunch and decided that I needed a glass of Muscadet, for $12. But it was a great choice to go with the gallette. I think the reason I found it to be so darn good is normally I pay 12 bucks for 2 bottles of wine. I may have to review that. Oh one thing they may want to consider is the salting of the dish. I more I ate the more salt I tasted. It was as if they salted in layers and it all kind of fell to the middle. Also I must apologize for my pictures. Sometimes they look pretty good;other times, like now, no.

This entry was posted on July 24, 2015 by Benson. It was filed under ethnic and was tagged with bistro, crepes, french cooking, galette, Gruyere cheese, horseradish., iNDY, Massachusetts Avenue, Paris.