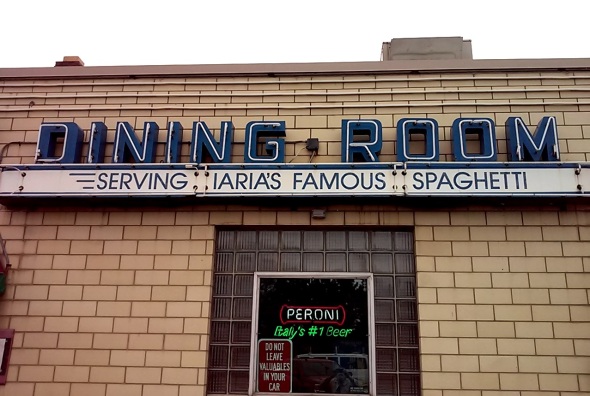 Iaria’s has been around since 1933. So don’t expect Fusion or Cuisine Minceur when you go. What you will get is Old School Italian dishes from very Old School recipes.

The establishment is composed of a dining room and a bar room that has several tables and booths.

They use plenty of glass blocks in their decor. I think the blocks are great. They were out of favor for a while but they are making a comeback,from what I hear. Iaria’s had them before they were cool. 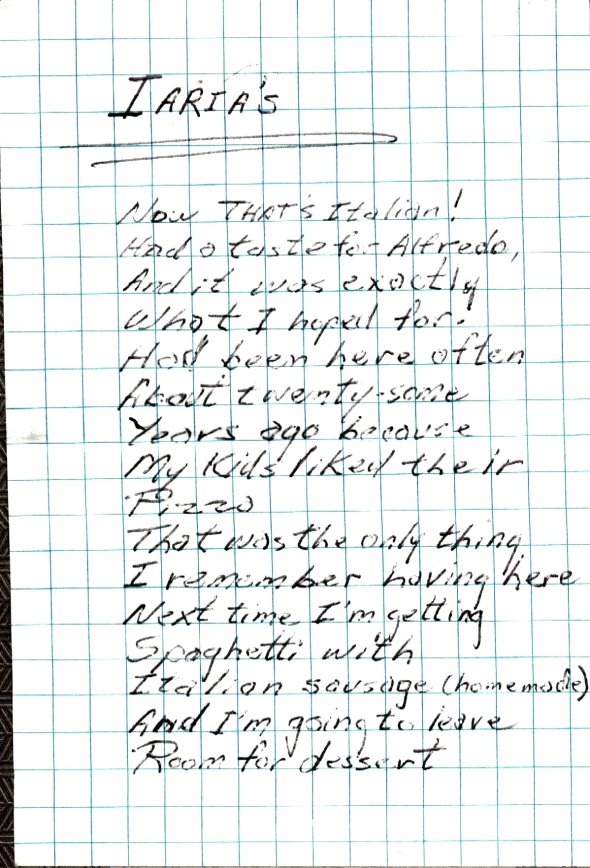 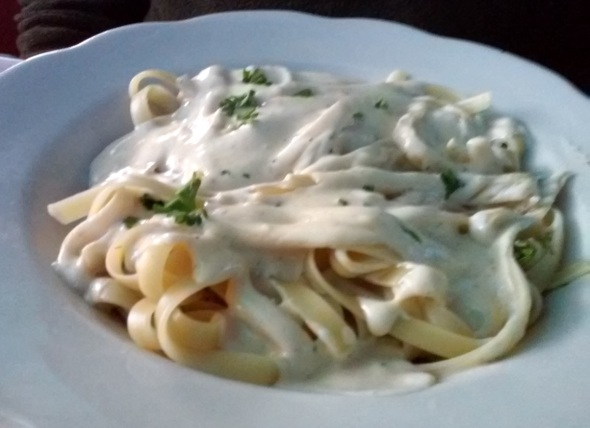 As soon as Pat and I decided on Iaria’s we both started having a “taste” for Italian. Pat Alfredo me Piccata,with capers. I had it on good authority they offer an outstanding version with grouper. Pat stayed with his first thoughts,after much rumination. As for me as soon as I walked into the aroma of fresh bread,tomatoes and garlic I knew it had to be red sauce and red wine.

Pat and I decided to split a half carafe of Malbec for $15, good for 3 glasses,but actually a bit more. It was really a pretty good wine choice. Pat decided on it because he abhors whites. I would have been happy with that or Cab. Once I decided to go red it was an easy decision for my lunch. Spaghetti with red sauce and a meatball. For a 75 cent up charge I got a link of their homemade Italian sausage. Both of our lunches came with a soup or salad choice. Pat;obviously chose salad. I chose a cup of the homemade Minnestroni soup. 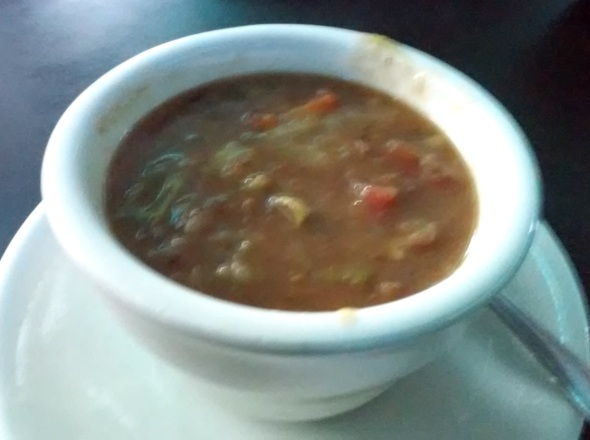 It was pretty good,not outstanding,but good. They also had a SOD; a chicken gnocchi. In the future I will give the SOD a try. As for the main course it was what you would expect from folks that have made sauce for so many years. While some red sauces are too sweet or too tart. Too thin or too thick. Or too much or too little. This was Goldilocks “Just Right”. The amount was enough to wet the pasta, enough leg to properly coat and just enough sweetness to whet the appetite and not sate it.

As for the star of the show,the meatball. It was expertly seasoned and nicely formed. It may have had a bit too much compaction for my tastes. But different boats etc. This brings us to the sausage. Now this was a wonderful sausage. A great fennel presence with a touch of crushed red pepper for some heat. I think the sausage stands right up their with any I have eaten

Both of are lunches were about $8 with soup or salad and a basket of homemade bread and butter. They also offer pizza and sandwiches. I think the most expensive lunch item was the Grouper Piccata for $11.95. They do a very brisk lunch business with lots of regulars and I can see why. Cozy surroundings,very good food and charming and friendly service. Worth a visit.

http://www.iariasrestaurant.com/  Since Zomato seems to have fallen down on the job.

This entry was posted on December 2, 2015 by Benson. It was filed under ethnic and was tagged with fennel, grouper, Malbec, minnestroni, Pasta, Piccata.