Fire by the Monon 6523 Ferguson 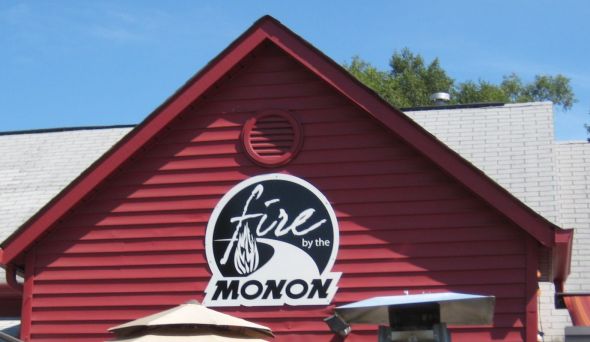 This place has been around a few years. Located North of the Canal in Broad Ripple it doesn’t get the attention joints farther South receive. It also doesn’t have the traffic and noise some of those other places get. It is a pleasant old building with very nice outdoor seating. However with the weather we have had dining out doors was not an option.

I think I have passed this place up because the menu was;for the most part; a bit typical of so many other taverns. The reason I reconsidered was a food blog I read that praised their Grueben sandwich. That would be  flash fried grouper on grilled rye bread with Swiss, slaw and Russian dressing. In other words a Ruben sub fish. As it turned out I didn’t even order that. 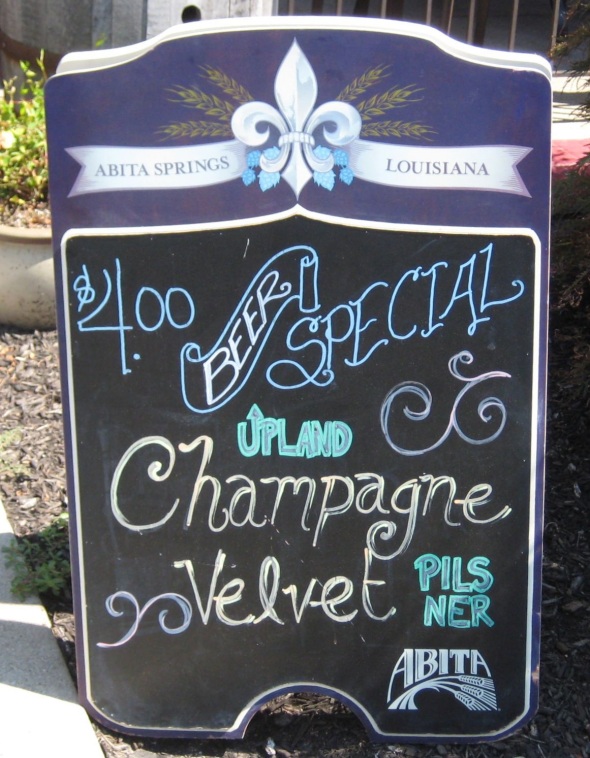 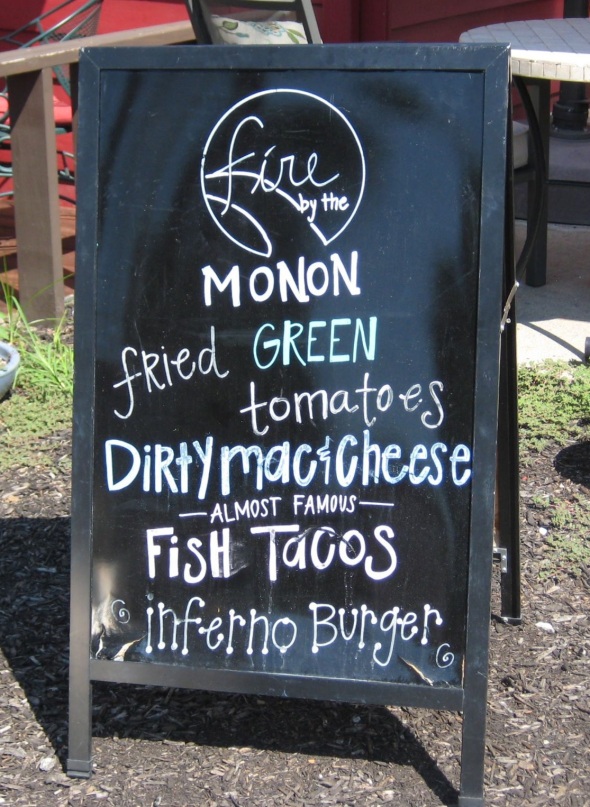 I didn’t order either the dirty Mac and Cheese or the almost famous Fish Tacos. I did order their Blacken Mahi, with side choice for $9.95. 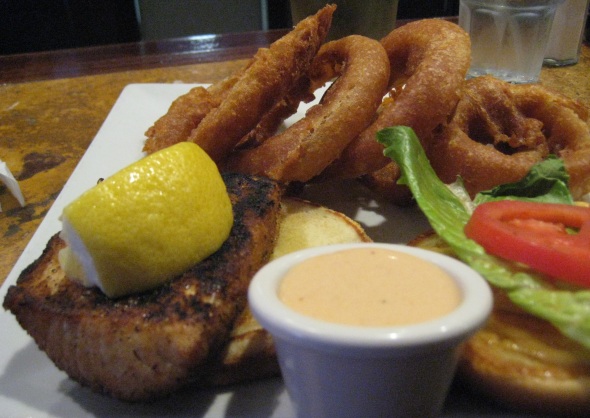 The fish was a very nice piece. The spice level was low so I really didn’t get the “Cajun” effect but it was flavorful. The fish was a bit overcooked, but with such a firm piece of fish it wasn’t a deal breaker. The onion rings were plentiful and tasty. However the batter was pretty salty for my tastes. Of course I did manage to finish them so I guess they weren’t TOO salty. I think I would order it again just with a different side. The rings were really filling. 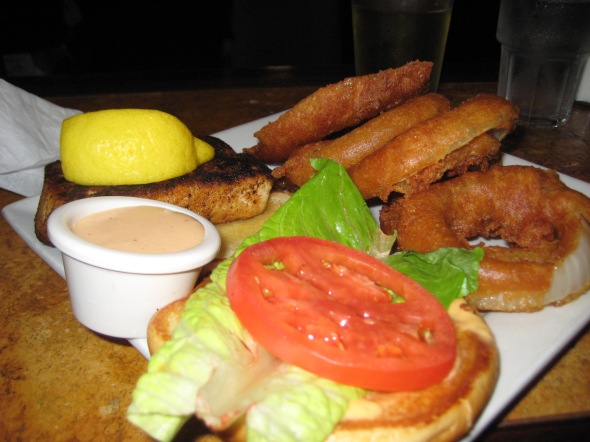 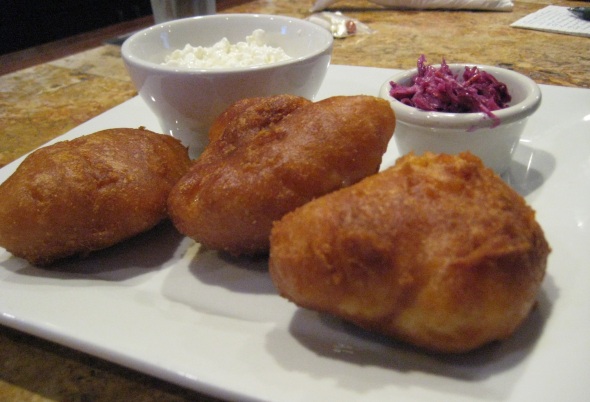 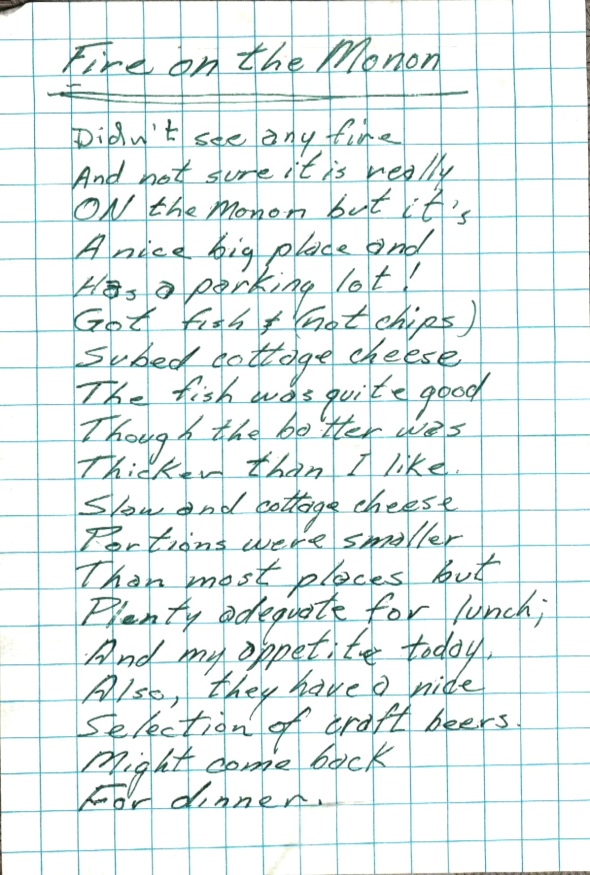 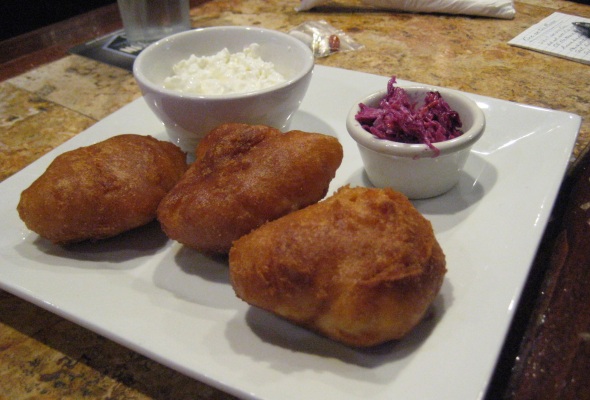 The size of the fish on Pat’s plate reminding me of another place we went to. They offered big chunky pieces and the batter was so thick it didn’t crisp up all the way through and the fish was “steamed”. That wasn’t the case here but the batter was as salty as my onion rings. Also I was able to taste a piece of the cod and I though it was very well done.

I also tried one of the $4 beers. That particular “flavor” of Upland I have wanted to try for a while and this was my first opportunity. I found it to be a very crisp and refreshing beer; perfect for the days of August. I can see my self coming back here. Sitting outside having a beer and a Grouper sandwich. It doesn’t overlook the Canal and it doesn’t have the people watching available South but it looks comfy and shady,and they have a good Draft menu.

This entry was posted on August 4, 2016 by Benson. It was filed under taverns and stuff and was tagged with Broad Ripple Village Indianapolis, Cajun, fish and, grouper, Mahi.