If you’ve gone to either a football game or a baseball game you have probably seen this place. It is close to both Lucas Oil Stadium and Victory Field. So for anyone wanting to grab a bite before a game this would be a logical starting place.

Well as the man said now is time for Savor Downtown. This is another marketing ploy to get folks out to eat more. It is just focused on Downtown restaurants; unlike Devour which covers all of the city.

Basey’s menu has few surprises. It appears that they may make their own Mozzarella sticks but neither of us were hungry enough to find out. One item they offer is grouper. They do it grilled, blackened or deep-fried. I prefer it blackened but so many places just dust the fish in “Cajun” spices and grill it. I got mine just plain grilled and they did a very good job with it. 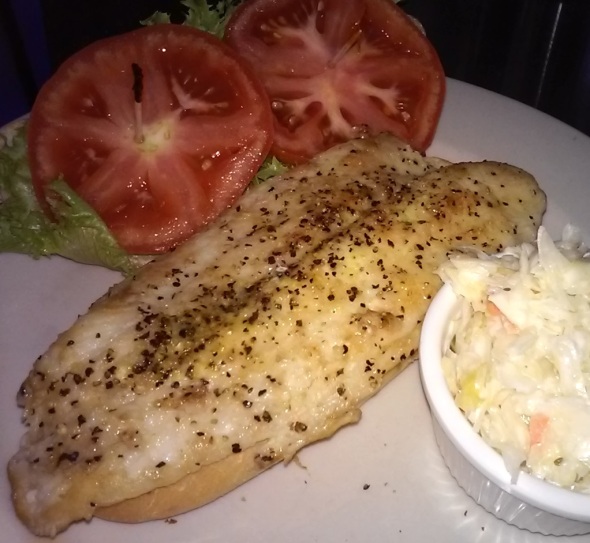 Some folks have a tendency to over cook fish but this one was cooked just right. I couldn’t eat all the roll because it was very chewy and tough to bite through. Not sure why that would be. Sometimes a microwave will do that to bread, but I couldn’t see any reason to nuke the bread. If I return I can get it on a salad.

You get a choice of side with a sandwich so I ordered coleslaw. Of course. And it was pretty good. It brought a nice crunch to my lunch.

It was a good lunch and the service was solid. There was just one server/bartender working and she was very busy. She had a big party working when we walked in and customers just kept coming. She did a nice job with it all.

This entry was posted on March 2, 2018 by Benson. It was filed under taverns and stuff and was tagged with Burgers, grouper, Lucas Oil Stadium, Mozzarella, Victory Field.