Well as the man said this week is Tenderloin week and several bars and restaurants chose to participate. Of the few we had never been to this joint appeared to be the most interesting.  It is a neighborhood dive. The sort of place that draws the same crowd with karaoke on Wednesday night and live music on weekends. As a matter of fact Henry Lee Summers played there a while back. If you recognize that name you are probably over 50 and from Indiana. If you don’t never mind.

One thing we did not consider was the smoking. In Marion County smoking is no longer allowed in public places in Johnson County its smoke em if you got em. It wasn’t as off-putting as I thought it would be. The aroma was present it just wasn’t so bad that it ruined my visit. However as Pat said if I came back it would be to sit outside.

This place hand cuts the tenderloin and then cubes them in a cuber before they bread them by hand. So the sandwich is legit I just wasn’t in the mood for a hunk of fried meat. Their menu is small and predictable and nothing really jumped up and said “pick me”. I decided on a double bacon cheese burger; 86 the bun and garden. I wanted just the meat.

It was nothing spectacular. Two half pound beef patties topped with cheese and 2 nice slices of bacon. To me they were over cooked. I understand most joints are leery of not following Board of Health guide lines but I think 160 degrees is allowable. No matter; it was meat and it was filling. 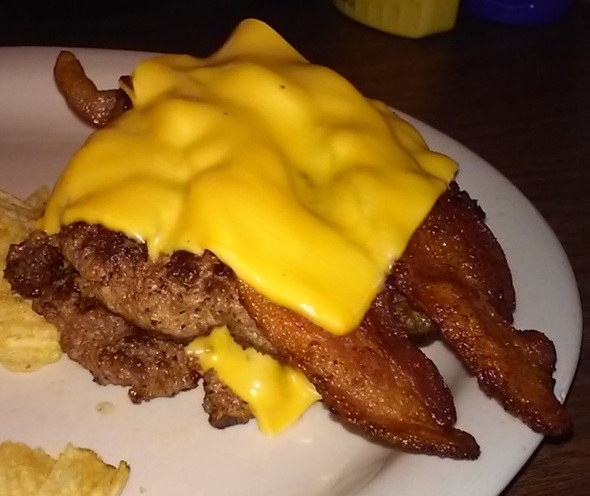 Like most bars this joint has a Golden Tee golf machine and next to it is the coolest cocktail table.

I enjoyed my self because the folks were friendly ( small Indiana town). As a matter of fact we met a fellow named Tom who worked for the city of Greenwood and has for 40 years. He was one year from retirement and on vacation. He decided that we were such nice guys that he had to buy us lunch. That was especially nice. If you are in the Franklin area and want a cold beer and a bite and you don’t mind smoke check out Whit’s Inn.

Thanks again Tom; enjoy your vacation.

This entry was posted on April 26, 2018 by Benson. It was filed under pub grub and was tagged with bacon cheese burger, breaded tenderloin, Franklin Indiana, Henry Lee Summers.