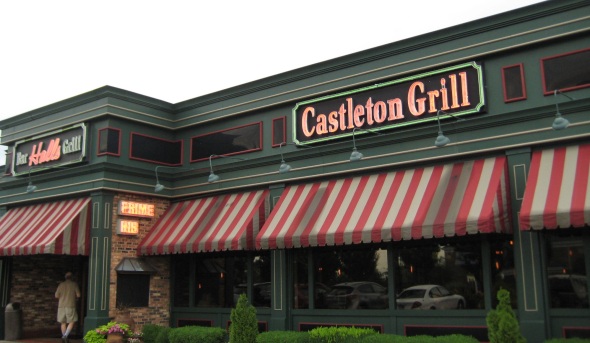 This week is Burger Week in Indy. Several restaurants have agreed to offer select burgers for $5 with a part of the proceeds going to Second Harvest Food Bank. The trouble is we have already been to the Independent joints that are participating. I did find one we haven’t been to that is local and that offered a relatively simple burger. Naturally when we got there Pat decided on a fish sandwich.

This Grill offers 3 fish. Cod, Faroe Island Salmon and Mahi. You have a choice of how your fish is prepared. Battered and fried, blackened or grilled. A burger is no competition for Faroe Salmon so I ordered blackened Salmon. For sides you can get your typical fries,chips and slaw they also offer an Andouille sausage potato cake.

Well the both of the fish portions were small; 4 to 5 ounces. The mini hoagie roll was cute but my potato cake side was bigger than my fish. As far as taste goes it was pretty underwhelming. My fish was pretty to look at but was bland; even with Blackening spice. Salmon is a robust fish and should have a taste to match. As for the potato cake it was pretty boring as well. A “mushy” texture with no discernible evidence of sausage in it. I guess the corn relish on top was supposed to offer taste and crunch. 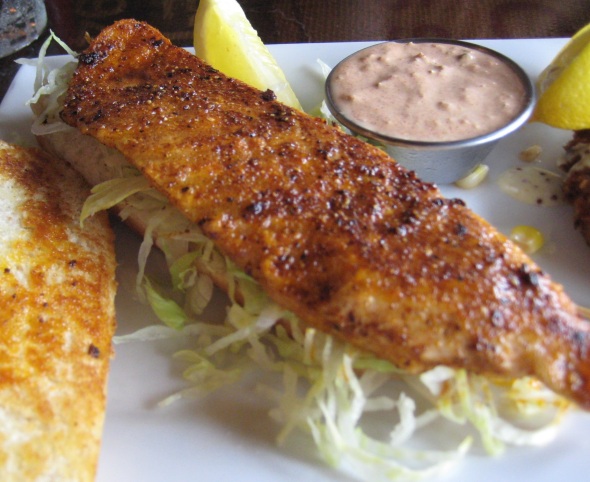 There is a pretty common saying in the Restaurant biz. “People eat with their eyes” That is just an admonition to make every plate attractive. Well the dining may start with the eyes but eventually the customers will open their mouths. Make sure the statement your food makes is something you want to say.

So Pat’s Cod was $9 and my Salmon was $10. Craft drafts are $6; in other words typical Castleton prices. There are better joints to eat even up in this area.

Pat and his wife, Fran went to Pure Food over the weekend. There he had a Caprese Panini sandwich;and it so impressed him he “craved” more. Their Caprese is fresh mozzarella; roasted red pepper, arugula and balsamic vinaigrette all on cibatta. Now seriously. What is there not to like ? He did add andouille sausage. Which sounded like a great addition. I didn’t taste the sandwich but I did try a piece of sausage. And I was not real  thrilled;neither was Pat. It had little flavor and I thought the texture was a little too coarse. His side choice was green beans and potatoes. He thought it was good, not great ,but good. I went against my first thought and ordered a Roast Beef cibatta. Sliced beef,arugula,red onion and the ever popular lemon basil aioli. Well I hate to say it,but it was a wee bit disappointing. It was well made and it held a copious amount of beef. The trouble was it was Deli style roast beef. Overall it was flat. Average meat, no texture, no crunch, no zest. Maybe thicker onion. Maybe pickle the onions and maybe change the mayo to some sort of mustard. That’s my opinion; something everyone has. I really like this joint. One average taste experience doesn’t make for a bad “review ” Oh I nearly forgot my side. I tried their SOD; creamy potato and leek. And it was top notch.I enjoyed it very much. As for the pictures; again I screwed up. We started eating and then I remembered to take the pictures. Pretty much par;don’t you think? 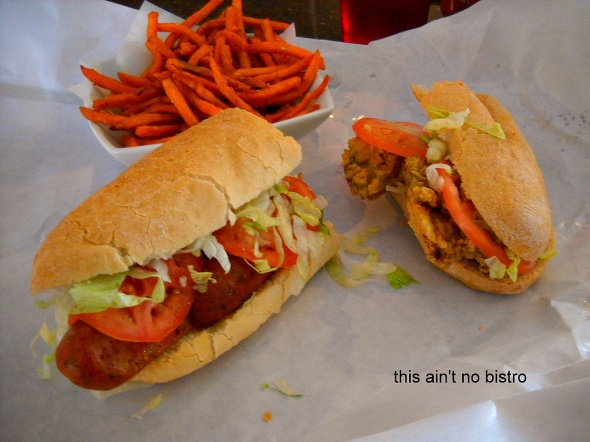 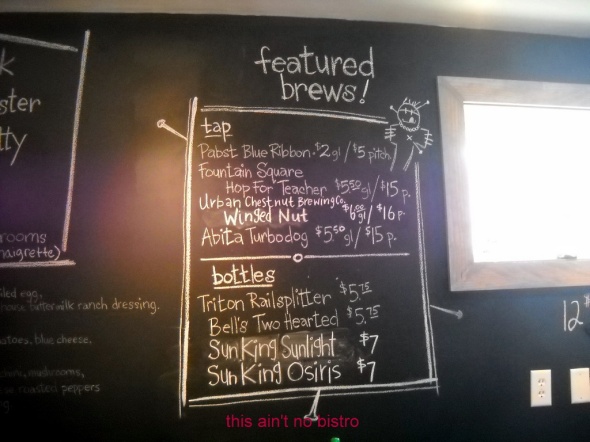 To anyone who has been to New Orleans, you know that the ubiquitous Po’ Boy is the quintessential handheld treat from the city noted for its food. In Indianapolis, you will find an authentic example at B’s Po Boy in Fountain Square. It is located on Shelby Street across the street from the Fountain Square Brewery; which is quite convenient. They buy their bread direct from Leidenheimer, a New Orleans bakery, and it is the real deal.A little crisp on the outside and a little chewy on the inside, a nearly perfect bite. Some of their filling options are not typical of what you would find in Louisiana. They offer barbecue pulled pork, chipped roast beef (which they cook off themselves), sliced ham (which they don’t cook themselves) and homemade chicken salad with a dressing of mayo and Creole mustard. They also offer the usual suspects; andouille sausage, fried shrimp, barbecue shrimp and fried oysters.

I ordered a half andouille sausage and a half oyster. Pat ordered a half ham and we both shared an order of sweet potato fries.The andouille sausage was really quite good, good spice background without being overwhelming. What I couldn’t figure out was the fact they get it from Ireland. I never met a Cajun leprechaun before, but hey, this is an international economy. But as good as the sausage was my hands-down favorite were the oysters. They buy fresh select , lightly bread them and perfectly fry them. On the other hand, Patrick’s ham was merely okay. It was just a good deli style ham.The sweet potato fries, although a “store-bought” product, they were top-notch shoestring cut taters.They dress their sandwiches with shredded lettuce, tomato, pickle and mayonnaise. But obviously you can eliminate anything you want. They also offer red beans and rice and chicken, sausage gumbo; as both a side $3.50 or as an entrée for nine dollars and $10. Their sandwiches are priced at six dollars for a half and nine dollars for a whole. It seems more than reasonable, because they don’t seem to skimp on the portions. And if salad is your thing , they also offer three entrée salads. I’ve no idea how big they are but they seem to come loaded with stuff.They also offer scratch made beignets. If you are not hip to beignets just think Hoosier fried biscuits, only lighter.

As for refreshments. They offer both bottled and draft beers. And since they are right across the street from the Fountain Square brewery what would be better to wash down andouille sausage and fried oysters, then a cold pint of Hop For Teacher;I think the name says it all.I know this would hardly qualify as a heart healthy lunch; but if I have but one life to live let me live a sated one.<a