I am not sure how we ended up here. I was checking on a joint that Pat mentioned to me and in anticipation of that joint not being open I listed this as an alternative. I guess that was why we ended up here.

It was a very attractive place. High ceilings, chandeliers, even an upstairs. I can see it as a fine dining French Restaurant.

As Pat said the special was fine. The aforementioned special was blackened prime rib Caeser salad. I agree with Pat is was fine. A tasty lunch for 14 bucks. Maybe it was the spirits of the former Haute Cuisine in the atmosphere but I am going to pick some nits. The salad was too lightly dressed for my taste. Salad greens should not be soggy with dressing but I would like to taste the dressing. Also the medium temp was more mid well. That comes from buying a cooked to rare ribeye. I do not agree with that. I think any kitchen with an oven should be able to cook a whole ribeye; or as some folks call it a whole Prime rib. However even if the meat was rare I do not get why they were unable to cook it to medium. I have my suppositions but they are just that, guesses.

Now the age old question. Would I buy it again? Of course. It was still a decent meal. Tasty and filling I just would have prefered a better execution. The fat was crisp which I enjoy and there was a slight spiciness which is always nice.

As a grand finale how about a fancy Manhattan. That makes any meal complete.

The first District Tap opened up on 82nd street and then last year they had the opportunity to open downtown and I think it will be a good fit. We have not been to the first one so the whole experience was new to us. They have a very nice menu with several side options. Not just fries or tots. That is nice to see.

I wasn’t really sure what I wanted to eat but I was pretty sure it wasn’t a sandwich. Then I noticed that they offer 2 wood fired pizzas on the appetizer menu. A Margherita or a sausage and pepperoni both $11 but on Wednesdays they were discounted a buck. Well the one thing better than pizza is a pizza on sale. I decided on a sausage and pepperoni pie. I also thought I needed some salad to precede it so I opted for a side Caesar for $5.

I was expecting a small “side” salad not this larger entree size bowl of romaine and dressing. It was a very good salad and an excellent bargain. I was even more amazed when my appetizer flatbread pizza arrived.

This pie was easily 12 inches. Big enough to be an app for a four top at least. Now only was it big it was good. Thin crust, tasty sauce and some wonderful anise loaded sausage from Gordon Food Service. Great pie and it too was a great bargain. I only have good things to say about this joint. Food was very good and so was the service. You guys should be proud of the job you are doing especially in the times we are in. Thanks. 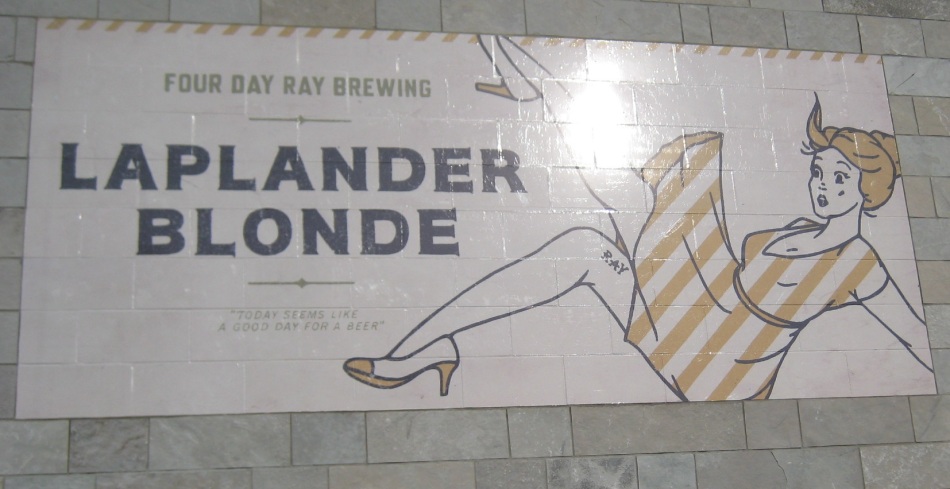 This joint brews beer. But it is more; it is a Gastropub. I have seen that word around a lot more recently. That led me to believe it was possibly more than a made up word. Like Gastronaut. I looked it up on Google and this is what I discovered.

BRITISH
Yelp even offers a list of the “best” gastropubs in Indy. According to the list I have eaten at a few of these places and I hadn’t even noticed. I am guessing that if their menu uses the words confit and or aioli you may be at a gastropub.  What ever the joint calls itself as long as the food is done well that is all that matters.
As I mentioned this is a brewery. The picture I started with is on the outside of the building in the parking lot. The place is huge and appears to have been constructed just for this operation. They have an upper level  that allows them to seat more than 200 eaters and drinkers.

The sandwiches are in the $10 to $13 range and the beers are $5.50 per pint. The going rate at most breweries; and most joints in Fishers. A cautionary note about their beer flights. They serve the flights in 5 ounce pours; as many as you would like at $2.50 each. I think that is a bit high for anywhere. 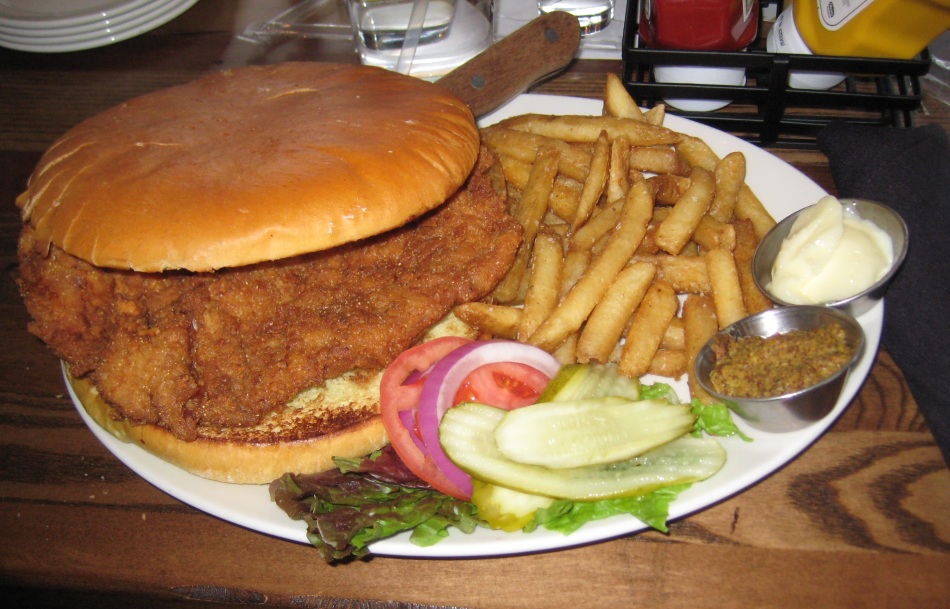 Since Pat got the BT I opted for a burger. I just feel better when we order different things. I noticed they had a double burger available which made me ask the server how big a patty they serve. He had no idea. He just said they were “big”. Hopefully he will learn his menu soon. I ordered my burger Mid-rare. It came out close to medium. They use a 2-year-old cheddar from Fair Oaks Farms as one of their cheese choices. That is what I ordered and it was delicious. As a matter of fact the burger was pretty damn good, overcook and all. I was also impressed with the fries. They had a crunchy exterior and a soft interior and the sprinkling of coarse salt really made them exceptional. For what it is worth the burgers appear to be 6 ounce. 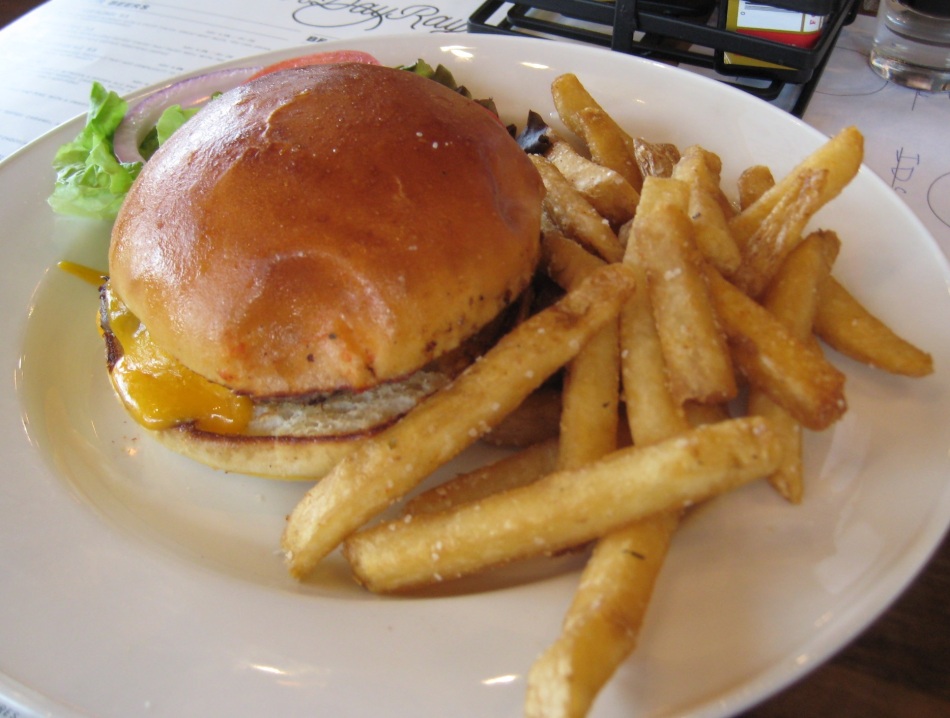 So I wouldn’t mind going back but I agree with Pat about the distance. Maybe when the weather warms again.

I checked out the website and menu on this place several weeks ago. It seemed a little pretentious and a lot expensive. As a matter of fact, Pat told me he and Fran stopped in there after a bike run and was turned off by the prices. Now it appears they have streamlined the menu and lowered prices. It is still a swanky joint with a lot of attention paid to fruit reductions and such. It also has a huge draft beer selection and one of the coolest wine systems I have seen. When you walk in, you are greeted by a host at a station made of beer cans.

To the left of the host station is a large dining room and to the right is the bar and more dining room. The bar has two beautiful draft systems and the aforementioned wine pour station. 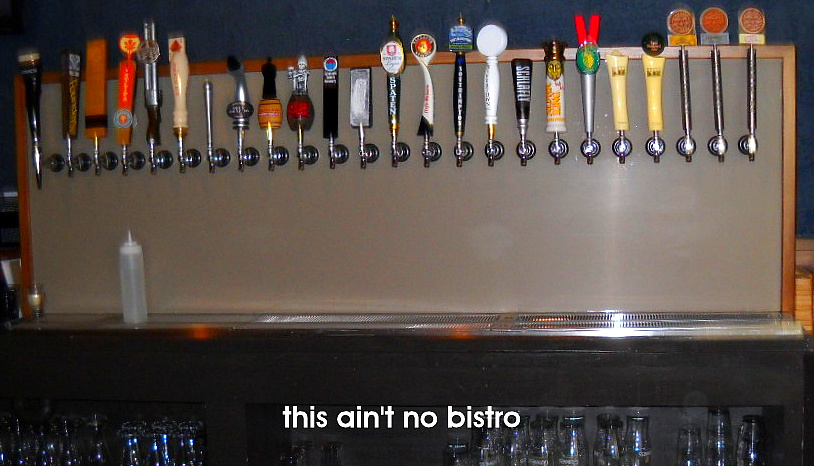 As I said earlier, the menu appears to been trimmed somewhat, but still leans a little to the trendy and chic. Pat ordered Caesar salad with fried chicken and dressing on the side. It was a normal amount of chopped romaine lettuce with five oddly shaped pieces of chicken. Odd because it looked like index finger sized Lincoln logs. Pat thought the chicken was a little dry. He was not a big fan. It was served with a cute little bowl of flat bread points and Parmesan cheese crisp. The only remark he had to make about the crisp, was that it was more a Parmesan cheese non-crisp. As for the dressing it was house made. Thick, creamy and rich with anchovy and Parmesan cheese.  Now Patrick is not a big fan of anchovy so he was not too thrilled. If you dig anchovy, as I do, you would probably enjoy it a lot. The first two tastes were delicious. Even with the heavy anchovy, you can definitely taste the Parmesan cheese. However, after a couple of bites you can see why it is a dressing not a dip. It needs to be tossed with lettuce. It is still a great Caesar dressing. Pat thought it was satisfactory just not worth $13.

I was torn between their rather funky selections of flat breads and one of their unique sandwiches. Their house burgers are a mixture of shredded potato and ground beef. Interesting. They also have this one.

Now that would probably be either fantastic or dreadful. I can’t imagine it would leave an eater with no opinion. I decided on a slow roasted pulled pork with the bourbon glaze on a pretzel bun. The pork is tender and slightly sweet from the bourbon glaze.The glaze worked with the pork, allowing you to better taste it. Not mask it like some sauces do.Their selection of sides is rather unique. I chose couscous salad.

Couscous, avocado, black olives, red and yellow peppers, tossed in olive oil. The veggies were small diced and not really plentiful but it was still a very tasty salad. 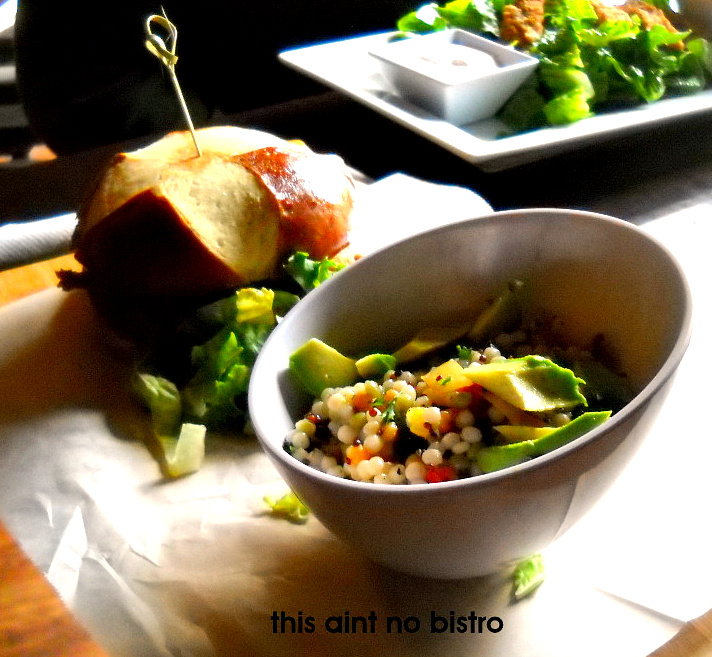 It is a swanky joint with swanky food, swanky dishes and a big selection of beer. One last picture of the last thing you’ll probably see,just before you leave. 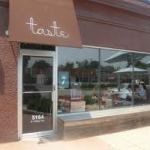 Go for breakfast stay for dessert.Go for lunch stay for dessert.What I’m getting at is they bake really well.Pat and I stopped there for lunch and we tried a salad and sandwich;and 4 of their bakery items.A Caesar salad is pretty universal;Romaine,Parm and croutons.In this case the parm was shredded and the dressing was homemade;and delicious.I tried a grinder sandwich.Theirs is a baguette filled with cured Italian meats,provolone and tapenade.The combo of meats and tapenade meld into a tasty salty flavor spiked with a wee bit of mustard in the vinigrette.I think the fresh tomato was supposed to add a little sweet to balance the salt;but the time of year probably hurt that.But the side of cucumber slices in a sweet vinegar did the job well.There’s one more san I want to try before I expand to their strata or quiches.And contrary to Playboy Magazines admonition Real men do eat Quiche;especially if they are well made.And if their confections are any indication their ovens are golden.Try anything,I’m confident everything is well made.But don’t forget the chocolate Torte;try that no matter what else.