When we can’t come to a quick agreement on destination we know we can always agree on the ever popular, hardly controversial “dive bar”. Pat, because the food is simple and me because the beer is cheap. This place has been a bar for as long as I can recall. For years it was Bud’s Lounge. Bud’s closed a couple of years ago and Fat Cat moved in. Fat Cat was originally down the street at 38th Street so they have some experience in the bar business.

Their menu is pretty common with a bunch of frozen apps and a few basic sandwiches and pizza. We ordered a side of mushrooms to start our meal off for $5. They were pretty good. Like most things frozen apps are not all the same. Some ARE better than others. These were better than average.

Of course a picture should be taken before you start eating. Makes for a more professional effect.

I was leaning toward their fried catfish dinner but our great bartender told me it goes from $8 to $6.75 on Fridays. Unfortunately they stopped selling them with hush puppies. Their customers weren’t eating them. There is just no accounting for some folks tastes. So I went for the pig in the form of a grilled tenderloin.

This was an exceptional piece of meat. This was no light weight “fritter” this was an 8 oz. slice of pork loin that was pounded out and cooked really well on a flat top. Tender and moist with good flavor and just the right amount of chew.

So we really enjoyed this little place. It had good food, exceptional service and Domestic bottles were a buck and a half. So for 2 sandwiches, one order of mushrooms and three beers our tab was $25; with tax. That is a value. I will be back on a Friday and try their catfish special; even without puppies.

Pat picked this place. He learned of it from his cousin, who is a regular. That is one of the interesting things about taverns. Their regulars usually visit more often than a regular at a dinner house. When you go to a dinner house you go to eat. Same can be said for a lunch place. When you visit a tavern you can eat or drink. Taverns also have a bunch more appetizers than a  restaurant. So the occasions to go to a tavern are more numerous. Pat mentioned that this joint was previously named Harry C’s. I have never heard of that place either.

We started out with some fried pepper jack cheese cubes. For some reason I neglected to take a picture. These little things were very good. Lightly breaded and cooked perfectly. I was really surprised that they weren’t hand-made in the kitchen. I have had these before and they weren’t nearly as good.

They offer a fish and chips platter with a choice of walleye or catfish for $7.50. Either fish will get you fries, coleslaw and tarter sauce. I opted for walleye, because it is a good white fish and you don’t see it around too often.

I liked it. It was a good portion of fish and it had  very tasty breading, Also the coleslaw was house-made and the amount of fries they give you is reasonable. Some places think it is necessary to serve up more french fries than 1 human can eat. I would like to see them offer an extra piece of fish for an up-charge. I could have handled another piece of walleye. On Fridays they offer an all you can eat fish and chips for 12.95. I think that is the price.

I like this little place. Good food and great prices. For the bonus their special that day was $2 Domestic bottles. They offer several draft beers and a  Craft brew cost $5. If I lived closer I would try that Prime Rib dinner myself

I know. Another bar. We have been going to several of these lately because we can’t find any Independent lunch joint that we haven’t already been to. I love bars, taverns, saloons; what ever you want to call them but sometimes we want something different. Actually we came here by a happy accident. The joint we were going to visit had abruptly changed their hours and stopped serving lunch during the week. The Thirsty Turtle was a place I have been by a few times and never took the time to stop.

This day they were having a very busy lunch. They were selling 50 cent wings, or maybe it was wings for a quarter. They do a wing special on Wednesday and Thursday, 50 cents one day 25 on the other. Either way it was crazy. Especially since the kitchen staff consisted of one young woman. I sat at the end of the bar and was able to see all the action in the kitchen. The work is strong in this one. She did an outstanding job and I had a grand time watching. 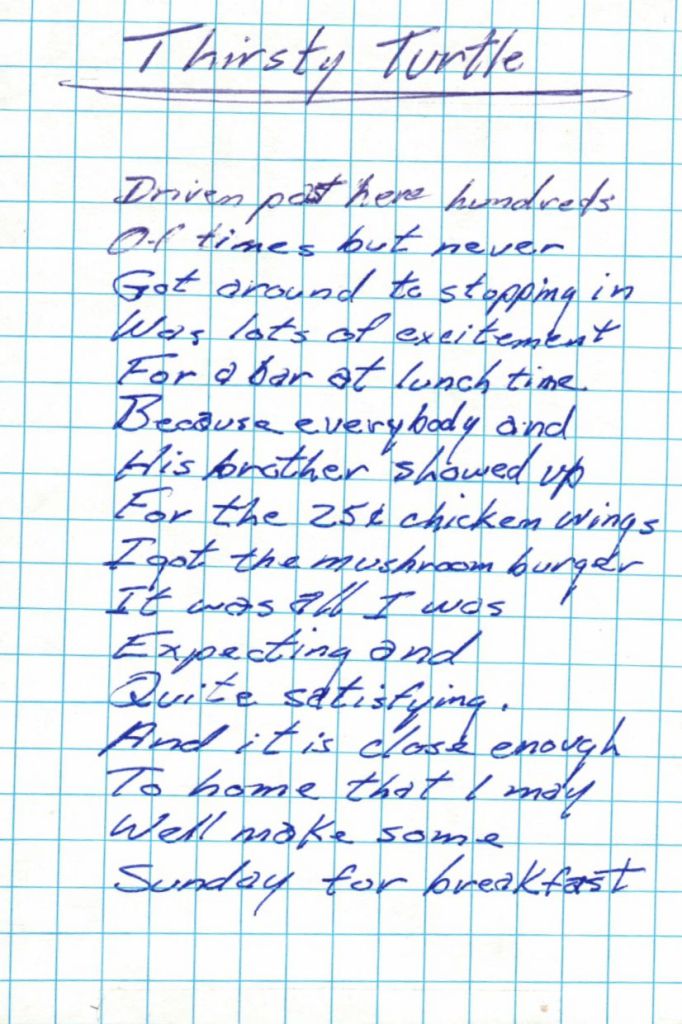 I wasn’t in a burger mood so I opted for catfish. I decided on “blackened” for two reasons. First I didn’t want to compound the kitchen’s fryer load. Also I was curious to see how they did it.

They had a nifty little stove and griddle combo featuring a 4 eyed stove and oven as well as the flat top. So the fish could have been prepared in a skillet or on the griddle. As you can see from the color of the fish it wasn’t really blackened. It was cooked on the flat top and seasoned with a “cajun” spice. It was still nicely done and I liked it.

I really enjoyed our lunch. It was nice to see some real kitchen work. It has been a while. It isn’t close to me but I would like to go just because the people are just so darn nice. Oh and the prices are fantastic. The food totaled $15 and my Lite bottles were 2 bucks and Pat’s Rolling Rock was $3. You won’t find that Downtown.

I wanted to come here so I could sit out side. Today was a pleasant and bright day, without the oppressive humidity ,usually associated with a Hoosier July. Pat said we already ate here, pre blog days. I don’t think so.

Even though they have Distillery in their name they don’t distill any alcohol. They do have a decent cold beer selection and some good food. They aren’t heavy with Cajun fare, as the name would imply. They do offer a nice selection of smoked meats, crawfish etouffee,oysters,catfish and a sprinkling of blackened dishes. Pat has been her more than a few times, so he knew the menu pretty well. They did have 2 new offerings. A French Dip and a house smoked brisket sandwich. Their sandwiches come with a small side of slaw and fries or home-made chips. He opted for the Dip, with chips for $8.50. He also tried a cup of Lobster Bisque for $4,25. 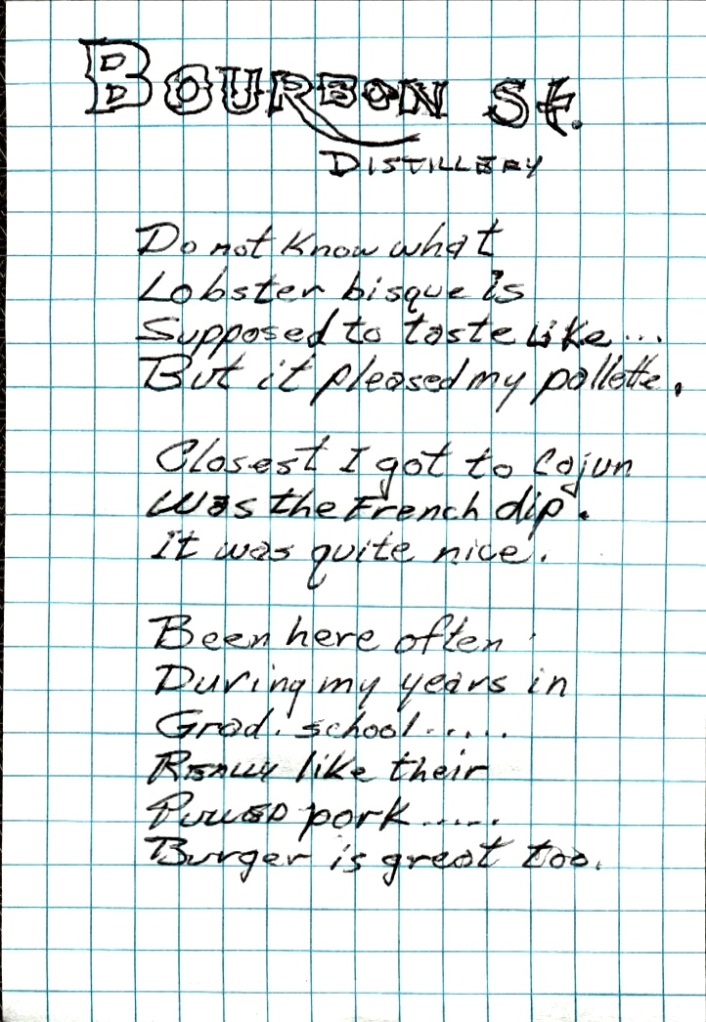 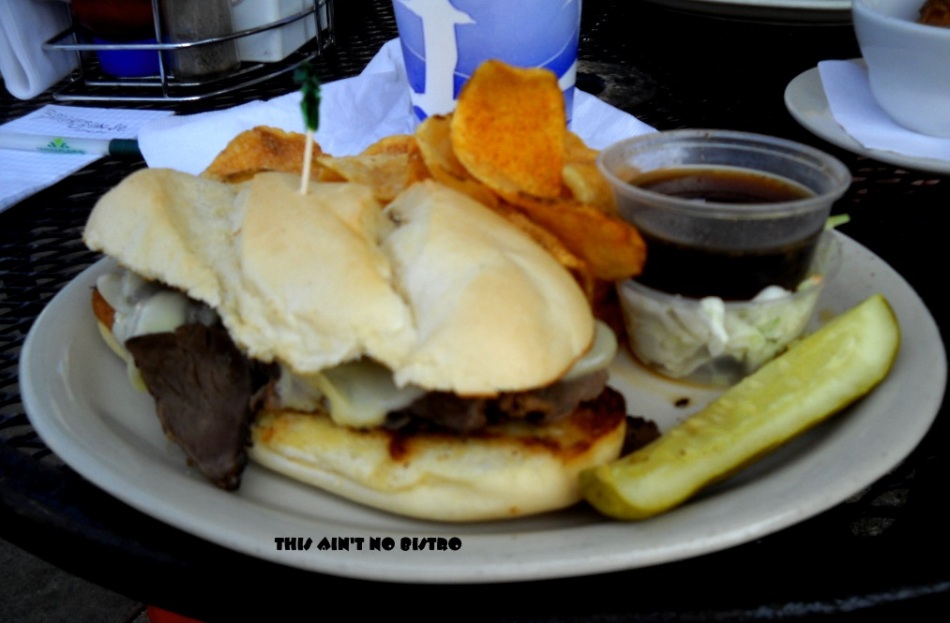 I don’t think the angle of Pat’s picture did the presentation of his French Dip justice. The amount of chips was huge. And they were very well made. They buy them already cut and fry and season them in-house. Good seasoning and great execution.

The Blackened Trout was a lunch special. It came with etouffee, slaw and garlic toast for $8.50. The puppies were an add on for $1.25. The fish was very good. I found their blackening interesting. Different to what I am used to. But in fairness most of my blackened meals have been made with my own spice blend. Not better or worse, just different. This spice mix was light on the front end and little stronger in the middle and with a nice finish. Not at all excessively hot. It fit well with the fish. The etouffee was good as well. Abundant, which is good because a measly cup of etouffee is just a taste. The slaw was so so, but it did bring a nice texture to the party. One thing I am not happy with is my picture. I should have had the idea of rotating my plate so as to good a good shot of the fish. A blackened piece of fish is beautiful. Dark and glistening with a slight sheen from the oil or butter. 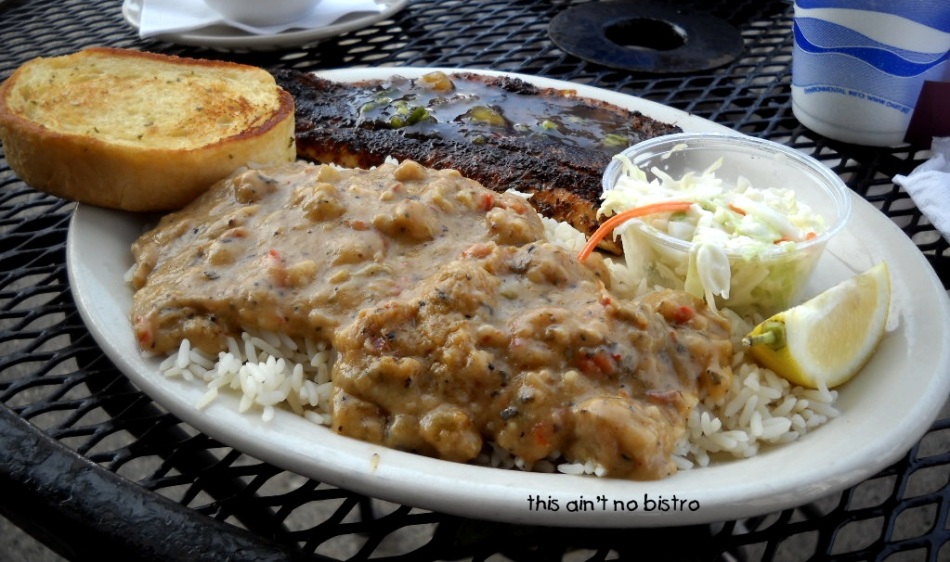 They also have a list of Po’ Boys. Now that is next on my list a Blackened Catfish Po’ boy. Seriously I can’t think of any reason not to go there. Good food, good pricing and good service and a nice out-door seating area and an upstairs balcony. What more can you ask for.

Ode to the Hush Puppy

I think that I shall never see

a treat as tasty as the Hush Puppy.

Its shape is compact and really quite spherical.

It’s flavor is sweet and truly most lyrical.

Its reputation has been tarnished and maligned for years,

but the taste of one can bring a grown man to tears.

For all you folks who like a plate of fried fish

you can’t help but grin when puppies are added to the dish.

Be it catfish or cod. Crappie or gill

You must admit hush Puppies just add to the thrill.

So whether you eat in a restaurant or pub

If they don’t give you hush Pups your fish is just grub.