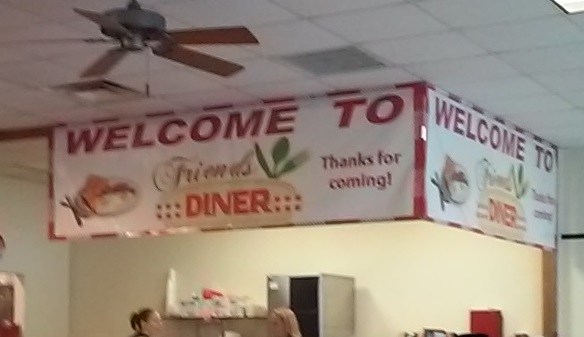 I know I am always complaining about the dearth of meat and threes around here. Well we found one. Shame you have to drive to Whiteland to visit. Actually it is a meat and three for dinner and a meat and two for lunch. In either event it is definitely a place to consider. Drive and all.

I am not sure how long they have been open. Pat came across it more by accident than intent. They do not have much of an electronic presence so don’t look for a menu. However I believe they have a new menu so that may change.

All of their dinners are mostly $9.99 and come with 3 side dishes. The luncheon plates are $6.99 and $7.99 with a choice of 2 sides. They offer a nice variety of sides even including asparagus. 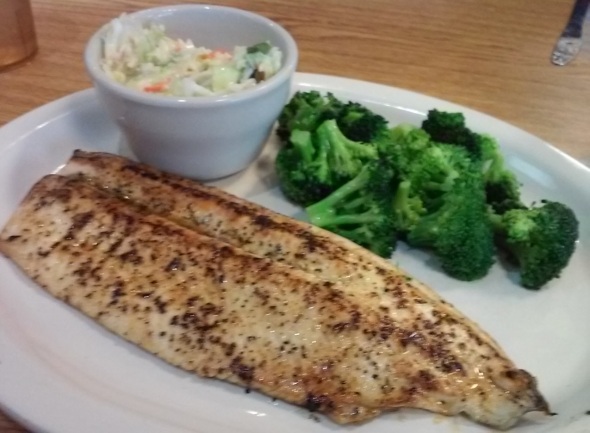 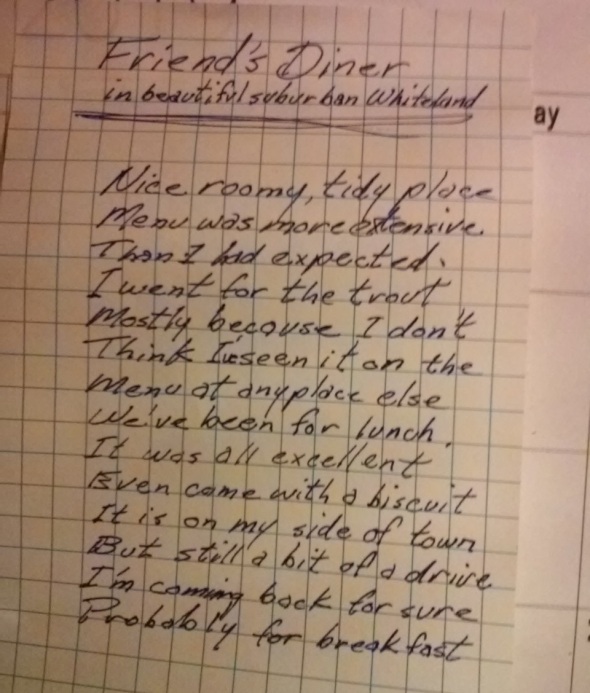 I agree with Pat about the trout. It is not the usual fish you find on a restaurant menu around here. I was impressed with Pat’s plate. The broccoli appeared to be fresh and I tasted Pat’s fish and I found it to be outstanding.

Regardless of the style of dumpling this was an excellent lunch, and for $6.99 I don’t think you could find a better bargain. This joint is farther from me than Pat but I can see myself driving just to try their breakfast. If a place can do a lunch like this I am always curious about their breakfast service. Especially the biscuits and gravy. 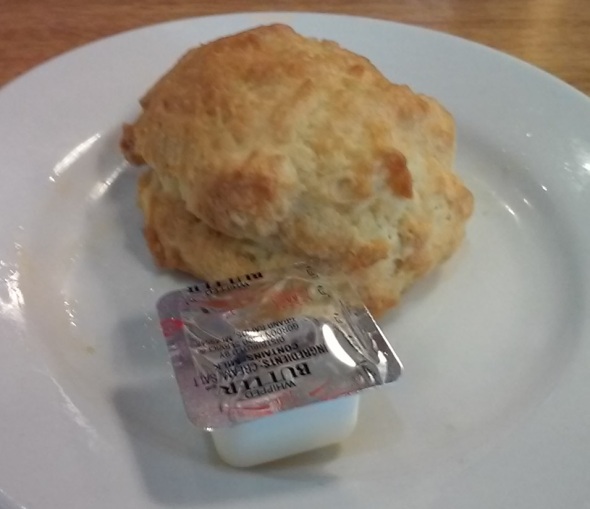 This is one of the biscuits we received for lunch. It is of the dropped variety. It was pretty darn good. Now I want a couple of those smothered with sausage gravy; maybe with a side of crisp bacon. Well that will be for another day.

This will be the last post featuring Pat for a couple of weeks as he and his wife are going to visit their eldest daughter. I intend to  “carry on”. Perhaps I will visit some joints Pat would never dream of going to. We shall see. 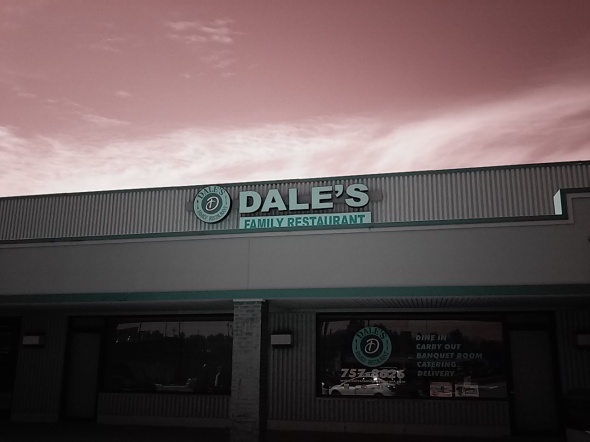 Dale’s is in a small strip mall at South Emerson and Thompson Road. I was in the area on Monday and decided to stop for breakfast. I had a full order of biscuits and gravy for $5.99. The gravy was tasty but the biscuits were more fluff than flake. A nice bite and a large amount of food for 6 bucks just not stellar. 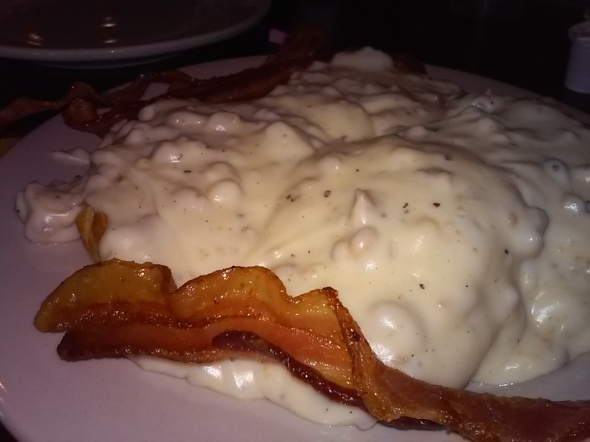 For lunch I opted for one of their specials. Chicken fried steak covered with white gravy served with 2 sides and a roll for $7.99. The steak was reasonably tender but the breading job could have been better. While tasty,it didn’t cover the meat entirely and it fell off while cutting. As for the gravy is was like the breakfast gravy,sans sausage. I chose the brown gravy for my mashed potatoes. I don’t believe it was house made but it was really pretty good. The potatoes were real and home-made,which is always nice. My second side was chicken and dumplings. Not a whole lot of chicken and the dumplings are more what I would call noodles. The flat kind that some folks call dumplings. It was okay as a side and you could get it as an entrée for $6.99. I am sure that will both warm and fill any belly. 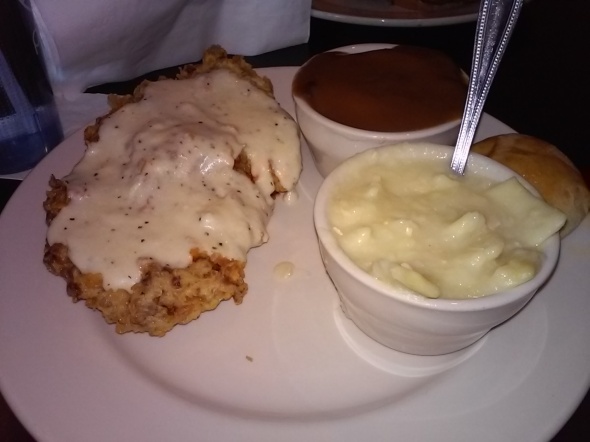 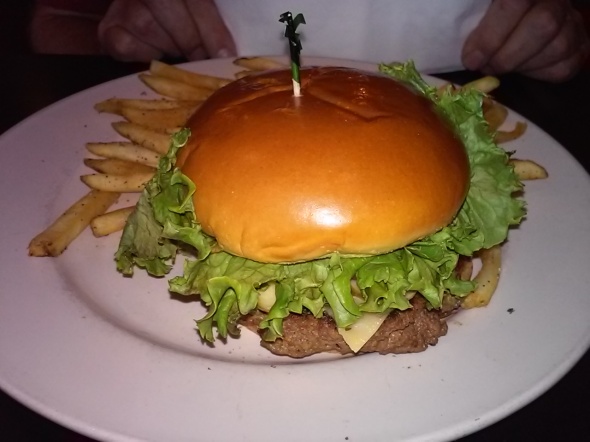 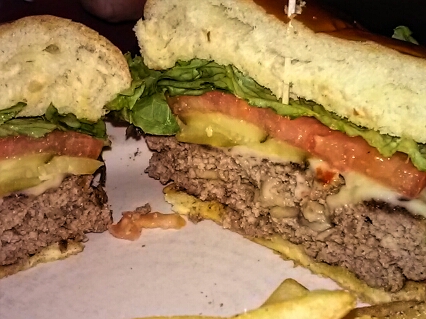 I think the picture of Pat’s burger says a lot. A slightly wilted piece of lettuce sent out on a burger is not a good sign. Regardless of the lack of attention to some details the food they serve is pretty good and reasonably priced. I would eat there again.

In our search for another old-time bar I thought of the Legion. The Robert E. Kennington Post (#34) has been located in Broad Ripple for years. Well it has moved to the former site of Just Judy’s;on 54th Street.

I read a review for it on Zomato and that was how I discovered that it had moved and they offer a lunch buffet. The buffet is both modest in price and scope. They also offer their regular menu if the current buffet selections don’t float your boat.

As I said the buffet is a modest one. It is a one man show and I think the one man, Pete did a solid job of it. We got there about 11:15 so he wasn’t quite ready. He doesn’t want the food sitting in the chaffing dishes any longer than necessary. Any steam table like apparatus,while keeping the product warm, also dries it out.

Baked beans and mac and cheese.

Chicken and noodles and brisket with BBQ sauce. 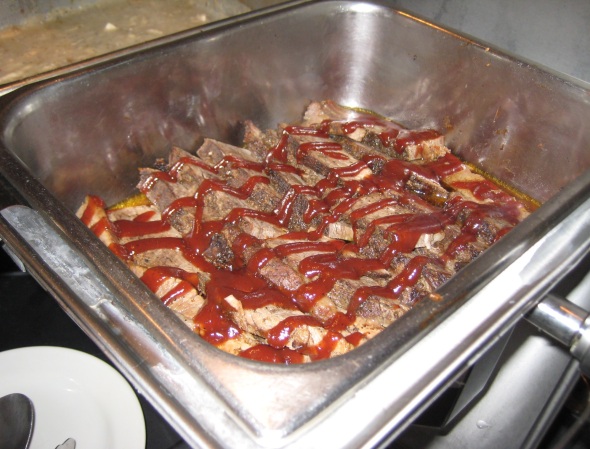 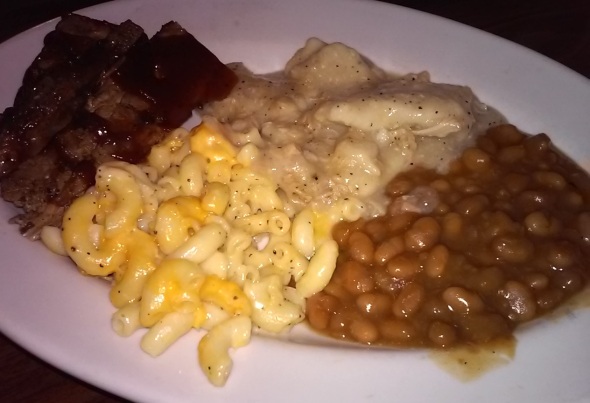 Okay. Here comes the “narrative”. The beans were nice and sweet, the way I like them. The mac and cheese was ok. Neither the best or the worse I have had. Keep in mind that mac and cheese is a very tough dish to keep on a buffet. It requires a lot of attention and maintenance. The chicken was tasty but the meat was all shredded,not too many chunks. As for the noodles (dumplings?) they were flat with a nice mouth feel and chew to them. They reminded me of the noodles my mom made so I liked them. Other folks might expect something with more fluff. The brisket was very tender and for the most part moist. Halfway through our service Pete brought us out some hot rolls and butter. These were really good. A slightly crusty exterior and a fluffy interior. He also serves cookies on the buffet. Today it was chocolate chip. If there is anything better than chocolate chip cookies hot out of the oven I would be hard pressed to say what it was. Overall I was pleased with our lunch choice. The addition of a soup to the daily offering would definitely add to the overall buffet. The buffet is served every week day and changes daily. The cost is $7.50 and sure you can find bigger but I don’t think you can find any friendlier. 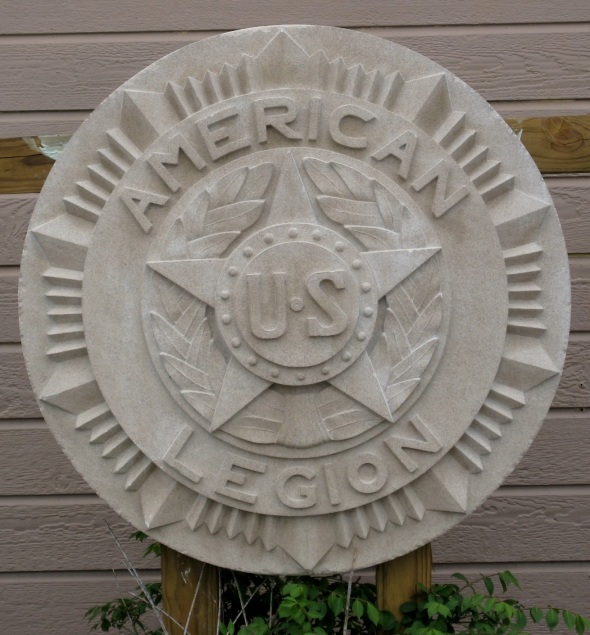