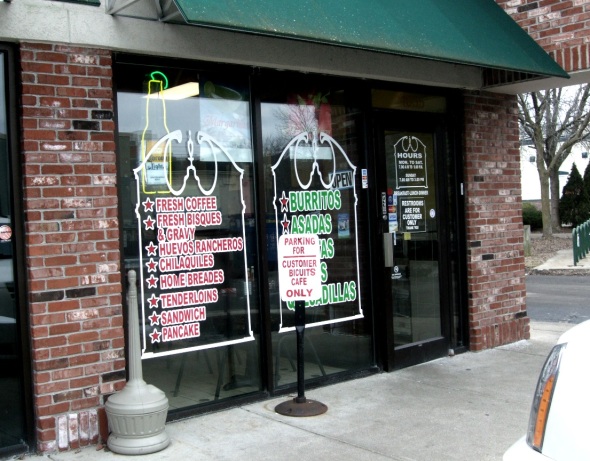 This place has been opened for a few years, but just doesn’t get the play it should. It is at the end of a strip mall right off of the strip in Broad Ripple. The fact that it is hidden by Three Wise Men doesn’t help much. Also they have nada in the way of public out reach via a website or even Facebook. There is a “menu” on Urban Spoon but it is not even close. The food is listed as Mediterranean. Well no it’s not. It is a joint that offers both Mexican and what you might call Ameri-Mex breakfast food. The menu is huge. From pancakes, to skillet to enchiladas they have it. Oh and pancakes too.

The last time anyone reviewed it was about 6 months ago. So It seems they are due for another review.

With the name Biscuit in the name they better have some great biscuits. Right? Pat stayed clear of the Mexican style fare due to the onion content and opted for a half order of biscuits and gravy for $4.50. In addition to the half and full orders they also offer a single biscuit and gravy for $2,50. 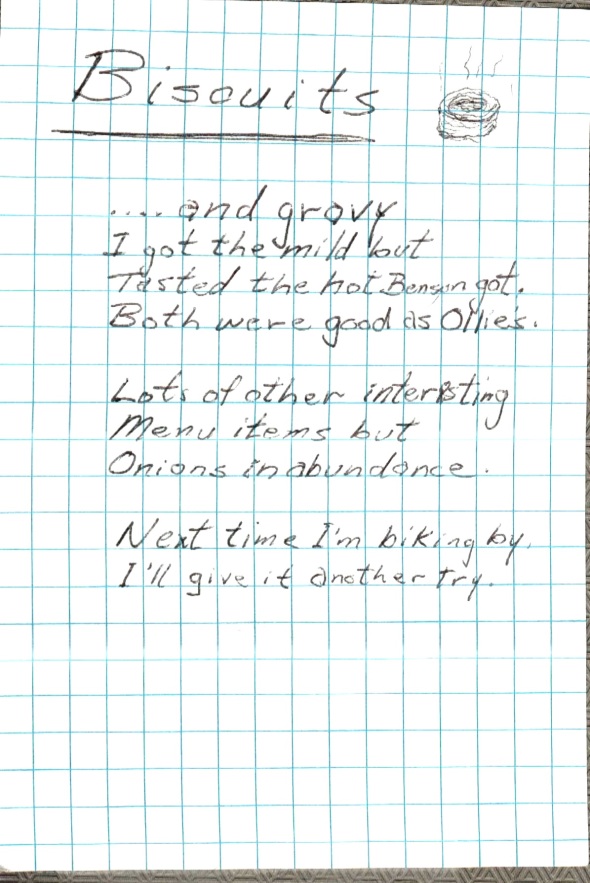 Several things caught my eye. They offer mole, green sauces and pastor. All of which I am a sucker for. I decided on the lunch chimichanga with shredded chicken and mole. The lunch comes with beans and rice and a small salad,topped with  cream for $7.95. It was pretty good. The tortilla was full of juicy shredded chicken and the sauce was really pretty good. Slightly spicy from the chiles, a little sweet from the chocolate, a good execution. The beans and rice were decent. Probably better than what you normally get from a Mexican joint in Indy. All in all I would say that this is a solid choice for a lunch dish. 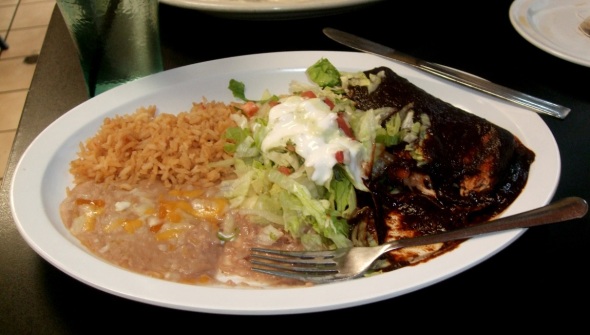 Of course I had to try the biscuits and gravy. A single biscuit with spicy gravy. The biscuit was excellent. Large and fluffy. The gravy was good as well, just not real spicy. Of course they had several different bottles of hot sauces available to add to the kick.

Once again my pictures don’t do the food justice. The mole comes out as black in the picture when it is a deep and rich mahogany. Also today would have been a perfect day to bring my scanner. The menu they have just loves being scanned with a wand. Sorry but the pictures and words will have to do for now. In a way this joint reminds be of some joints I have been to in New Mex and Texas. American sandwiches, Mexican fare and Breakfast. Breakfast food is a language all its own. A good joint to hit anytime.