Pat and I had lunch here a few years back but it was never properly reviewed. I did mention it in a post with some other places but nothing specific to the Tie Dye. I remember that I ate a Reuben sandwich and was not overwhelmed. That isn’t all that unusual for a joint that only sells Corned Beef as an option. This place has a very faithful following, and that prompted us to go back.

They offer a large menu with lots of cute counter-culture names for the food items that mimic the “psychedelic 60’s”.

According to the reviews the burgers are the “bomb”. Pardon the current vernacular but I haven’t used “outta’ sight” in more than 40 years. They use a 10 ounce burger and grill it to order,so if you order it medium rare that is what you get. I ordered a Chong’s chilli cheese burger for $8.95. 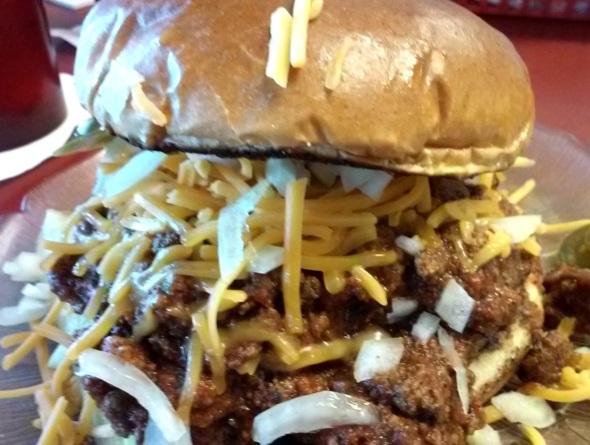 The burger is huge as is the bun. I ordered it medium rare and that is what I got. This sucker is definitely a knife and fork sandwich. The burger itself was excellent and coupled with a nicely toasted bun made for a wonderful sandwich. The chili covering it was a bit average;too much cumin for my liking. I would order a burger again but it would be the “Keep on Truckin” burger. Just a burger with a bun and garden for $7.95 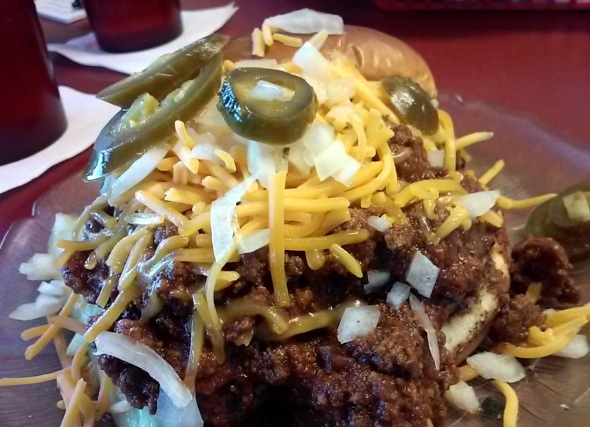 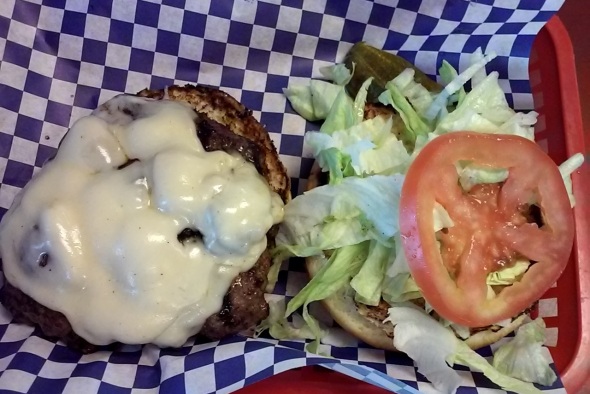 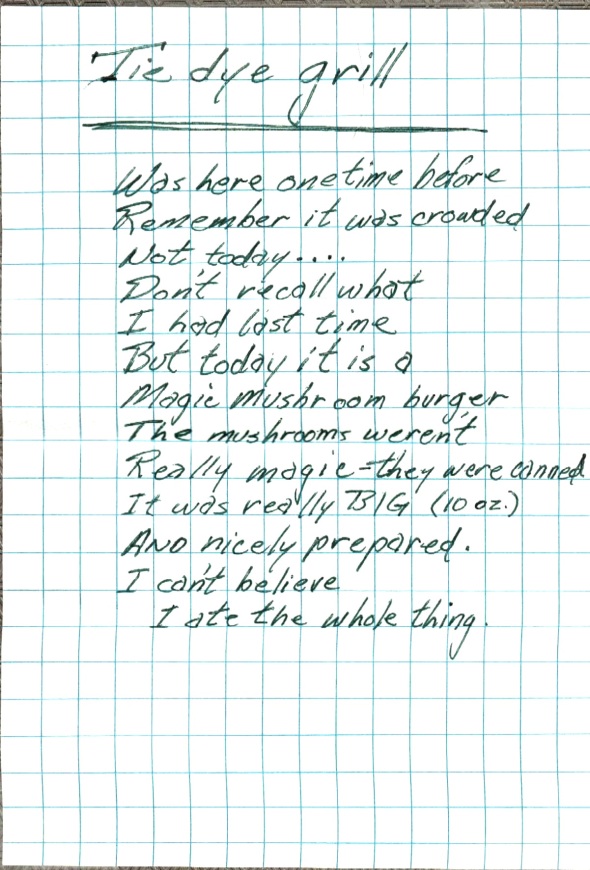 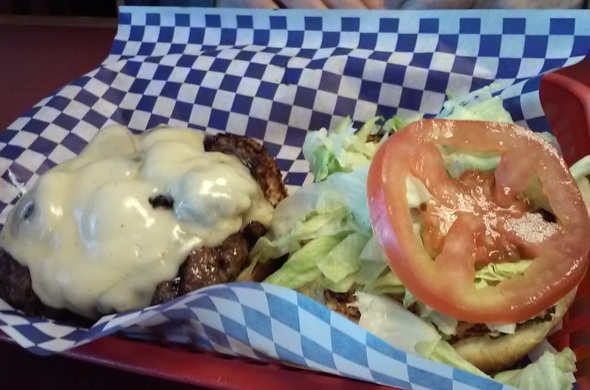 This is a really squared away place,clean,organized and the service is great. I think it would be a good choice for lunch or dinner. They also have some very good music in the background;a nice selection of 60’s and 70’s music, not too loud either. So if you are an old hippie or a young hippie wanna be you have your old little “Woodstock” to visit for a bite.

Pat and I had lunch here in July 2013. We heard sometime back that the joint had changed owners and quite a few changes were made. I also heard that they were going to start corning their own brisket. Before they bought raw corned beef and cooked it off in-house. I haven’t heard any more about it so we decided to go today. As I understand it the fellow that originally opened the Living Room Lounge is the new owner. At the Lounge he perfected a technique to cook a burger on a griddle that makes it crispy on the outside yet tender and moist on the inside. Pat remember that and he was jonesin’ for a burger.

The last time we were here the place had a definite industrial vibe, concrete floors the whole bit. Now they have a wood floor. They also had mushrooms. The menu offered fresh breaded mushrooms both times. The last time they were out, not this time. 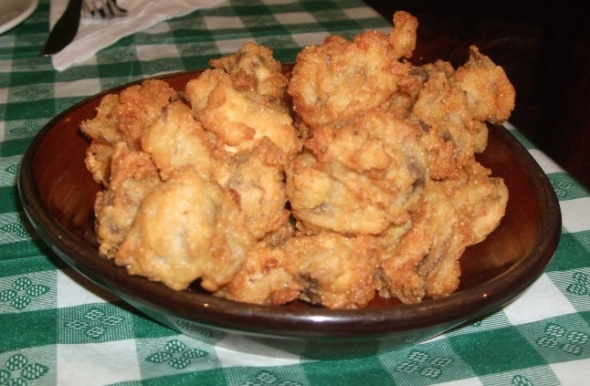 Now these suckers were hot, fresh and delicious. An excellent appetizer. 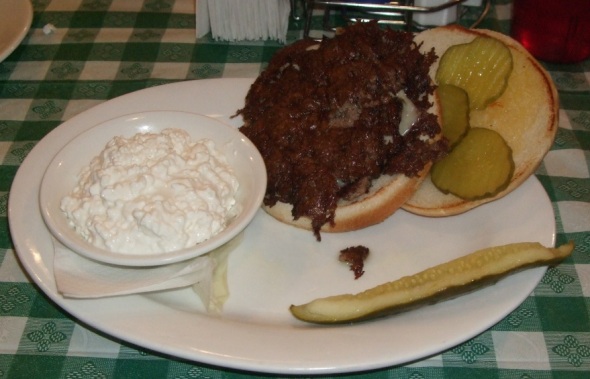 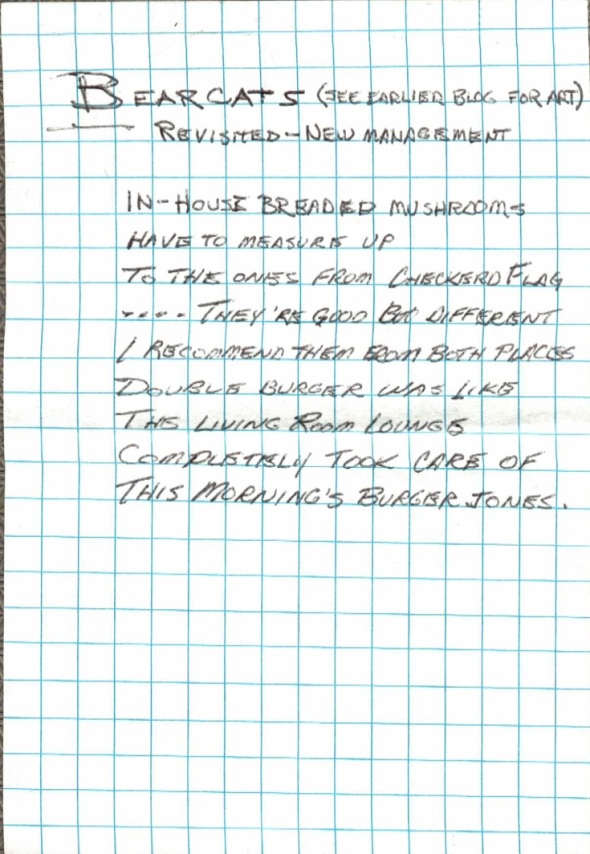 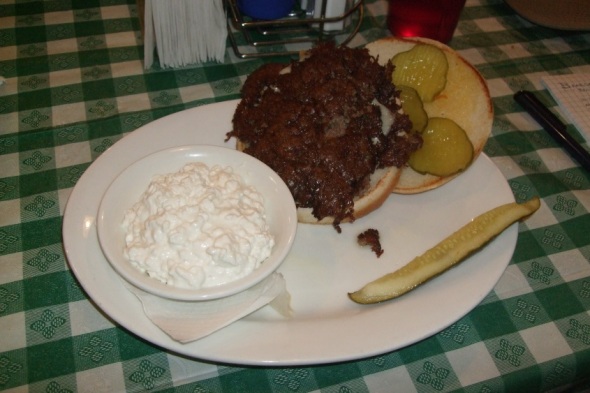 They had all the lunch specials typed out in the caddie on each table so you knew as soon as you sat down what the specials were. I opted for the Mahi burger. I really didn’t know what to expect. Our server wasn’t sure how to describe it. She did know they came in frozen and were good. As it turned out it was a round cutout of a fillet. It wasn’t chopped as you might expect from a sandwich called a burger. However it was a solid piece of fish and it was really pretty good. Of course this “burger” begs the question. What do they do with the rest of the fish? Don’t know. I liked this one and I really liked the sweet potato waffle fries it came with. 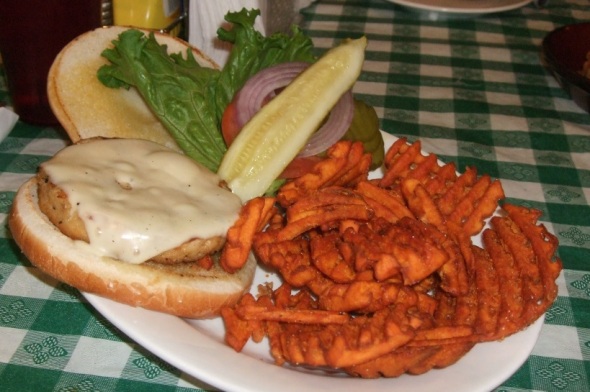 The special had cheese choice so I went with swiss. I probably should have gone with no cheese. The swiss was too mild to bring much to the table.

So Pat and I both think this new joint is an improvement over the old one. Better looking, interesting specials and a much friendlier atmosphere.

Well today was the first day of Pat’s return from his sojourn to California. Since he was recovering from a red-eye flight, that didn’t land until 5:00 AM I thought we should keep it simple.

Pogue’s Run is a joint that is a combination market, health food store and deli. The Good Earth is the only place, in my experience that is similar. But Good Earth doesn’t sell sammiches. 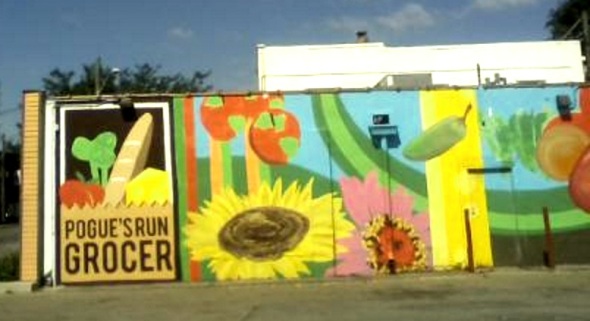 Normally when we go to review a place I bring a scanner for the menu and my little orphan Nikon for pictures of the joint and the food. Today I tried to “rough” it with my phone only. So the pics are at best so-so. 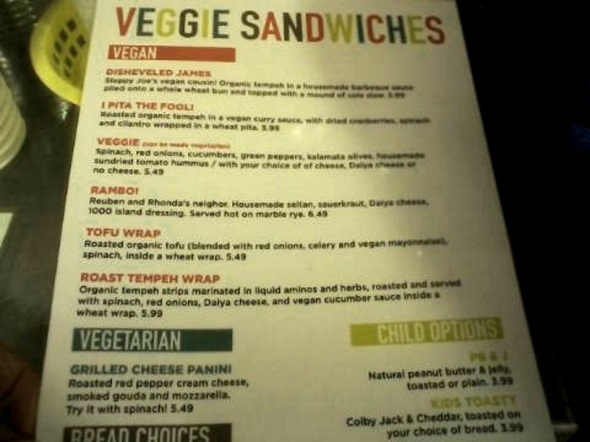 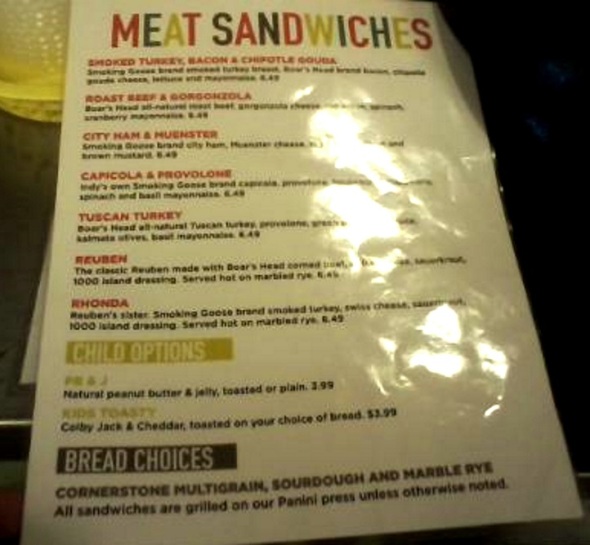 As you can see from the menu their collection of sandwiches are eclectic and creative. They use good quality ingredients and I think their prices are pretty reasonable. I am sure this is probably not too easy to read, so I am including a link to their website that lists the menu.

Pat decided on a Reuben sandwich 86 the dressing. 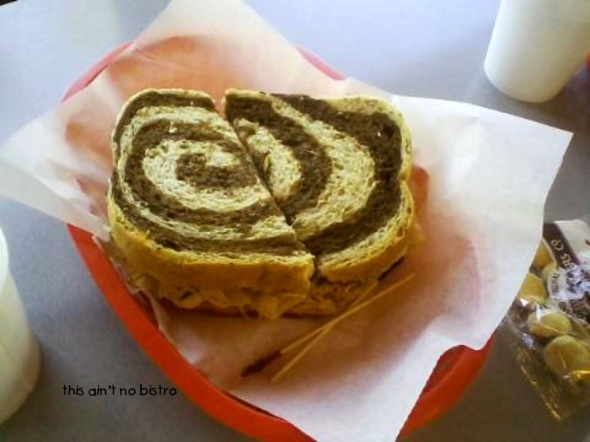 Pogue’s has a standing lunch special of a sandwich, chips or cup of soup and a 22 oz. fountain drink for $7.99. They do offer a craft made soft drink, but neither one of us wanted 22 ounces of soda pop. If I drink 22 oz. of carbonation it is going to have malt and hops in it. To the right of the order window they have a table with 3 soup kettles set up,so you can serve your self. 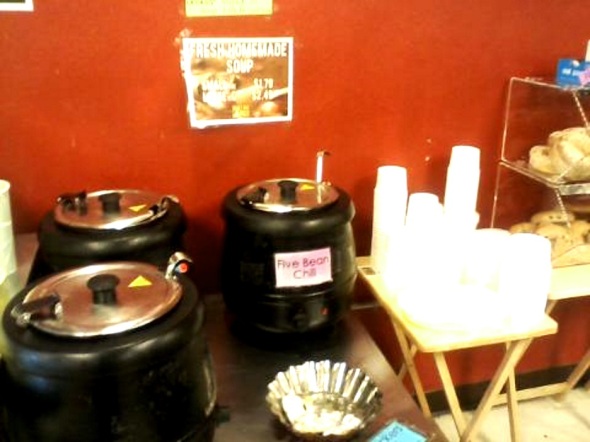 Pat noticed their baked potato soup and decided on a cup for $1.79. 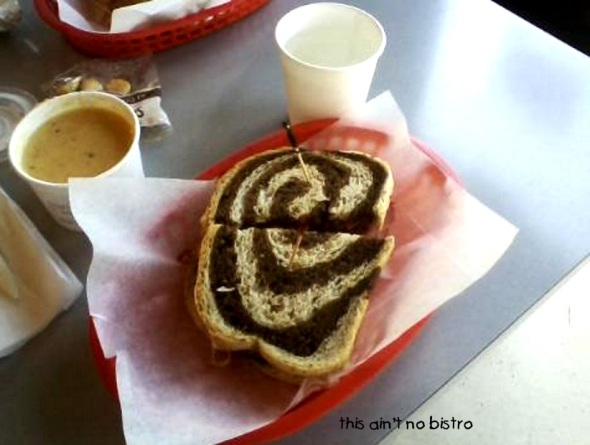 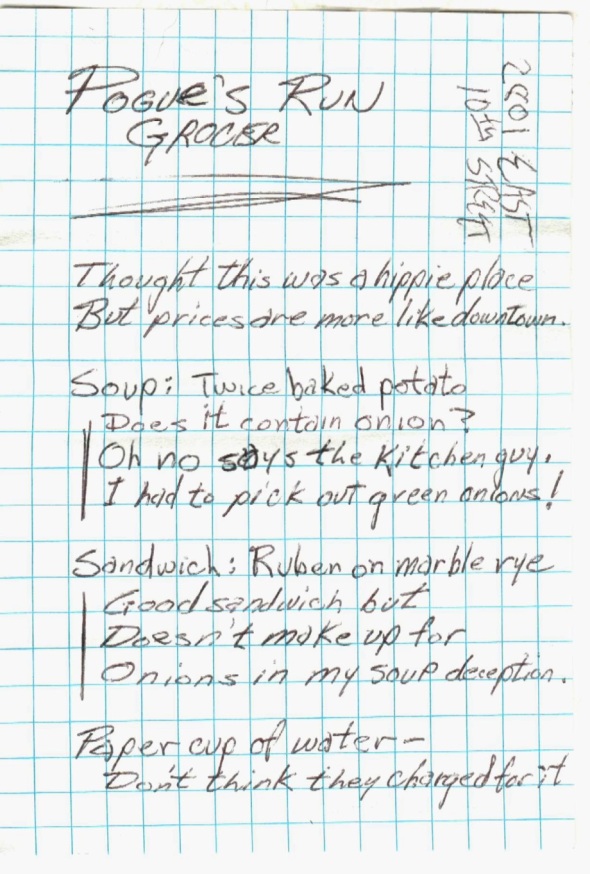 As you can see Pat was miffed by the onion in his soup. Pat’s aversion to onion isn’t just a foible or a matter of taste. With him the consumption of onion; raw or cooked causes him severe gastric distress. So. Kitchen guys. Know your product. Know your recipes. For what it is worth I tried his soup. It was pretty average. Bland and “mushy”.

As far as I know I have no issues on food stuffs. I ordered a Rhonda. That is like a Reuben with turkey subbing for corned beef. I thought it was quite nice. I am very familiar with Smoking Goose meats, I just haven’t tried their turkey before. To me turkey in a deli or a store; or for that matter in a restaurant is a ubiquitous form of protein. I never really expect “killer” meat. This sandwich was tasty,and I would get it again. 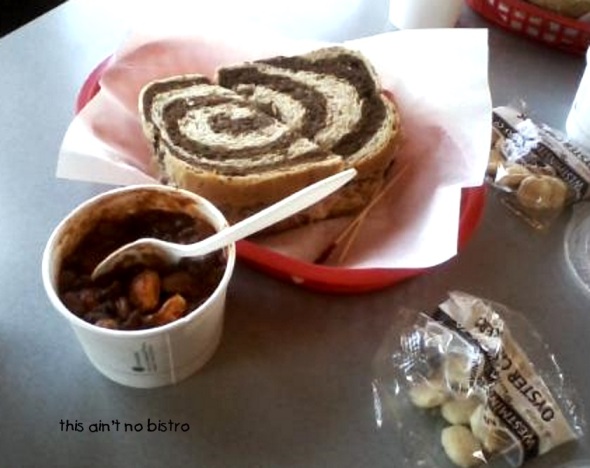 I can’t say the same for the 5 bean chili I ordered to go with my sandwich. I liked the oyster crackers they served, that is about it. The soup was pretty pedestrian.

Pogue’s Run is a versatile joint that serves a void in the city and this area. I have and will go there for their broad selection of bulk grains, herbs and spices. They seem to have a bigger selection than Good Earth, and they are self-serve. Some of their prices are higher but it is usually a trade-off. Broad Ripple or Woodruff Place. I enjoy this little joint. So if you are in the market for their particular product niche then this is a good a place to go. And you can get a sandwich. Or a salad bar. I forgot the salad bar. I sure didn’t get any pictures. But the array is really nice,with all the usual suspects for grazing. And it is $7.99 per pound. Just remember to pay before eating. 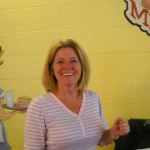 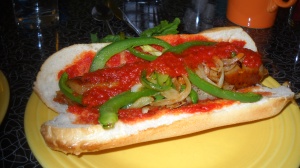 I can honestly say that mama’s Café is a delightful place. They cook up their own corned beef every night,and use it for corned beef sandwiches and Reuben sandwiches. They also make the greatest corned beef hash around. The place is sunny and as cute as a basket full of kittens. The staff is warm and friendly and the food is outstanding. We started off with a fried biscuit Appetizer, fried biscuits tossed in cinnamon sugar and served with apple butter. We continued with potato cakes, bacon, some of that aforementioned corned beef hash and one of the best Italian sausage sandwiches I’ve ever eaten! The sausage was rich in fennel and slightly spicy. It was smothered in a good marinara sauce and topped with sautéed peppers and onions. I think the best thing about the sandwich was the onions were nicely crisp and yet the peppers were slightly sautéed, so you could really taste the freshness of the pepper.I believe the operators name is Holly, but I’m not positive. I do know she makes a cherry pie that’s better than anything mom ever made. She even uses lard to make the crust, and everyone knows you can’t have good pastry without lard. I got some nice pictures of the place with my new Nikon, however I can’t locate a USB cable to download them to my computer. So for the foreseeable future all of my blogs will be picture less, but that is only a temporary setback.Should anyone from mama’s  read this blog I want to thank you again for a delightful lunch and apologize for not getting all your names. That will be rectified in the future.. As a footnote I’ve been using a Dragon to write all my blogs so the writing may not flow as it did before, but Dragon is able to learn, and so am I; I think.Oh another post script, they have fried spam on the menu, what more can you say.Surprise surprise the picture problem has been taken care of;obviouely.