Since we hve been back we have done mostly revisits. Part of the reason is the food industry here is still in flux with all of the Government second guessing. Another reason is we like to do a welfare check on some of our more favorite joints. When it comes to favorites the Red Key ranks right up there.

I know the trend in bars is craft beers and the whole gastropub scene but the Red Key is a comfortable joint with beer and liquor and just a few food offerings. https://www.redkeytavern.com/

I decided on a cheese burger. A simple patty fully cooked on a griddle with some onion and pickle.

So if you haven’t been to the Key you should ask yourself why. It’s a nice and relaxing atmosphere with very good cheese burgers and they only take cash. However on Wednesday the drink special is a $4.75 Manhattan. Now that is a good deal.

This week we didn’t have lunch at just any joint, we had lunch at an Indianapolis Landmark. The Red Key. The Red Key has been an institution on the north side since 1953, when Russ Settle and his wife opened. Mr. Settle was a WW II veteran. A B-17 co-pilot and a POW. So to say he didn’t suffer fools gladly would be an understatement. I think the epitome of his approach to business would be his rules. They are as valid now as they were then.

This joint is as rugged as John Wayne and as authentic as Humphrey Bogart. I don’t think the decor has changed in at least 40 years. But it sure is comfortable. Like a pair of favorite slippers. 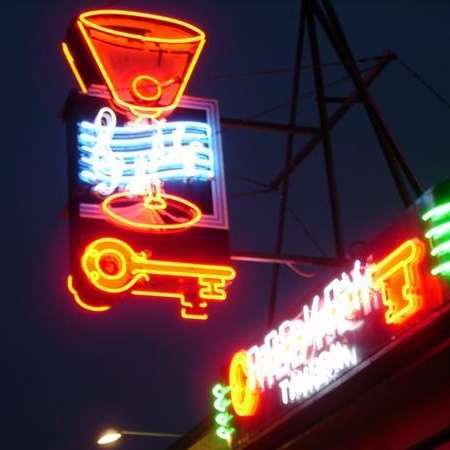 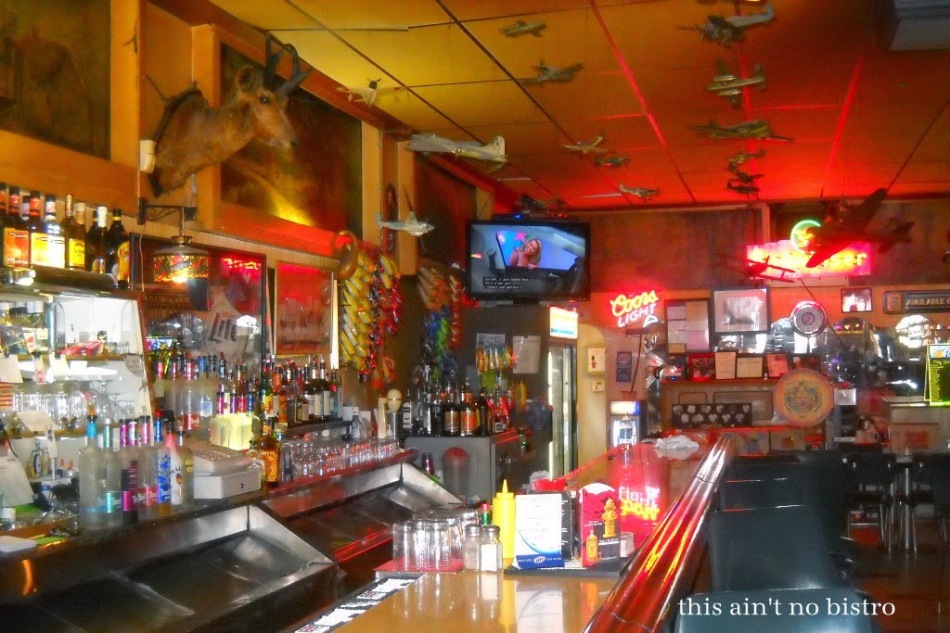 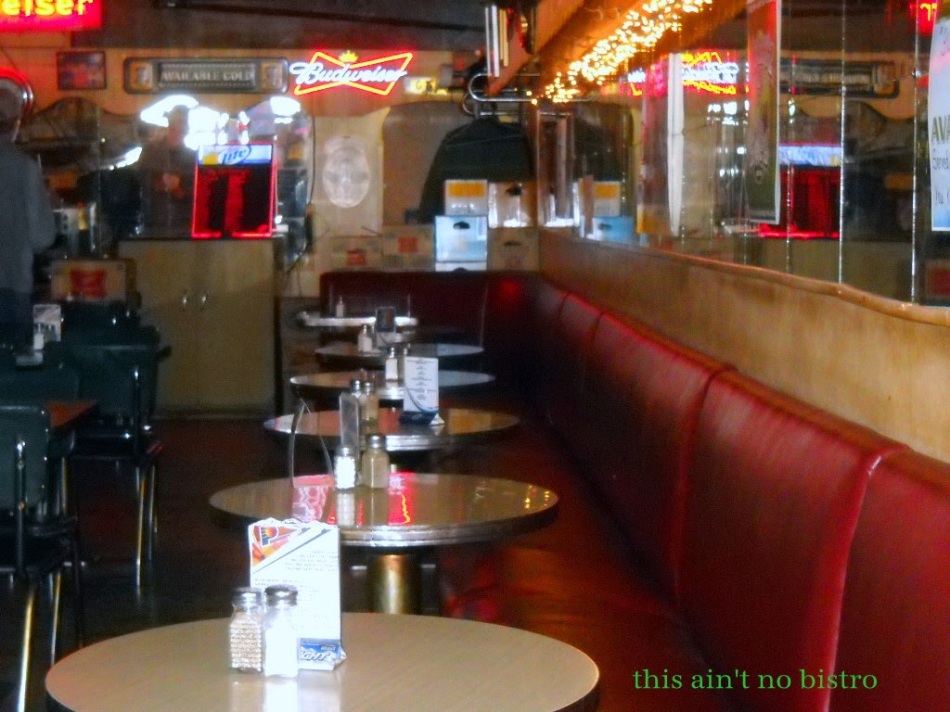 Pat suggested this place a few weeks back. Fran, Pat’s wife wanted to go there for her Birthday. She’s not a native Hoosier and she had heard a lot about its history and wanted to see for herself. She enjoyed the charm and simplicity of the place and it got Ol’ Pat thinking. Since we are cheerleaders for the small business owner why not go to a place that is the epitome of Mom and Pop joints. After all Red Key has been around for 60 years. As you can expect the menu is small. During the day there is only one person on duty. Bartender / server / cook. 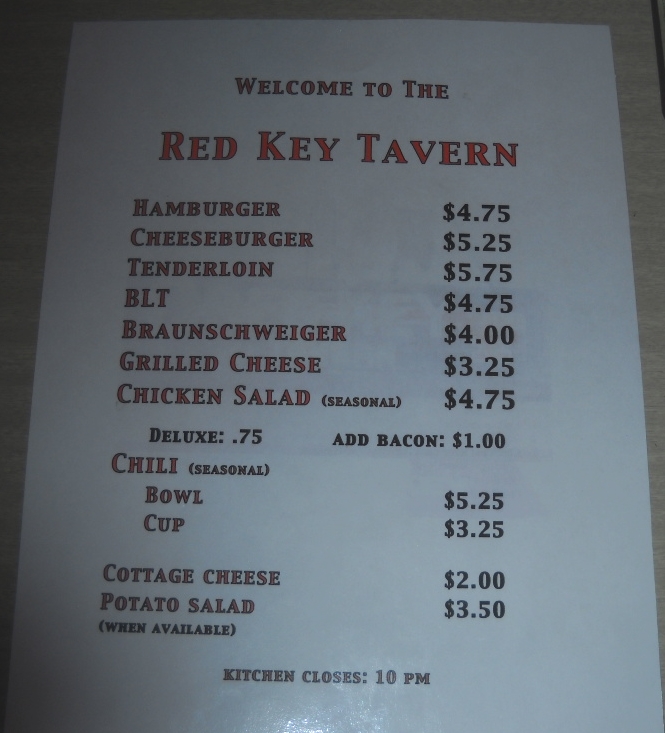 Pat and I both opted for cheeseburgers. His with BBQ chips and mine with potato salad. 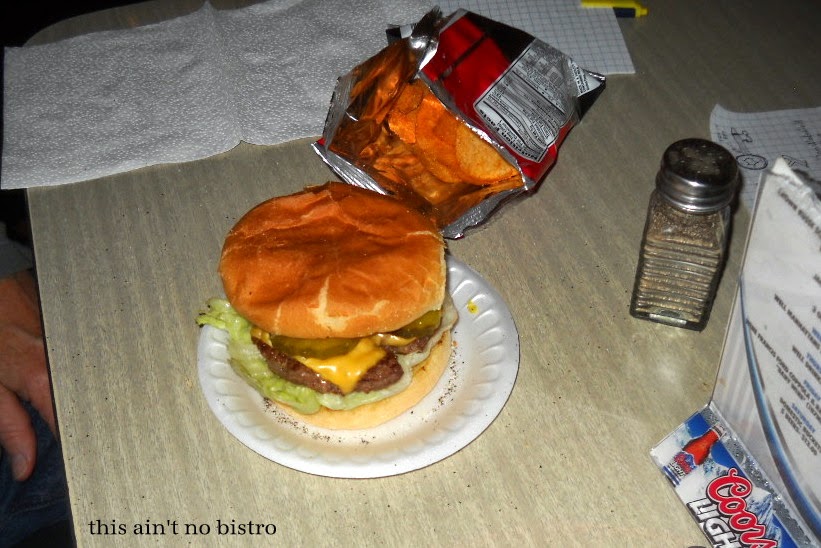 The burgers are simple flat top affairs. Grocery store meat and grocery store buns. No aioli, or special sauces. Beef cooked through, with crispy edges and American cheese. Personally I like the fact that they don’t use red onion. If I get a cold set on a burger it will be white or yellow onion and dill chips. So the burgers 4 thumbs up. I can’t say the same for the potato salad. It was home-made,and of the whipped variety, but it was pretty bland. It seemed to be cold mashed taters, a touch of mayo and some crunchy bits. Not real exciting.

Mr. Russ Settle passed away in 2010, and his son is running the show. After his passing IBJ wrote an article giving a bit of the history of the Red Key. I am including a link to that article to give people a feel for what the Red Key Tavern is.

I think a place like the Red Key is essential for the sanity of a city’s people. A quiet spot where you know what to expect. A place that has open and expressed rules. Unlike so many other joints that seem to have no limits on what goes on. I think that might appeal to a lot of folks. Not just old timers.