The place is neat as a pin, attractive and with a great mural on the wall. I am afraid this picture doesn’t do it justice. My little orphan Nikon broke last week and I am not sure he can be saved. So I had to use my phone. The phone with the camera that hates me. Notice how the smoke from the stack wafts up to the vent on the bulk head. Brilliant.

It appears as though they don’t do much creative cooking. The menu is heavy on fried food. I have no issue with that. People dig it, and it sells. The “issue” I have is it appears to be all IQF stuff pulled from the freezer and dropped in a fryer. 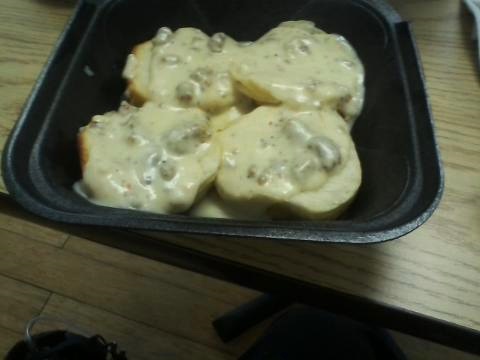 What can I say. The biscuits were from a can and the gravy was bland. I ate it all. As I said, it wasn’t terrible food it just wasn’t really good food. It was only 3 bucks.

I also ordered a Jimmy burger. That is an all beef patty with grilled onion,cheese, lettuce tomato and pickle and a Grub House sauce. And that comes with a side and a beverage for $7.

As you can see I opted for onion rings. The side options are fries, rings or okra. Since they all come in a bag the choice is possibly moot. The burger is a standard 4 to 1 patty, cooked on a flat griddle, topped with onions and cheese and served on a small sesame seeded grocery store bun. The best thing was the cold set. A nice piece of green leaf lettuce, a good slice of a 5×5 tomato and some decent pickles. Of course the Grub House sauce tasted a wee bit like 1000 Island sauce. But that’s okay, it makes me nostalgic for a Big Mac.

So that is my opinion of The Grub House. Will I go back? Probably not. If I lived closer I probably would. Come on. Some times folks need some fried grub. And only a 35 pound fat Fryolator can do it justice.

That was pretty lame I know;but the place,Shallos,in Greenwood is anything but.They stock 500 bottled beers and 36 on draft.They were no longer serving the IPA I wanted to try so the Bartender offered me several suggestions and even gave me a few samples.I ended up drinking 3 beers,in ascending ABV;so by the time I finished I was quite happy,as well as hoppy.But;being the responsible drinker that I am,I ate-and quite well I must say.I ordered their burrito.I knew I wouldn’t get an “authentic” burro,but that’s not what I wanted.I wanted a midwestern version;and I wasn’t dissappointed.I received a big burrito stuffed with well seasoned meat,smothered with a good enchilada sauce,garnished with crisp lettuce and diced tomato.It was a really good-looking plate.I’d planned on taking a picture of it but I forgot until I was half way finished-oops.But I did discover that the slightly spicy and sweet tastes of the southwest marry quite well with the bitter hoppiness of an IPA.As for Patrick he had an IPA too and opted to try a battered cod sandwich.Now this guy loves cod I think we’ve covered that before,he’s probably eaten deep-fried fish everywhere that it is offered in Indy.And Paddy declared that this hunk of battered and deep-fried cod was the best he had ever tried.So there you have it.Unless you live in Elkhart try Greenwood’s Shallos for an honest lunch and a good beer,or 2.