a person who dines.

a small, informal, and usually inexpensive restaurant
This little joint fits definition # 4. Although there are a couple of examples of # 3 in this area. One is on east 38th street, it is barely recognizable as to its original intent as it was converted to a Subway some time back. The best example is the Oasis Diner in Plainfield Indiana. 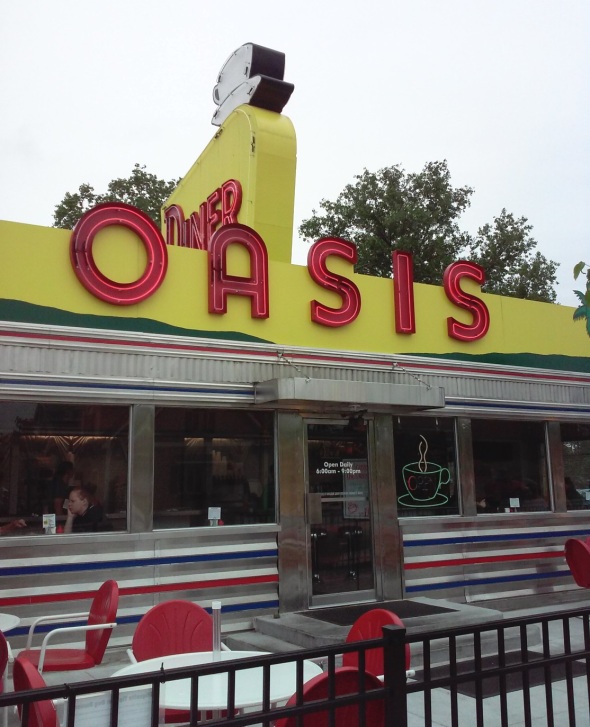 Dave & Betty’s doesn’t look at all like this but their intent is the same as every other diner in the country. Serve good food at good prices. 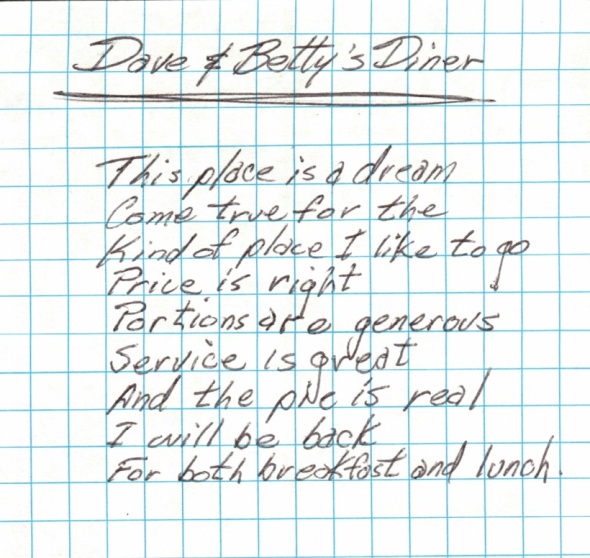 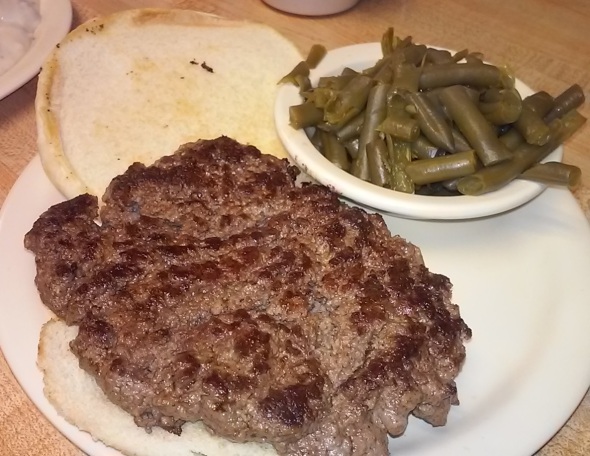 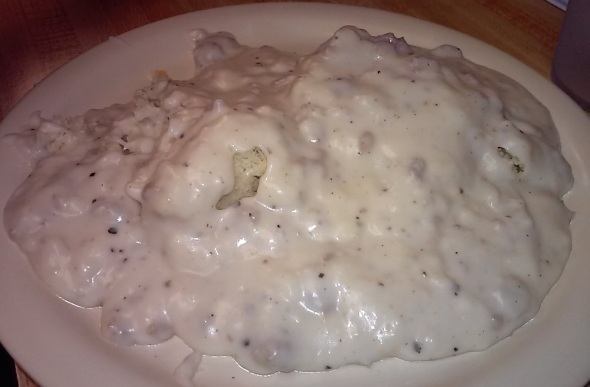 This is the half order of biscuits and gravy that we split as an appetizer. The gravy was better than most but not as good as Ollie’s. The biscuit was very nice indeed, and it only cost $3.60.

For my meal I could not resist their Beef Manhattan. For all you non Midwestern folks that is a roast beef sandwich cut on a bias with a pile of mashed potatoes in between the 2 halves. Then the entire thing is covered in brown gravy. There version was $ 6.60.

The taters were Potato Pearls and the gravy was probably from a mix but the beef was real and the portion was generous and it was hot. I thought it was delicious. It reminded me of my first Manhattan as a kid at the old Troy Restaurant in Downtown Indy. It is hard to resist hot beef and gravy. Of course had I been more observant I would have noticed that there special was meat loaf and I have a “thing” for meatloaf. 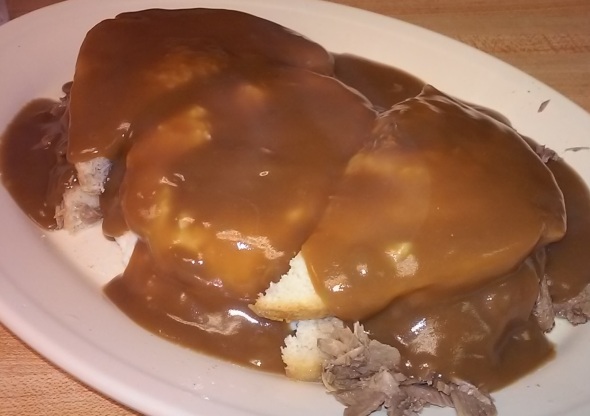 As big a lunch as it was I decided I had some room left for pie. In this case it was Banana Dream. A real pie crust filled with banana pudding and topped with whipped cream. It was pretty good. I probably could have eaten a whole pie. 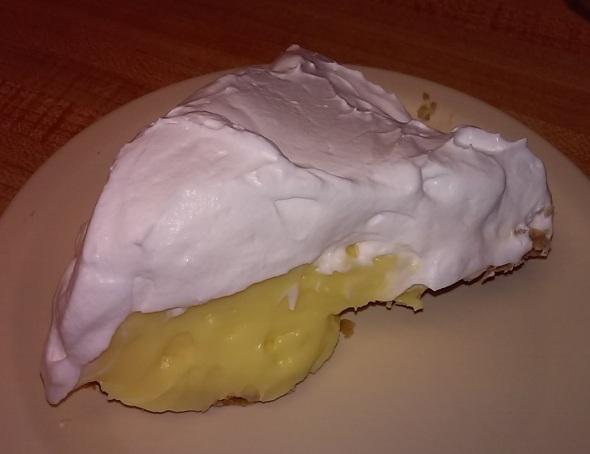 This diner doesn’t have much of an electronic presence so I scanned their menu but only the lunch part turned out. 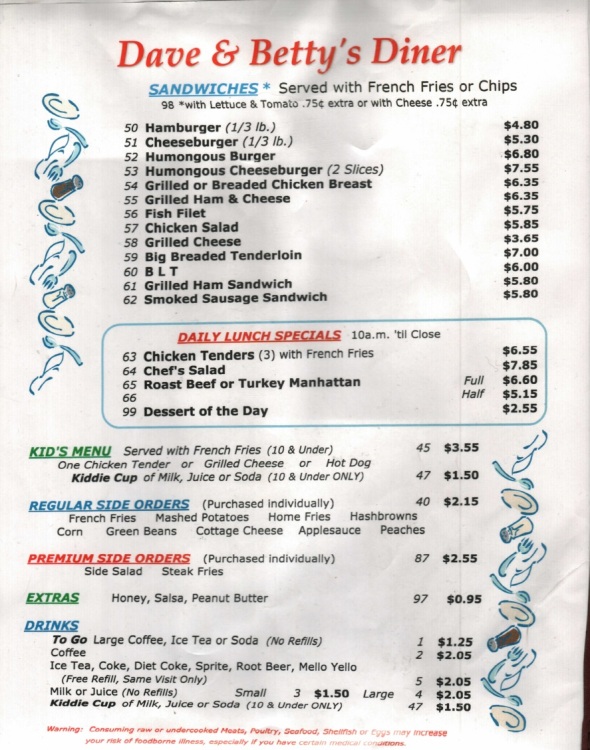 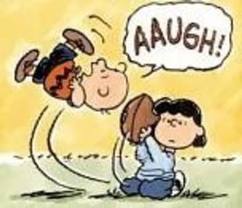 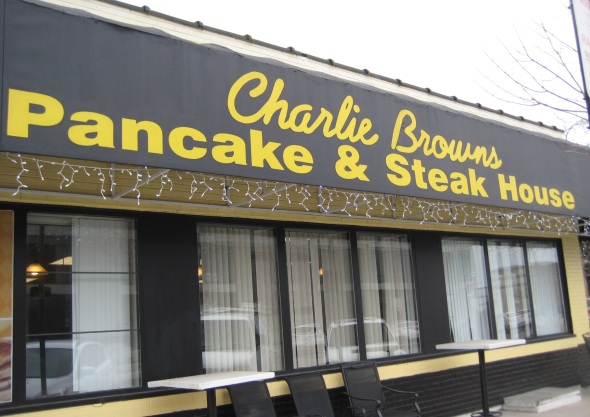 Sorry. I couldn’t resist. This Charlie Brown has only been around since 1975, serving breakfast and lunch to 1000’s of folks in this west side community of Speedway. Pat and I have had this on our list for so long we had damn near forgot about it. Today we remembered and thought it was time. 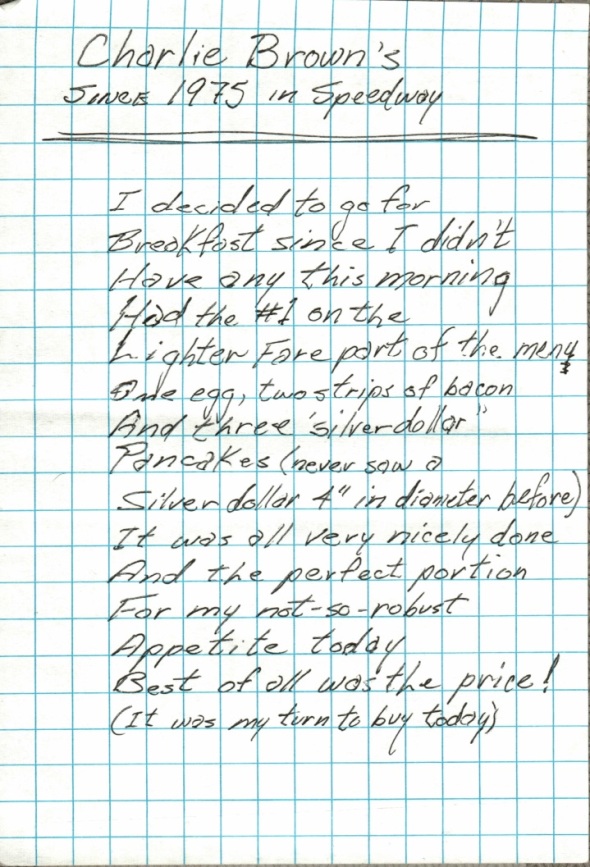 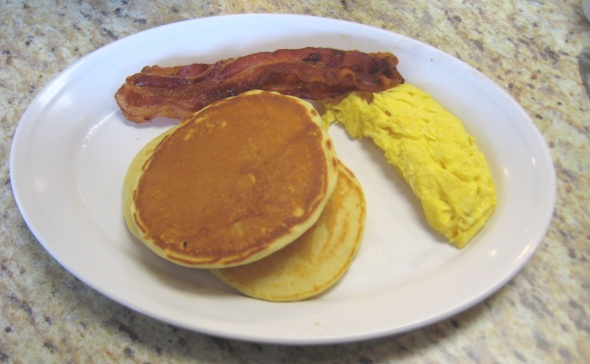 Pat allowed me a bite of his cakes and they were quite good, nice and fluffy. I too fell in line with breakfast. A sausage omelet with raisin toast instead of pancakes. 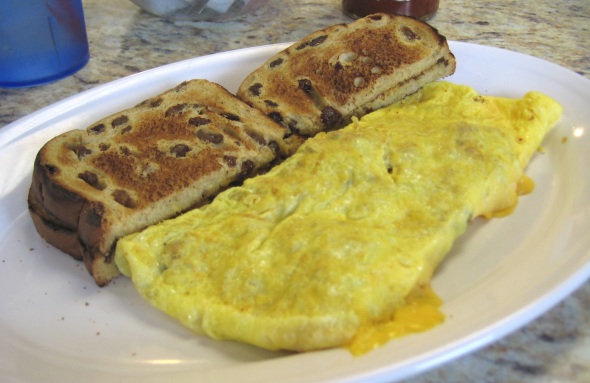 I thought it was great. Three eggs loaded with a large portion of sausage and cheese. I can’t say anything bad about my meal or this joint. I believe my plate was less than $7 and Pat’s was about $5. They also have some excellent breakfast specials they serve before 11 AM. They offer regular lunch items as well as country fried steaks smothered with sausage gravy. That is for a serious appetite. Also they have a “fritter” as well as a breaded tenderloin. I would guess that would be closer to something we got at the drive in when we were kids. So folks who have been here know. New folks in the area should probably find out. It is a nice little joint. 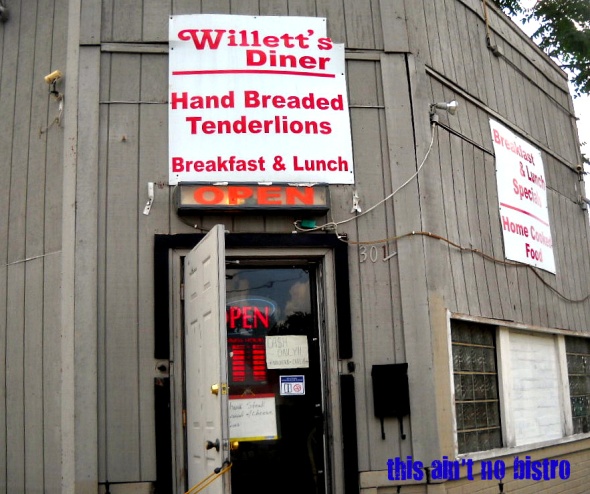 A tiny little place that’s been open since 2005. It used to be a bar. Back when neighborhoods had grocery stores and bars. Mr. Willett bought the place and converted it to a neighborhood diner. He passed away and his Mrs. took over operations. She was recently diagnosed with cancer and now it falls to the daughter to keep the joint afloat. You won’t find arugula or confit here but you will find hand breaded tenderloin; breakfast served 7 AM to 2 PM and house made pies on Wed. and Friday. She doesn’t use lard for the crust but she does use Crisco. As you can see the menu is not that large; but they do have daily lunch specials. That is what Pat and I ordered. The special, only difference I got mine covered with fried onions. We shared some fried mushrooms. They were of the pre-breaded IQF variety. Respectable if not remarkable. 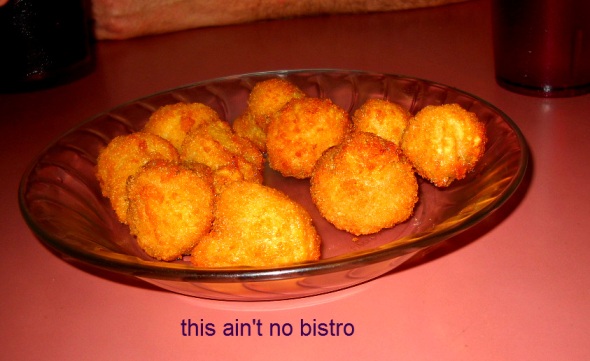 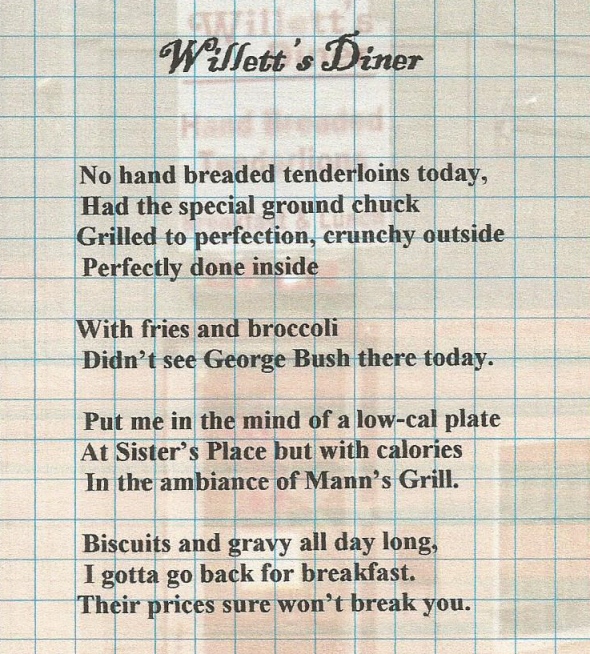 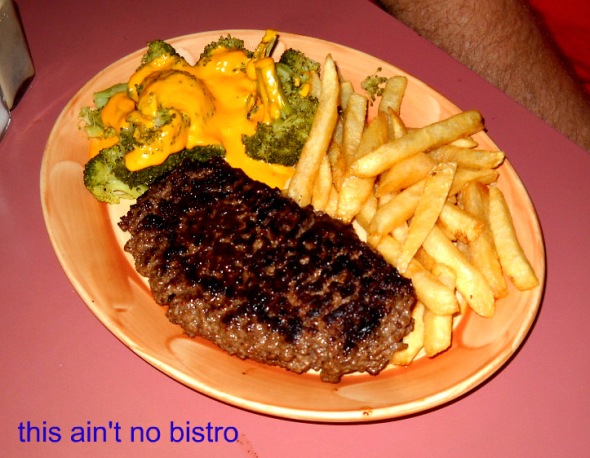 Unlike Pat I would have preferred my meat with a little more pink inside. The onions were nicely done. The crispy char from the hot flat top was excellent. All ground meat patties should come that way. All in all ,like the mushrooms ,tasty and respectable. The broccoli exhibited all the signs of exposure to excessive heat. A faded green color and no snap. Now “chefs” will tell you that is not the way to prepare it. And a broccoli freak such as Pat does not dig it like that. I, on the other hand do not like the bright green crisp member of the cabbage family. I prepare them the “correct” way I just won’t eat them. I prefer mine to be overcooked and covered with canned cheese sauce. So the veggie pleased me enormously. I am such a Hoosier. I know Willett’s is probably not on your beaten path; but if you are in the area try it for breakfast. I mean look at the prices. 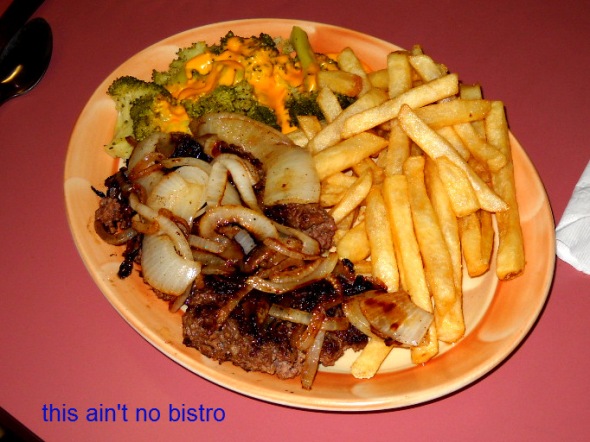