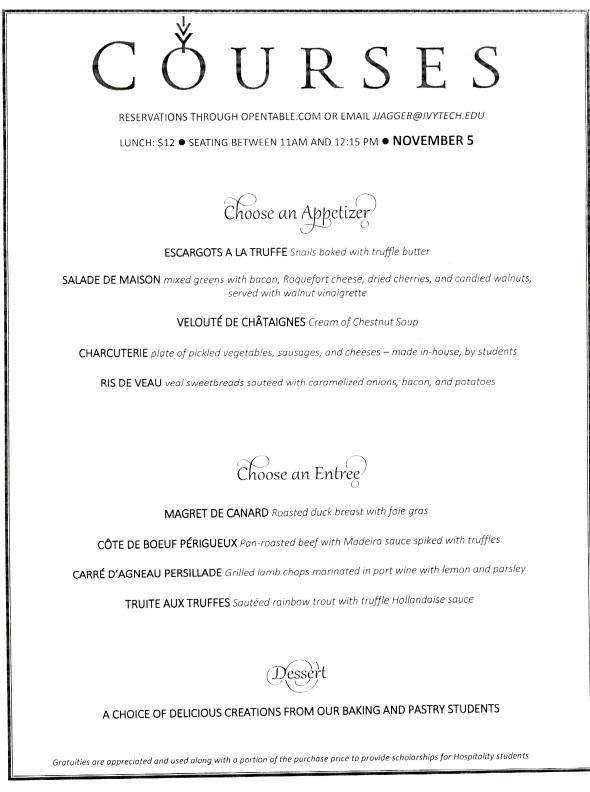 Pretty impressive menu isn’t it. What makes it even more impressive is the service is prepared by students. I have written about Courses before and I will probably write about it again. The reason is obvious. You receive a 4 star meal at 2 star prices. Also part of the proceeds and all the gratuities go to their scholarship fund.

The hardest part of the meal was deciding on what to have. The menu offered some true French Classics. I decided on the sweetbreads appetizer and duck entrée. 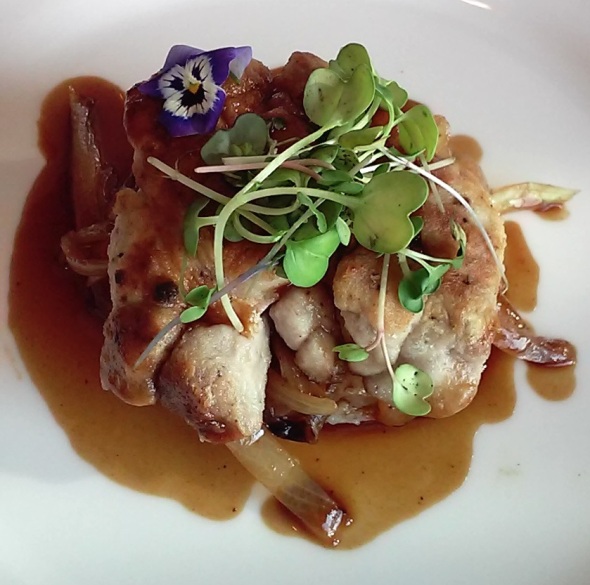 This dish was expertly prepared and a joy to eat. The sweetbreads had a smooth and creamy interior and a crisp exterior that held its own with the crusted potato cake it rested upon. Between the two was the carmelized onions and pieces of bacon;as though you didn’t get enough decadence with the sweetbreads alone. A stellar dish.

Now for the Duck. Without getting in the technical weeds a couple of comments about duck. Most duck consumed in the U.S. is White Pekin. This dish traditionally uses the  Moulard (Mulard, in French). This is the duck raised for its liver. Which does make a difference in eating. The meat of the Moulard is richer and “beefier” than their American cousin. The Moulard was used for this dish.

This dish was everything I expected it to be with one minor exception. It was a bit overcooked. I expect duck to be rare or mid rare. This was a shade more medium. In no way did it detract from the over all effect of the dish or in my enjoyment. I may have enjoyed it more were it bloodier but only marginally. The “beefy” fowl married to the creamy liver was a treat. The potatoes and veggies were tasty as well but were minor actors in this play. I love liver in all forms and to me foie gras is to liver as Roquefort is to Bleu cheese;the best. 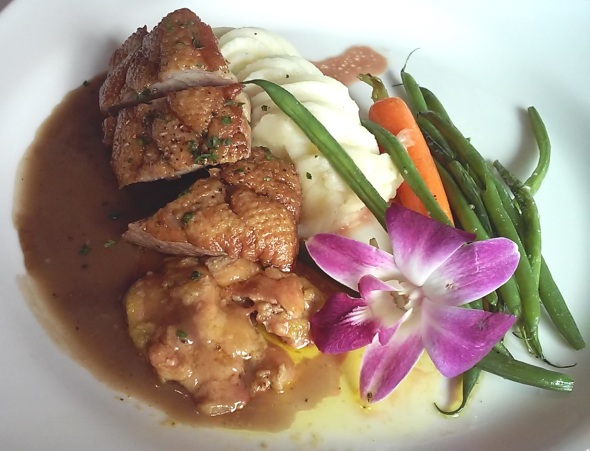 Patrick opted for the Charcuterie plate and the beef entrée. He is a meat and potatoes kind of guy. 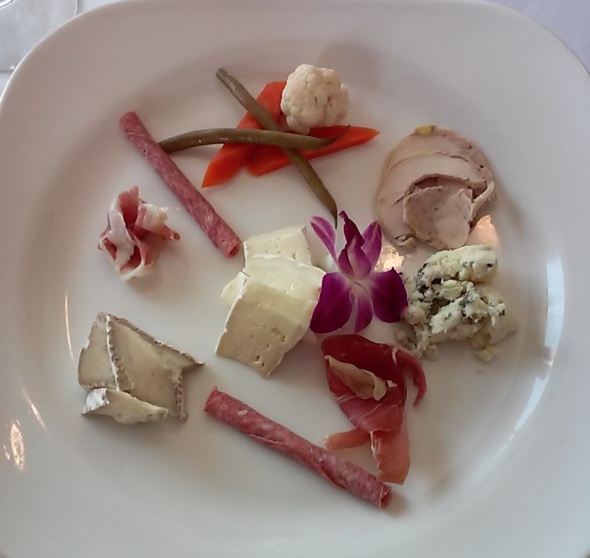 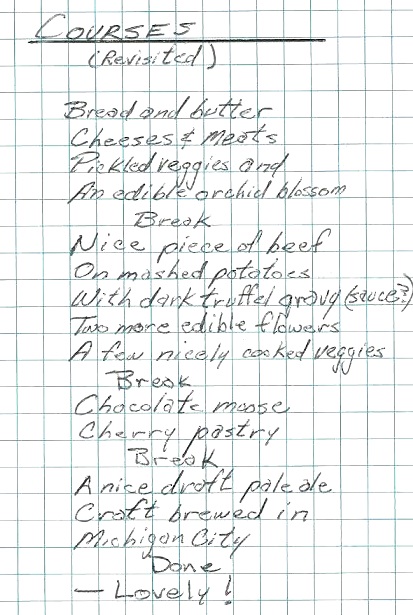 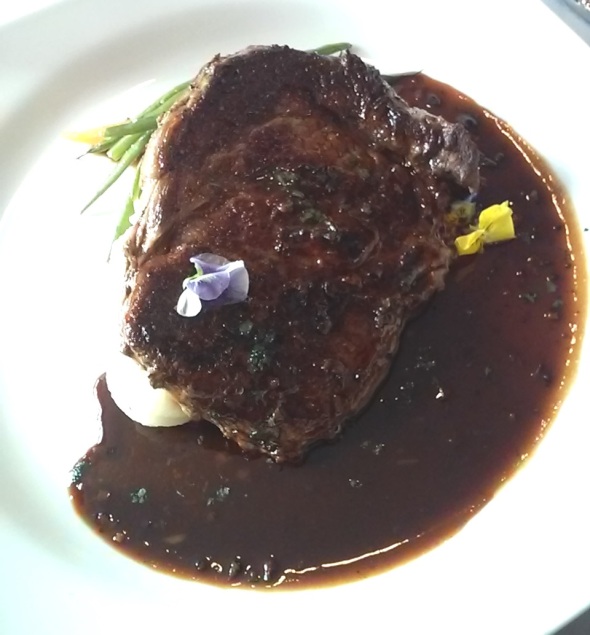 I am afraid the picture doesn’t do the dish justice. We didn’t get the mashed potatoes or skinny green beans and carrot in the shot,so all you can see is a mass of meat and sauce. Yeah I am pretty sure it was a sauce; a delicious sauce; not a gravy. The difference between a sauce and gravy is the use of flour to thicken.

Well as Pat already said we got the cherries in puff pastry and Pot o Creme for desert and shared. 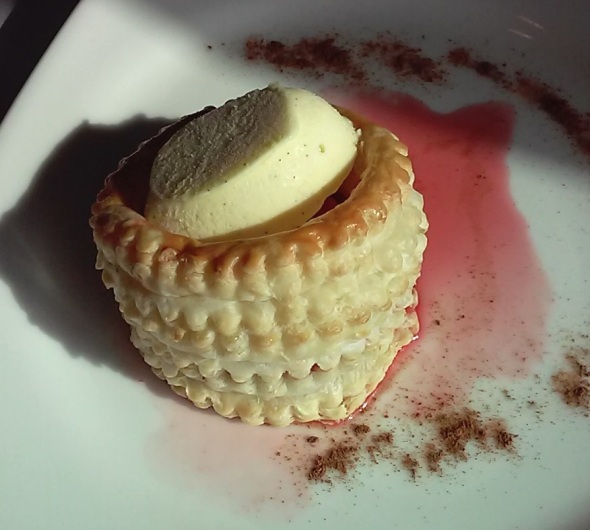 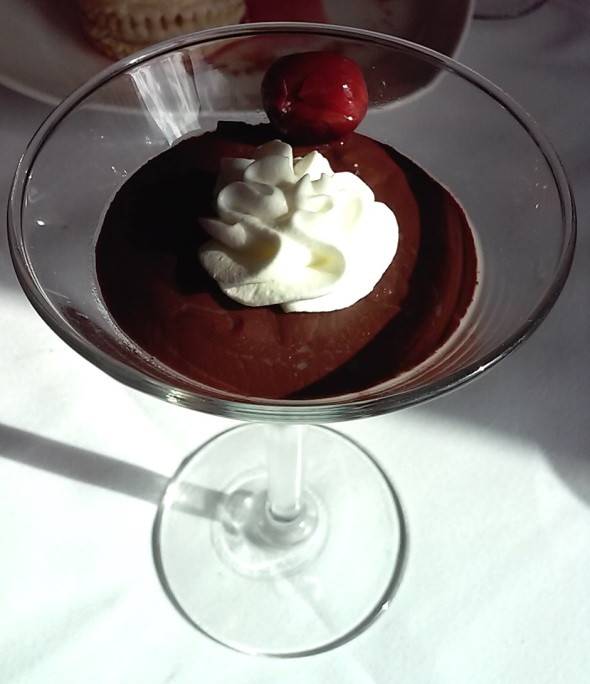 Needless to say both dishes were excellent. I can’t say enough good things about this place. Every time I go I leave satisfied and happy. Also I have been through different semesters so the fact that they stay consistently excellent is a testimony to Ivy Tech.