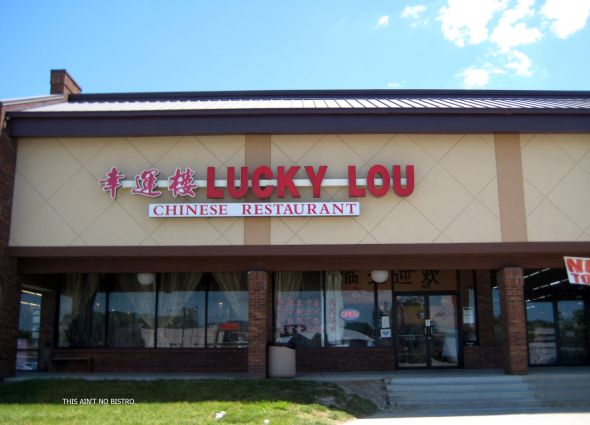 Also their Special board. This one written in Chinese.

Pat hit the nail on the head with his opening line. This is not your typical Indianapolis Chinese Restaurant. You know the restaurants. They all have the same menu, the one with steamed or fried dumplings for $4.95 and a $7.95 lunch special with egg roll and soup. The only variant being the name on the menu. That is not to say you are going to get the same meal at all the locations. You hand the same recipe and ingredients to 3 chefs you will more than likely end up with 3 different tastes. Chefs are, if nothing else individuals.

This place deals in the “nasty parts”. Lungs and intestines. You know the stuff that is never mentioned in “polite” Restaurant society. They even offer a small plate of Beef Offal with Turnip. However this is not what drew me here. It was Dim Sum. Small plates of different foods, typically dumplings or balls steamed or fried. However before I go into my dumpling lunch I must mention our lunch guest, Bob, a friend from school. He was in for a visit from North Carolina. He likes hot food. Very hot food. He ordered a diced chicken in chiles and ordered it as hot as possible. He ate it without even breaking into a sweat. 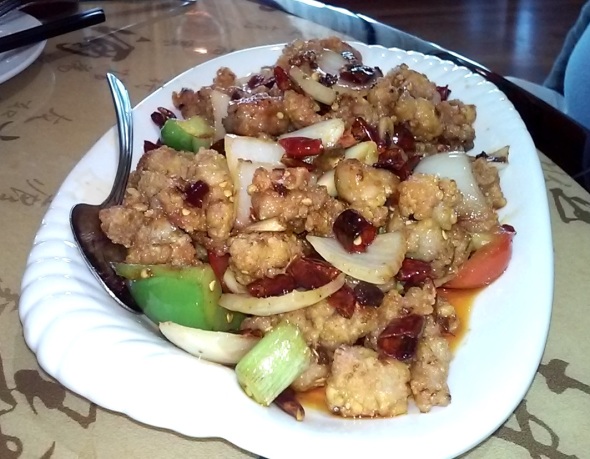 Lou’s menu is a big book loaded with amazing pictures. I scanned their carry out menu,which is very big as well. This will be posted on Zomato for anyone interested. As for the Dim Sum they have their own menu,complete with pictures. The prices range from $3.65 to $4.95 with the most coming in at $3.95. My first dish was a Stuffed Eggplant.

This was my favorite. Beautifully cooked eggplant stuffed with what tasted like minced shrimp and pork in a nicely textured dressing. It was covered with a sweetened soy sauce. As I said it was my favorite. For some reason it reminded me of Thanksgiving.

These Shrimp Balls were very interesting. They had the standard saltiness of a shrimp paste yet had the airy texture of a Southern style dumpling. I think I would have enjoyed them more with a dipping sauce of some sort. Something other than soy, hot chile oil or packs of sweet and sour sauce. 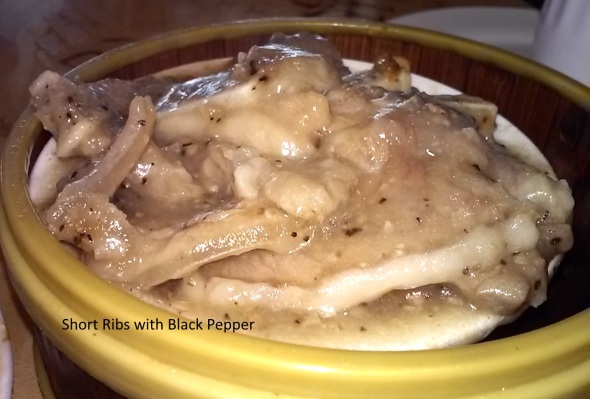 I have had Short Ribs at other Chines Restaurants before. The sauce may differ but they always have one thing in common. They are always chewy. The rib is never cooked long enough to become tender. I believe this is my first time for this type of sauce. It had a decent flavor and a slight pepper bite however it was a bit gelatinous from the corn starch. They served a goodly amount so I took them home and was able to “salvage” them with just a little effort. So the bones were there.

This was the oddest one for me. I have had shrimp and pork dumplings before but never like this. Other places served them like the twisted sort of ubiquitous dumpling you see at most other joints. As you can see these are far from small and twisted. These are large and dense. The filling is in a cavity inside.When you cut them the minced shrimp and pork is cradled like soup in a bowl it doesn’t come gushing out like jelly in a donut. The walls of the dumpling are about a quarter of an inch thick and the inner most half appears to be only partly cooked. The whole thing is chewy and the inside most of all. The filling was tasty enough but the dumpling had a sweetness to it that I found to be incongruous with the filling.

I enjoyed my dumpling lunch. Any issue I had was with my selections. The House upheld its end I may have just picked the wrong things for me. On weekends they bring in Dim Sum carts; like dessert carts in a fancy French joint. Now that I will definitely try.