We will accommodate allergies if possible.

From some reviews and comments I have read and heard, these two little lines have a few of my fellow citizens all worked up.

This is fly over country and folks here don’t like to be told what to eat or how to eat. As an occasional Libertarian I can empathize with that sentiment. However as a one time working chef I can see the reason for such a statement. A chef or cook spends quite a bit of time creating a dish for service. Taste, replication, presentation, sourcing, pricing all these things have to be considered.So naturally they want people to try it as they intended. That being said you must have some flexibility. If not you might just end up cooking for friends and family. 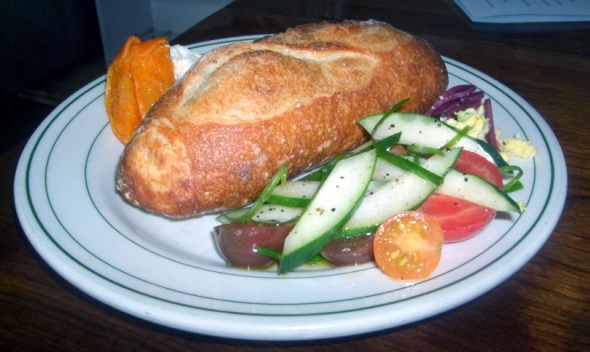 This was my “first course”. This is their toast plate. It features a lovely baguette from Amelia’s, and a nice little tomato and cucumber salad. Hiding behind the salad is egg rillette,topped with pickled onion. Traditionally rillette is a pork pate. Here it’s a chopped soft egg. Great spread on hot bread. On the far side sets their house ricotta, and the show stopper on the plate. Clementine confit. That is one of the craziest things I have eaten in a while. It’s tangerine segments cooked in hot lard. It was damn good. All of the components worked very well together. The slight acidity of the tomatoes to balance the richness of the egg and cheese but to me the star was the confit. This plate was a definite hit. Had I known that was what I would get I would not have ordered as much as I did. 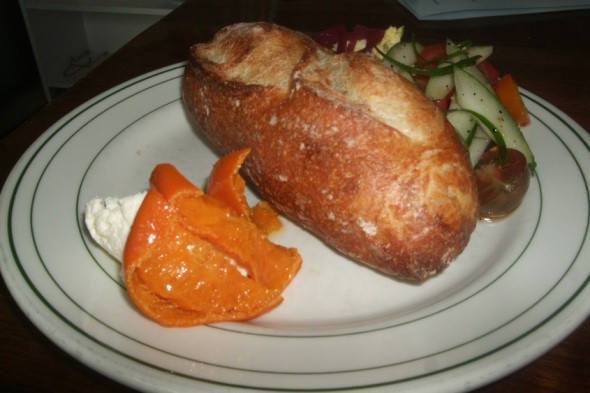 After ordering the bread before it even arrived my server was back and I order chicken livers, bacon and a bun. I figured I would be safe since some folks were complaining that the portion size was “small”. This joint has changed their menu at least 3 times since they opened,approximately 4 weeks ago. So I jumped on the chicken livers they offered. 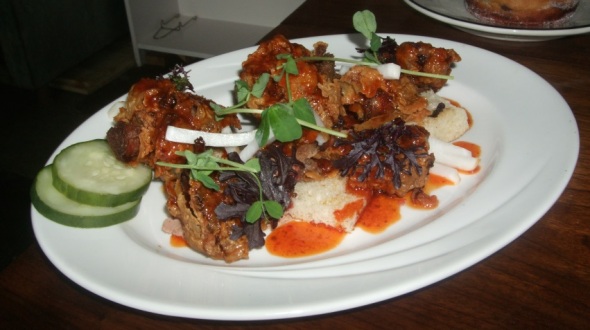 Now this is a chicken lovers fantasy plate. Six crispy fried livers sitting on a schmear of liver pate. In between the livers were two-inch square pieces of toast. This whole plate of decadent chicken liver goodness was covered with hot sauce. Not just any hot sauce but barrel aged sriracha. Now I have had the regular form of this hot sauce,but never the barrel aged stuff. They put the mash in whiskey barrels and give it a couple of months to “mature”. The resultant sauce is as different from the standard sauce as Laphroig is to Passport. And to provide a subtle taste difference they offered sticks of pickled white turnip as well. This plate was more than enough to sate a luncheon appetite and definitely worth the 10 bucks I paid for it. 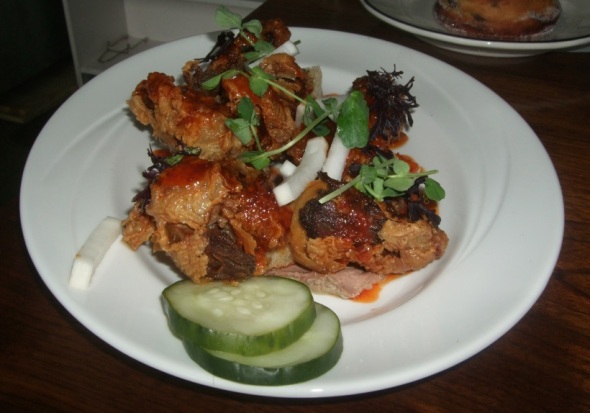 I was about half way through the first plate when I received the second. I told my server, Natalie to bring food out as it came up. I would find a way to keep up.

While I was finishing my livers my other food appeared. A chocolate and hazelnut bun and sorghum glazed bacon. 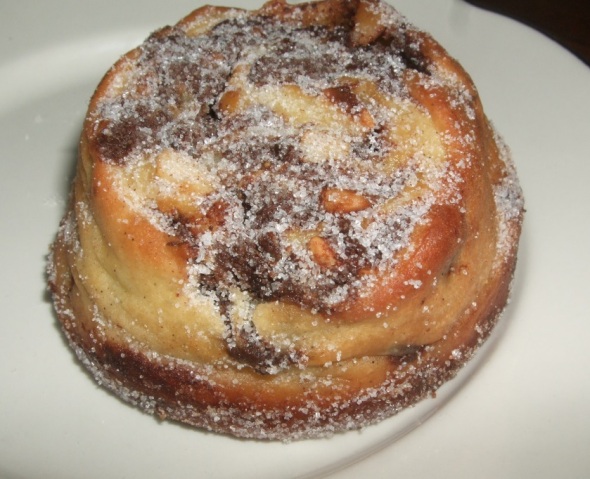 This bun was delicious. Period. The fact that it was $3 is remarkable. Almost as remarkable as the bun itself. I understand that their pastry chef is named Zoe. Well Zoe you have a new fan. What you do is possibly illegal in some countries.

The last thing I ordered was a $5 piece of bacon. Sounds crazy doesn’t it. What you get is a hunk of Smoking Goose bacon fried and then glazed with sorghum syrup. 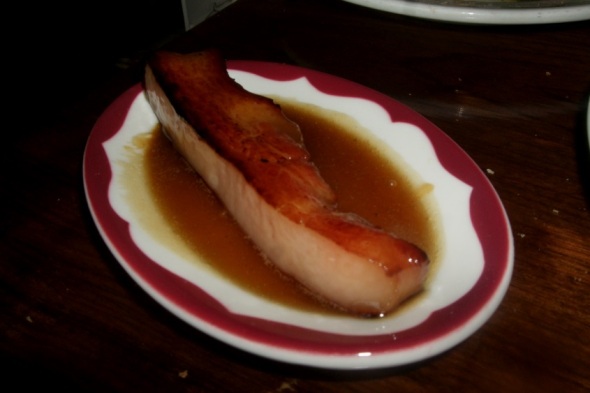 This  piece was huge. At first I thought it was a hunk of pig jowl, but after cutting it I would guess it was indeed pork belly. Fat, slightly smoky and sticky sweet from the molasses. An excellent job.

So as you can tell I enjoyed my lunch. A lot. I just have too questions. What is with the no capital letters on the menu? Also why the knit caps some of the help are wearing. Is that a fashion or a fad. I’m just curious. So this joint had an unequal amount of hype before opening. After eating here I can seen the reason for a lot of it. 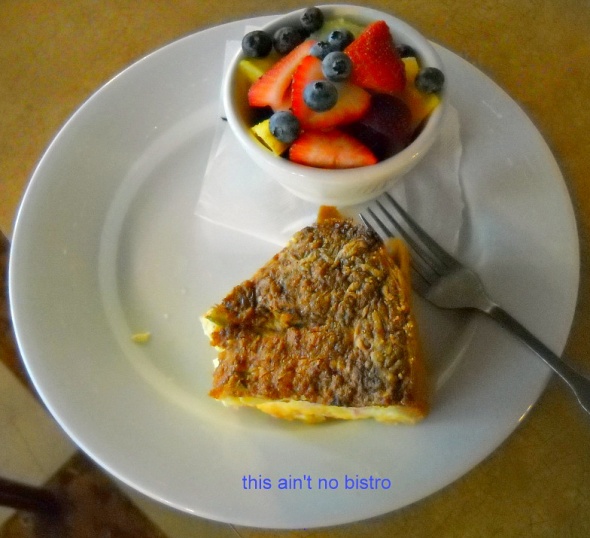 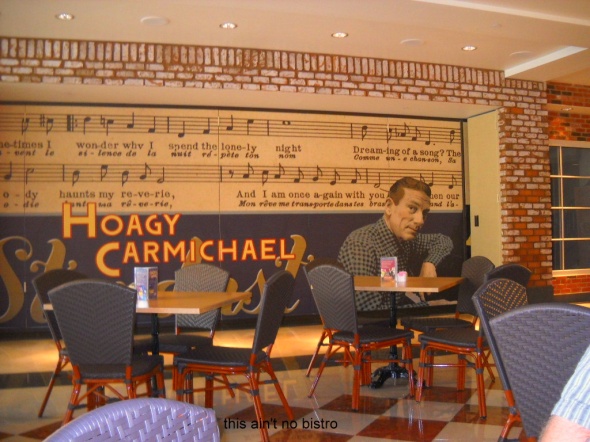 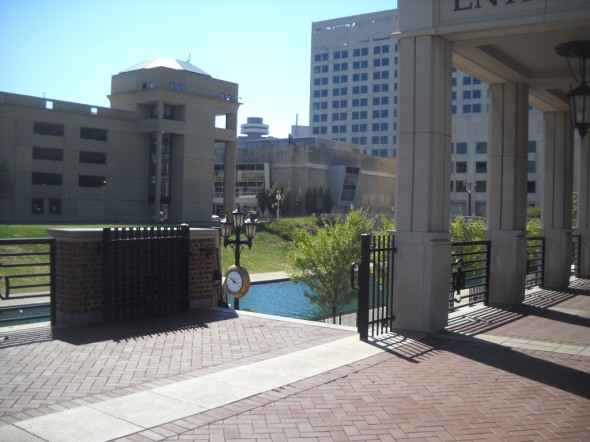 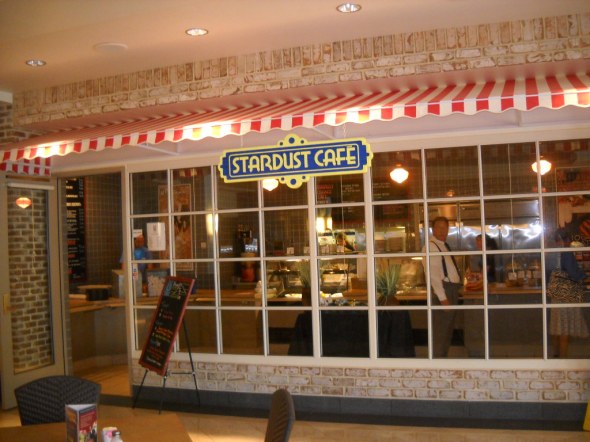 This past Thursday Pat and I decided to go to the Indiana Historical Society and try the Stardust Terrace Cafe for lunch.The cafe is named  in remembrance of Hoagy Carmichael;a famous Hoosier song writer,performer and actor.Among the many tunes he wrote you can include Stardust;hence the name.The place is attractive,neat and well-appointed and has a beautiful terrace overlooking the Downtown Canal.The food is handled by Hoaglin Catering;which has a fine reputation;and I believe they have a place of their own on Mass.Ave.Most of their menu;while extensive;is sandwich assembly.Now don’t get me wrong;I’m a big fan of nicely prepared sandwiches;and their selections were varied as well as interesting;we were just in the mood for some cookin’.And we had it on good authority they make a nice Quiche.And contrary to that old Playboy story;real men DO eat quiche.As you well know Pat CAN NOT eat onion;his body gets all weird ;so he asked about their quiche options and was reassured that the veggie one was onion free.Oops;not quite.He had to pull the thing apart to get out the onions;just to eat.He didn’t make a big deal about it;he is used to it.Lesson time kids;if you work a kitchen, and your kitchen builds something, know what is in it.If you don’t know just say so.I on the other hand can,and will eat damn near anything.My quiche was of the ham and cheddar cheese variety,Pat’s was supposed to be of the roasted red pepper and mozzarella cheese variety.Neither one was teeming with non egg ingredients.As under whelming as the filling was the crust was as exciting as tap water,and as tasty.The only thing that saved the lunch was the large soup cup of fresh fruit that came with the quiche.Fresh melon,strawberries,blueberries and even a little taste of pineapple.Beautiful.Oh and the chocolate brownie we got to share.A moist fudgie square with chocolate chips;delicious.If they made it, good for them,if they didn’t, no matter, they had the good taste to buy it.I wouldn’t discount this place for lunch though, by no means.The selection of sandwiches they offer is really impressive.I know I’ll be back,by myself or maybe with my daughter-in-law;they have ham salad and a good ham salad is a thing of beauty.