I had the pleasure of meeting my pal Joey for lunch Thursday. It has been too long since we saw each other. She works too much. She did agree to meet me for her lunch break so we decided on Texas Margaritas. It is a new place that opened on the site of the former Cancun Mexican Restaurant. The joint is decorated with Mexican style murals and booths.

I thought it was quite a display of art and color. I was reminded of that phrase “a riot of color” for that was surely what it was. They brought out some chips and salsa for me to munch on and to show my appreciation I ordered one of their Texas Margaritas that was on special that day.

The salsa was house made and hotter than most and the chips were still warm. It was a wonderful start to the meal. When Joey arrived it did not take us long to order. Her a shrimp quesadilla for $12.99 and me Enchiladas Ranchers for $9.99. The enchiladas was a plate of 4 corn tortillas stuffed with ground beef, shredded chicken, beans and cheese, then covered with a red sauce, white cheese and lettuce tomato and sour cream. I also added a dish of pico de gallo for $2.25.

I nearly forgot to take a shot of my plate and I didn’t bother Joey to take a picture of her quesadilla that would just eat into our talking time. We only had an hour to catch up on stuff. She did enjoy her shrimp quesadilla but not the rice. It is unfortunate that so many Latin joints feel obligated to add rice to their menu when so few do it well. My enchiladas were very good. The red sauce they used was very tasty and I enjoyed the 4 different fillings. I should do that more often.

So I think this joint is definitely worth looking into. Good food, good service and fair pricing. Also you won’t be bored with your surroundings and if you can, have that meal with a friend so you can catch up on stuff.

This little joint was across the street from the garage that was servicing my vehicle. The name makes it pretty clear what to expect. Of course they do offer other items but I was here for the tacos, and maybe a burrito.

The place is small but bright and clean with a rather extensive menu. All of the items are on a board and you order at the counter pay and pick up when your number is called. I got there a little past 11 and they already had customers. From the time I arrived until the time I left they had a constant stream of customers. Mostly ordering take out.

The amount of meat used was amazing. Granted they use a 4 inch tort but the ratio of meat to tortilla was impressive. They offer 2 sauces. One green and one red. That is what you see on top. I found both tacos to be delicious. The pulled pork butt was a touch dry but that was rectified by the sauce. The steak had a chile presence that gave it a bit of heat. I know I have a tendency to over state when I really like something but Damn those were some great tacos.

Naturally my eyes were bigger than my appetite so I ordered a small burrito as well. I went with a ground beef. They added lettuce and tomato inside with the beef and cheese. That too was a hit. I think I would have appreciated it more had it been the first thing I ate.

I know I will be back. A taco this good for only 2 bucks cannot be ignored.

Right up front I wish to apologize to all the readers who come to this blog for information about locally owned restaurants. Mom and Pops. if you will. I thought this was a small local chain, like Mr. Tequilla. I was flat-footed wrong. I was enticed by the lure of a Hatch Green Chile Chicken enchilada. As it turns out the chain is far from small or local. But I had lunch there so….

Without getting in the weeds on Botany or Geography I must first explain Hatch Chiles. Hatch is a small town in Southern New Mexico,it is not a pepper. It is noted for the chiles it grows and has a yearly festival. The varieties they grow probably vary as the Universities are always experimenting on new and improved varieties. I am familiar with the Big Jim and a couple of others I can’t recall. In either event these chiles are Extremely popular in New Mexico;or at least they were when I lived out there. And they are addictive. So although I have been clean for 20 years I thought I needed a taste. 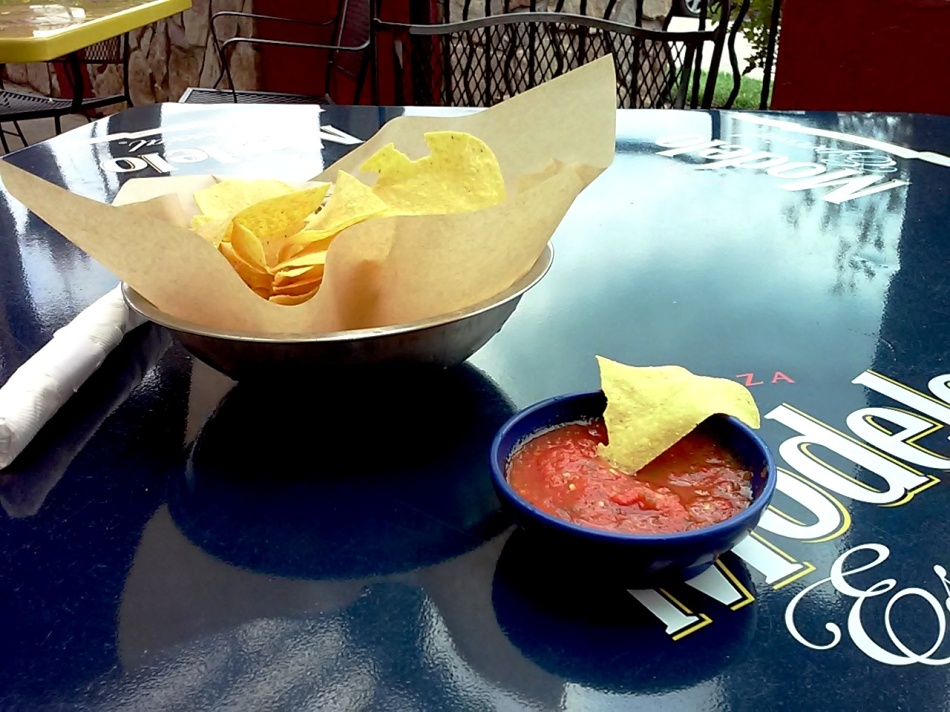 Their salsa had a bit of zip but it was thin and had cumin in it. To me you don’t add cumin to salsa. And why do people cut their tortillas into quarters to fry for chips? They are too big.

The margarita was pretty good. It was a Grande for $6.99. It was pretty nice sitting outside with music in the background and a cocktail in hand.

Now for the main dish. My Hatch Green Chile Chicken enchilada. Were the chiles truly Hatch. Nope. Hatch is too small of an area to produce a whole bunch of peppers. Were they authentic New Mex peppers? Possibly. I recall that there is/was a brand of canned green chiles called Hatch. They were from Deming, a small town in New Mex. But pedigrees aside how did they taste? The sauce looked familiar and the flavor was a bit reminiscent, however they were a tad stingy on amount they used to covered my enchiladas. The chicken itself was okay. A decent amount but the flavor wasn’t anything to write home about. As for the beans. So so, and the rice;who thought tossing a few kernels of corn in was a good idea? Overall There are a bunch of truly local joints that do it better. I just had to chase a memory I guess. And I was satisfied.