Bazbeaux is probably the first “gourmet” pizza joint in the city. That is to say the first joint to offer toppings other than pepperoni, sausage and mozzarella cheese. They opened about 30 years ago and are still pretty popular. They started in Broad Ripple and then expanded to Carmel and downtown Indy.

Patrick has long insisted that we have already reviewed Bazbeaux. My contention was no, we haven’t. We were on our way to some Mexican restaurant on the South side when Pat commented on an article from Nuvo. The article was about local pizza joints and of course Bazbeaux came up. So we decided to go there instead. We didn’t realize that this location was serving a lunch express only. That is when you stand in line to order a slice, some cheese bread or a side salad.

Definitely NOT a Sahm’s salad 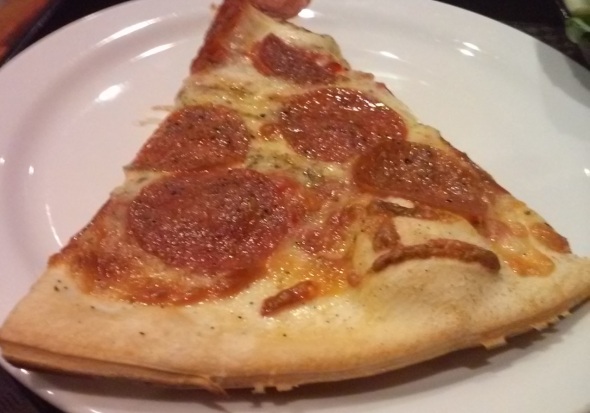 I believe they had 4 pizzas that day. Cheese or Pepperoni for $2.75 or a slice of Greek pizza or a BOT for $3.25. I opted for a slice of BOT; which stands for bacon, onion and tomato.

For some reason they added a chiffonade of basil on the top. Having a fresh herb on the top of a hot pie can be tasty at times but when the pie sits under a heat lamp some of the flavor is lost. The pepperoni was fine. Both slices  were fine. Nothing special. A pizza may stay warm on a heated buffet and under a heat lamp but it certainly does not improve the flavor. From the size of lunch crowd this format has probably increased its business but I think the food may have suffered. Of course one could make the point that if people keep coming in what does it matter.

Should I try this joint again it will be at a location where I can get a pie made especially for me.

Okay. I have messed this post up already. This is the second joint we visited today, with the raw cafe being the first. So I should have written this first so it would be seen second. That way it would have a logical sequence. Oh well.

After our first course we needed some meat. This burger joint started out as dinner only but a few weeks ago they started serving lunch. During lunch they use a smaller version of their menu. No appetizers and most of their speciality burgers aren’t on there. Pat decided on their classic for $9 at lunch with chips instead of homemade fries. That is their basic Angus burger with cheese and usual cold set. 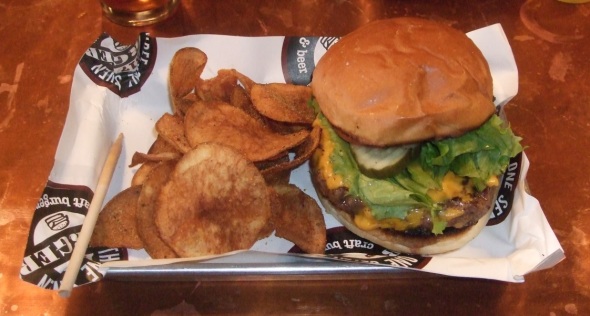 When I asked our bartender about their speciality burgers he told me they could fix anything on the menu. Which I thought was very nice of him. I had my eye on the Parthenon. A lamb burger with “gyro bacon”, feta and tatziki sauce on a pita; with fries for $12.

My burger was more than the mid rare I ordered and the “gyro bacon “was sliced gyro meat. I guess they figured that some crisp strips from a gyro cone would give a bacon effect. Well the overall flavor was very good but I think some lamb bacon from Smoking Goose would do a better job. As for the over cook that was just an all around goof. The meat had a bit of pink to it so it wasn’t  rendered uneatable, and as I said it was tasty. As far as the fries went they were your usual limp house cut fries. Tasty but not real crisp.

So all in all they offer a pretty good burger. I would like to try one of their regular Angus burgers and see if they can do one medium rare.

I was on the north side with my son Adam on the way pick up his eldest daughter; my first born Grand child in Noblesville. After we picked up Emily I thought it would be a good idea to get some carry out. Adam suggested Sam’s Gyros at 8922 East 96th Street. He has been there several times and liked the food. He ordered a Chicken Shawarma platter with salad and rice for $13.95. Emily got a half Beef Shawarma in pita for $5.95. I got a Beef dolmades platter with salad, no rice for $13.95. Both platters came with 2 warm pita as well.

After I unpacked the lunch Em attacked her pita bread sandwich with great enthusiasm. She had never had beef shawarma before and obviously really liked it. Poor thing is trying to gain some weight. She starts Ball State this fall. As a matter of fact she leaves in a couple of weeks. In either event I didn’t have the opportunity to take a shot of her sandwich.

Adam’s chicken dish was plentiful and he really liked it. I had a taste and I wasn’t overly impressed. The inclusion of 2 pita breads was good on his dish. I mean you could stuff the bread with chicken and rice.

As I said before both platters came with salads. This is the aforementioned salad. While large not real impressive. Standard torn lettuce minimal cucumber and tomato, a few olives and a sprinkling of feta cheese. Ho-Hum. The dressing was nice and it worked well as a dipping sauce for the good pita that came with my dolma.

As for my dolma they were very good. For some reason grape leaves with beef are difficult to find. That was why I was excited to see them on the menu. Their version  was long and slender with a great taste and nice texture. Their tatziki sauce was pretty good as well. Again it was a great sauce for pita dunking. 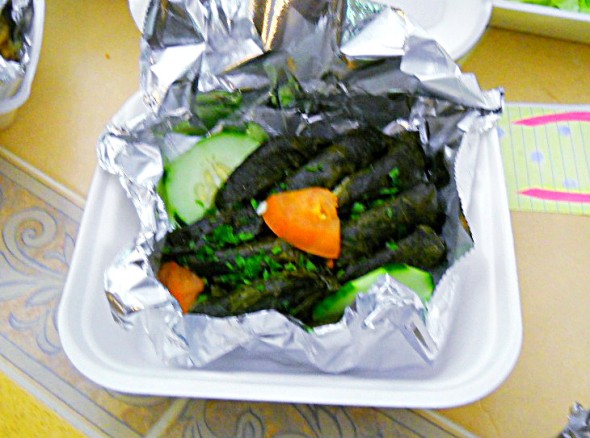 The amount of dolma was nice. It was a very tasty and filling plate. I just don’t know if it or the shawarma  were worth the $14 price tag. Maybe if I saw it on a plate at a table I might think otherwise. Elements of the lunch were very good. But as always it is up to the individual consumer to decide the value.