This is indeed a bar. A tavern. I am sure some folks would call it a dive. They would be wrong. It is a big old-fashioned place that sells Adult beverages and well made food. They aren’t too worried about food trends and I am sure no one in the kitchen dreams of James Beard. The bartenders and servers are just that; not mixologists or Flairtenders. They have done the job for a while and do it with both professionalism and a smile. I am a big fan.

The Ice House is a big building sitting in an industrial area all by itself with the sign on top of the building. Like a road house from days gone by.

They always have a big lunch crowd when we go there. If you try their food I think you will see why. 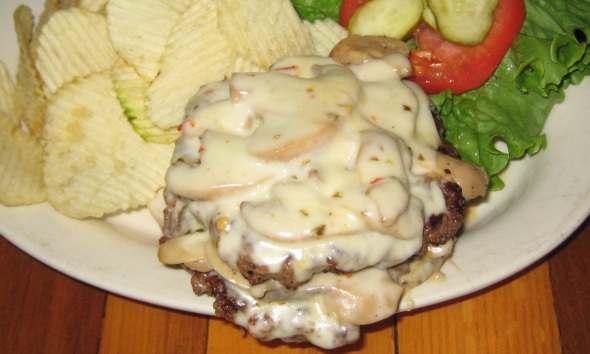 This joint changed owners a few years back and the prices are indeed fancy. The double Pat got was $12.50; but when you consider the extras they include and the fact they only charge $.75 for cheese I guess it balances out. The real values are in their specials. On Wednesday they offer a 6 ounce fillet for $10.95. Included in the price is a salad and a hash brown potato casserole.

Several taverns offer a 6 ounce fillet for 10 to 11 bucks but this one; I believe; is the best around. Moist and tender. Hot with just the right amount of char and most importantly it was cooked mid rare. The potatoes were an interesting dish. It was tasty but I just didn’t want that many carbs for lunch.

Another big item on their menu is broasted chicken. For that you will need a hardy appetite. I really enjoy this place. People talk a lot about “keeping it real.” Well this is one joint that does nothing but. Keep it real. 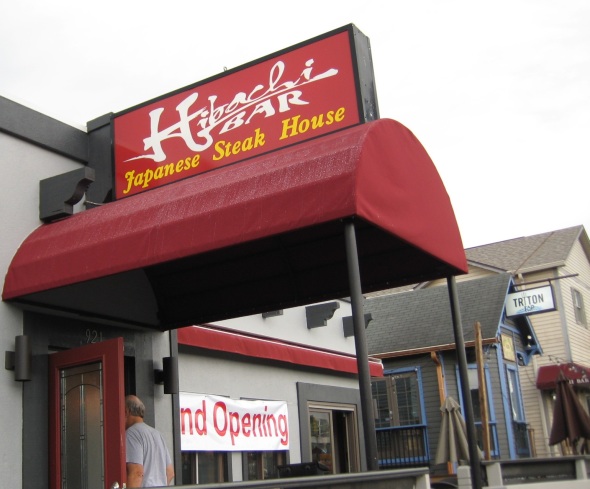 Well Broad Ripple has one more new joint. This is Hibachi Restaurant. New for the Ripple scene. It is located where the Sabbatical used to be. Curiously that’s right next door to the Triton Taproom and the Sushi Bar. The Hibachi Bar is owned by the same folks who have the Sushi Bar. All they need is one called the Tempura Bar for a true hat trick.

All of the seating is for Hibachi. So you get a show even if you order from the hot kitchen or the sushi kitchen. 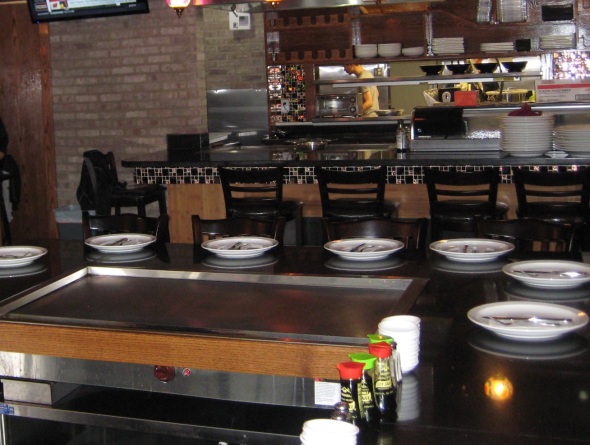 This is their basic dining unit. In the background is the sushi bar. Their menu is an odd Frankenstein affair. Cut and paste with several items marked off. Of course this is only their first week of operation so I am sure they will be making adjustments along the way. Being true to their name they offer a lot of steaks and combos with fish. They also have a few noodle dishes ( from the kitchen) and Teriyaki Chicken as well as salmon.

Funny thing about the sake. The chef had it in a big squeeze bottle. I figured it was just water and the sake bit was a joke. When Pat told me it was indeed sake I was jealous. Hell Pat doesn’t even like sake. Oh well. I ordered Yakisoba. That is  a buckwheat noodle dish cooked with veggies and a protein. I opted for chicken.

I thought this dish was excellent. The chicken was not overly abundant but the overall flavor and amount made it an excellent value at $12. I especially liked the tender crisp celery and its crunch.

About the prices. I thought the pricing was reasonable. They feature strip steak and filet mignon as well as ocean-going sea food, which ain’t cheap. Pat’s Teriyaki chicken was only 9 bucks. And in celebration of their Grand Opening they were offering a 15% discount. So I don’t see the pricing as a problem. I can only image things getting better for this place. I think it is a nice addition to Broad Ripple.