Ode to the Hush Puppy

I think that I shall never see

a treat as tasty as the Hush Puppy.

Its shape is compact and really quite spherical.

It’s flavor is sweet and truly most lyrical.

Its reputation has been tarnished and maligned for years,

but the taste of one can bring a grown man to tears.

For all you folks who like a plate of fried fish

you can’t help but grin when puppies are added to the dish.

Be it catfish or cod. Crappie or gill

You must admit hush Puppies just add to the thrill.

So whether you eat in a restaurant or pub

If they don’t give you hush Pups your fish is just grub.

Well, back to Wanamaker. This Wheatley’s place is very well-known and highly thought of in Wanamaker, and elsewhere. It started out as a grocery store but has since turned to cooking the food before they sell it. It has the oddest hours though. They are only open for business Friday, all day for a fish fry. Saturday morning for biscuits and gravy and Sunday morning for breakfast and fried chicken dinners for the after church lunch crowd. And even with those restrictions they are seasonal; closing up in October. We missed out last year and we were bound and determined to check it out this year. Now, I surely do not understand the fuss. From what people had to say about the food I expected some gum smacking’, salivating fried goodness. Well not quite. It was pretty average. We both had too high of expectations. The fish appeared to be ocean perch. However one review said they used pollock. I am pretty sure it was perch but I think it was priced a little high for what you got. The dinner was $10.49; for 3 pieces of fish, crinkle cut fries, a solo of cole slaw and a portion of so-called baked beans. Oh, and a hush puppie. One hush puppy. The pups were house made and pretty good, with corn kernels mixed in. You could buy them ala carte. A quarter each or 5 for $1. You waited in line to place your order. The fried stuff was stocked under heat lamps and your order was placed into a to go box; whether you  carried out or ate in. And then you got a seat at one of several picnic tables in one of two large rooms or outside on a covered patio.

The fish may have been crisp when it was put into the box but once that lid was closed even the short walk to a seat sort of wilted it a bit.

If you look real close you can see the hush puppy under the fish, at the bottom.

I just had to take a picture of one of the tables. They all had seats like that. Have you ever seen such seats. Pat was a little more frugal than I. After all it was his turn to buy. He ordered a 3 piece fish with fries for $7.99. 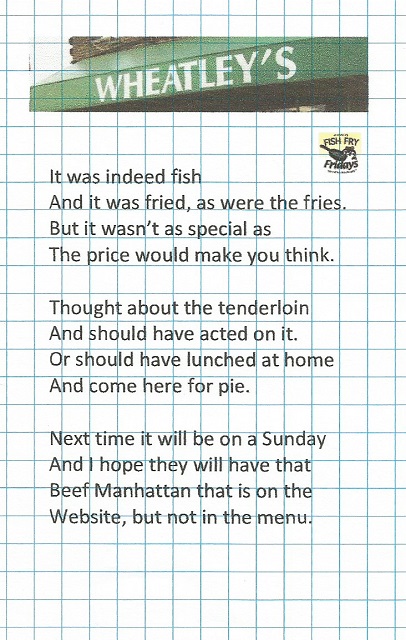 So neither one of us were too impressed with the fish fry. However they do have desert. Home made pies and cake. I did not take any pictures of the desert case; because we would be tempted to buy something. My O my the cakes were 6 inches of chocolate delight. And they had a deep dish apple pie that stood a full 5 inch high. Truly this joint is sort of a case where they show a whole Lotta’ hat and no cattle. Like the joint last week.