One thing about Broad Ripple,vacant buildings don’t stay vacant for long. I would consider Chiang Mai’s new home prime real estate. Of course I know nothing about real estate I just think that this is a great location. It is a free-standing building with parking, across from the canal. It also has a nice new outdoor patio. Alas no water view. But they do have sake. 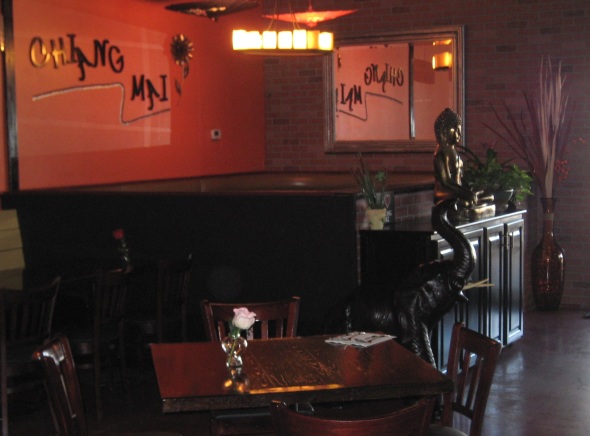 I like Thai food and I especially like noodles. This joint is the closest Thai place to me so I expect more trips. Since it is so new there hasn’t been very many reviews. The ones I have seen have all been complimentary. The only one half way negative was the fellow lamenting the lack of a lunch menu. Even he liked the food he just didn’t like the dinner portion or price at lunch time. That has since been changed. They offer $7.95 lunch specials,like so many Asian restaurants offer. Soup, salad and spring roll in addition to the main meal. Once again I ask, rhetorically, how can they do this? However they handle it I am glad they do. 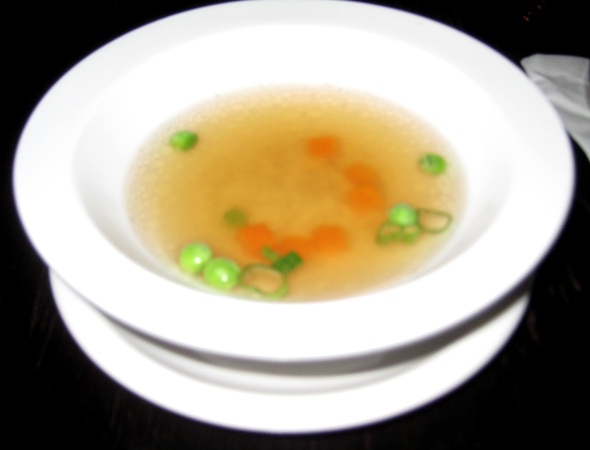 The soup was a very mild broth with,as you can see a few tiny bits of veg. It was okay but nothing really spectacular. As I have mentioned before I love Asian style noodles; especially rice noodles. So I fell back to my default Pad Thai. All of the specials offer choice of chicken,pork, beef, tofu or veggies. For a $2 up charge you can get shrimp. Feeling luxurious I opted for the shrimp. 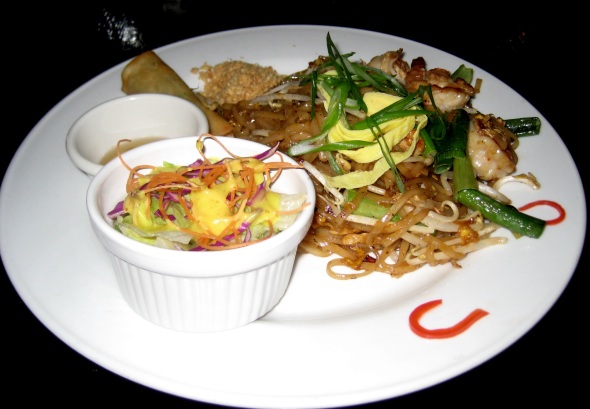 I think you can see from the picture one way they are able to sell a 8 buck lunch and be profitable. The salad is a small 4 ounce portion and the spring roll was on the small side and didn’t really taste house made. Not a complaint,just an observation. Both the salad and the roll provided a nice textural element to the dish. As far as the Pad Thai goes it was very nice. An abundance of noodles with a bit of veggies and peanuts and that ubiquitous Thai sauce. It was a delicious dish well worth going back for. 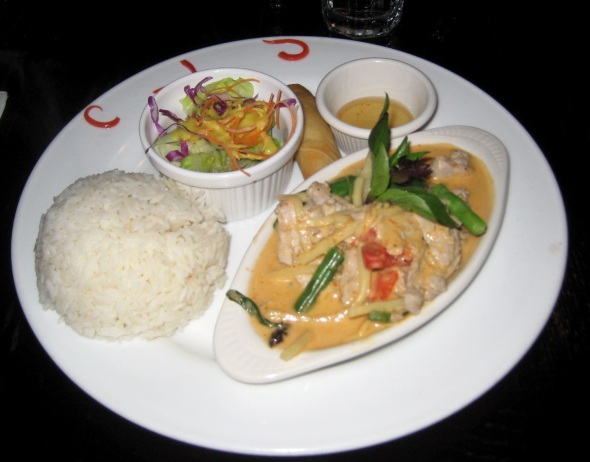 I think what Pat was referring to about the pricing was the dinner entre pricing. However I didn’t think they were that outrageous. The dinner prices were predominately $10.95 and up to 12 to 14 dollars. I really don’t think that is too outrageous for a dinner. As a matter of fact the next time I go I am doing dinner. I figure that a $10.95 Pad Thai would have more of the stuff that makes me liked it in the beginning. I am glad that the old Mid Town Grill has a new tenant and I hope that their stay there is long and pleasurable for everyone.

I just had one of the best lunches I have had in a long time, pho sure. Admittedly my knowledge of Asian cooking is limited. I have had Vietnamese food a few times. So today was a wonderful treat.

We started off with 2 appetizers. Spring rolls with fish sauce and Goi rolls with a special plum sauce. The spring rolls were typical deep-fried won ton wrapped pork and veggie rolls. The atypical part was the fish sauce. It had a slight sweet and sour effect. More like a gastric than your typical “duck sauce”. It also had shredded daikon and carrot that added a slight textural difference that meshed well with the savory sweet sauce and the fried pork and carrot. And this wonderful little plate was $2.49.

As for the goi rolls. My o my. Large rolls of,shrimp, pork, veggies and rice noodles in rice paper. They were as tasty as they were pretty. The sauce they served with it was a plum sauce with roasted peanuts. Plum sauce is slightly sweet with the viscosity akin to apple butter. It has a small savory component but when you add the peanuts it blows up. The texture of the nuts, the almost smokiness of the roasting;very impressive. And you too can experience the delight for only $ 3.20

For my main dish I had to try the Rare Beef Pho. Tender slices of beef and rice noodles in a beef broth. That might sound tame enough but the hook is the accompanying plate of condiments. Fresh Thai basil, lime, cilantro and a few slices of fresh chile. The idea is to add the veggies to your bowl to infuse it with the flavors. The aroma is amazing. The taste is beyond that. The bowl was full of meat and noodles and I ordered the small, for $7.95. 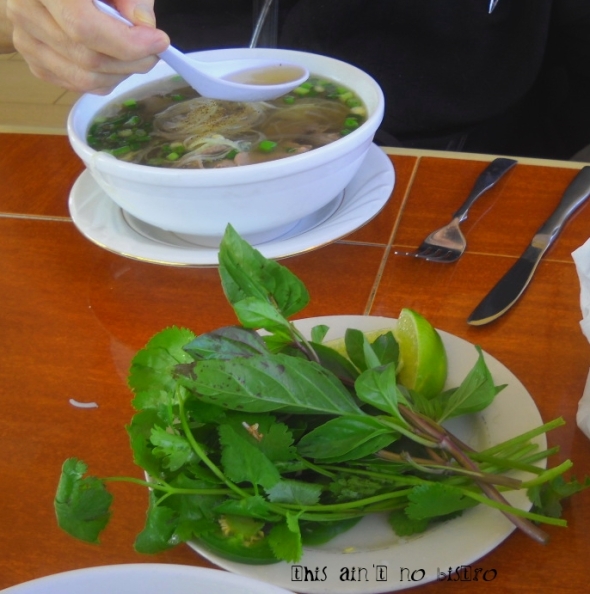 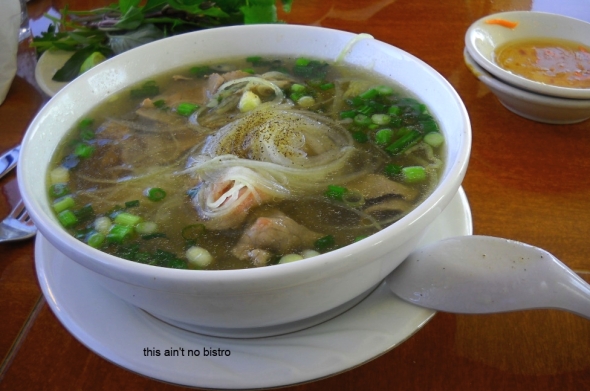 So… pho a really great and economical lunch you gotta’ go to Pho 54. I scanned the menu and I was going to make a pdf. But I decided to include a link to their website instead. I am going to put the menu on Urbanspoon. So everybody can see what they offer. 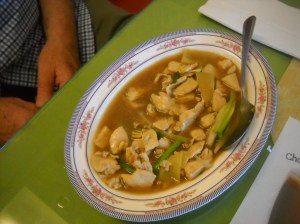 In general, Oriental food is a mystery to me. That’s why I was looking forward to having lunch at Chin’s, a Burmese restaurant. The menu isn’t as large as a Chinese menu, which has hundreds of dishes utilizing a handful of ingredients in skillful and imaginative combinations.I cannot remember the name of the dish I ordered , I couldn’t pronounce it anyway. It was a large portion of fried rice noodles mixed with chicken, veggies, fried egg and ground peanuts. The preparation was similar to a lot of far Eastern dishes I have eaten. You could  taste all of the individual ingredients and yet at the same time the harmonious blending created an additional flavor profile. Definitely a case of the sum being greater than all of its parts; or whatever that adage is. They served a wonderful sauce on the side for both our dishes. It was a small bowl of fish sauce with chopped pieces of tiny green chiles. It was fantastic how something so simple could taste so complex. The fish sauce was slightly sour with a slight smokiness and the chiles brought a wonderful heat to the entire sauce. You could pour as little or as much as you want and you’re good to go. I don’t recommend eating the little green peppers, unless you have a high tolerance for hot food; something I no longer have.

Pat ordered something simpler; a bowl of braised steak and thin sliced fresh ginger.He found the meat tender and tasty. The ginger permeated the stock enough to add a slight heat, distinctly different from the heat of the chile sauce. The cooking of the ginger, subdued some of the heat but little of the fragrance. If you haven’t eaten fresh ginger before it has kind of a “bite” similar to a hot pepper. Pat also got a huge mound of fluffy white rice to go with his meat. Right after we started eating our server brought out a complementary bowl of soup. It was pretty simple, chicken stock and fresh cilantro.Since we were rice rich, we added some to the soup. The soup by itself, with the added rice, and some bread would make a nice lunch; all by itself. Speaking of bread. I believe they have two types of bread they serve. I had wanted to order one, just to check out Burmese baking; but I forgot. If any of you go there, try some bread, and let me know how it is.If you check out their website the menu you will find is a smaller version of the “real” menu. And when you go you can get all of your international shopping done. Right next door they have a grocery featuring all sorts of Asian products. Around the corner is an international market with fresh produce, meat and fish. In the corner of the strip mall there is a Mexican market and bakery. Remember what they say; think globally, but eat locally.And the whole lunch cost less than $13.

After such a great lunch, we needed some time to digest; so we drove to the Three Pints brewery in Plainfield. They offer six house brews plus one guest brew at all times. They don’t offer flights, but they do offer 4 ounce glasses for one buck each. And on Thursday their house pints are only $3.50. That day they offered one oatmeal Stout the rest of their menu leaned more towards the ale variety. I especially liked the Plainfield pale ale and their Retired Red Ale;both have a nice citrus note and a good hoppy finish.Remember what they say; distance is no object when in search of a finely brewed beer.