This is their sign facing 116th Street. I don’t even know if there is a functioning door on the front. The parking is on the side. Where there is definitely a door.

This is a relief beside the door off the parking lot. It is sculpted from clay and embedded in the brick exterior wall. Worth the trip just to check it out.

As we often do we started with an order of mushrooms for $7.99.

They give you a bunch. A basket full of hot and crunchy ‘shrums. We consider them as good as that served at the Checkered Flag. Which says a bit. 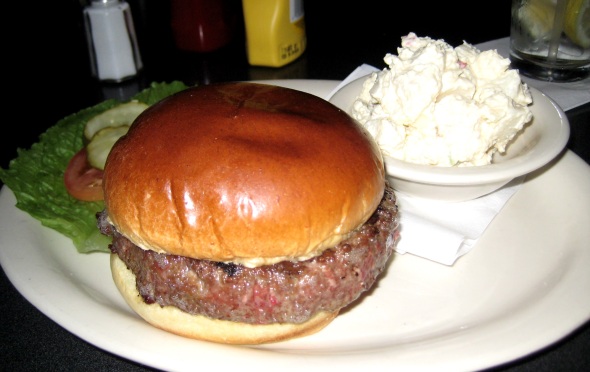 I was torn between the brisket and a bison burger. The thought of a bloody hunk of meat won me over and I settled on the bison, mid-rare. As you can see it was a large patty; nearly an inch thick and it was cooked perfectly. Sometimes some joints won’t cook ground meat anything less than 160 degrees; which is a bit more than medium. This was as I wanted it. They use a Brioche bun comes from S. Rosen’s from Chicago. It was wonderful. A shiny soft top and a tender and sweet interior. It was a perfect foil to a mid-rare burger. For sides they give a choice of several different options. Except fries. Fries are a 99 cent up charge. I got the potato salad. It is a brand I am familiar with and like. It was a grand lunch for $10.99/ Pat’s fish was $9.99. pricing you would expect for Fishers. 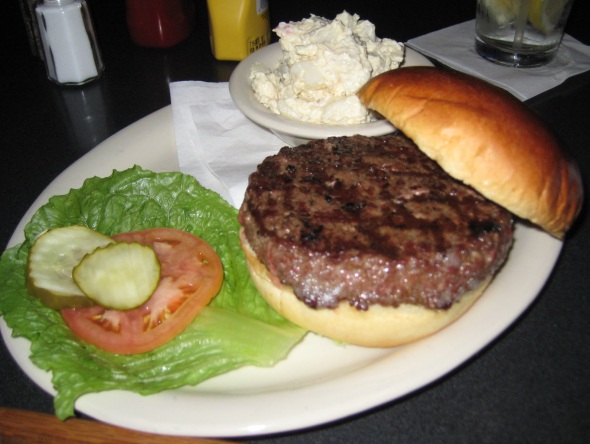 This is another member of the R. Lux family of restaurants. We have been to everyone; except for the Meridian. Maybe we’ll do that for the Holidays. The place is very comfortable and the service is as good as the food. Our server/ bar tender, Brenda did a Masterful job. She also makes a wonderful Margarita; which they had on special today for 4 bucks. So I think this joint is worth the trip. Even all the way to 116th Street.

Today we headed North to Fishers; the high rent district. It seems as though the new breweries,with few exceptions,have bypassed the far north of the Metropolitan area. That is why I was surprised when I realized that I had missed this one. It is a new construction in a strip mall in a heavily traveled area of the North side.

It is an attractive joint and the brewing equipment is highly visible as you enter. 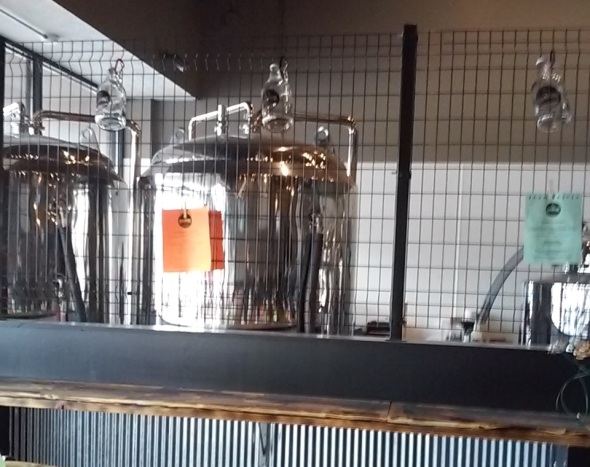 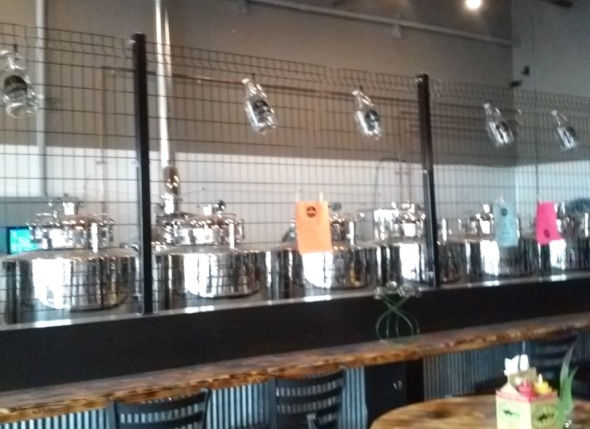 As soon as you walk in you are greeted by the large semi-circular bar in front of you and the aroma of smoked meat and brewing beer all around you. If that doesn’t get your appetite up and running you are a lost cause.

The menu offers some unique items not usually found on a beer joint’s menu. Battered and deep-fried artichoke hearts or a basket of hush puppies on the appetizer menu. The artichokes at $7.49 are reasonably priced,I supposed, as I have never seen them on a menu around here. I do question the pups being priced at $8.49 though. I think across the board the food prices are a bit higher than what you would find at joints closer to the city.

We thought the beer they brew is excellent,having a beginning,middle and finish. Something desirable in food as well as drink. The pricing is from $5 to $6.50,with imperial pints selling for the higher price. That is the going rate for a lot of microbrews. They do offer a flight of 6 5 oz. glasses for $10,but I was told they would be raising the price to $12. So that may be incentive to go sooner than later. 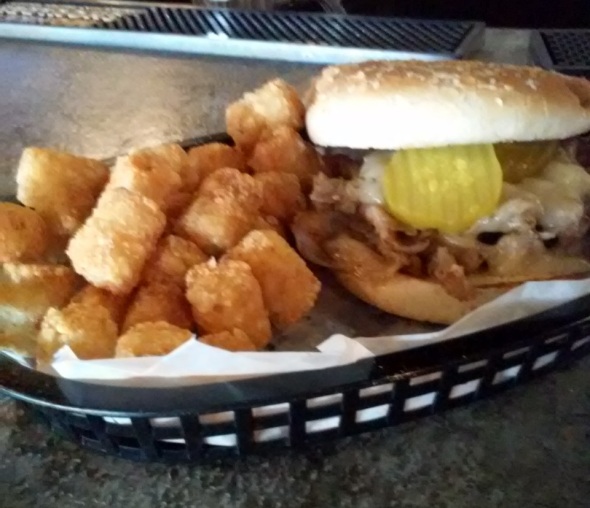 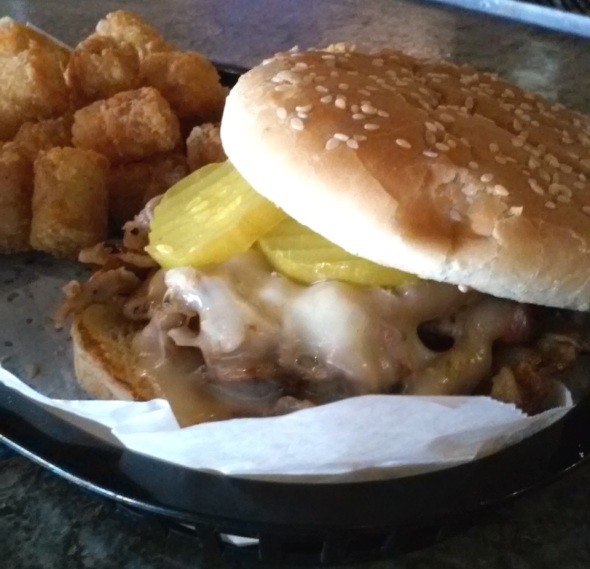 Pat’s sandwich was $10.49. Frankly I thought that a bit high for a below average portion. If I may digress a bit on the sliced vs pulled “controversy” pulling as opposed to slicing would save some money.

The sandwich I ordered was unique to me. It included items that I would not necessarily put together but I was intrigued. Here is the description from the menu.

It wasn’t a huge sandwich but it was a more than adequate sandwich. Each individual item,though minimally portioned collectively made for a very good sandwich. You could taste the shrimp and the bacon as well as the pesto. Too often basil pesto is added to a sandwich and it is as though they changed their mind at the last-minute and the amount is so small you don’t even notice it. Basil isn’t that expensive. So I say, if you feel as if you need to add it then slather it on there. I could taste every element except for the avocado. Poor avocado. People invite it to their sandwich but treat it so poorly it leaves without making any statement at all. In this case I would have enjoyed no avocado and a bit more bacon. As for the pricing,that is a tough one. You don’t see a shrimp BLT that often so how do you price it? I guess $10.49 is as good a price as any. 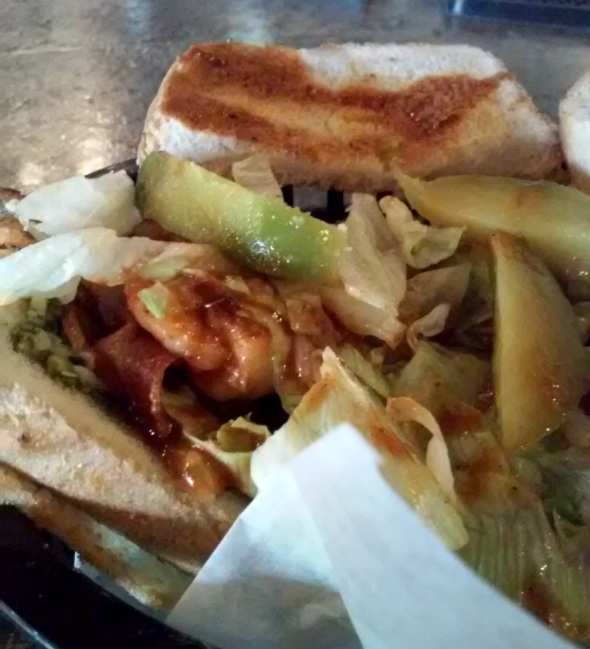 I am glad the North is getting a taste of craft beer. Most of the new breweries are in the old city limits and folks in Fishers get thirsty too. So. In summation Redemption is a lovely new facility with great service and wonder folks. The beer is good and so is the food. They have outdoor service,where dogs are allowed. Also kids are allowed until 9:00. Here is a link to their website
http://www.redemptionalewerks.com/home
They are also a full service bar and offer whisky flights. In case you want more than just beer.