Flat 12 is the brewery that housed Hoagies and Hops. It was independent from the brewery. As I understand Turn 3 is an adjunct to the brewery. They have only been open for about one month and they are taking it slow with 4 items only. Curiously all of their food is breakfast oriented.

The only thing I really wanted to try was the dish the joint was named after, and I was dubious of that. I couldn’t develop much enthusiasm for a “battered” chicken breast. As it turns out the chicken was coated with a “waffle breading” and I was more than happy with the results.

The chicken breast was beautifully crisp, plump and moist and the waffle was as good as any I have had. They only have Sriracha in-house. That is an excellent hot sauce I am just accustomed to a more Louisiana type sauce with its vinegar tang. They serve 2 solos of syrup but ask for their Sriracha and honey blend they are experimenting with. It works really well. 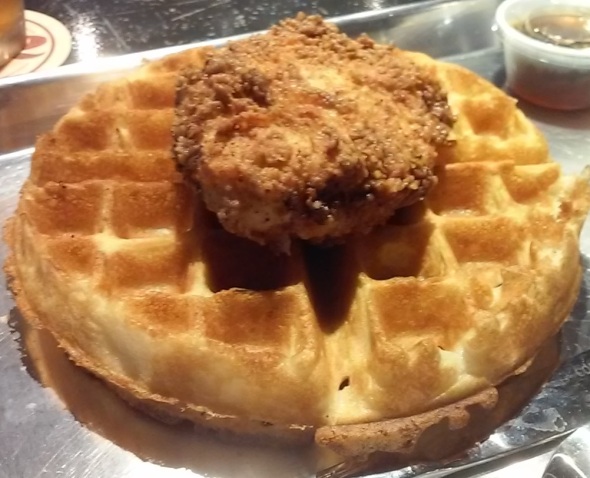 So I went in skeptical but left a believer. Looking forward to seeing this joint grow. They have exciting times ahead.

One last thing about their waffles. They use Flat 12 Cream Ale to mix the batter. Batter Up.

This is Indy Bacon Week. That is one week that NUVO invites restaurants to showcase all things bacon. Each joint comes up with their own bacon special for 5 bucks. Similar to Burger Week which happened in June. Both of these promotions also serve as a fundraiser for Second Helpings. This is an easy promotion since Hoosiers have such a “thing” for pork. We love all that is pig. From crisp bacon to deep-fried tenderloin as big as a truck tire or pulled pork on a toasted bun. Beef may be what’s for dinner in Texas but in Indiana it is pork.

Hoagies and Hops opened in 2015. A husband and wife  from Pennsylvania grew “nostalgic” for East coast hoagies and cheese steaks and decided to bring the food here. They get their bread from an Italian bakery in New Jersey and their deli meats from Dietz and Watson in Philadelphia.

The truly clever part of this opening is the location. It is right inside Flat 12 Bierwerks. Flat 12 has been around since 2010 and have consistently produce high quality beers. The only food that was provided was by the occasional food truck so if you wanted food with your beer you were out of luck. Now when you walk in you have the food counter on the left and the beer counter straight ahead. A genius idea. Hoagies and Hops opens at 11:30 Flat 12 noon. 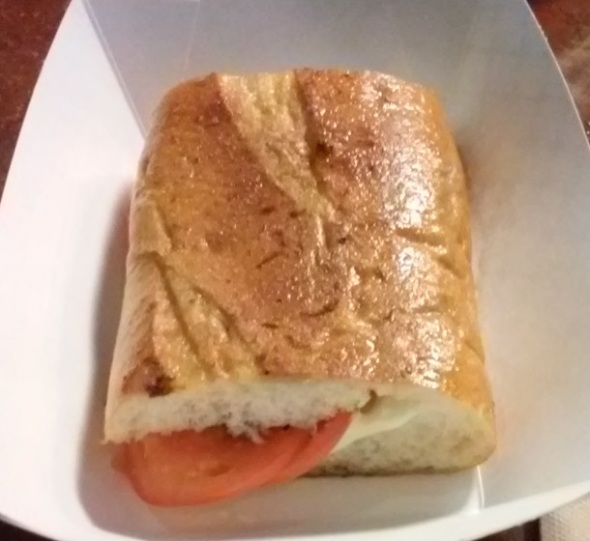 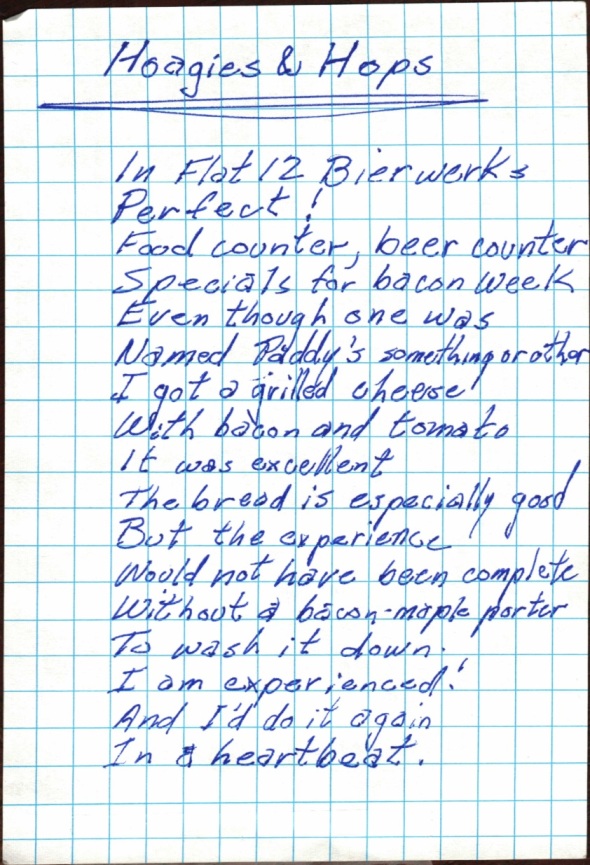 I opted for the Paddy’s something or other.

Now this was a very good sandwich. The meat was tender and flavorful and the sweetness of the relish helped balance out the mayo. I would have preferred more bacon; but more bacon is always the answer to just about any food question. I agree with Pat. The bread they use is top shelf and like Pat I would do it again. In a heart beat.