IS INDY READY FOR MEN IN SKIRTS? 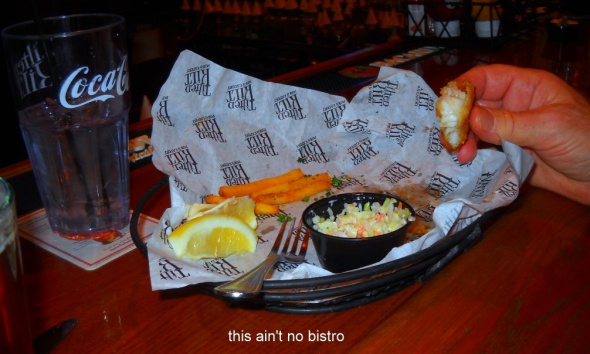 Well, we went to the Tilted Kilt for lunch. We knew it was a corporate Place, but Patrick wanted to try it out for quite some time.I know what you’re thinking, he wanted to check out the outfits the ladies wore, but that is only part of the reason. His wife, Fran, had tried the fish and chips while out-of-town and was quite complimentary about them, so Pat wanted to confirm they were as good as she said. And guess what, Paddy liked them.He thought the batter was delicious, and he especially liked the fact that the fish were big chunks, crisp on the outside and moist on the inside. The fries were fries. Nothing spectacular, but he did enjoy the coleslaw which is rare. It had no onions and was sweeter than most slaws;that might explain it.He thought the pricing was reasonable at $8.

I tried their “Irish stew“. You can get it as a bowl for about five dollars or a bigger portion for about$ 10 with garlic bread. They also offer a shepherd’s pie and I think it would be a good guess that they use the same stew for that as well.I know I would.In either event both portions came with delicious smashed tater on top. Actually, I was quite pleased with the stew. They make it, as well as the soups, in house.Since I still have a wee bit of a “dental challenge” I opted for the small version, and was pleasantly surprised to discover that the meat and veggies were all small diced. That,and the savory gravy just added to my overall enjoyment of the dish.I definitely will try it again, but I would probably go for the larger portion with bread.

As for liquid refreshment. They had the usual suspects of craft brews on draft in the $5 range and three dollar domestic bottle.They also have the obligatory über cheap PBR drafts. It’s nice to see one of the beers of the greatest generation is still being enjoyed by their kids and grandkids.

Now,about those uniforms.Neither Pat or I were too impressed by them.We thought the skirts were too Britney Spear-ish and the tops were way too tight. We couldn’t see how those ladies could be comfortable. We did discover, however, that the guys that work nights wear kilts as well. So ladies, that might be something you would want to check out.As for me if I want to see a dude in a kilt I’ll watch old British WWII movies on TCM.