Last week it was a small joint run by 3 women and this week it is a well know brewery that started in Speedway and now has expanded to the North side of Indy. The place is spacious and has a great patio for the warm weather. The Brewery Taproom in Speedway offered a small menu but also allowed folks to bring in carry out or order food from other places nearby. That is something a few breweries do. They may not offer food so they let customers bring in their own.

However here I don’t see them letting someone brown bag it. Their menu is predictable. That is not to say it is a bad menu or that the food is bad it is just that it is like so many “gastro pubs”. Some bar faves and others more trendy and hip.

We had another fellow with us named Ed. He has an appreciation of food and drink and it is always nice to hear his thoughts. He ordered a steak sandwich for $12. All of their handhelds come with fries or salad.

While we were waiting for Ed Pat ordered some Poutine, because he was hungry and that served as our appetizer. Sadly I didn’t take a picture until after we had started eating.

Normally Poutine is served with a gravy covering the fries and the cheese curds on top of that. Pat wanted the gravy on the side because of possible onion issues. There were a few really burned pieces of potato but those were my favorite bites. A good layer of gravy probably would have prevented that. Now for Ed’s steak sandwich.

Ed thought his steak sandwich was good. The meat tender with no gristle, and the fries were excellent. I agree with him on the fries. They were twice fried so they ended up crisp and hot. 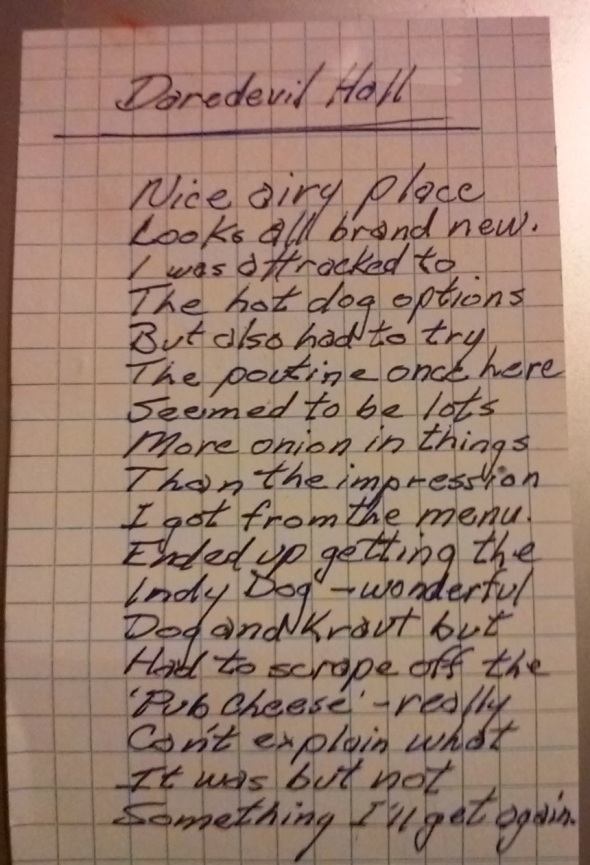 I opted for the Daredevil dog. That is an all beef sausage with pub cheese and a Colorado pork green chile. I wasn’t sure what this was but if it has green chiles in it then I am in. It turned out to be a nice portion of pork simmered in a green chile sauce. I would have been happy with a bowl full with a couple of flour tortillas. As it was I used it as a topping for my dog and a dipper for my fries. I ate most of it with a spoon. Overall it was a good plate. The dog was tasty and the pub cheese was a slightly spicy bridge for the green chile. I would get it again but sub a salad for the fries. Who can eat all the fries they give you?

So this joint has pretty good food and very good beer but the service left a bit to be desired. Our server was nice enough he just seemed a couple of steps behind. If he want’s to work in this industry he might want to develop a sense of urgency.

Right up front I wish to apologize to all the readers who come to this blog for information about locally owned restaurants. Mom and Pops. if you will. I thought this was a small local chain, like Mr. Tequilla. I was flat-footed wrong. I was enticed by the lure of a Hatch Green Chile Chicken enchilada. As it turns out the chain is far from small or local. But I had lunch there so….

Without getting in the weeds on Botany or Geography I must first explain Hatch Chiles. Hatch is a small town in Southern New Mexico,it is not a pepper. It is noted for the chiles it grows and has a yearly festival. The varieties they grow probably vary as the Universities are always experimenting on new and improved varieties. I am familiar with the Big Jim and a couple of others I can’t recall. In either event these chiles are Extremely popular in New Mexico;or at least they were when I lived out there. And they are addictive. So although I have been clean for 20 years I thought I needed a taste.

Their salsa had a bit of zip but it was thin and had cumin in it. To me you don’t add cumin to salsa. And why do people cut their tortillas into quarters to fry for chips? They are too big.

The margarita was pretty good. It was a Grande for $6.99. It was pretty nice sitting outside with music in the background and a cocktail in hand.

Now for the main dish. My Hatch Green Chile Chicken enchilada. Were the chiles truly Hatch. Nope. Hatch is too small of an area to produce a whole bunch of peppers. Were they authentic New Mex peppers? Possibly. I recall that there is/was a brand of canned green chiles called Hatch. They were from Deming, a small town in New Mex. But pedigrees aside how did they taste? The sauce looked familiar and the flavor was a bit reminiscent, however they were a tad stingy on amount they used to covered my enchiladas. The chicken itself was okay. A decent amount but the flavor wasn’t anything to write home about. As for the beans. So so, and the rice;who thought tossing a few kernels of corn in was a good idea? Overall There are a bunch of truly local joints that do it better. I just had to chase a memory I guess. And I was satisfied.