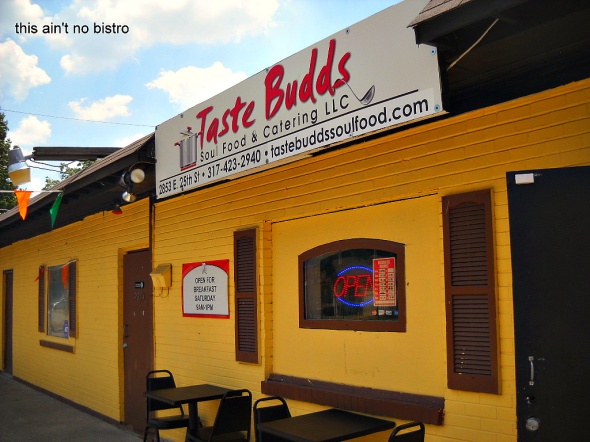 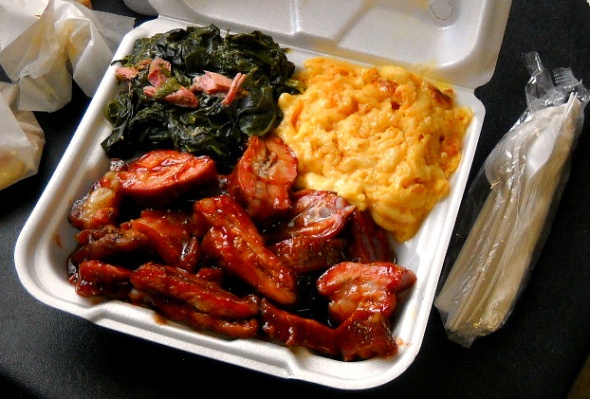 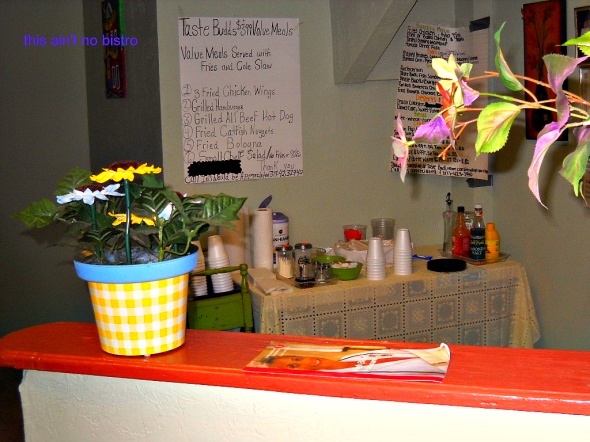 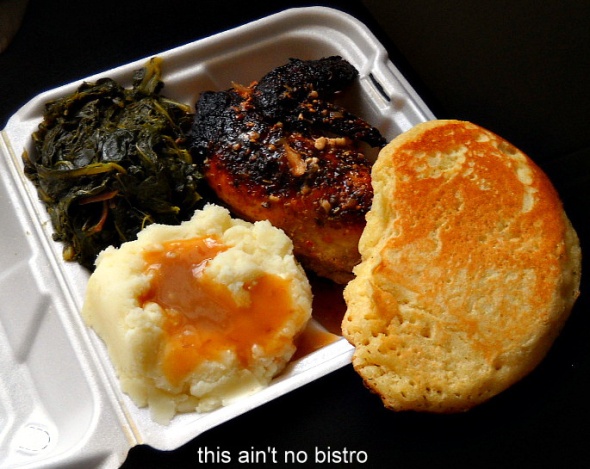 Today is a beautiful Saturday; and, you know you have had a long, hot and hard week. So I think you and the whole family should hop into the car; jump on your bikes or pop into an IndyGo; and go to 25th and Oxford streets and have lunch. Taste Budds is a place you must go to if you like good cooking, think you like good cooking or like a lot of people don’t even know what good cooking is. Depending on your age a meal at Taste Budds is the kind of food your mom or grandma would’ve made for you when you were young.I don’t care who you are or what you prefer to eat; I think you’ll find something to like there.They offer small plates for $8.18, tax included and large plates, for $11.99. Either size comes with two sides and choice of bread; one of which is hot-water cornbread; or some would call it Johnnie cake. They also offer $3.99 lunch specials,that are served with fries and coleslaw.

Normally I don’t order, rib tips ; when I go out. The quality as well as the technique is hit and miss. This time,I asked the young man where they got their meat and how they were cooked. That might sound extreme, but believe me, I’ve been burned before by fatty and/or bony tips. I ordered the small plate of tips with collard greens, mac & cheese, and of course cornbread. When I opened the clamshell I was astounded by the big pile of beautiful pieces of pig inside. The pieces were small enough you could pop one into your mouth and chew around the occasional small bone before discreetly depositing it in a napkin. At the same time the pieces were tender enough to cut with a plastic fork.You could taste the slight smokiness from the grill and the sauce did its job properly;enhancing the flavor of the pork not overpowering it. As any good backup singer should.The greens were as good as you would expect from a kitchen this good. They used smoked turkey to season them;a pleasant alternative to the more usual smoked ham hock. As for the mac & cheese all I can say is, it is hands down,the best I’ve eaten in any restaurant I have been to.

Pat opted for a small plate as well.He chose herb roast chicken, mashed potatoes, greens and cornbread. He enjoyed the greens as much as I did, this being the first time he has had them with smoked turkey. And if the speed at which he ate the mashed potatoes and gravy, he must have liked those too. At the risk of sounding gushy the chicken was beautiful. It was a lemon and herb crusted and roasted airline breast. That is to say it was a breast half with a wing attached. The skin was golden brown and the flesh inside moist and tender. Now that I was able to try since, Pat couldn’t finish his meal either.It always amazes me how something so simple could be so delicious and so hard to do by so many folks.The only thing that Pat and I could not agree on was a cornbread. He thought it was the best we have had and I thought it was a tie between , theirs and Dee’s and Pa and Ma’s.

Since the number five bus stops right in front of the place I’m going back, soon. I have to try their liver and onions. To date, every place I’ve gone to always overcook the meat and undercook the onion’s.So folks this place is the real deal.So to all those folks who “whine” about how the chains are taking over; get off your back sides and get to Brightwood and support this great little independent café. To paraphrase myself in my post about Kountry Kitchen: These guys have the skill of a master carpenter and the soul of a church choir.

Hey Rick if you and Jim go;try the meat loaf and let me know how it is.