People that go to bars realize they can be placed into 2 basic categories. Bars that make you nervous. Those bars you never even think of eating at. So you finish your drink. leave and probably never return. The second category is bars that make you feel more relaxed. Places you wouldn’t mind having a second beverage or even order a nosh.

Well I think G.G’s falls into the second category. We stopped there for a couple of beers last week and liked the whole scene. The menu has your basic bar fry food and it also has a good selection of not so basic pub grub. 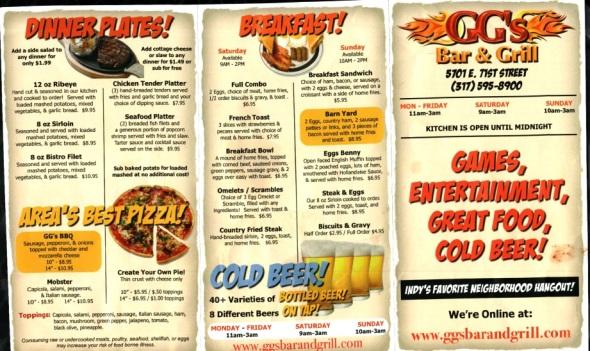 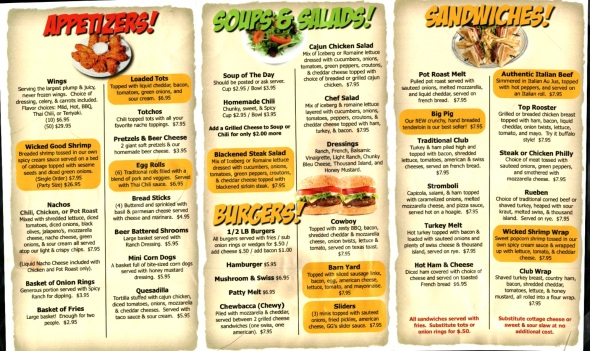 I really had my eye set on the Ribeye steak. But at the last-minute I thought it might be too much food for lunch. As it turned out what I did eat was just as much.

One of the specials was a slice of New York pizza for $1.99. We decided to have that as an appetizer. They make their own crust and sauce so I wanted to try it anyway. 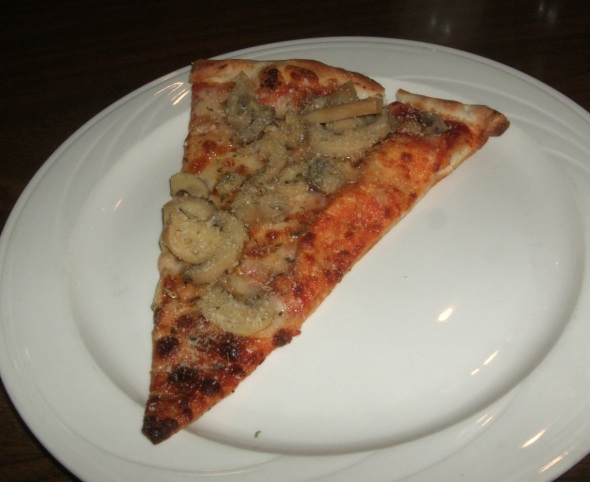 This is one half of the slice. My guess is it was 1/4 of a 14 inch pie. I think they only offer thin crust. The crust was pretty good, it had a nice flavor and decent mouth feel. I would have liked it a bit crisper though. As for the sauce it too had a pretty good flavor it just needed a little more pizzazz. The addition of salt would be a good start,in my opinion.

As for Pat he had planned on ordering the filet. But the allure of the big pig was too much for him. 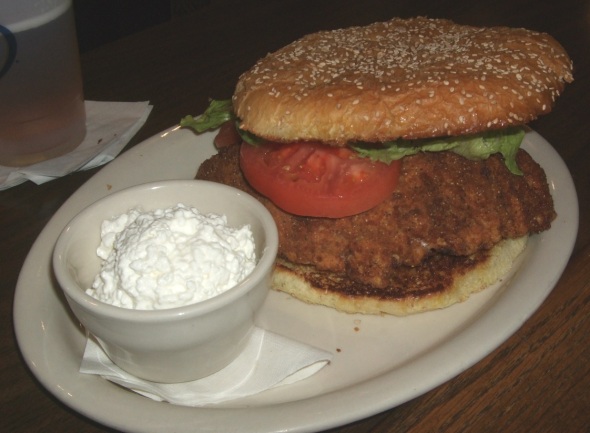 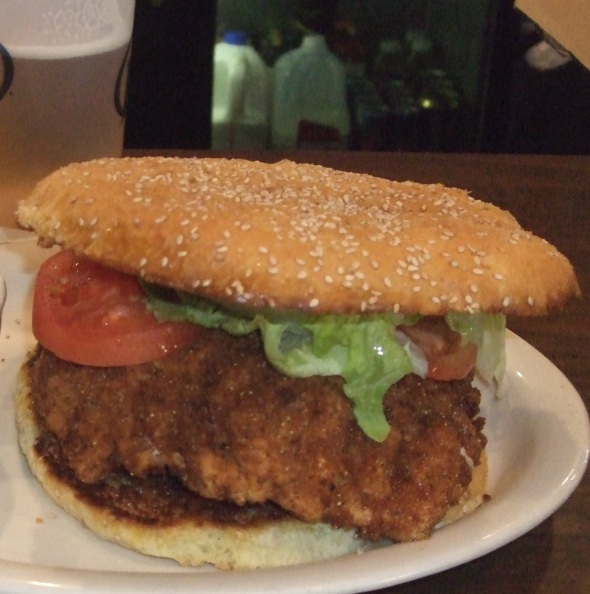 They offered 3 lunch specials one of which was chili with grilled cheese sandwich for $ 5.95. Now that is as Hoosier as you can get.

The sandwich was what you would imagine. Buttered Texas toast and American cheese. Something I would hardly ever order out but it was a cold day and I wanted chili. What is it about grilled cheese sandwiches and soup that sound so compelling?

As for the chili it was a very good example of Indiana style chili, nothing fancy just tasty and filling. Chili is one of the many cooking things that intrigue me. All the different ways people prepare it fascinates me.

This chili was mostly ground beef with the main seasoning being chile powder. A mix of chile peppers and cumin. It had kidney beans and diced green pepper, definitely a Hoosier and “near South” thing. But the one thing that brought back the memories was the sweetness and spiciness of the soup. A job well done. 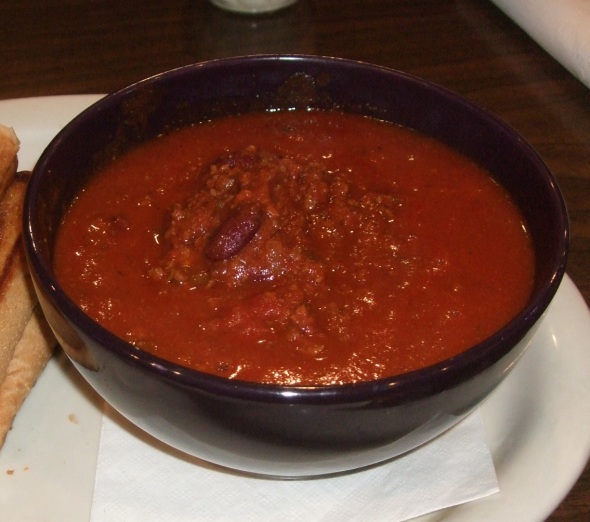 So once again we introduce to you a bar. A bar that has some very good food, very good prices and a very good bar tender/server. I believe her name is Nicole. Remember its name. G.G’s Bar & Grill.

If you are an aficionado of neighborhood bars, you should definitely put this on your list.Pat and I have stopped in there a few times for beers but this is the first time we ate. We always enjoyed ourselves. Nice place,friendly crowd. Especially as it gets closer to race time. After all the 500 Track is just up the street. However their beer selection is limited to draft Silver Bullet and domestic bottles. But the prices are right. 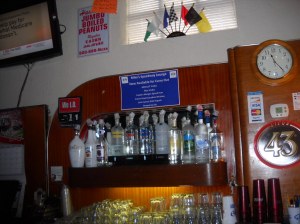 They serve breakfast all day and that is a plus. The lunch/dinner menu is pretty typical bar although they do have a few atypical items. For example they offer both home-made chili and beef stew year round. They also have fried chicken livers. I love chicken livers but I’m not supposed to eat them. You know fat, cholesterol and all that stuff. So I tried their signature Spanish Burger. That is an 8 ounce patty of seasoned beef and onion that is baked, meatloaf style. It is then placed on a toasted bun and smothered with their Spanish Sauce. Which is a tomato based sauce with green pepper and redolent with cayenne pepper. The burger itself was pretty good. Nicely made and nicely textured. It was difficult to taste the seasoning of the meat due to the spiciness of the sauce. If you like a high level of heat then you will probably like this. Personally my taste buds have gotten pretty Gringo-fied;since my return to Indiana. Also I think it could use some different types of chile pepper in addition to cayenne. All in all it was a pretty good sandwich for 6 bucks. That’s with choice of fries or a bag of chips. 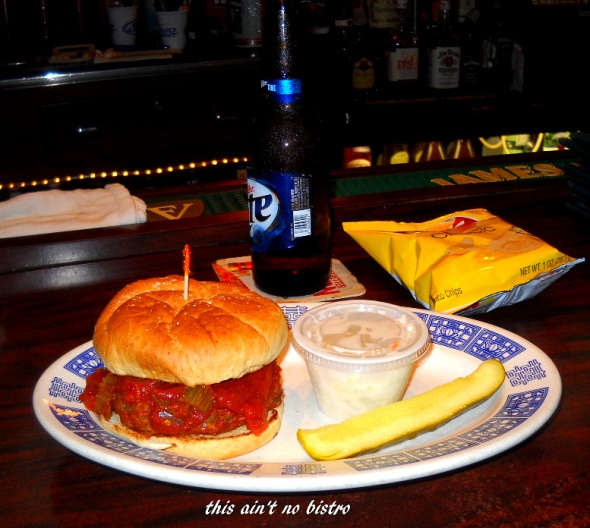 Pat ordered a grilled tenderloin. Like a lot of joints they beat out their own with a mallet. He found it to be tender and tasty. Like a lot of tenderloin in a lot of places. He did particularly enjoy the made in-house made cole slaw. It had no onion. Patrick’s kryptonite. It too was $6,with choice. 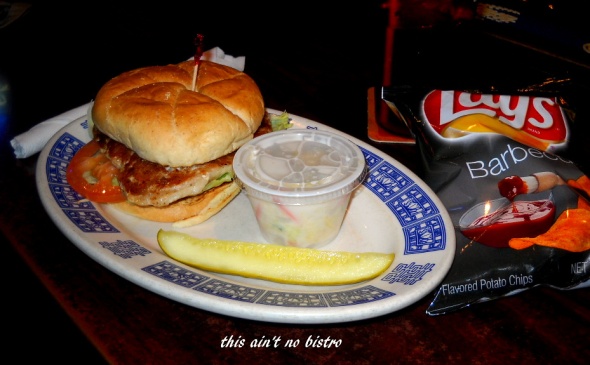 So if you are out and about the Westside, especially during the month of May. You really should stop in at Mike’s for a beer and a bite.

On 54th St., just west of the Monon trail sits a rather common looking building that was a gas station in a previous life. Since the place was called Locally Grown Gardens, I naturally assumed it was nothing more than a “farmer’s market,”. And frankly, I haven’t had a lot of success with farmers markets in Indianapolis. Obviously, I’ve been looking at the wrong ones. A young fellow named Christopher N.at Putitinyourface.net told me the full story or least  his review did.It seems that Locally Grown Gardens isn’t just a produce stand, and a good one at that, but also offers a large array of baked goods and lunch and dinner.

Their menu is limited, three entrées and two sides and a whole bunch of pies. They smoke their own pork out back and offer it as an open-faced sandwich for 9 1/2 Bucks. They also offer two salmon dishes at $12.85 each. One with citrus vinaigrette and mixed greens and the other with, I believe with a Rosemary mustard vinaigrette and ginger slaw.Pat ordered the pork, when it came out our jaws dropped. It wasn’t just a big mound of shredded pork sitting on a piece of Texas toast. It was two colossal hunks of smoked pig on a thick slice of the chefs homemade bread and a puddle of rich, reddish-brown sauce on the side.The pork was perfectly smoked and properly moist. The sauce was bold and I could see how too much could overpower the pork. However, it was perfect used as a dip for the meat.My salmon was equally impressive. All their food is served on large white rectangular plates, which enhances the visual spectacle. The portion was at least 8 ounces and was cooked just to the point of inner opaqueness and no more. The perfect mid rare. The mixed greens were thoughtfully selected and presented, with large enough leaves so that you could see what they were,not like these all too common salads that look as if they’ve been run through a blender.The vinaigrette was sweet and acidic enough  to be a proper unifier of the greens and the fish. It was also the perfect foil for the richness of the salmon.

But wait, as a great as the lunch was the best is yet to come ,the desert. A big slice of wait for it… Wait for it. Sugar cream pie. That’s right the state pie of Indiana. To say it was delicious is like saying Padma Lakshimi is cute.The crust was tender and flaky and the filling was more reminiscent of a crème Brulé than a pie.Seriously words can only go so far you really must try this pie. At $3.50 per slice and $10.50 for a whole pie, you can’t go wrong.

You should be forewarned that seating is limited. There is a large table with benches in the library room, a picnic table and a small  café table out under the trees., But that shouldn’t deter you the great food and the other neat stuff they have makes it worth the trip.