Well another new joint has opened in Indy. This one is unique in that the owner/operators Chris and Ally Benedyke are from Indianapolis originally and have just returned from Milwaukee where they owned a similar place by the same name. The new place, like the old one features specialty sandwiches and small plates using local sources. Since they plan on changing the menu weekly they are relying on Facebook and not a web site. Since that was the case I felt compelled to do a bit of reconnaissance, or reconn-oink-ering if you prefer. You know since they do a lot with pig. Well in either event I went in on Tuesday morning for breakfast. 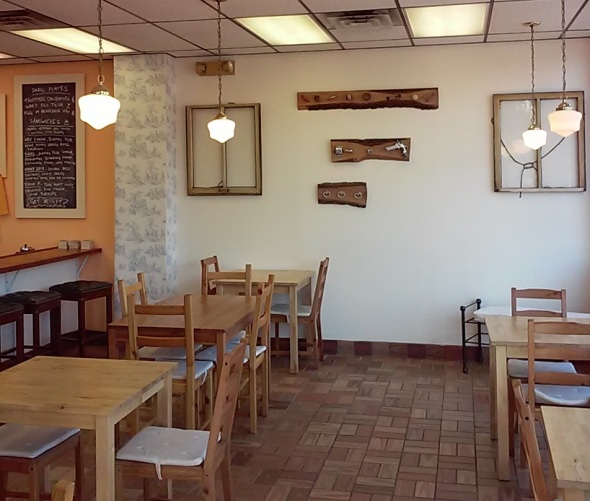 It is a small place with a counter and a few tables, so it is rather cozy. I was told it used to be a Subway, if that is the case the size makes sense. 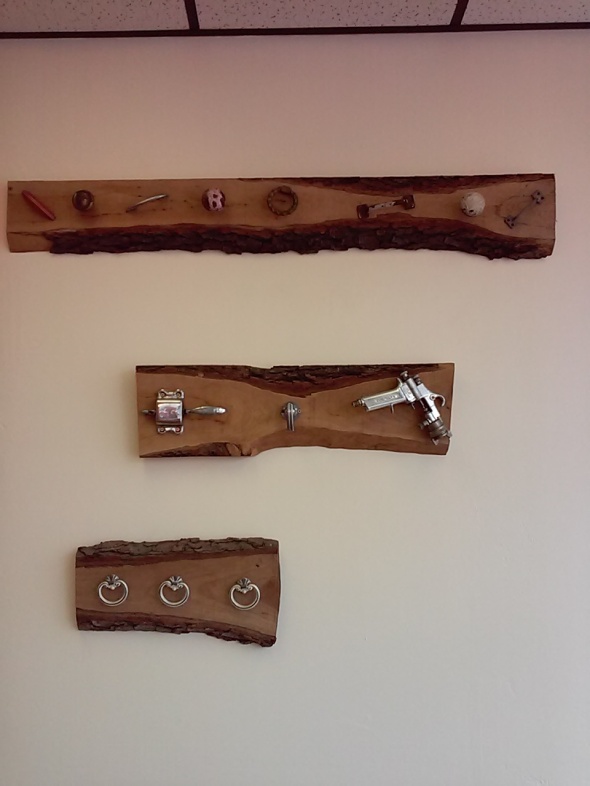 The one item I was most intrigued with was their version of bacon,egg and toast for $7. It was a big slice of pork belly with a jellied egg yolk and toasted french style bread. It was probably one of the most unusual things I have put in my mouth but also one of the tastiest. The pork belly;or bacon is self-explanatory. Salty and unctuous ( I know I use that word a lot but sometimes it just fits) with just the right amount of tooth. The egg was odd in all the right ways. A poached egg yolk encapsulated in an aspic derived from the preparation of hog feet or trotters. Since it was cold it was a shock to my tongue after puncturing the jelly and seeing the yolk flow out but it was as good a mopping egg as any warm poached one. And you had the bonus of pig jelly. Any talk of egg yolk mopping has to lead to bread and their choice of Amelia’s was good but their treatment of it was better. The bread is toasted then spread with a mixture of unsalted butter, apple butter and a hint of seranno chile. It was delicious. The whole plate was a hit.

I also tried some of their miso and brown butter ice cream for $4. A browned butter is the start of a caramel so if you add that to sugar and cream you get a true decadent caramel. You freeze it you get this. Again a good job. However I didn’t taste much from the miso. But the earthiness of a brown miso can mimick an aspect of caramal I suppose. Regardless it was a great ice cream I would not hesitate to try again.

I also tried a sweet roll, a Miso- Ovaltine Sweet Roll to be precise, and in full disclosure Ally gave it to me. I guess she thought I wasn’t getting enough to eat. It was an excellent roll and sells for 4 bucks 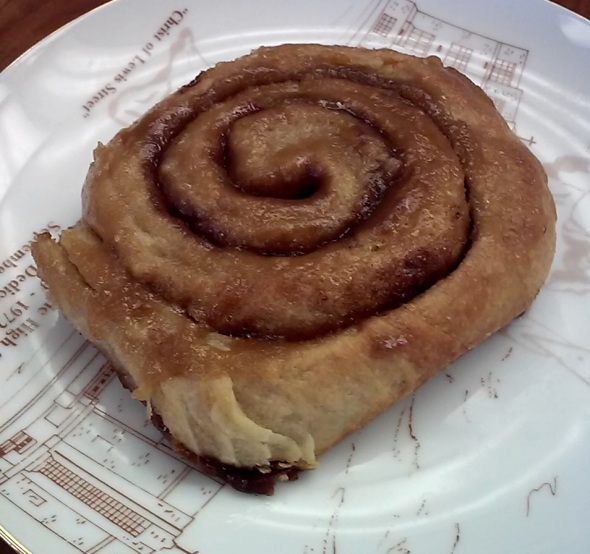 So this brings us to Wednesday, the day Pat and I have decided for lunch. I had told Pat about this place and how I was going to check it out beforehand,and he groaned at my oink joke as I am sure most people would. Actually I was surprised that he was willing to give it a try,possibly because it was my turn to buy.

I was pretty sure what I wanted to try from the beginning the Tesa, $7 and the Trotter Croquettes for $6.

Tesa is similar to Prosciutto in that it is slow cured and is eaten without further cooking. Where it differs is the part of the pig it comes from. Prosciutto is from the hind or ham area Tesa is from the belly.

I received a big old plate of piggy goodness with a bit of cooked beet,sour turnip and jalapeno as accompaniment as well as a bunch of toast. I also got another one of Chris’s eggs as a bonus. Once again everything fit like a glove. Actually I found this more interesting than prosciutto. With the ratio between fat and lean as it is on pork belly it was like getting Lardo as a bonus.

I also had to try the Trotter. Before you freak remember that there is some good meat in a pig’s foot. It just takes a while to get to it,but you do get the added value of the gelatin. Like everything else these croquettes were very good. A crisp exterior and a moist and meaty interior. 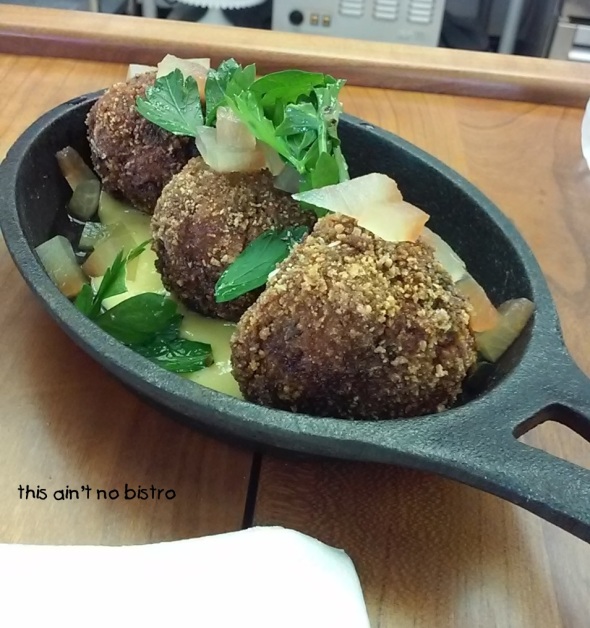 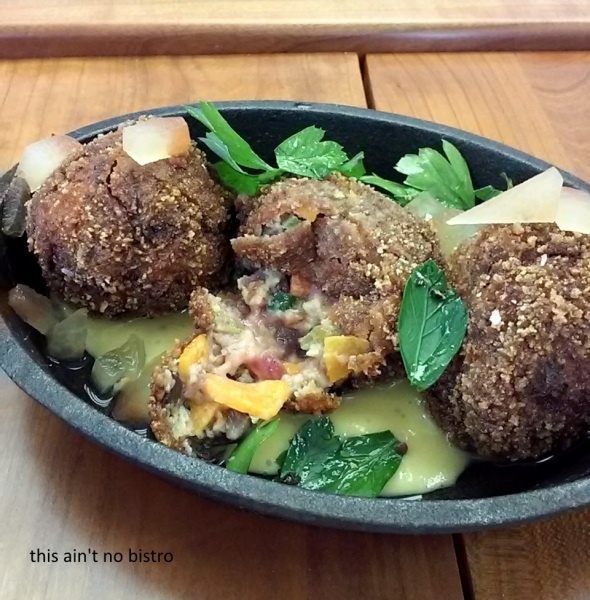 With Pat it wasn’t so easy. I think he just agreed to go just to humor me. 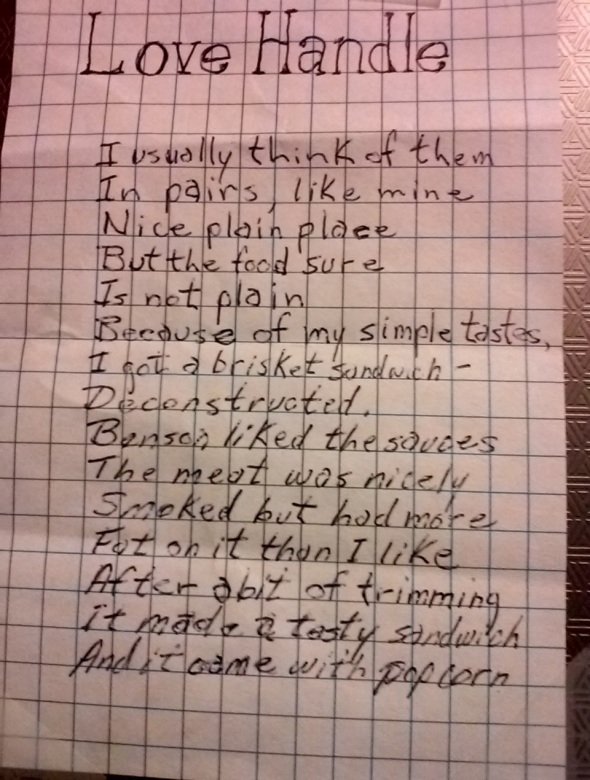 I was too busy feeding my face so I forgot to take any shots of Pat’s food until the very end. 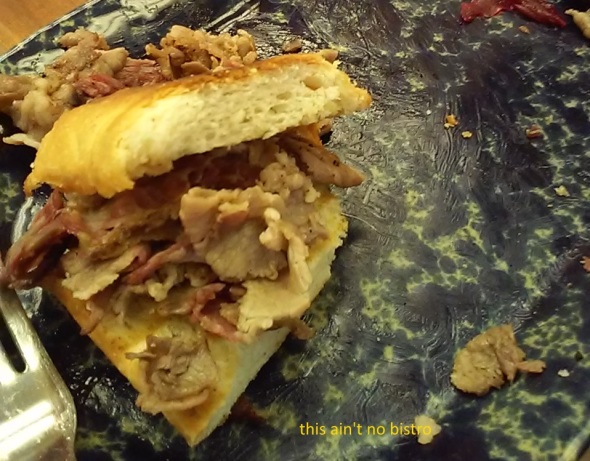 They toss the corn in bacon fat and then sprinkle it with Nutritional Yeast, the result is unique and tasty.

The sauces Pat referenced was a soy type reduction and a soda pop mustard both made in-house. They both went well with the Tesa and the trotters,especially the mustard. That was made with Tamarind flavor Jarrito’s soda pop and minimally ground. A very interesting taste.

One last thing. We shared a slice of Lavender and coconut cream tart.

Great crust,nice and creamy with good coconut flavor. As for the lavender it wasn’t as pronounced as I thought it would be. Good pie regardless. So as you can see I really enjoyed this place and its food. Pat; not so much. But he was a trooper for going there with me. In either event I think it a place worth exploring. 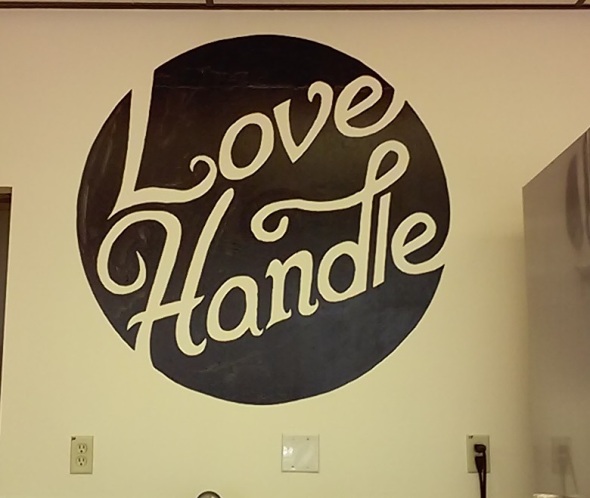 Well look at us. Two weeks in a row we’ve gone to a couple of the “fancier” joints in town. Bluebeard isn’t really fancy they just have a fancy sounding menu. Trust me Pat and I wouldn’t go to a truly fancy schmancy place; even at lunch. We are like a pair of brown shoes in a tuxedo world. To me Bluebeard is a visual delight. Exposed beams and brick work; mis matched bar stools and dining tables. Not enough to be tedious just enough to be hip. Not in the angst driven Sinking Ship way more in an urbane way. But what the hell do I know? I’m just one brown Florsheim.

The menu is geared for foodies. An eclectic array meant to share. Of course not all the plates are sufficient size to share. And you have to be careful. You can run up a sizable lunch tab without too much trouble. They vary the menu daily which can be a bummer. When we found out they make their own lardo we ordered a small bread appetizer. Lardo is like the name implies. Pig fat that has been cured. It takes 30 to 60 days to process properly. That day lardo was something they varied; substituting mortadella spread. It was nice, but no whipped pork fat. But the spreads all took a back seat to the BREAD. They make their own bread on premise and all of their varieties rock. Pat didn’t want to play what’s that food. I don’t blame him. It’s tough enough to find food with no onion of any kind. So he opted for a sandwich. 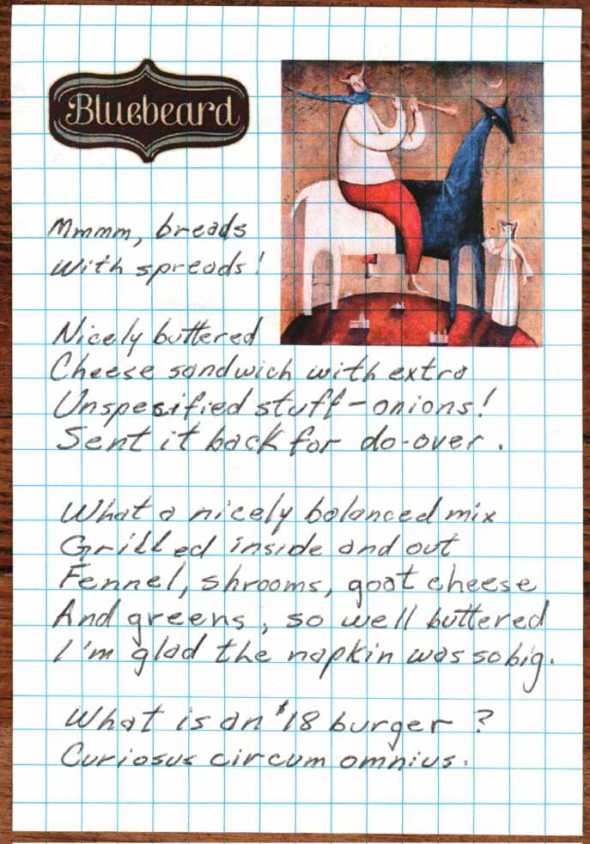 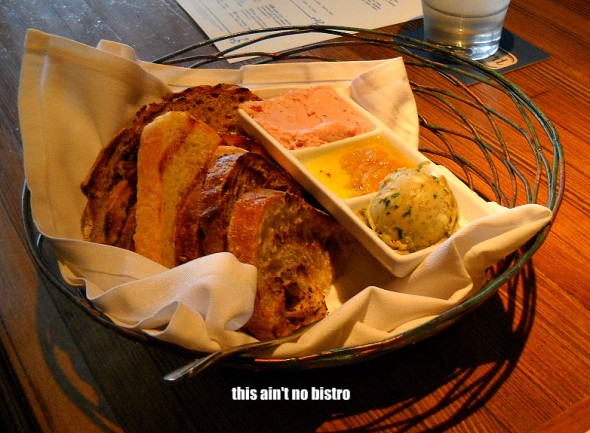 Much to my surprise they get their oysters and octopus in fresh. Since I haven’t had octopus since the last time I was in Florida that is what I started with. The presentation was rather disappointing. The had toast points on top, obscuring the view. The octopus was tender and very nicely done. The bagna cauda was spot on. Full of olive flavor; since they opted for olive rather than anchovy, I thought it fit the octopus nicely. I did find the fennel flavor lacking. Which is odd. Usually when you low roast veggies in oil the flavor is enhanced.

After the octopus I tried a couple of oysters. Admittedly I am hardly an expert on oyster varieties but this particular sort was on the small side. Small but delicious. And the mignonette was a perfect match. The salty,sweet of the oyster and the slight shudder of the vinegar. But in my gluttonous eagerness I forgot to take a picture of the oysters.

But I wasn’t through yet. Remember my cautionary remark about being careful. I decided I needed a salad. And I figured that if I picked the right one I could forego desert. So I picked the one with mixed greens and asian pear and avocado. Damn if I don’t  think that it could be the perfect salad. From the sweetness of the pear to the buttery creaminess of the avocado and with the bitterness of the greens, crunch of the sunflower kernels and the brightness of the citrus in between this was definitely my favorite.

Are we through yet? Oh No. Our über pleasant and efficient bartender, Cali, thought we should try their signature buttermilk bread pudding. So she brought us one to share. Just look at it and think of white chocolate sauce, and coco nibs. So on that note we say good-bye. 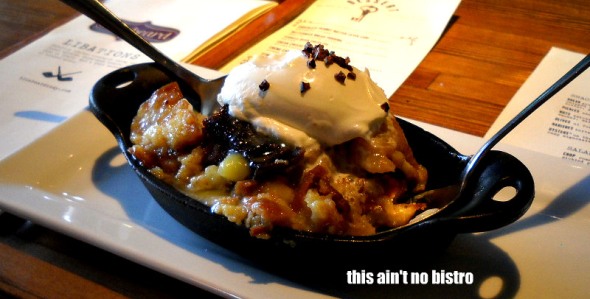 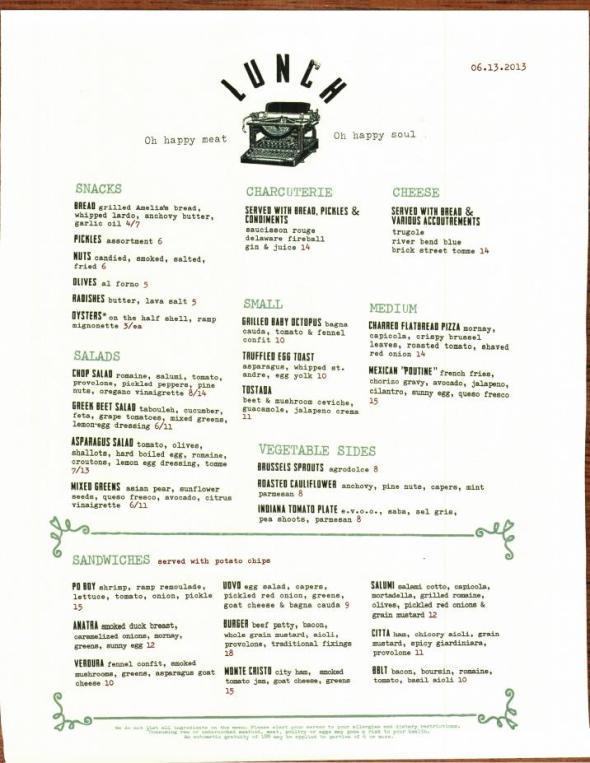