I have been wanting to try this place for a while. One of those times when Pat was gone I went there but they were closed for a remodel. Pat is hardly ever interested in eating something different but some times he surprises me.

Pupusas are thick tortillas stuffed with various other food items. This place offers several different varieties along with tamales and tacos.

Pat ordered a steak and cheese and a chicken and cheese pupusa. All of the pupusas come with a cup of pickled cabbage. We also had a basket of chips with different salsas.

I ordered 2 pupusas, a pork and cheese and a loroco and cheese. I also got a tongue taco and a chicken tamale. More food than I was able to eat so I was able to take them home for an evening snack.

My pupusas were excellent. Large and hearty. Loroco is an herb used in some parts of Latin America. The pupusa I ordered was made with a cheese with the bud chopped up in it. So the actual flavor of the herb was minimal regardless they were very tasty and went really well with the slaw.

That large dolma looking object is my tamale. They use banana leaves instead of corn husks. This was the biggest tamale I think I have ever had. I probably should have unwrapped it to photograph but I was more concentrated on eating. It was pretty good. It did have a thicker “shell” than some tamales I have had but it wasn’t a deal breaker to me. As for the taco it was ideal for me. Two soft corn torts with a lot of meat and topped only with cilantro and onion.

I really liked this joint. It is small but nicely appointed and the food is very good and more than reasonably priced. The total cost for our feast was $18, and for a Bonus Pat tried something he never thought he would try.

Today we traveled to the west side for some El Salvadoran treats. Pat discovered this place more by happen stance than anything else. His wife, Fran, brought him a tamale she had picked up at the City Market from the 3 in 1 Restaurant,it had a stand at the Farmer’s Winter Market. Sweet corn, pig and no onions. Love at first bite for Pat.

We don’t go to the west side that often so I was curious to see what sights I have been missing. Besides. I am a freak for tamales. Also I was quite curious about the name. At each table was a laminated sheet explaining the origin of their name. I thought it was a touching story so I am posting a copy. 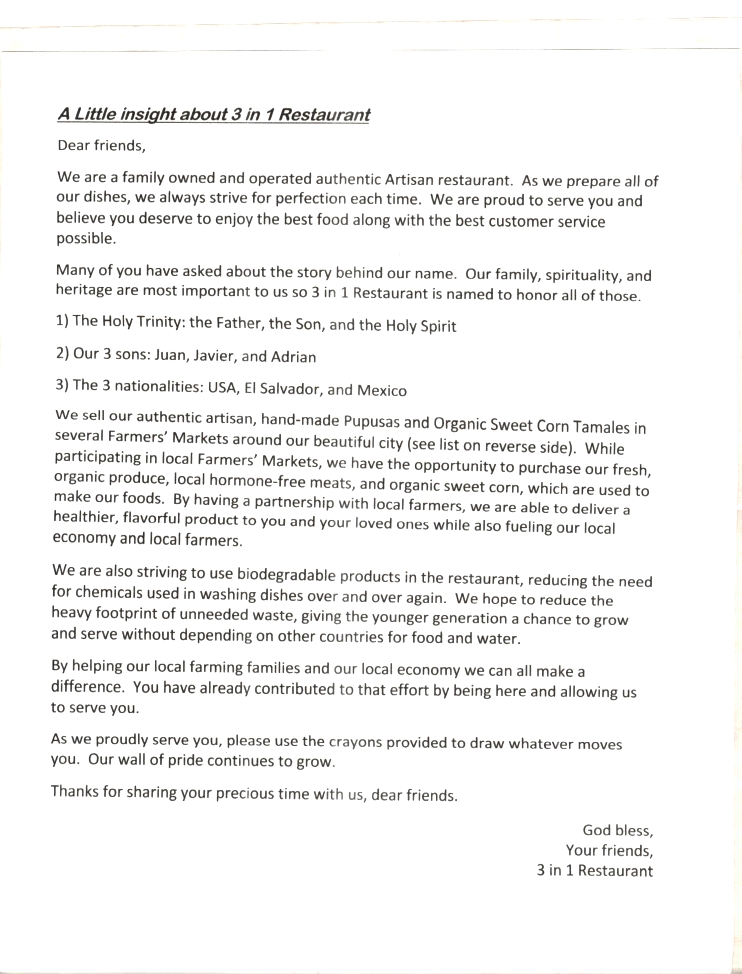 I wish to apologize in advance for my pictures. Normally I make up for my lack of photographic skill by taking multiple shots, and picking the best to publish. However my batteries were dying so I couldn’t.

As you can see the prices are more than reasonable. They also have a special on Pupusas, 2 for $5. A pupusa is a thick corn cake stuffed with various tasty things. Chicken or pork and cheese or loroco and cheese. Loroco is an edible flower. An item I have heard of but never tried. Both pupusa and loroco are common in El Salvador. And the closest I have been to El Salvador is Costa Rica .

We ordered Deep Fried Corn Balls and a Riqua to share. A riqua is like a unstuffed pupusa.

These bad boys were delicious. Look like hush puppies don’t they? That’s what they taste like, but sweeter due to the corn used. At the owner’s suggestion I added powdered sugar to one and it was so reminiscent of a State Fair elephant ear my mouth thought it was August.  And if you added the house made tomatillo sauce the whole flavor profile changed. Instead of enhancing the sweet corn it complemented it with a note of sour and a touch of heat. I thought the tomatillo sauce was outstanding. Definitely one of the best I have had. Including my own.

This is one-fourth of a riqua. We did it again. Eating before snapping. It too was tasty. Like a Johnny cake with extra sweetness.

Pat ordered a pork tamale and a chicken and cheese pupusa. Since I ordered a locoro pupusa we shared.

As you can see their presentation is very utilitarian. In addition to the loroco pupusa, I got a plain tamale and a steak taco. They don’t add the garden to their tacos. For that they have a small cold table for the customer to add their own.

The tamale was softer and sweeter than I am used to but it was good none the less. In the future I will go with pork. I know it wouldn’t be “authentic” but I think a little bacon with the pork would be a nice little addition. The loroco had a nice flavor but I am unable to describe it. The end taste was familiar  but I can’t quite put my tongue on what it is. I know that’s not much help but that’s the best I can do.The steak on my taco was tender, moist and abundant. I think the one factor that made this taco outstanding was the choices in the condiment table. 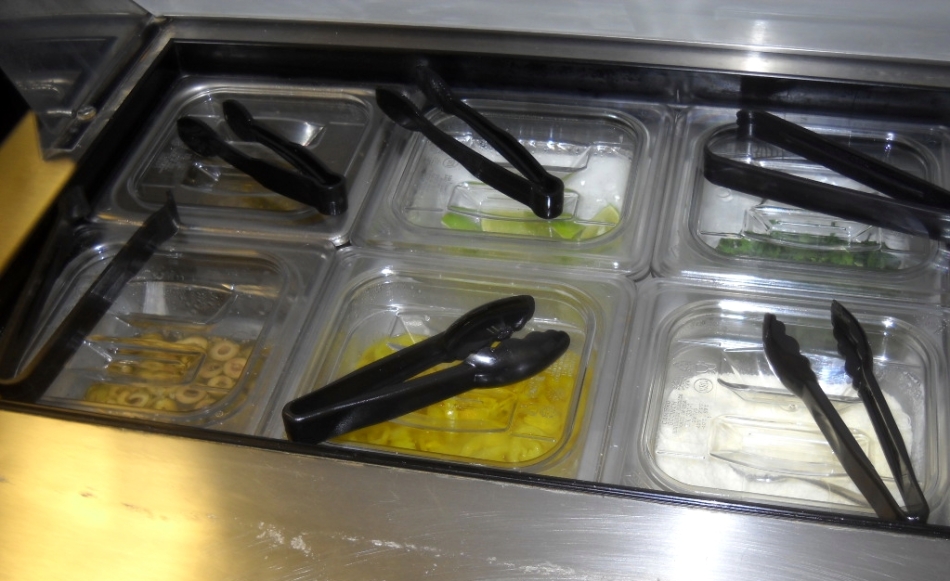 In addition to the usual taco toppings they offered green olives, banana peppers, cojita cheese and a crazy slaw. Just shredded cabbage, carrot and lemon juice. Simple and delicious. And the addition of green olives to a taco is brilliant. I can not believe I have not tried it before now.

So if you like good eats with a Latin flair then you should get to 3 in 1 Restaurant. The family that owns the joint is earnest and committed to good food. Also I noticed on a sign as we were leaving you can get the Fried Corn Balls with bacon and cheese for about a buck more. Fried corn, bacon AND cheese. The 3 main food groups.