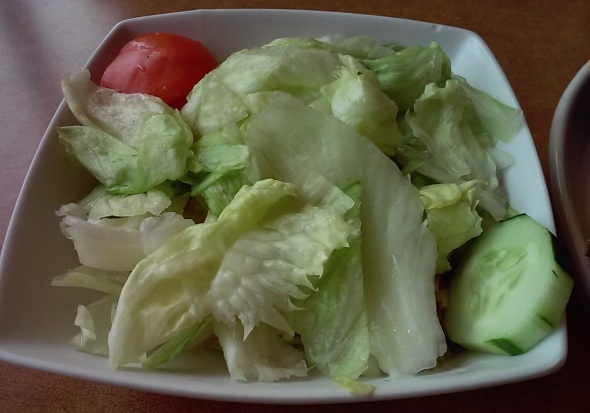 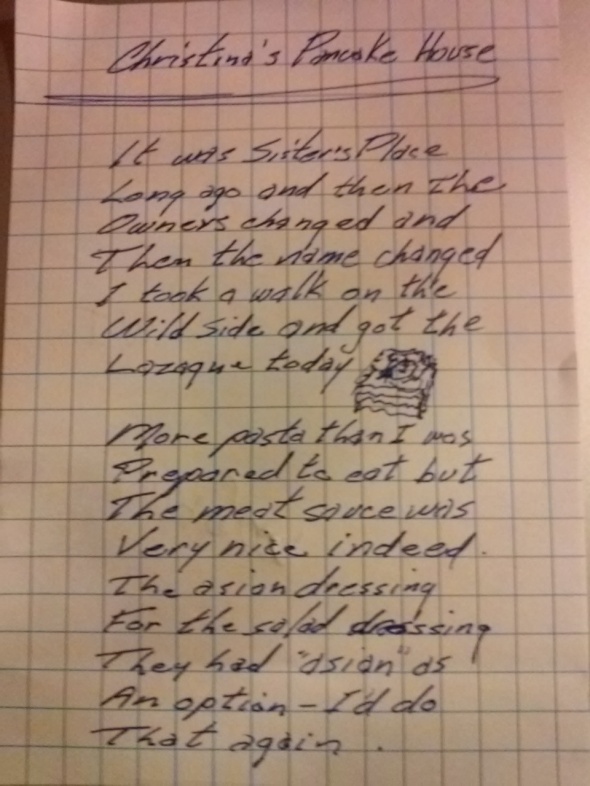 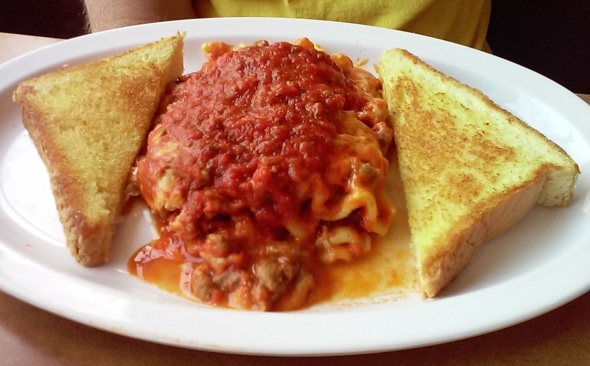 I am starting off my lunch review with a picture of the best part of my lunch. Pie 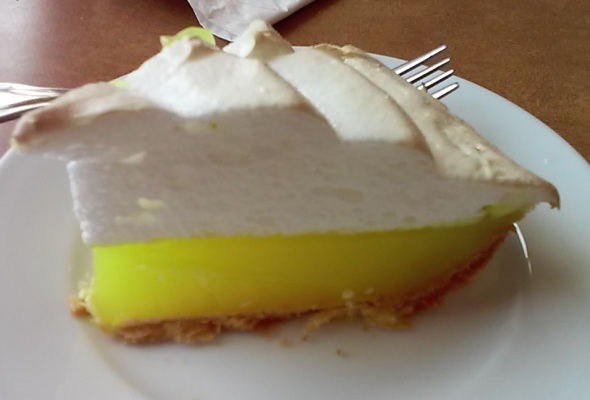 A delicious slice of Lemon Meringue pie for $3.50. They buy the pies from Hoosier Mama Pie Company in Chicago. The same outfit that the previous owner use. It was an excellent piece of pie. I can’t say the same for the rest of my lunch. My meat loaf dinner was $9.45 and came with soup or salad, roll and VOD as well as a plate of meat loaf and “lumpy mashed potatoes” all smother with gravy. One of the soup options was Chicken Gumbo. Well it was not what I expected. 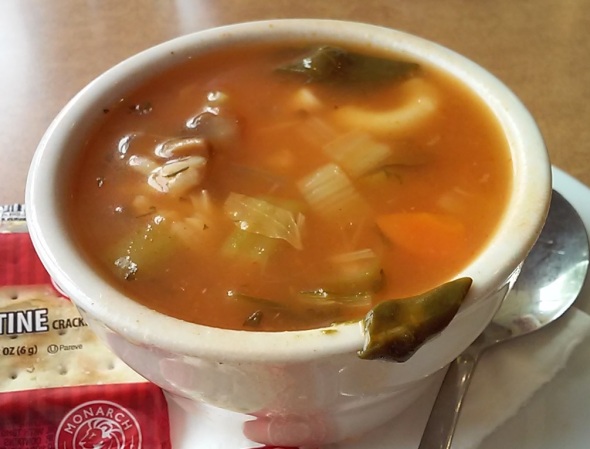 I think you could call this many things but Gumbo isn’t one of them. I have never seen a Gumbo that didn’t have the Trinity in it. Nor have I ever had a Gumbo with macaroni added to it. Overall it had the flavor of a Campbell’s Soup. Would not do it again. 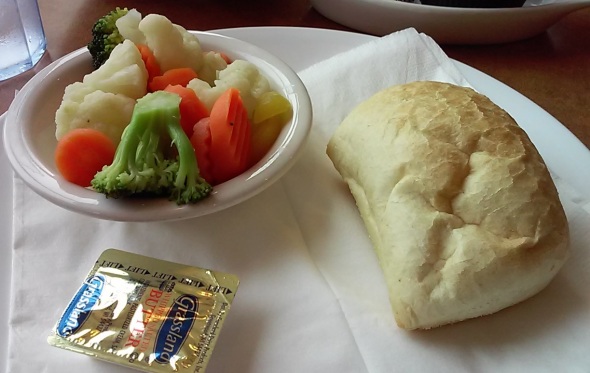 The roll was interesting. It had a slight Ciabatta chew to it which I thought was nice and they use real butter which is always good. As for the veggie. Why bother. It was straight from a bag of frozen vegetables and no attempt was made to even make them even interesting. 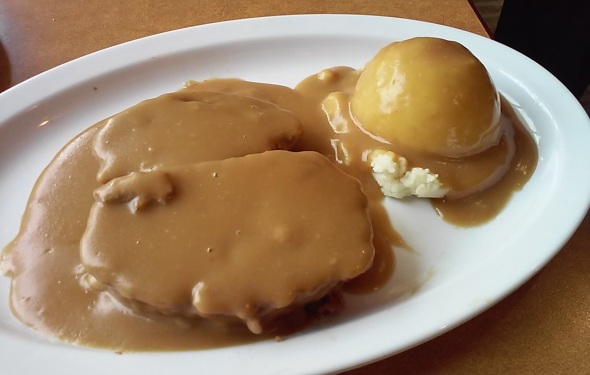 Now we come to the center of the plate. The meat loaf. It wasn’t bad just not really good. I would guess that it wasn’t made in-house. I based that on the compaction and the fine grind of the meat. If I am wrong then they can redeem it by using seasoning in a more bold fashion. Since they refer to their potatoes as lumpy I would guess they are made here from real potatoes. They are pretty lumpy and pretty good. The gravy was more than likely from a mix but had a decent flavor to it. I think if you want a more “scratch made ” experience you should try breakfast, which they sell all day. It is a really large menu so you could probably find something you like. 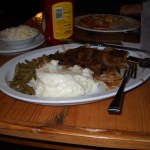 I was really looking forward to our excursion to the Patriots Table. The menu seemed extensive and the reviews were rather diverse. They almost seemed to break on age groups. Older folks liked it , younger folks did not. One fellow even decided not to go in when he saw the condition of the parking lot (it had been re-patched many times). I guess he didn’t stray too far from Carmel or the immediate downtown area. The place is spacious all dark wood even some that appeared to be old barn beams.The patriotic theme and the military memorabilia was an excellent choice and a nice change of pace from the more usual modern “clutter”.

They offer a senior menu, with smaller portions at lower prices. Their regular menu has pretty good prices to begin with. Since Pat and I qualify as legitimate seniors we ordered off the senior menu. Pat chose the 7 inch personal pizza, with two toppings for about five dollars. The crust was definitely of the premade frozen variety. However the sauce and toppings were generously applied and the pie was nice and crisp. Overall Pat thought it was a pretty good job. I opted for the calf’s liver. A plate lunch featuring liver and onions with gravy, mashed potatoes with more gravy, country-style green beans and coleslaw. All for around six bucks. I won’t quibble about the age of the cow that sacrificed its organ for my lunch, 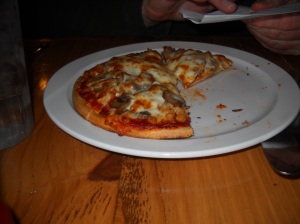 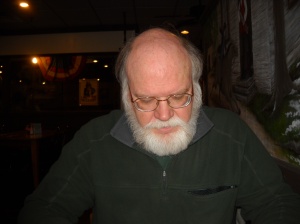 however I can definitely say the liver was overcooked, and the onions were far from caramelized. The gravy on the liver was a brown mix gravy, a pretty good mix though. I think a good mix beats a bad scratch gravy every time; if for no other reason than consistency. Mashed potatoes were instant and the gravy was a tasteless white gravy mix. Why the difference I have no idea. The green beans were typical canned cooked down with bacon pieces, tasty but common.For some reason some lady walked over (an employee, not a total stranger) while I was chewing asking about my liver (my luncheon liver not my beer soaked personal one) and furthermore commented that their country green beans were the best in the world.She was raised in the country and she knew what she was talking about. After I had swallowed was able to speak again the only thing I could think to say was “I haven’t eaten all the green beans in the world so I really couldn’t say”. At that point Pat intervened and they had a pleasant little chat about country living as a child. The only reason I mention this is I had the impression that if I told her that I thought the beans sucked she would  argue with me.Adjacent to the dining room they have an ice cream parlor that serves 27 different varieties; they also make their own cobbler. But we were too full to even think about dessert. You see even though my lunch was mediocre I could still clean my plate; that’s what a pro does.As for the coleslaw it was pretty good, they make their own dressing it was just a little sweet for me to eat it all.

Before I sign off I would like to mention a few peeves of mine about eating out. Servers: when inquiring about your tables please do not ask “how’s everything tasting?”; And always assume the customer wants change back. Asking if they want change is like pandering for a tip.and customers: if you don’t want change tell your server that, it’ll save them an extra trip. Also 10% is no longer the minimum tip.

So to sum it up if you like average food in large quantities cheap and want sitdown service then this is your kind of place.