About three years ago the Sahm’s family opened their first craft brewery, right on the Monon Trail, Big Lug. Shortly after they opened their second Rockstone Pizza next door. I thought a pizza joint was a perfect match to a craft brewery. However after one year they decided to close the pizza joint and turn it into an Alehouse.

I have always been a fan of the way Sahm’s conducts their business. From their side dish offerings to the extensive salad menu and that they still serve a slice of sour cream coffee cake with every salad. These guys know how to run a joint.

I had my eye on their seafood bisque so I was pleased that I could get it as a side; for $1 up charge.

It was a much larger portion than I expected. It was very creamy and had a very good flavor.  Except for the clams you really couldn’t taste any other sea food though.

However I would probably order it again and just consider it a fortified clam chowder.

To go with my “bisque” I got a meatball sandwich.

I found this to be the perfect sandwich size and the soft roll the perfect mate to the tender meatballs. It is nice when the bread and filling both separate at the same time. As for the pricing it is as you would expect. My sandwich was $10.99 plus a buck for the soup. Pat’s tenderloin was $11.99, which I thought was pretty steep. However Pat certainly seemed to enjoy it regardless of the cost. Of course they had beer. Big Lug beer as well as the guest kegs. Once again Sahm’s has hit it out of the park. Good food, good beer and good service. Definitely worth a return trip. With or without a bike.

Well; should the address look familiar there is a reason for it. This pizza place is right next door to the Big Lug. There are 2 other Rockstone Pizzas in town. Fishers and downtown. I have never been to either one but I think the one in Nora is the best. Why? Maybe because they are right next door to a Brewery. More importantly the “Family” Brewery. Yep this place is part of the Sahms family.

Last week when we left Big Lug we noticed that Rockstone had just opened the same day. We had to go have a look-see and liked what we saw. They offered wood fired pizza and pasta as well as all the stuff you would want in an Italian styled eatery.

The place is, as you may expect, beautifully appointed. The tapper area is a polished stainless steel curved to follow the contour of the bar. This is the best pictures I could take.

I know it is hard to see with all the shine from the stainless but it is a magnificent sight.A curved wall of shiny steel with all those beer teats sticking out, ready to serve.

The prices were in line with what you might expect from a “premium” pizza joint. Pat got a 10 inch Classic Trio for $10.95. That was a wood fired pie with sausage, pepperoni and crimini mushrooms with house sauce and mozzarella cheese. 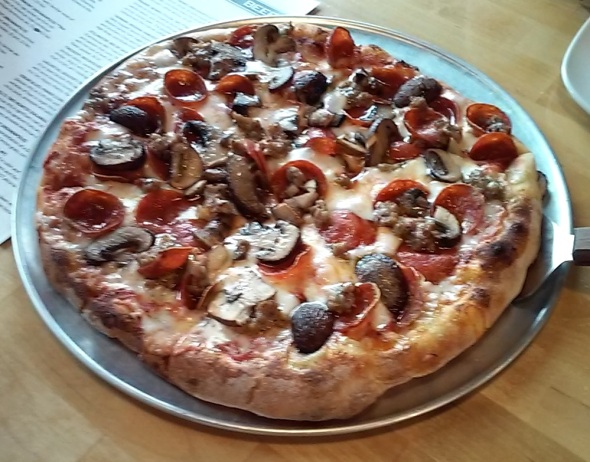 I opted for one of their Focaccia Sandwiches. I chose the Roast Porketta. That is shredded roasted pork topped with carmelized onion and arugula. I chose that because it was a simple construct. Pig and sweet onion with a slightly bitter green. Their execution was pretty good. The onion was actually carmelized and they weren’t chintzy with the arugula. So the result was pretty good, but I don’t think it would take much to make it excellent. 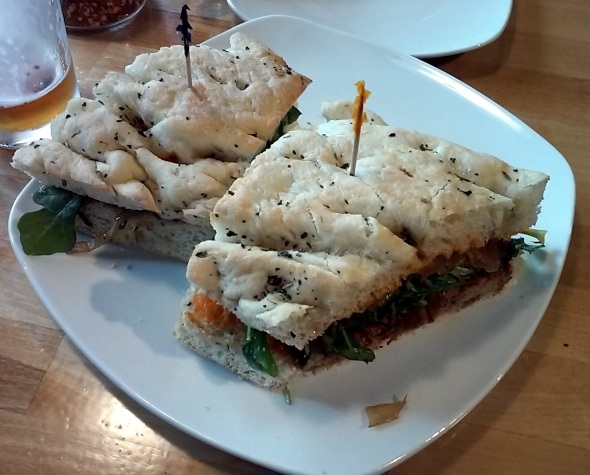 The bread is house made and very good. The individual components fit well together but I think the portion and dispersal could be reconsidered. Adding a bit more meat and onion would help,but if nothing else make sure the product goes all across the bread to give a through cover. A couple of the bites were a bit dry.

Well I forgot my soup. My focaccia was$8.95 and came with a side.I chose a bowl of Shrimp Bisque. I got a big bowl of soup. It had a great flavor and a very nice texture. I ate the entire bowl, with a bit of help from Pat. So no wonder I had to take half of my sandwich home.

I had a half of a slice of Pat’s pizza and I was quite impressed. Now I will be torn when I return. Sandwich or pie. They also have wood fired pasta dishes,so that is something to keep in mind. Pat and I were both pleased.

This is the oven. Beautiful ain’t it.