Well there is another new joint in Irvington. A self-described pancake house that serves breakfast all day. I hope this place lasts longer than the 2 previous tenants. If they don’t survive it won’t be because the food isn’t good or the prices are too high. Most of the dishes are in the $6 to $7 niche with specials going for $9 with soup or salad included. As for the quality of their fare the items we had were top-notch. 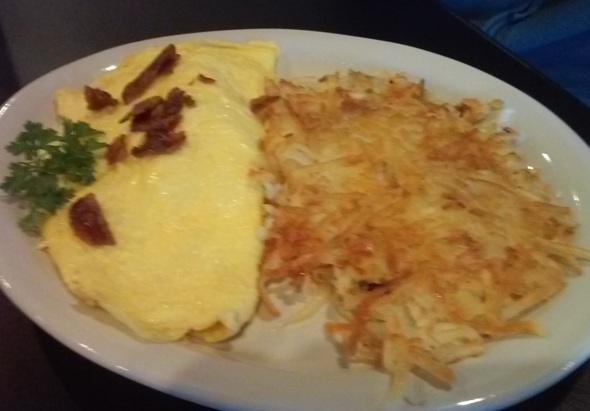 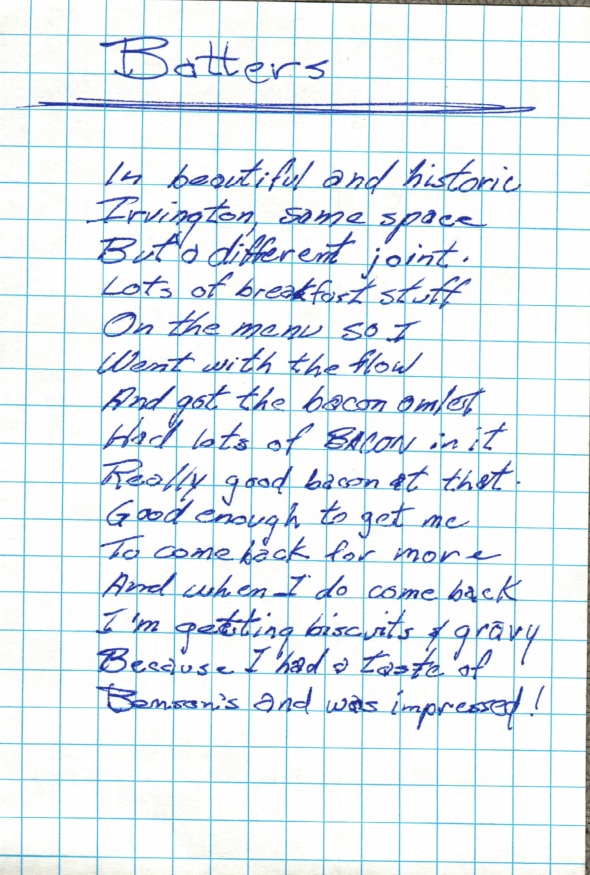 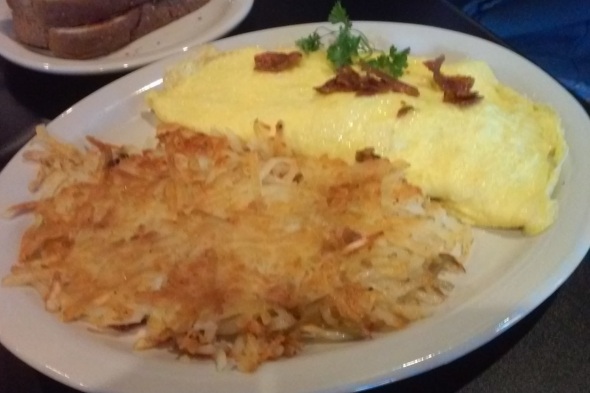 I opted for breakfast as well. For me it was “Bases Loaded” (?) for $7; the same as Pat’s omelet. Mine was biscuits and gravy with 2 eggs and 2 bacon or sausage. 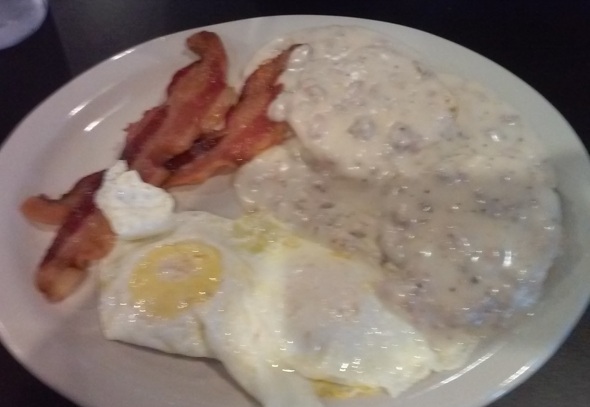 I was quite impressed. I believe I have tried every biscuit and gravy in town and I think that Downtown Olly’s does it best. Now I may have to reconsider that proposition. The first bite was loaded with sausage flavor and a hint of bacon fat, as though bacon fat was used in the making of the roux. It could have been from the bacon on the side but what ever it was I hope they do it every time. The gravy had a very creamy quality that most country gravies don’t have. It was an excellent dish and bargain priced at 7 bucks. 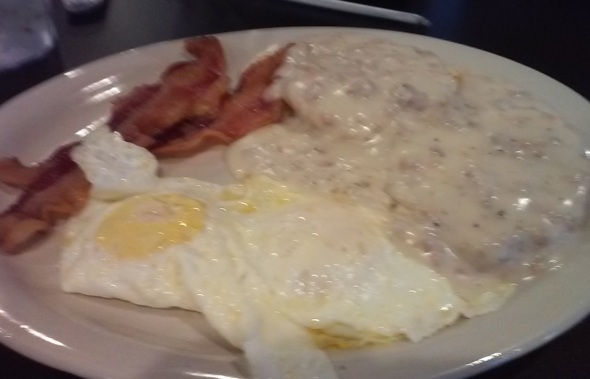 The only thing I would do differently is order a side of toast to sop up all the gravy and egg yolk. I was able to used Pat’s crust from his toast so none of it went to waste. I think I will be back again. They do list their specials on Facebook so I am keeping my eye open for liver and onions. I have it on good authority they do a respectable job with that diner classic.

I am sure very few people are familiar with this name as it didn’t open until August 18.you. It is a buffet open from 7 AM to 11 PM Monday to Friday and 7 AM to 3:30 PM on weekends.It was built for; but not exclusively for; IUPUI students. The building, a former hotel now offers housing for students as well as class rooms. In addition to the buffet. So this outing is a first in 2 ways. It is the first time we intentionally set out to eat at other than an independent joint and it was also our first foray out for breakfast. Pat had lunch there the first day and was quite impressed.

In all honesty my initial impression was disappointment. The first station I hit was the heat tray station. It features the immediate foods. Scrambled eggs, sausage etc.  It was in total disarray. It doesn’t take much to fluff up a buffet. As for the food. The eggs were quite good. Moist and fluffy. Their sausage was beautiful to look at but only mediocre to eat. They also offered the worse excuse for bacon I can imagine. As for the potatoes. Well they were more hash tan than hash brown. 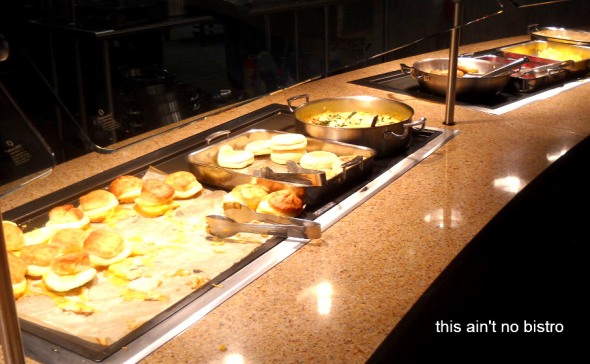 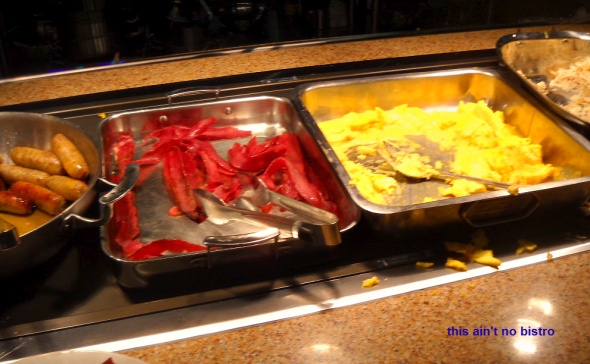 While I was eating I was able to look around and realized how large a venue it is. They do indeed have all the bells and whistles that you might expect in a breakfast buffet. They offer a first-rate omelet station. A make your own Belgian waffle area with several toppings and of course a plethora of dried cereals. From granola to Fruity Pebbles. 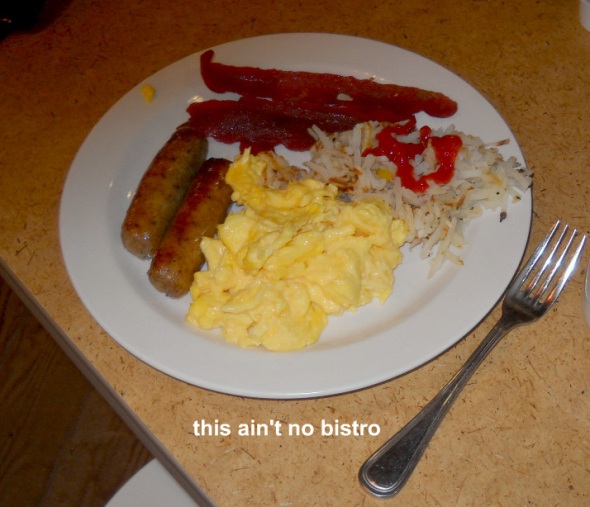 After coffee I had a very nicely made egg white omelet, with spinach, mushrooms, tomatoes and a touch of white cheese. 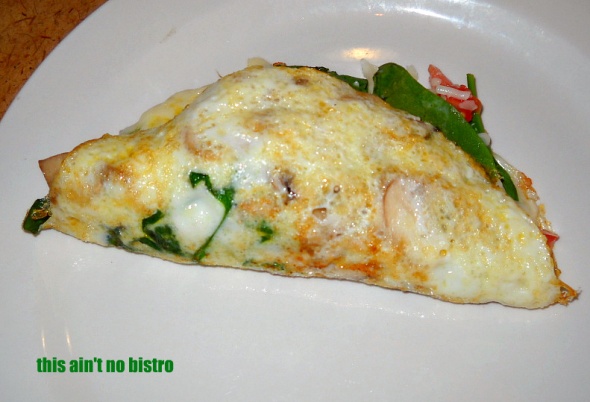 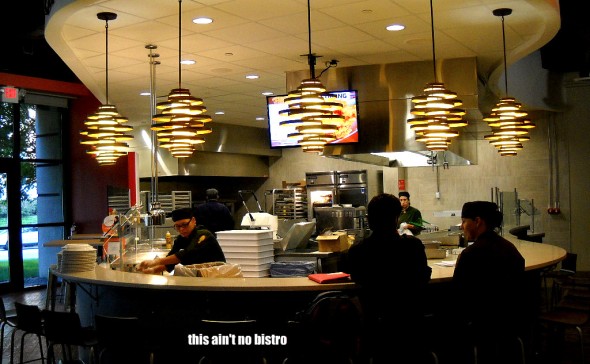 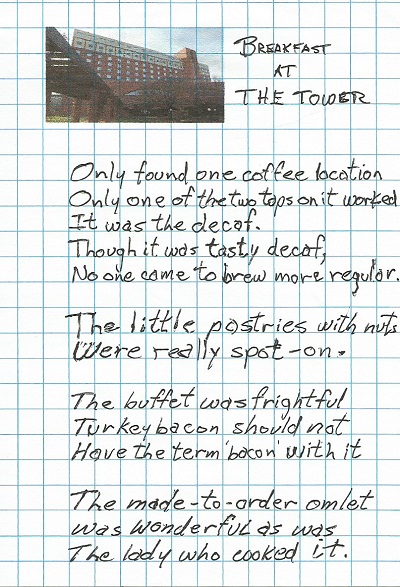 So…In a nut shell I think this place has possibilities. It definitely needs some tweaking ( NOT TWERKING). More attention to detail. Maybe a change of product. And definitely the boss needs to put the proverbial clog up some bums. I am pretty sure Chartwells will sort things out. Someone has a lot of money invested in the place. And at $6 and some change it is well worth some patience. I am planning on trying lunch. I hear that is where the action is. They have all of their stations going and it is priced under $8.

On a Sophomoric side note. Pat informed me that University changed the name of the building to Hines Hall, and the 2 letter designation is HO. That gives a whole new nuance to the question. “Where you having lunch”?