I am sure some people will ask the same question that is always asked when a new brewery opens. “Do we really need any more breweries?” Well I don’t see how that is possible. Can you have too much happiness or too many smiles? I don’t think so.

Happy Brewing opened in one of the defunct Double 8 grocery stores. It opened about 2-3 months ago with typical brewery hours. No lunch just evenings and noon opening on weekends. My first trip there was on a Sunday to sample some beer. I really enjoyed the beers I tried. They have a nice ale and a great cream ale but the show stopper was their Happy Hopper. Be advised though it has a ABV approaching 11 so it is best consumed in small quantities. Their cream ale is less than 5 ABV so it is more like a session beer. A brew you can drink while mowing your lawn. I think the owner Gabe has plans on canning it in the future. As of the past week they took the bold step to open for lunch.

Their menu is small and concise and it is all done in a kitchen without an exhaust hood. For those who don’t know all commercial kitchens require an exhaust hood when the cooking process produces fumes or smoke. Further more you will also need a fire suppression system. All of this runs into a bunch of dollars. Dollars they did not want to spend at this time. So now they have an impinger conveyer belt oven, a Panini press and a soup warmer. I think they pulled it off well.

On my first trip there I had their Italian sausage. It was a solid sandwich. The sausage had a slight spiciness to it but what carried the dish was the red sauce. It was very good. I ordered it with chips and pickle but in the future I will probably just opt for the sandwich alone. Beer carbs are superior to chip carbs. 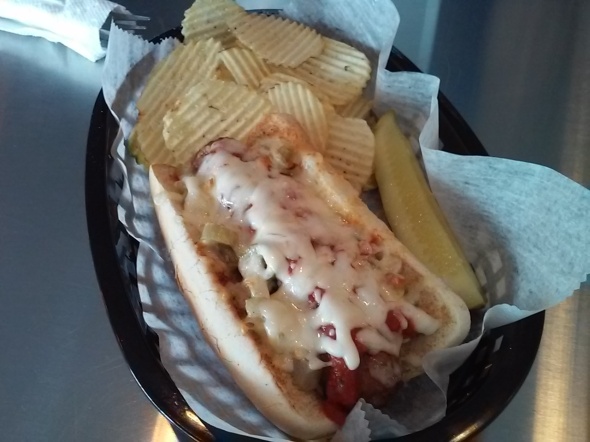 On my return trip I ordered a pizza. They buy all the pizza product from Delco a Hoosier firm founded in 1957 that sells all things Italian related. That includes the raw dough they use for the pizza and the Calzone.

I thought it was a nice pie. The crust had a slight chew and again that marinara sauce has great flavor and richness.

I have only tried 2 items on their menu but I plan on trying more. This joint is very close to home so I can see myself there weekly. I had a very good conversation with Gabe on my first lunch trip. He has some great plans for his place. Patio seating and even a rooftop beer garden and in time he would like to have a “proper” kitchen. I am always excited for new places to eat. Especially one so close.

We had planned on having lunch at the only Russian restaurant in Indianapolis. It has been around for a while but only open for dinner service. I discovered this week that they had started serving lunch . I was really excited but I have been disappointed before. I looked up back up joints in the area just in case. Well, they changed their hours and reverted back to dinner only. So I told Pat that he had a choice of Indian or American pub. He decided on American Pub. 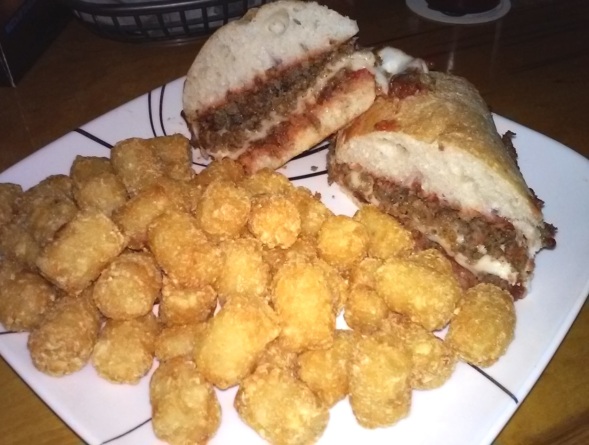 The cheese curds were very good. They weren’t built-in house but they were tasty. I don’t think much on the menu is house made. Surprisingly enough it is a one person kitchen. Our bartender/cook was the manager ,who was left by herself because the bartender called in sick. That young lady rocked it.

I had wanted to order the Stromboli but since Pat beat me to it I ordered the Roast Beef Panini.

It was an interesting sandwich. The meat was deli roast beef, which is a bit dry by itself. The cream cheese and sauce brought a much-needed moistness and the peppers gave the sandwich a nice little hint of spice and acid. Our cook asked how I wanted it toasted; which was a nice touch. Like Pat’s sammie I got a heaping helping of Tater Tots. I took half the tots and half the sandwich home. Both were bargains at $9.

I am with Pat about the joint. Were it closer I would be a regular. For me it wasn’t .the food menu or the expansive draft heads it would be the bartender/server/cook. She was a very capable and charming young lady. As a retired member of the restaurant biz I am glad to see someone young wanting to take up this industry as a profession. She even expressed an interest in going to Culinary School. I thought her excitement for food was great. If you are in the area you really should stop in for a bite and a beverage. I am sorry I didn’t do a proper introduction; so I do not know her name. But drop in and introduce your self. 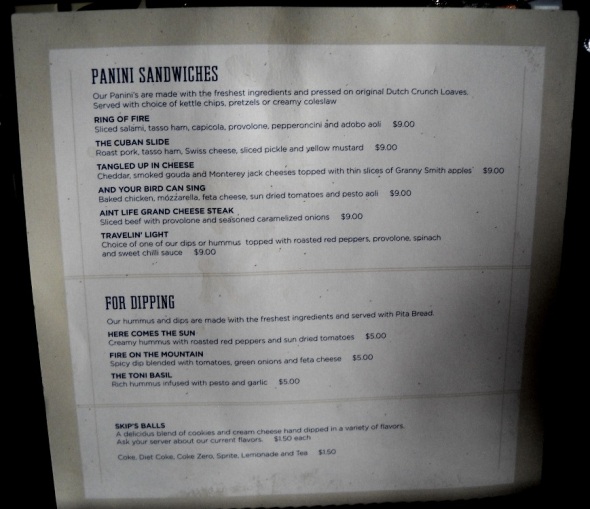 Well I made it back. This is the place I attempted to try Monday; but it wasn’t open. It certainly was worth a second attempt. Skip,the owner, was the Brew Master at Fountain Square Brewery. His Brew Master is his right hand man from Fountain Square. So,needless to say your beer is in good hands with these guys.

Instead of ordering a flight of 4, I decided on a pint of Hefeweizen. Wheat beer seems to be a rarity among local breweries. It is also my current favorite. Their Harmonika is a first class example. If you like wheats I think you will love this.

Afterwards I got a flight. Not your typical order I know; and I think it was detrimental to the proper tasting. The flight is served in ascending order of hops; with the Pilsner first. A craft Pilsner is a delightful brew and yet I found this one to be a bit lacking. I think it was actually the result of having the Harmonika first. That just means I have to go back and have a couple more to make sure. The ales were all well crafted and very drinkable beers.

Now to the food. As you can see they offer a small menu with Panini sandwiches and humus dips and pita.

I always like to try as many different tastes that I can. Which can be hard when you are dining solo. But I persevere. I got an order of Here Comes the Sun humus. Roasted red pepper  with added sun-dried tomatoes. It too was as well made as the beer. Sweet red pepper and chickpeas bolstered with the soft chew of dried tomato strips. Paired nicely with the wheat beer.

At the risk of over doing the sun-dried tomato bit I got the chicken sandwich. I am a sucker for roasted chicken. Especially when you add cheese. The sandwich was really good. Chicken was incredibly tender and the mozzarella cheese was a nice sweet agreement with tomato. Also I think the addition of the feta cheese was good to bring a bite to the party.

So… Needless to say this is a fine addition to the city in general and Fountain Square in particular. Well made beer and well made sandwiches. Also the joint is planning on bringing in live local music. So the summer appears to be shaping up to even more fun. 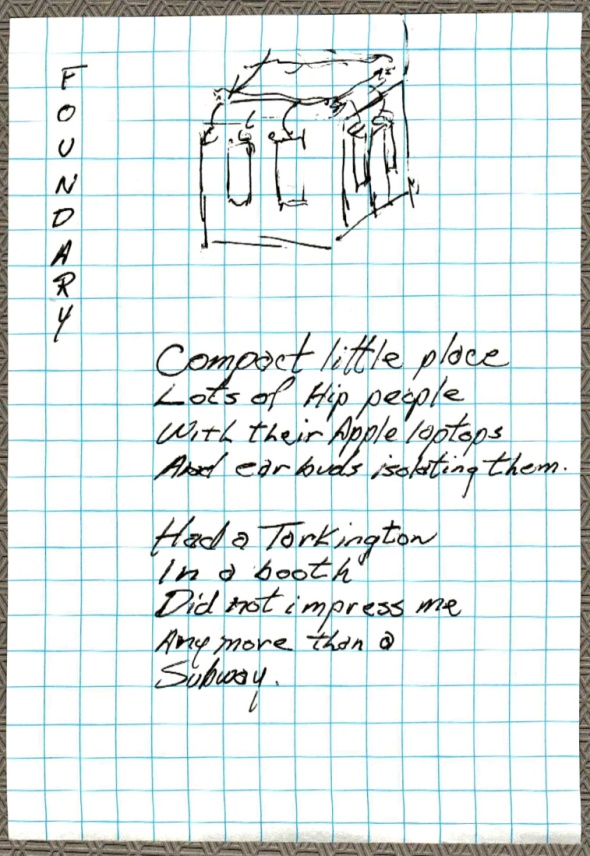