Between the Buns 102 S. Madison Avenue Greenwood In. 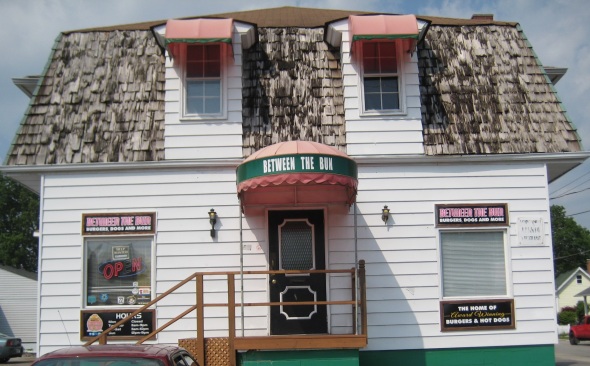 This place opened about 2 or 3 years ago in the heart of Old Greenwood. It is housed in a 100-year-old building and is decorated more or less as an homage to the 70’s and 80’s. The table tops are all decoupaged with cut outs from that era. I think they are pretty cool but the shellac used to cover and protect the artwork can be a bit tacky to the touch. Unfortunately that can lead some folks to mistakenly think the table tops are dirty. Unfortunate.

The big hits on the menu are their burgers and their dogs. The burgers are hand formed half pounders and the dogs are 4 oz. The hook is the clever and creative toppings for them.

They have a lunch menu which features a select number of their sandwiches at a reduced price. All of their items come with fries. Pat and I are both trying to watch are carbs, so I was surprised when he ordered a plain Jane dog as an app. 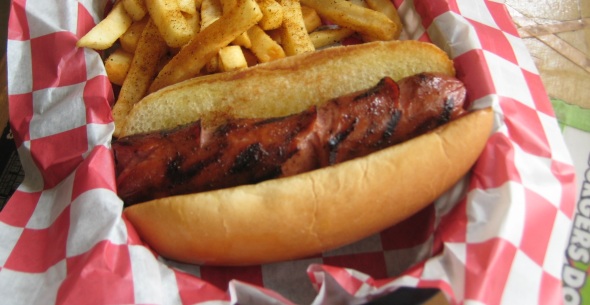 I did get a bite ( a one inch piece) and it was very nice. It had little rips in it as though it had experience great heat. Maybe dropped in a deep fryer and then put on a grill? I don’t know but I think it would have been killer with some relish and mustard. 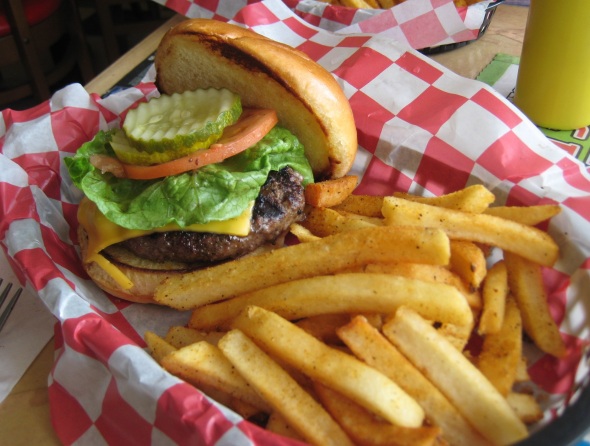 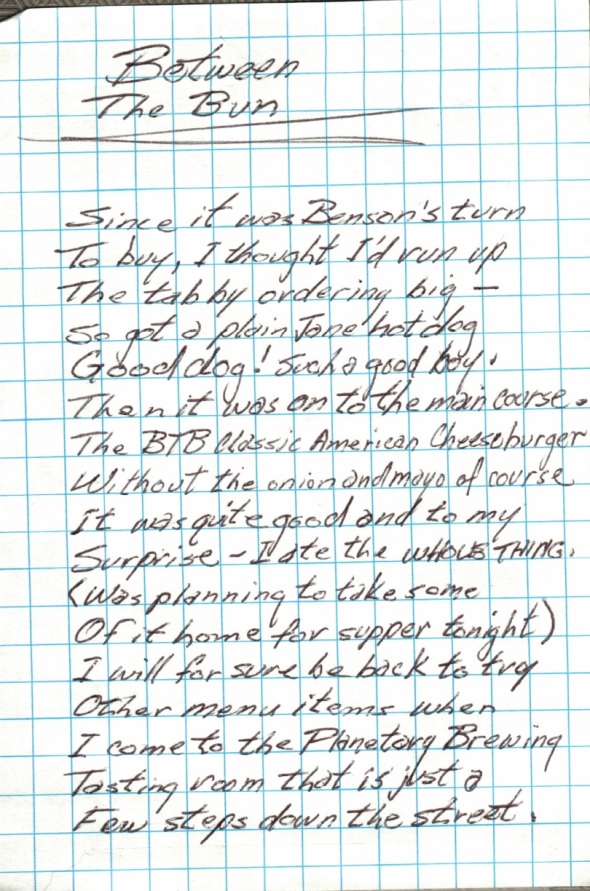 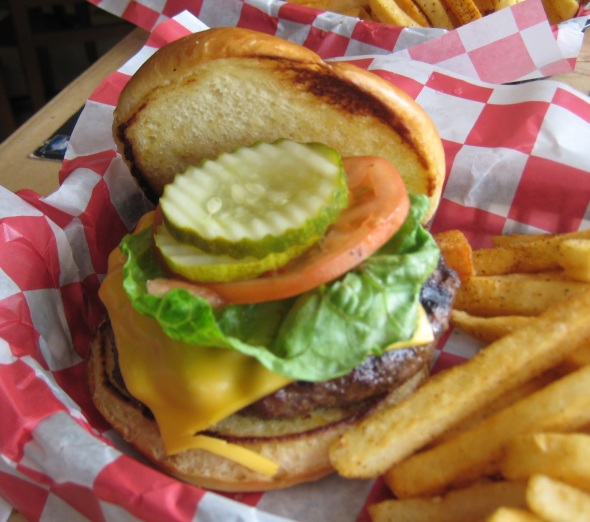 I ordered off the regular menu. A PB&J Burger for $9.99. Sound interesting? It is a burger smeared with peanut butter topped with bacon, pepperjack cheese and jalapeno. jalapeno is the J in the name. Then the thing is drizzled with maple syrup. Crazy. 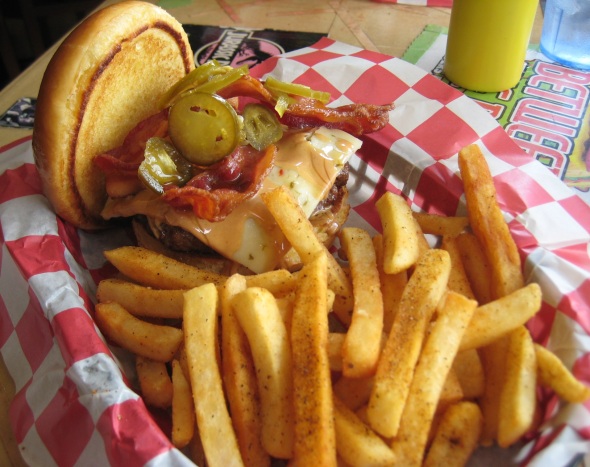 It is a big burger and I had to cut it in half to eat it. First thing they cooked it mid rare for me; which is a big plus. Secondly the burger is really good meat. Finally all the odd toppings made sense. The peanut butter melted onto the burger bringing a degree of fat to the lean meat. The chiles and cheese brought some heat and the bacon brought a nice smoky crunch. The syrup just brought a sweetness that your taste buds never expected but appreciated. 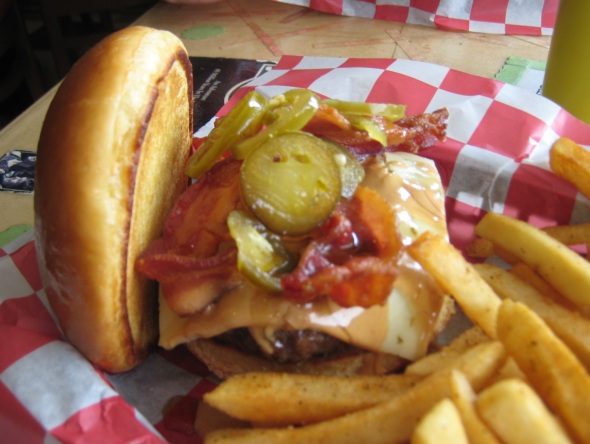 One last thing. The french fries. I really liked them. They were nice and crisp on the outside yet a little mushy on the inside. As for the seasoning I found it to be a rather sublime accent to the potato. Most house seasonings are too spicy or too salty. This was like Goldilocks. Just right. 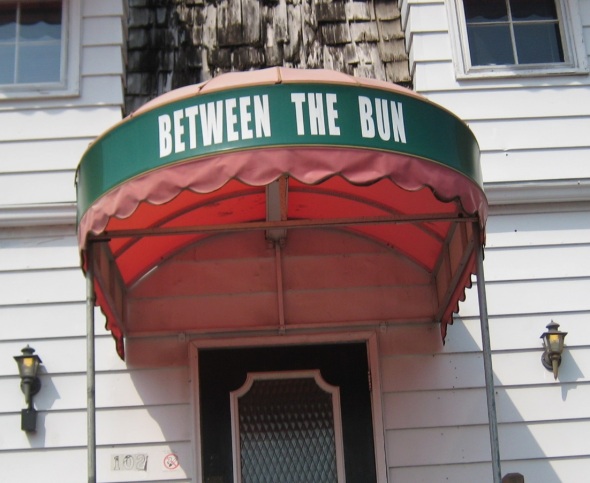 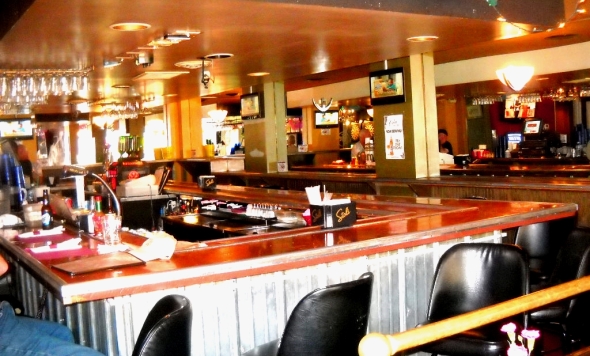 This is what you see when you first walk in. The joint has been around for about 12 years. Unfortunately I have never heard of it until about 1 year ago. There is not a whole lot of reviews for the place. I am not sure why. It might be because it is a 24 / 7 joint. It is open for business 24 hours per day. They don’t sell liquor from 3 AM to 7 AM. Like the French Quarter in New Orleans.

On the day I went to Soupremacy I thought I would check out Olly’s. Before Pat and I visit a place I like to know what they offer. So… I stopped by on the way home. The joint has some great specials and some pretty good food. 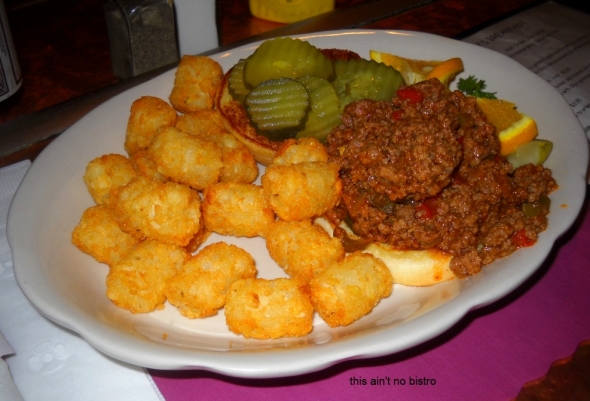 That day I had their sloppy Joe sandwich, with tater tots. I know… sloppy Joe is pretty much country, and pretty much “what ever”. But…good food is eternal and their version is really quite tasty. The tots weren’t as tasty as Slippery Noodle,not as spicy, but still good. The bartender, Alex told me he was from the South and back home the dish is called Spanish burger. I thought that was interesting. I took quite a few pictures of the place because I thought it was rather eclectic. If you had to define the style I think it would be referred to as “Urban Informal”, or maybe “Urbane Tacky”. In either event I found it to be comfortable. 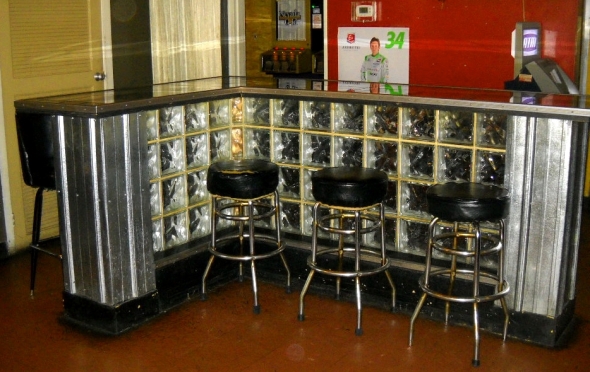 I know glass blocks are to decor as white bucks are to men’s shoes, but here they work. 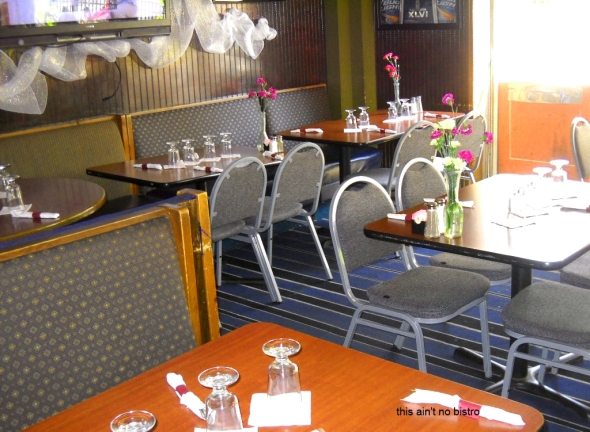 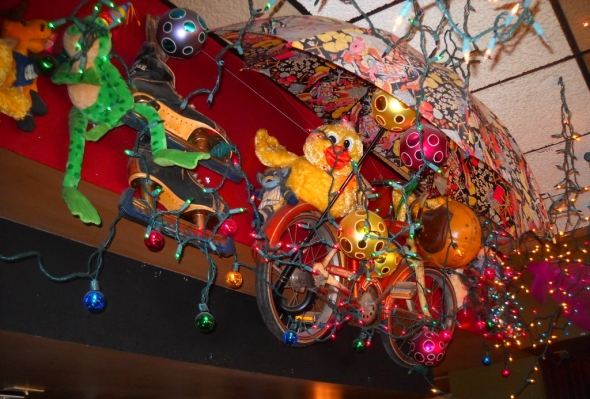 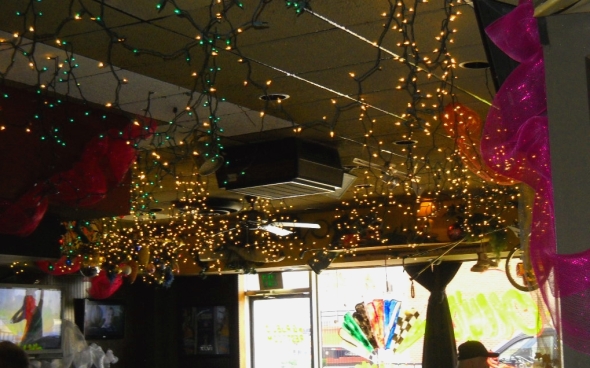 Their menu is huge. I scanned it and I intend to add it to this post; it is entertaining just to peruse the menu. Since it never closes it has a separate breakfast menu as well. For a 4 hour period in the AM they offer 2 eggs, potatoes, sausage or bacon choice and toast for $1.99. Now that is worth getting up early for. 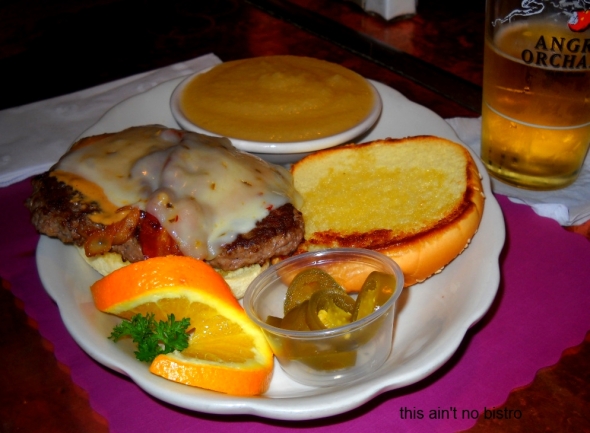 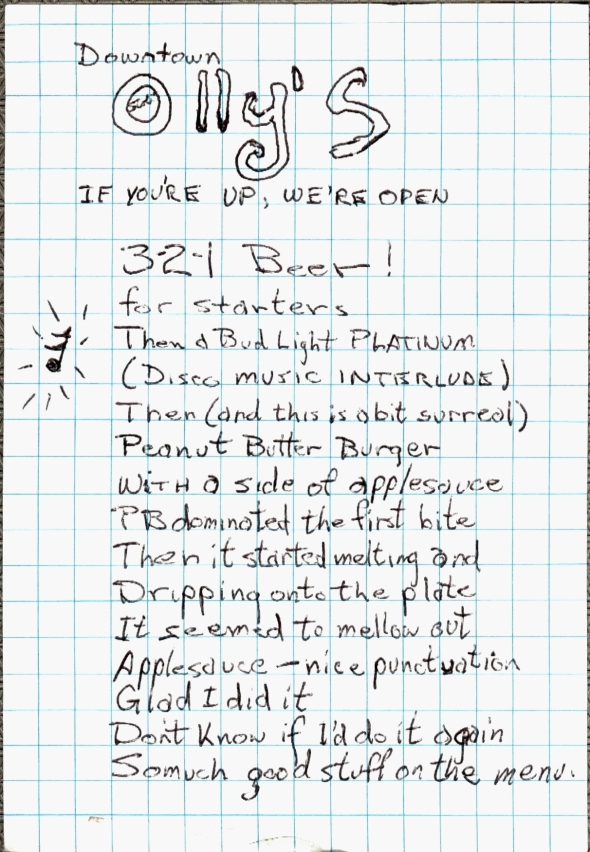 Patrick is leaving out the best part. In addition to the peanut butter the burger had jalapeno, pepper jack cheese and bacon. But I guess you can see that in the picture. 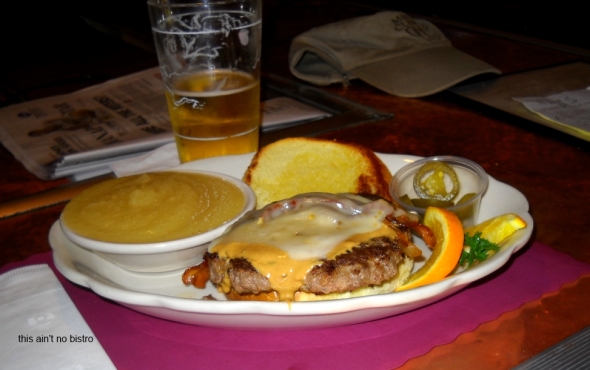 I ordered one of the lunch specials, for $7.99. Stromboli Pasta. That would be – sausage, pepperoni, peppers and onions in a red sauce over linguine. 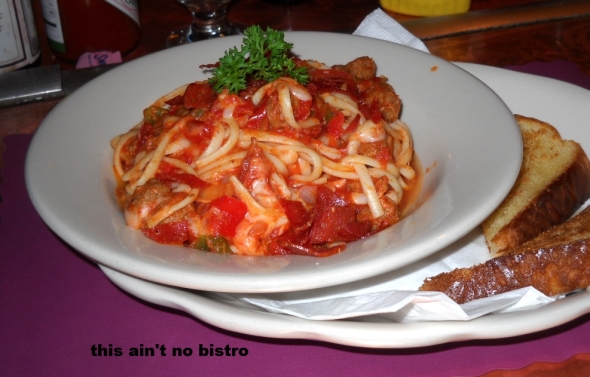 The result was a very tasty dish. It tasted like a pepperoni and sausage pizza with noodles. I wouldn’t hesitate ordering it again. I also think it was a clever way of cross utilization of product. Every food item on a menu should be used in at least 2 different applications. In my opinion.

So for a good lunch or dinner Olly’s should be on your short list. Good food, good prices and good specials. Thursday’s drink specials were $2 domestic bottles and $2 well drinks. And since this is Indiana the drink specials are good for the whole day. And lastly but not leastly the service is stellar. Thanks again Alex. 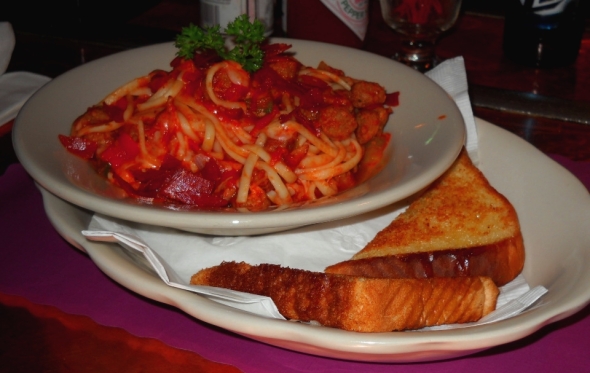 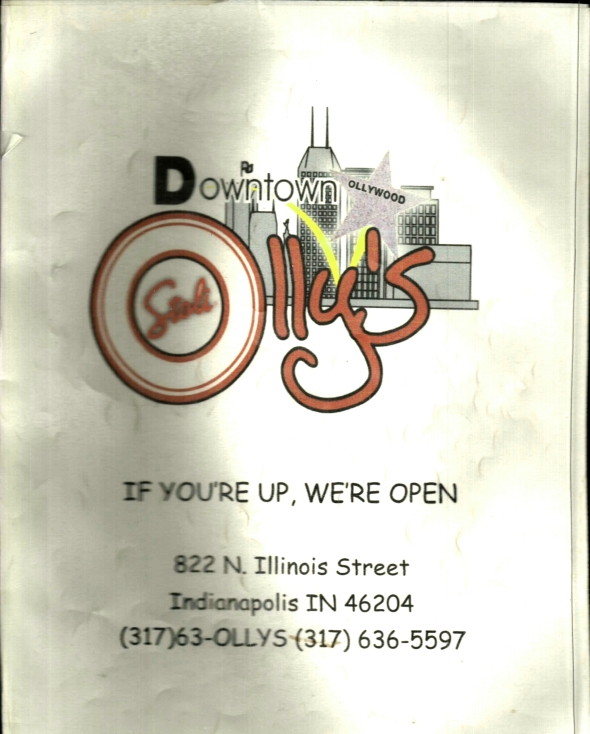 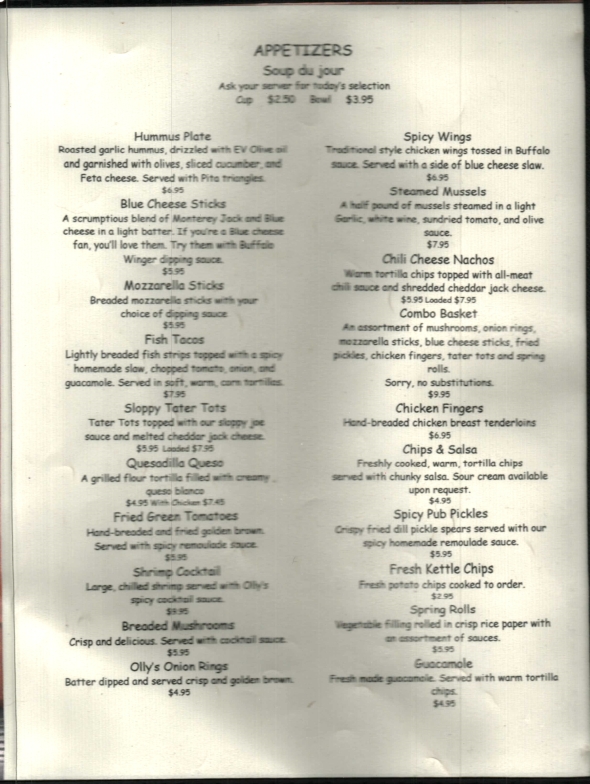 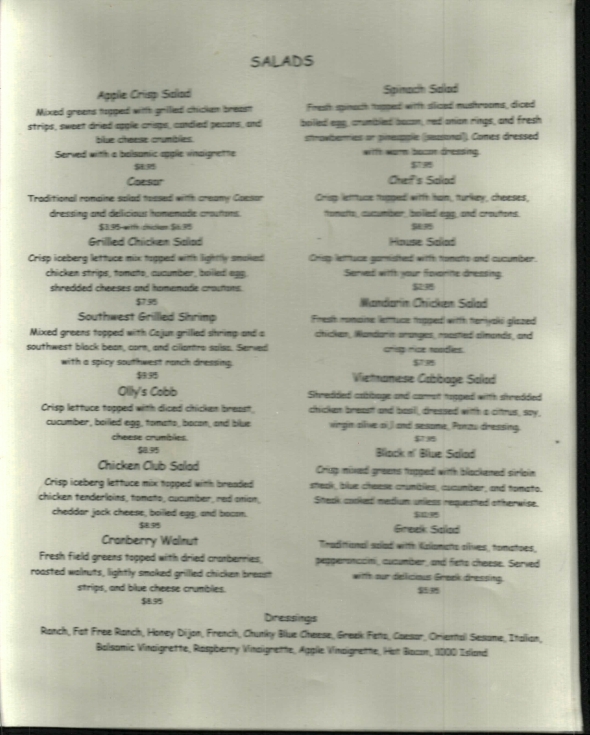 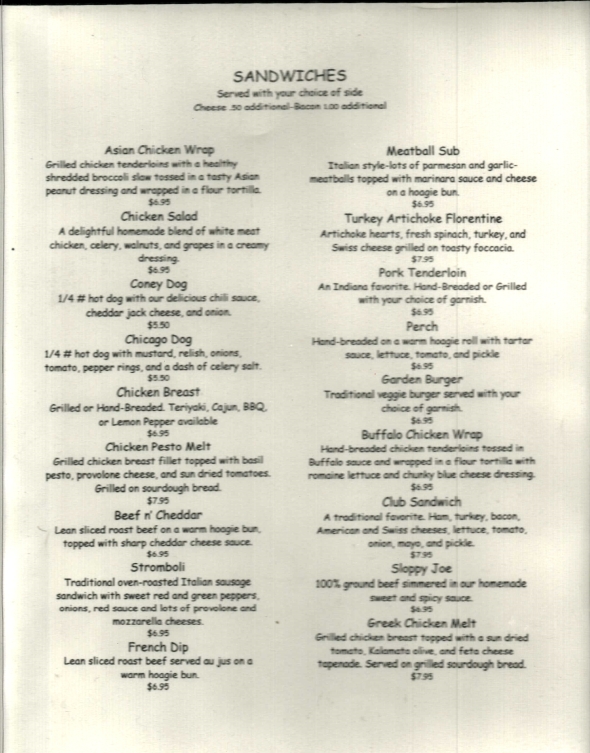 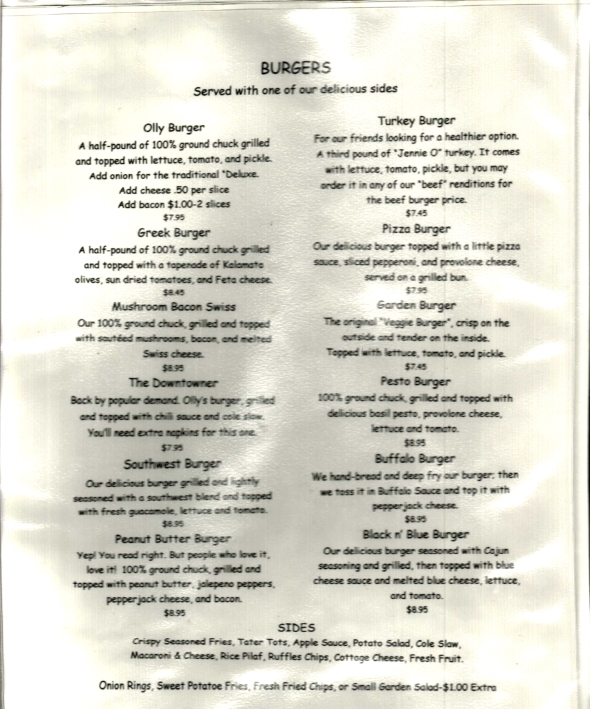 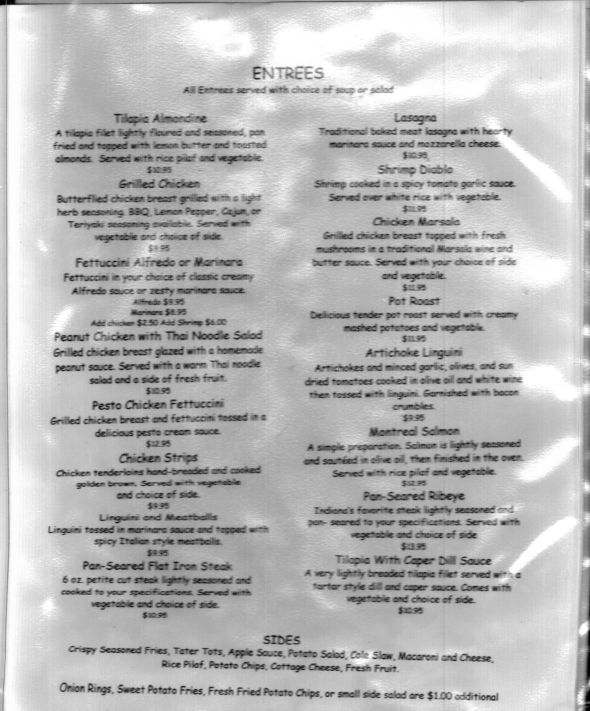 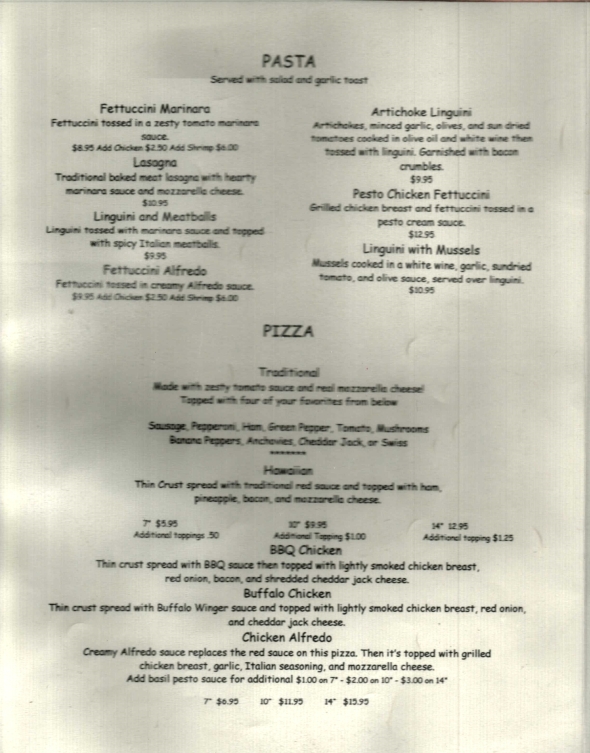 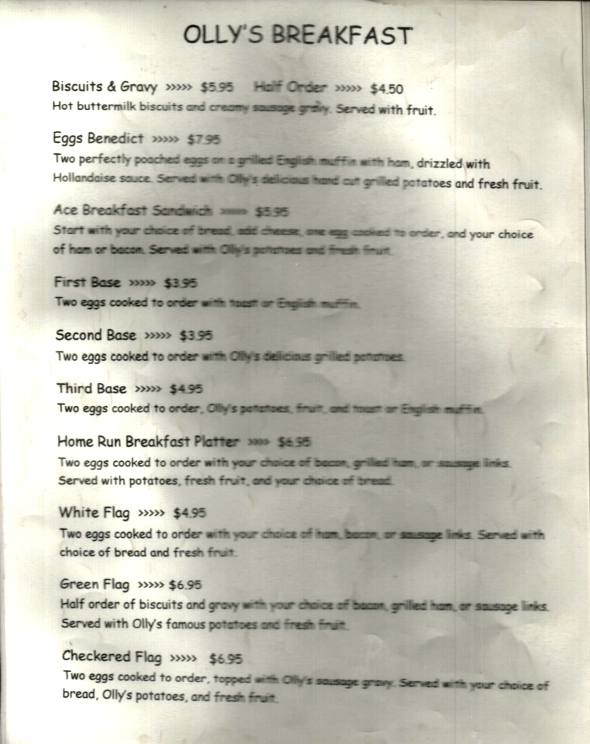 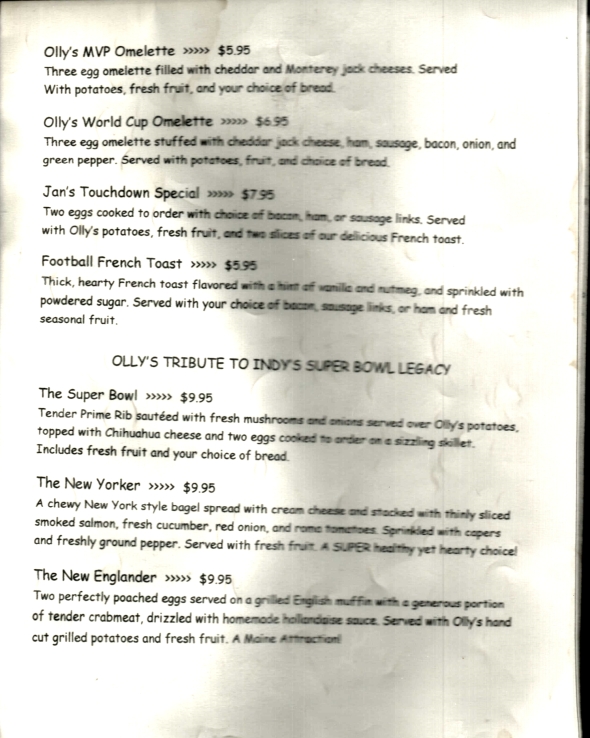 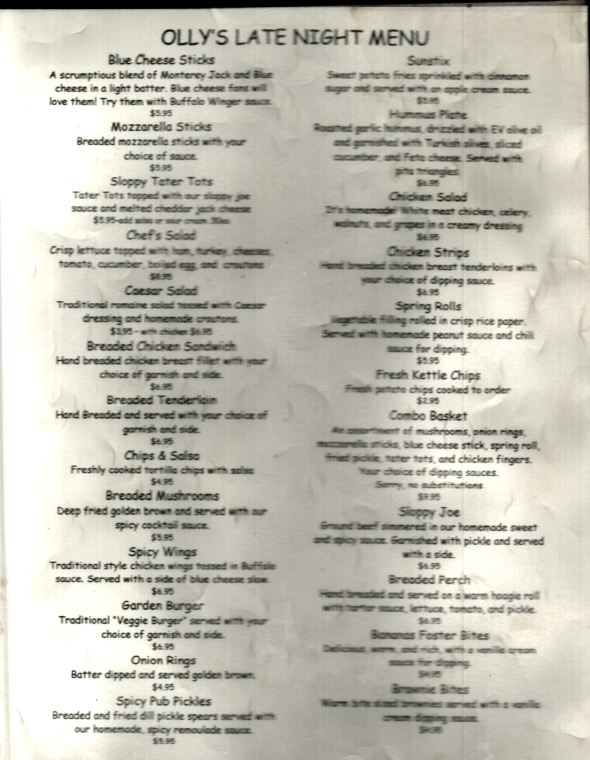