Upland is a successful brewery from Bloomington. In the early days of the blog we visited it. About 10 years ago they opened up a tasting room on College. It was a place where you could have a few beers and maybe get a growler refilled. I was only there once or twice because they never seemed open when I wanted to go. A couple of years ago Open Society opened a large space next to Upland’s. When they closed Upland moved in and now they have a real restaurant/bar at a very convenient location.

When I go out to eat I try to get stuff I don’t like to make at home. Either it requires too much time or the ingredients are hard for me to get. On this day I opted for their grilled cheese.

I love each and every one of those ingredients. 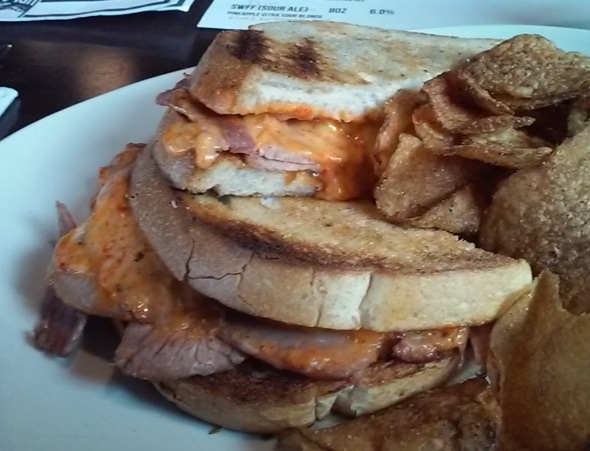 It was a messy sandwich but what should you expect? The pimento cheese was very good and the ham had been browned a bit on a flat top so it had a nice crispness. The bread was well toasted and it even had marks that it been but on a char grill. I like that because it brings another layer of flavor. The Peppadews seemed to have gotten lost but it was still a good sandwich. They offer it with fries or chips from the Broad Ripple Chip Co. I got chips. They were okay nothing extraordinary. 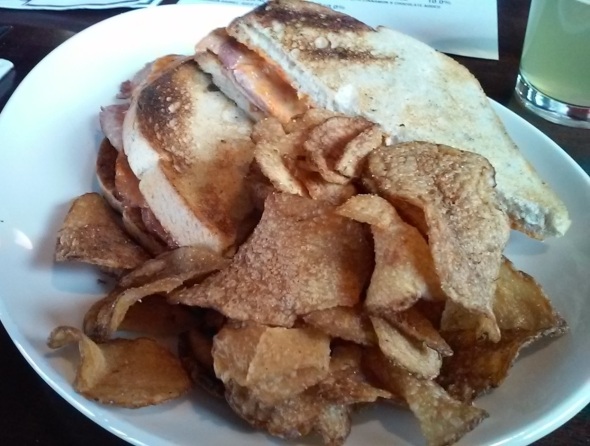 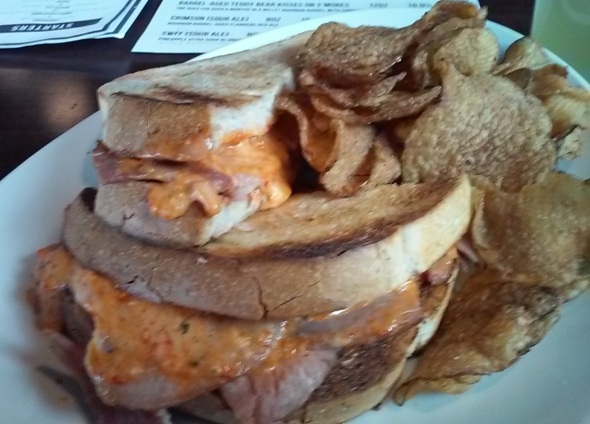 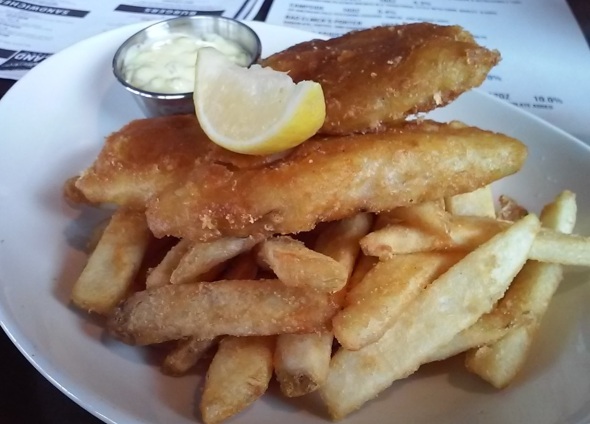 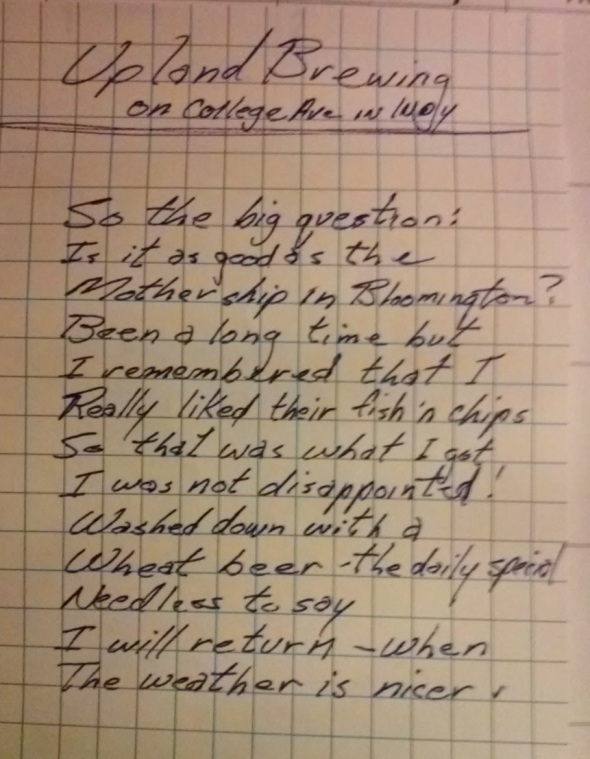 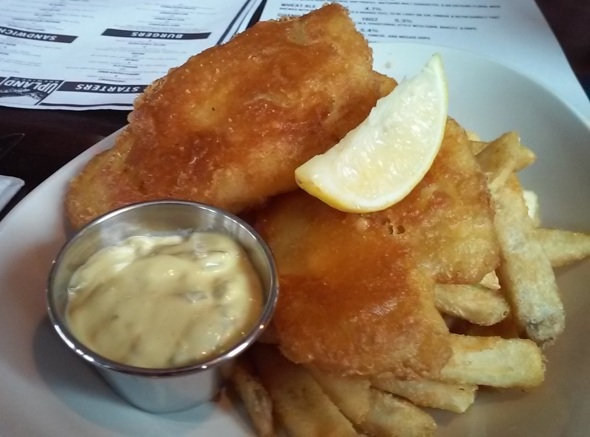 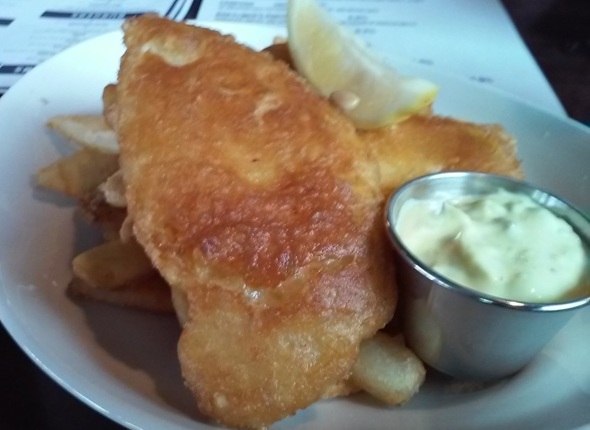 We knew the beer was good and now we know that their food on College is on a par as the food they serve in Bloomington and that after all is the Mothership.

The sign is a bit misleading. The Thunderbird opened as a night club in 1950, and “rocked” it old school until 1972. I was never there. I went to old-time “divey” bars and for late night entertainment there was Broad Ripple.

I think this new incarnation opened 2 years ago as a dinner house. They just recently decided to give lunch a go. Here is a link to their website.

I suggested this place a couple of weeks ago. I think Pat agreed just to humor me. As he has said many times he is a simple man with simple tastes. Also he has a well know aversion to onion. 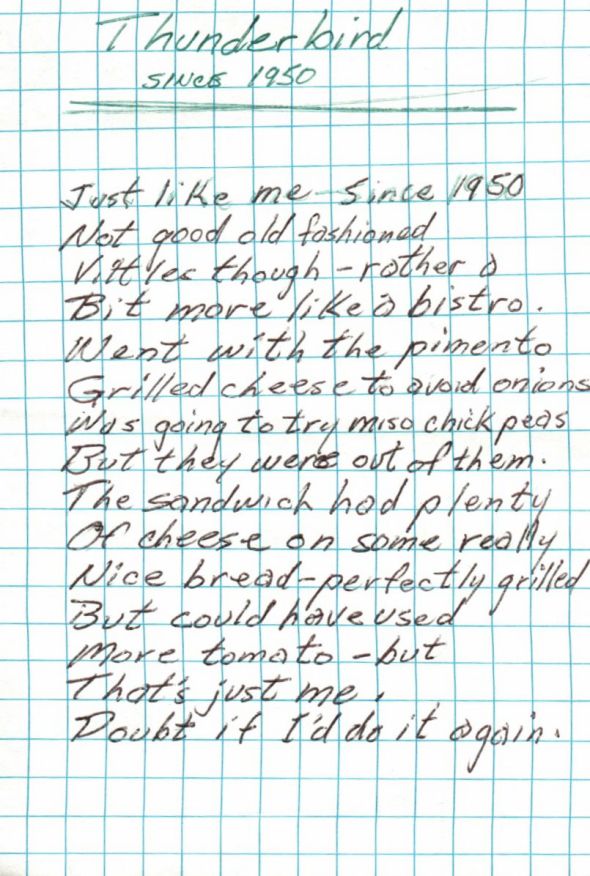 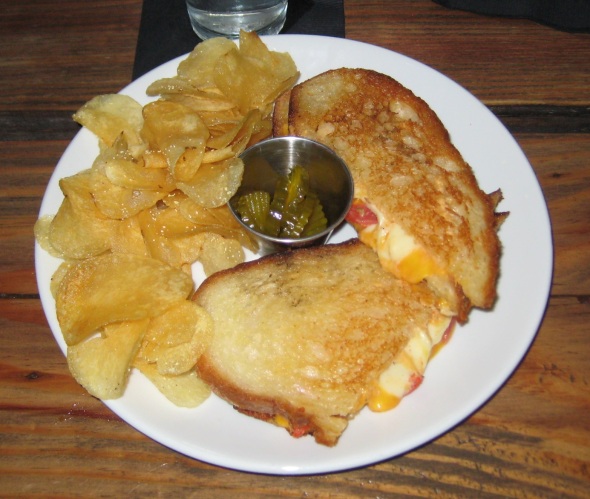 I don’t agree with Pat’s assessment that this place is a bistro. Their food is pretty much comfort foods with a Southern focus and a chef driven spin. Are their prices high? Yep;on some items. A 9 buck grilled cheese is high. On the other hand at $3 my biscuit sliders were quit reasonable. Especially when you realize a McDonald’s bacon, egg and cheese biscuit costs more.

One thing Pat commented on was how oily the chips were. Tasty but oily. Evidently they flash them in the fryer for a bit and then sprinkle them with old bay seasoning.

They have okra fries on their menu. I like fried okra. Finding it around here is difficult. The few places that offer it give you this frozen stuff in a bag . Here they buy it fresh, cut it and fry it to order. 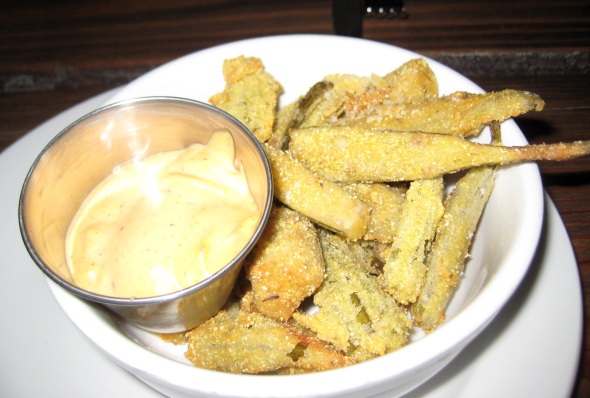 You get a nice sized bowl for $5. They offer a spicy mayo based dipping sauce I wasn’t really a fan of. I did enjoy the okra though. It is pickled before it is breaded and fried. Which adds a whole new layer of flavor and it also adds a bit of acid to the mix. Now for the biscuit sliders.

They offer two options. Braised pork belly and fried chicken. I got one of each. The belly was melt in your mouth tender. They topped it with an onion jam, which was pretty sweet. It fit well with the fatty pork but after a few bites it became almost cloying. The next time I get it I will 86 the jam.

You can get your chicken biscuit mild or hot. I chose hot and it had a pleasant burn. The chicken biscuit comes topped with their slaw and house pickles. The slaw was vinegar based and played off the spicy crunch of the chicken nicely. My taste for slaw leans more towards the creamy style but this variety did its job well. I think a side of the slaw might be too “dry” when eaten by itself. The biscuits themselves were nice. Flaky yet substantial enough to hold up to fried chicken. The pickles were unique to my taste buds. They are of the refrigerator variety. You slice ’em; pickle ’em and stick them in the fridge. I enjoyed them.

This place is well-appointed with lots of wood and custom light fixtures. The whole joint has a dimly lit ambiance. Suitable for an evening of cocktails and snacks. I think that would be the best way to enjoy this space. With some friends and a few cocktails and eats. They offer craft draft as well as wine but I think they take their mixed drinks very serious. The bartender has several bottles of syrups that they use to flavor some of their liquors. The bartender is also serious about Bourbon. He likes to keep Bonded bottles around. Nothing says commitment like a few bottles of 100 Proof bottled in bond liquor.

I have looked forward to this place opening for a while. It is the restaurant part of 12.05 Distillery. The distillery opened several months back;the second one in Indianapolis. The whole facility, distillery,dining room and kitchen is in an old bank building,built-in 1924. The exterior features the original terra-cotta exterior and uses an abundance of old wood in the interior. The name is a dedication to the date when Prohibition ended. December fifth. I think they are trying to capture a 1930’s vibe and the menu reflects that.

The chef did his due diligence in making some dishes reflective of the era. They offer a Mock Turtle soup as well as a Cream Mongole.

I opted for a cup of a cup of Mongole to start. This is a crazy combo of split pea, creamy tomato and various root vegetables. It was very earthy and flavorful. It would be great winter time fare for $4 per cup and $8 for a bowl. 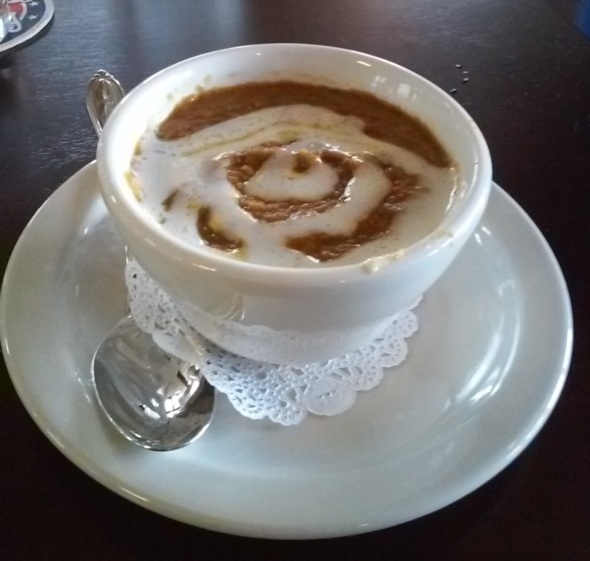 The only critique I could make is the soup,as good as it was cries for some cracker. A bit of a crunch to balance the creaminess.

For my main dish I was really torn. They offer a Hot Brown, a Monte Christo and a smoked beef Manhattan. Well I decided on the raw Beef “sandwich” for $13. It was a half pound mound of chopped steak on a thick slice of a rye type bread, topped with a raw egg, pickled onion and a neon relish. 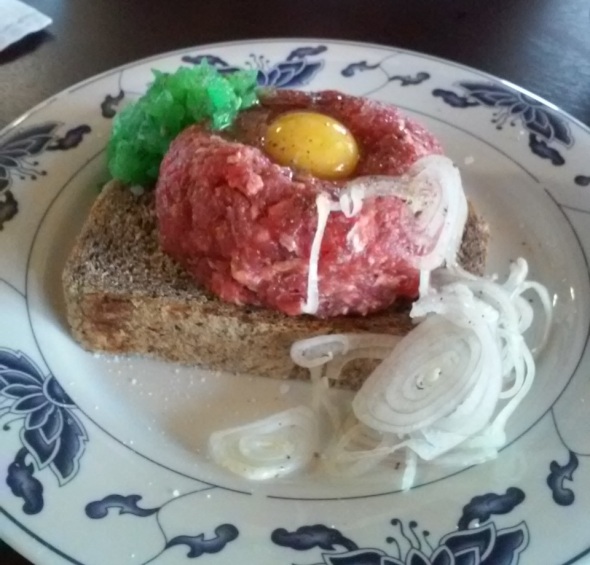 I thought it was a very elegant and tasty bite for lunch, but then I have a thing for tartare and Kibbeh Nayyeh and the like so I jumped at the chance. I think there are only 2 joints in Indy that offer this particular dish. Once again I must pick a nit. I don’t know if serving it on a thick slice of bread is the way to go. I slid the meat off of the bread and ate it with pieces of the bread I tore off. Luckily Pat didn’t eat all of his bread so I had enough to finish. Also I always though naan was a thin flat bread. Hey I may be wrong. In either event I admire the person that put it on the menu. 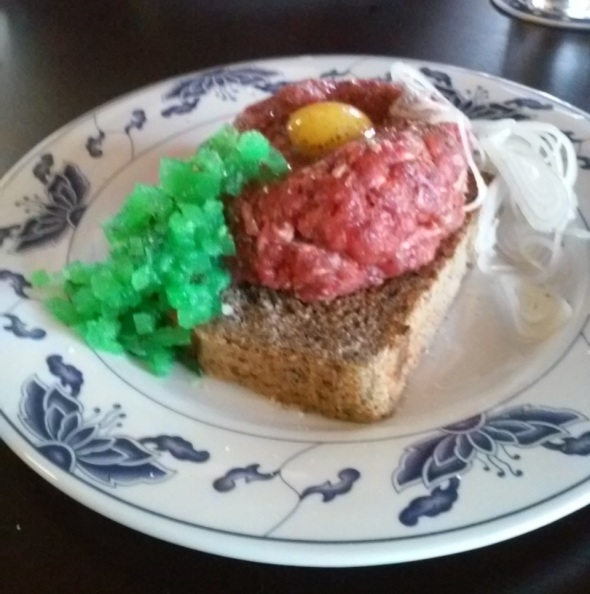 Pat, true to form, ordered the smoked pork sandwich, for $9. 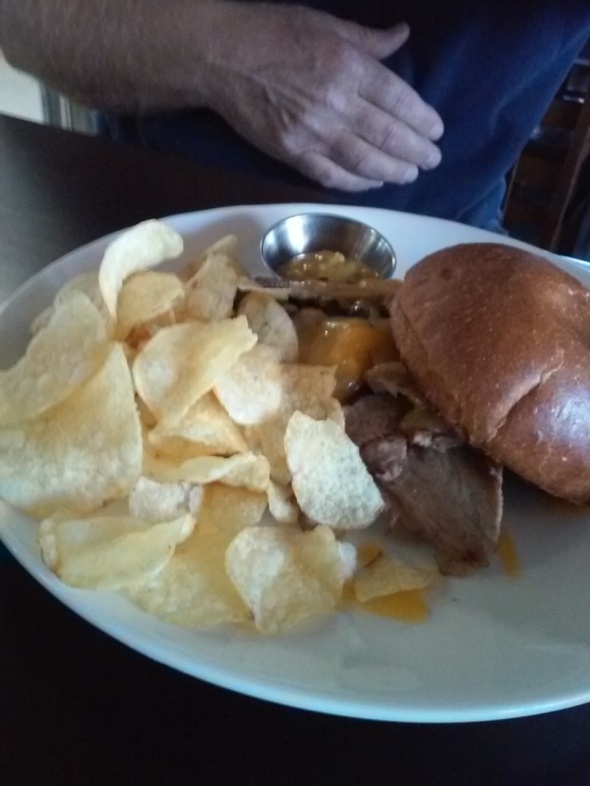 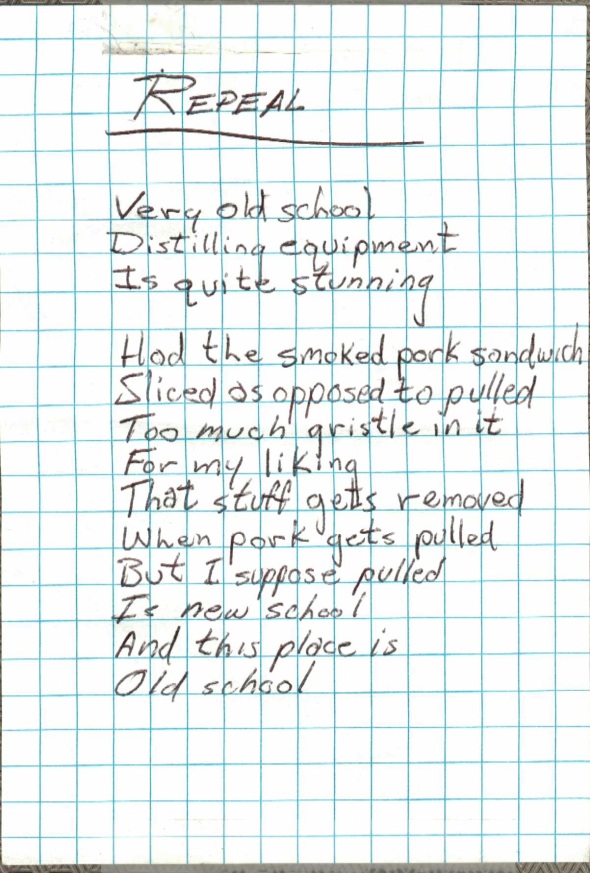 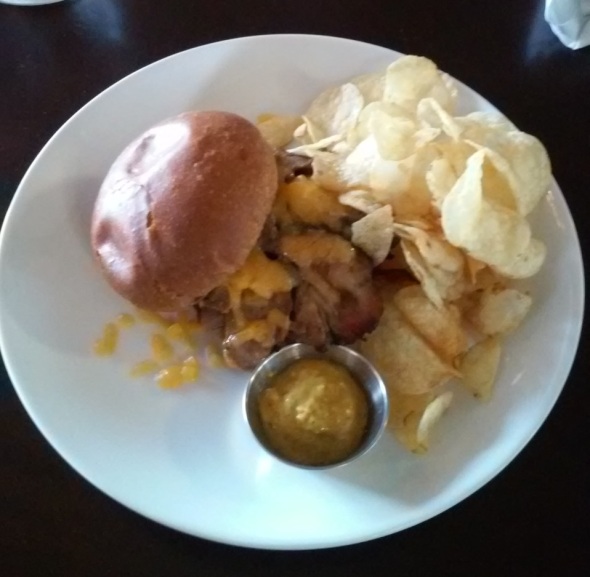 So;this is Repeal. A nice little joint with a few minor details to iron out. We had two menus. One said Brioche bun the other said Cholla bun. I guess Cholla is the new name for Challah. Oy Vey. Still I think it is a great new joint. I want to go back and try the Mock Turtle soup and the Pimento Cheese. And while I am there I might as well have a cocktail.