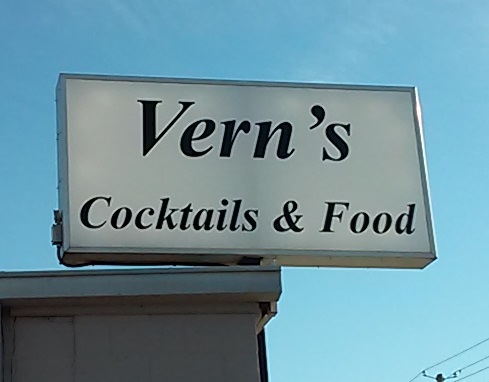 The sign pretty much says it all. It is a nondescript block building that would be easy to miss. However when you go inside it’s a whole different story. Inside is a clean and well put together bar. Pool tables in the front and electronic Dart machines in the back. It is like a shotgun house. Stand at the front door and you will pretty much see it all.

Their menu is as straight forward as the building. A few common appetizers and sandwiches and of course pizza. As an added bonus they offer breakfast. If you haven’t eaten breakfast in a bar at least once in your life you are missing out. 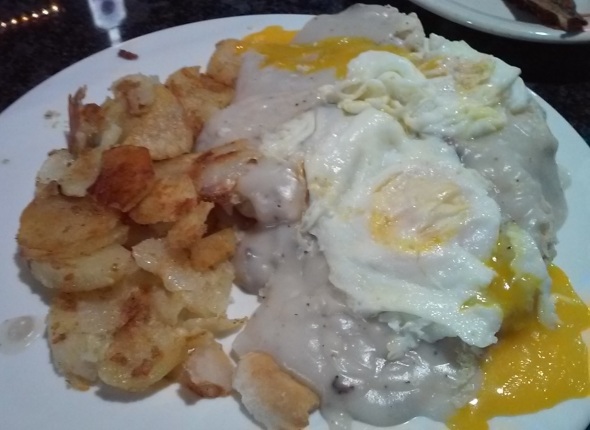 The gravy wasn’t as good as Olly’s but the biscuit was excellent and the potatoes were wonderful as well. You can tell from the picture the potatoes were nicely browned and appropriately crunchy. The eggs burst as they were being plated and the kitchen apologized. I thought that was sweet. Mixing the yolk in with the gravy was my goal. Nicely done.

Pat decided on a lunch type meal A tenderloin. 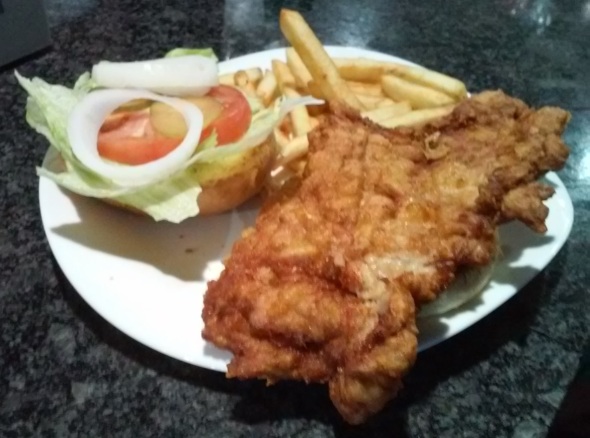 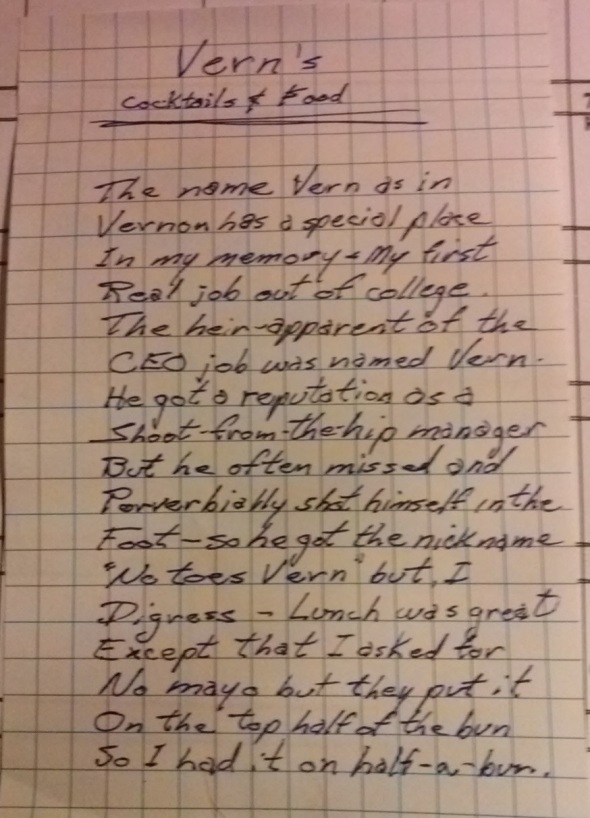 I don’t know if it shows up in the picture but they batter and fry their tenderloin. I have never eaten a battered tenderloin before.

Now no meal at a bar would be complete without a bit of day drinking.

So don’t let the facade fool you. Inside you will find pleasant service and good food at a good price. They open at 11 during the week and are closed on Tuesday. They start at 8 AM on weekends and they have their own lot.

On a rainy day there is just something about an old bar that draws me. We decided to do lunch on Monday instead of Wednesday this week. Since it was rainy we came here. Also since it was raining I forgot to take an outside shot. As soon as we walked in we were greeted by both the bartender and 2 guys sitting at the bar. That is always a good sign. We started off with some breaded mushrooms for $7.95. They offer a choice of 3 dippers, which is unique. Marinara as well as cocktail and ranch.

They tasted pretty good. I have had a few better. I couldn’t place the breading. Had I know that the Head Food Dude was sitting at the bar with us I would have asked. By the time we were introduced the mushrooms were gone and so was the question.

After a long weekend of tryptophan, turkey and carbs Pat and I both craved a burger. We opted for a bacon cheeseburger for $8.75. 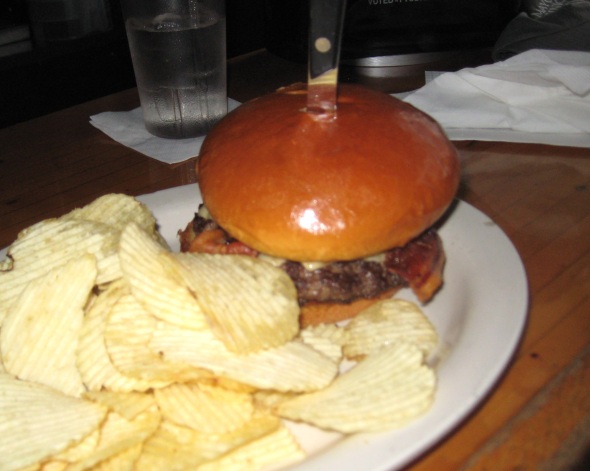 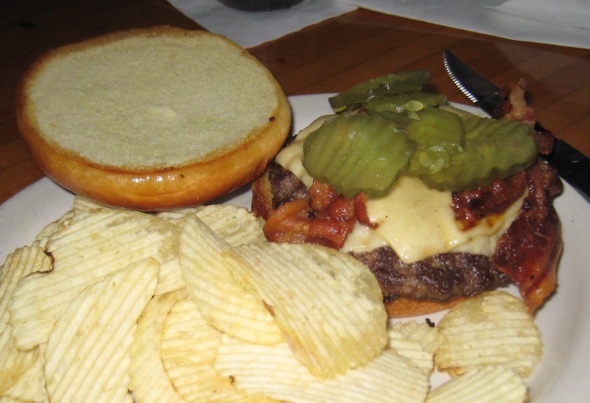 The only difference in our orders was Pat wanted pepperjack cheese and pickle only. I opted for Swiss with pickle and onion. I asked our bartender if they used red or white onion. I can tolerate red onion in a salad but not a burger. Yes I can be finicky. She told me I could have either one. Now that is service.

The burger was tasty, the pickles were crisp, the onions crunchy and the Brioche bun was beautiful. It was a very nice sandwich and they didn’t scrimp on the bacon; 3 strips.

As we entered we were informed of the lunch specials. A Cajun seasoned pork tenderloin and a blackened salmon Etouffee. Normally I would have jumped on the fish but as I said I was craving  red meat. As we chatted with the 2 fellows sitting at the bar I discovered that their current chef had worked at Bourbon Distillery around the time Pat and I went there. If that is the case then he was responsible for my blacked trout with Etouffee that I had that day. The dish was excellent. So this just gives me an added incentive to return and try one of his fish dishes.

So we have an old bar with friendly patrons, excellent service and great food. On and the prices are reasonable. They even offer up great beer specials. PBR and Killian Red for $2.50 per pint. I wish I could remember our server/ bartender’s name. She did a terrific job. So I’ll be back with or with the rain.

Saloons…Bars…Taverns no matter what term you use Manley’s is a perfect example of one. A  menu heavy on appetizers and with certain must have, or you’re not a real bar, sandwiches. Namely a breaded tenderloin, a burger, some type of chicken and roast beef, or steak. All bars have these. Some do them poorly. Some do them well and in the case of the Mutt some do them extremely well.

We started off with some mushrooms. You could tell from the uniform size that they were probably not made in-house. However at first bite you might think they were hand battered and then breaded back in the kitchen. They were excellent. Very crisp on the outside and almost liquid on the inside. Sort of like a savory mushroom cordial.

As you can see I nearly forgot to take the picture. That stain at the top of the basket isn’t grease. I’m not sure what it is. These ‘shrums were not at all greasy.

The lunch special that day was a breaded tenderloin, for $6.99. Believe it or not I really try to watch my fried food intake; so I took a pass. Not Patrick.

I completely forgot to take any pictures until Pat was finished and I was half done. Luckily a guy next to us at the bar ordered one, and he was kind enough to let me use his plate as a stand in. 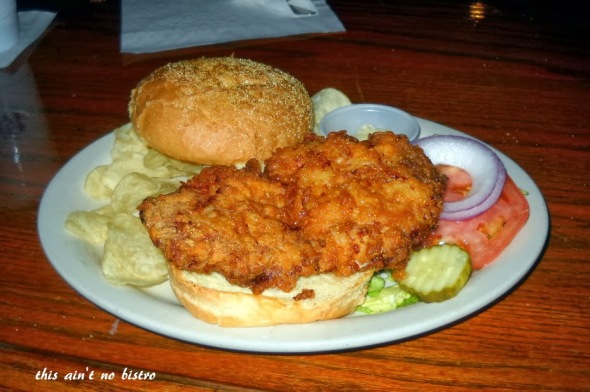 I ordered a Cuban Sandwich. Jerk seasoned pork,ham, pickle and swiss cheese on a grilled hoagie. The fillings are pretty much the same at most places around here the only question is the pork and the bread. This version was $6.99 and the coleslaw was an additional $1.99. The sandwich was excellent. From the spicy tenderloin through the ham and pickle to the swiss cheese it was a complete hit for me. So very tender. All the components represented themselves in tasty fashion and the melding of the 4 created another layer of taste. As for the coleslaw it turned out to be a good complement to the sandwich. Creamy and sweet.

Pat thought I should have tidied the plate up before taking the shot. Obviously I thought otherwise. I think Pat was right.

They have the usual selection of adult beverage. A few crafts for $4 and more Irish whiskeys than I have seen in one joint in my life. And they sell them for 4 bucks on Saturdays. I must say it is refreshing to see a back bar that doesn’t have 25 different vodkas.

Putting on the Ritz…At the New Aristocrat Pub 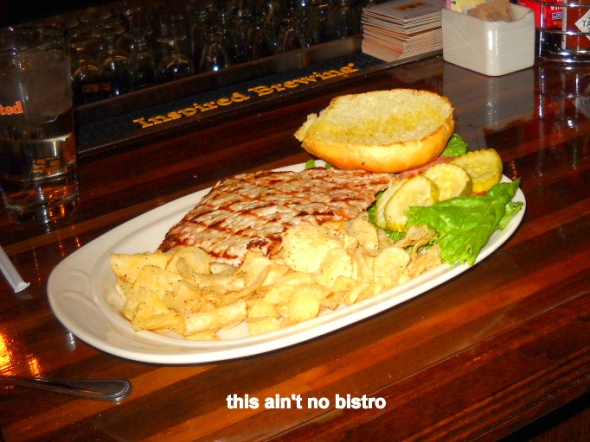 Do you know that over used phrase “…better than ever” ? Well guess what? The Aristocrat is back and it is “better than ever”. For any locals that live under a rock the Aristocrat was (is) a long time establishment that was gutted by fire. It took quite a while but it is back,and Mr. Rising-Moore should be proud of the result. I thought the old layout seemed cramped. The bar was to the side and you had to walk through a dozen doors and through the dining room to get to the facilities. The new layout is open and spacious. The large U-shaped bar,with its 60 tapheads, is the center of attention. And all of the beer they pour are craft or “micro” brewed and cost 5 bucks. You gotta’ love the in your face display of excess. We’re beer; we’re here and we’re not going to go away. Now;to the food.

Patrick,who is evidently on a pork tenderloin diet; had just that, a grilled pork tenderloin. It was a nice size;nicely grilled, tender&tasty. Everything you would expect from the state mammal. I had to have a tuna sandwich. The description was compelling. Grilled tuna topped with a slice of grilled pineapple,with a side of cucumber relish and chipotle mayo. You just can’t escape “exotic” mayo it seems. The tuna was delightful,even though it was closer to medium than med-rare. The pineapple ring was pretty much so-so,too thin to accomplish what I think they wanted to accomplish. As for the mayo it was pretty much what you would expect. A slightly spicy mayo that did enhance the flavor of the fish. The salsa was compelling as well. Small cubes of sweet and hot peppers and cucumber that had a sweet and spicy effect. I still don’t get what they were trying to do with that combo,but just because I can’t see it, doesn’t mean it’s not there to be seen. No matter, it was a fine sandwich and I would eat it again in a minute. So,in summation The Aristocrat is back and well worth the wait.