Without a doubt this is the best looking place we have been to in a long while. Dark wood tables and a massive oblong bar made it a very inviting space. It was also the largest. A barroom dining area as well as 2 other dining rooms. It was pretty obvious that this joint considers Hospitality a serious business.

The menu was pretty serious as well.

Since Pat had a grilled tenderloin last week he got a breaded one this week for $9.49. A Hoosier can’t get too much pig. 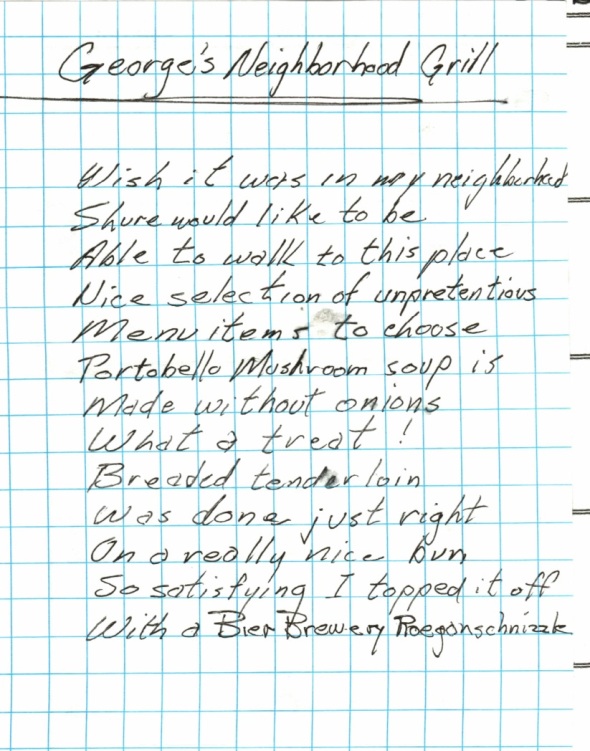 Since it was a cold and rainy day I was pretty sure I needed some beef, and they have several options. I decided on the 8 ounce open face steak sandwich for $11.49.

It was a very healthy cut and expertly grilled to Medium Rare. I just love a good piece of char-grilled beef; especially on a cold day in February. It is definitely something I would re-order. I also got a cup of soup, for a $1.50 up charge. It was very warming and a good start for a steak lunch.

I am with Pat about this joint. I would love to have it in my neighborhood. However it isn’t so far away  a return trip is out of the question. A lovely environment with great food and service what more could you want? 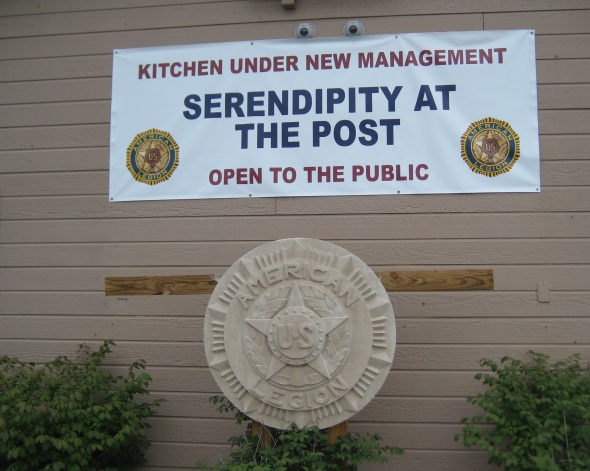 About 3 months ago Pat and I “reviewed” the American Legion Post # 34. Well in actuality we reviewed the food which was put out by a fellow named Pete. I guess Pete has moved on because I got word that a catering company, Serendipity has taken over the management of the kitchen. Here is the link to their webpage. It shows the menus for both their food truck and the Legion.

I was looking forward to the meal because the menu was not your typical bar menu. Sure they have some of the stuff you would expect at a bar but also they offer crab cakes and truffle fries. To start the ball rolling I ordered a side salad. 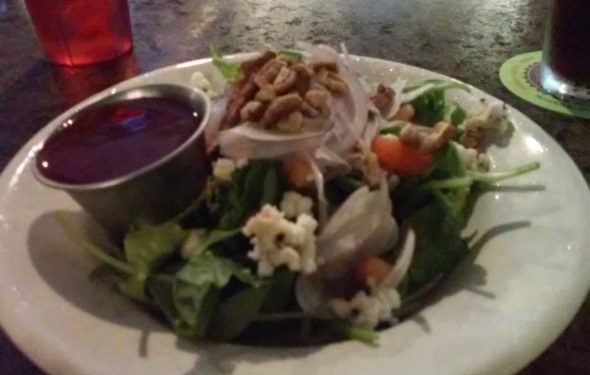 The salad was predominately spinach with the traditional onion and grape tomatoes. It was topped with goat cheese and candied walnuts,which brought a bit of sweet and a nice tang to my mouth. The whole dish was rounded out with an excellent Raspberry Vinaigrette. A great salad and bargain at $3

I opted for a Crab Cake sandwich. The chef doesn’t fry the cakes like a lot of people would he puts a sear on it and finishes it off in the oven. So I can tell myself it is Heart Healthy. 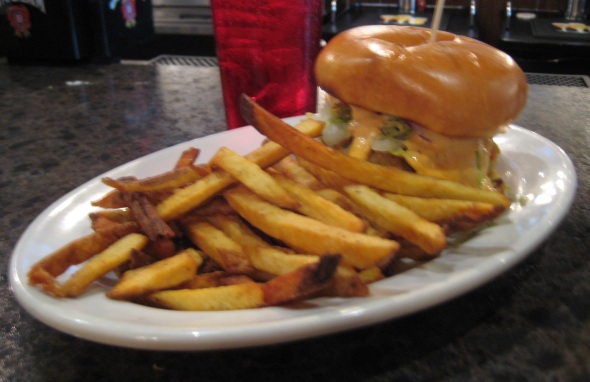 The cake was big with a nice and juicy interior and what I would consider a near perfect texture and consistency. You could actually taste the crab. If I were to order it again I think I would do without the mayo and onion. Both seemed to interfere with the “crabbiness” of the cake.

Well I think the Legion has a winner here. It is going to be a challenge I’m sure. The clientele is more “mature” than other joints so that could be problematic. Some old guys can be stuck in their ways. Also Legions are known for low prices, and Bill;the Chef/owner of Serendipity uses very high quality ingredients so that right there can make the thing difficult. I think that the crew at the Legion is in for some good eating. Also it is open to the public so you don’t have to be a member to dine there. I think they have plans to have certain designated nights for BBQ ribs and Prime Rib. So that ought to be all kinds of fun.