I enjoy buffets. It may because they remind me of my time in Vegas or maybe they just appeal to the Glutton in me. In either event here we are at the Garrison. Home to what may be the Mac Daddy of Sunday Brunch Buffets in Indianapolis. They have a smaller buffet at lunch during the week. We reviewed that about 18 months ago. It was because of that trip that we are here today.

I have said before that taking pictures of a buffet can be awkward and this was no exception. I did manage a few shots but for the most part I just took shots of our over stocked plates. 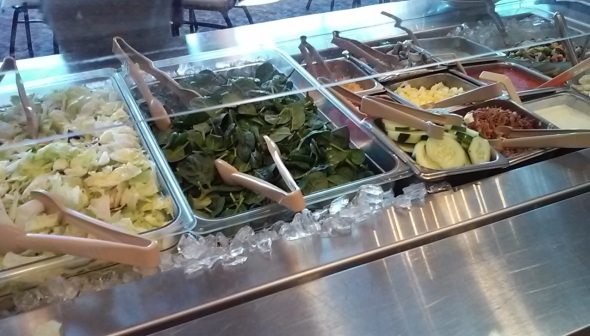 They offered everything you might need for a first or salad course.

And of course a dessert table that would make any casino proud. 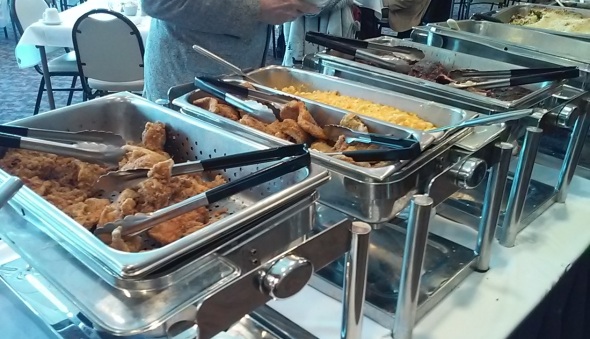 The main buffet line is immense, featuring all the protein and veggie options you would ever want. Baked white fish, BBQ ribs, fried chicken and of course sausages and bacon. They also have a separate carving station featuring glazed salmon, ham and roast beef. In the opposite corner is a waffle station and an omelet station. 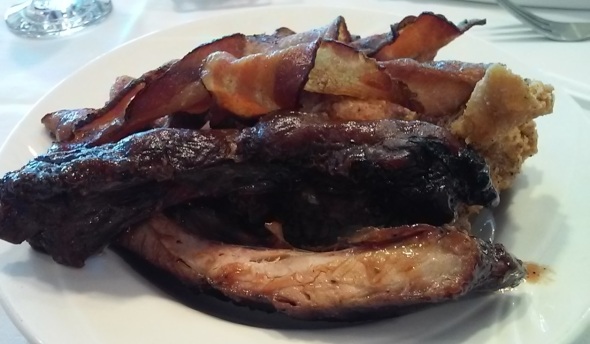 My first plate of protein was actually a bowl with ribs, bacon and sausage. Underneath was a fried chicken breast. The food was all very good. I discovered their fried chicken on my first visit. It is salty and crisp and the white meat is surprisingly moist; considering that it is warming in a chaffing pan. Some of the ribs were a bit chewy but were still good.

These may be ready-made salads but they were still tasty. The 3 bean and Tortellini salads are not often options on a buffet.

I know the height of gluttony. One piece at a time just would not do for me. I had to shove 3 into my bowl. All of their pies and cakes are done in-house by their pastry chef who spent several years at the “Dutch Oven”.

The buffet is staged in the Blue Heron Ballroom with 2 adjacent dining area for over flow. It is a spacious and beautiful room. One whole wall is nearly all glass with large double doors leading to a grand terrace.

I would also like to comment on the service. I don’t think I have ever seen such an attentive team of servers at a buffet before. Prompt refills and removal of dishes. I also would like to compliment Marsha, our server. Thanks from me as well.

Forgot to mention the price. It is $19.99 per person drink included.

MCL has been around since 1950. It started in Indianapolis and now has several locations in Indiana, Ohio and even Illinois. They pride themselves on scratch made comfort food and homemade pies.

The menus vary slightly from place to place but they all have a Blue Plate special and a Mayfield’s Value Plate. That is reduced portion of protein with 2 small sides and bread for $6.99. It used to be called the Jack Benny Plate. That is what we ordered. Fried chicken for Pat and Roast beef for me. 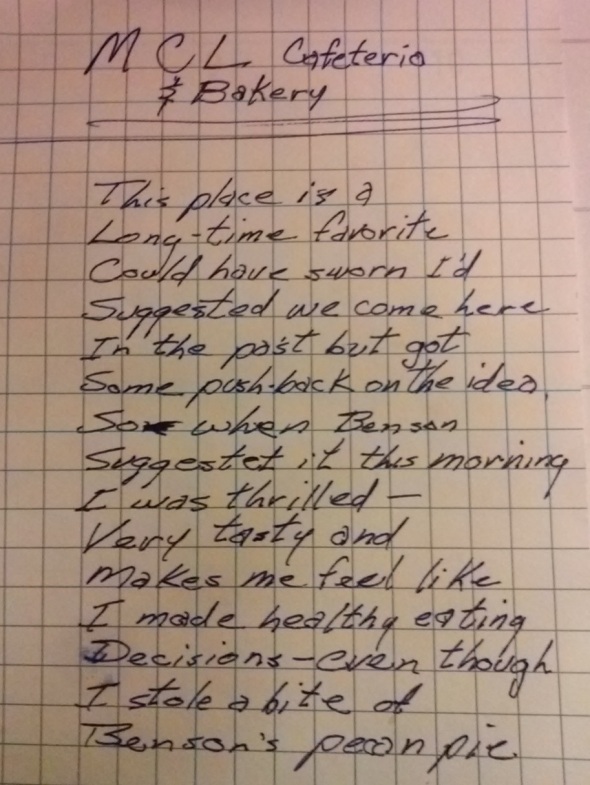 I honestly don’t recall Pat ever suggesting this joint but then he also thinks a lunch of fried chicken, mashed potatoes and gravy with a huge roll is healthy eating. If I did give him some push back I probably had a reason at the time. Maybe I thought they had enough public exposure that they didn’t need our little bit of recognition. They are just as well-known now but we are running low on joints to go to, that is why I thought of MCL for this weeks lunch. So feel free to offer suggestions we are always looking. We don’t do dinner and nothing too “fancy” please as it may scare Pat off.

This was a great little plate of food. The meat was tender the taters were creamy and the beans were soft, the way I like them. I got a couple of Parkerhouse style rolls but no butter. 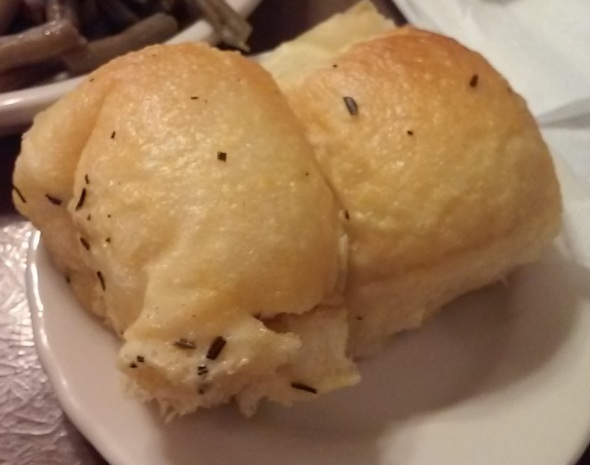 Pat and I both opted for a third side. For me it was spinach.

I enjoy spinach as much as any green. Our bus person Heather brought me some vinegar for the spinach and some horse-radish for the beef so the service at this cafeteria is as good as what you would expect from a full service restaurant. Better than some.

This is my pecan pie. Thick and sweet with a very good crust. On Thursday they offer a slice of pie for 99 cents. How is that for motivation to visit? I am sure most who read this are familiar with the MCL Brand. They are still doing what they have done for 68 years. Putting out splendid meals and great pies. Pleasant folks to have a meal with. 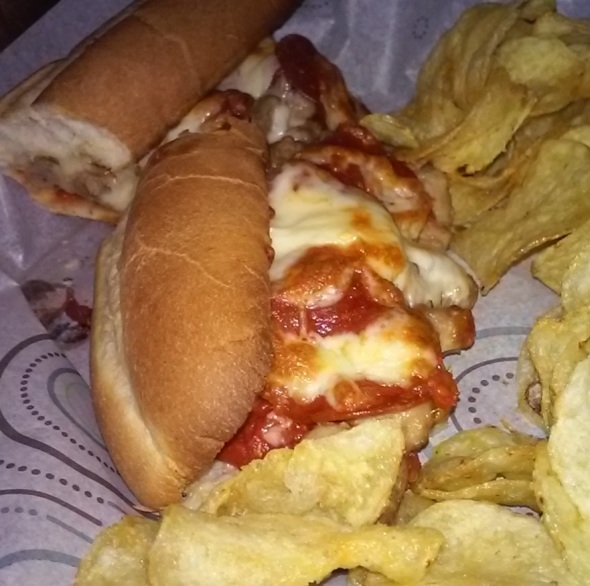 One more bit of trivia about the Long Acre. Back in the day it was owned by a local celebrity D.J. Jimmy Mattis, AKA The Dog. While he was the proprietor he worked on a beef stew recipe in trying to replicate John’s Famous Stew. The Dog gave the recipe to the new owner; Sonley and a young lady named Shannon made a batch. Pat learned this on Monday when he did a bit of recon on the joint. He was also told that it had too many chiles in it. So we had to try some just to see for ourselves.

It was a pretty good bowl of stew and a close match to John’s. However John’s was a tomato base and this wasn’t. In either event it was a good stew and it wasn’t too hot.

Their menu is standard bar fare, and they offer daily specials. The special today was salmon patties with a choice of fries or onion rings for $7.95. It also came with coleslaw.

Here is the Coleslaw

So the Long Acre is back in business. Service is great. Shannon waited on us. The same Shannon that made the stew. She also made the salmon patties. The domestic drafts are only $2.25 and are super cold. Pat’s sandwich was $7.95 and our “cup” of soup was $3.95. So you can’t complain about the prices. They even have a working fireplace in the dining room. I would be back on a regular basis but it is too far for me to drive. But I will be back.

We had planned on having lunch at the only Russian restaurant in Indianapolis. It has been around for a while but only open for dinner service. I discovered this week that they had started serving lunch . I was really excited but I have been disappointed before. I looked up back up joints in the area just in case. Well, they changed their hours and reverted back to dinner only. So I told Pat that he had a choice of Indian or American pub. He decided on American Pub.

The cheese curds were very good. They weren’t built-in house but they were tasty. I don’t think much on the menu is house made. Surprisingly enough it is a one person kitchen. Our bartender/cook was the manager ,who was left by herself because the bartender called in sick. That young lady rocked it.

I had wanted to order the Stromboli but since Pat beat me to it I ordered the Roast Beef Panini.

It was an interesting sandwich. The meat was deli roast beef, which is a bit dry by itself. The cream cheese and sauce brought a much-needed moistness and the peppers gave the sandwich a nice little hint of spice and acid. Our cook asked how I wanted it toasted; which was a nice touch. Like Pat’s sammie I got a heaping helping of Tater Tots. I took half the tots and half the sandwich home. Both were bargains at $9.

I am with Pat about the joint. Were it closer I would be a regular. For me it wasn’t .the food menu or the expansive draft heads it would be the bartender/server/cook. She was a very capable and charming young lady. As a retired member of the restaurant biz I am glad to see someone young wanting to take up this industry as a profession. She even expressed an interest in going to Culinary School. I thought her excitement for food was great. If you are in the area you really should stop in for a bite and a beverage. I am sorry I didn’t do a proper introduction; so I do not know her name. But drop in and introduce your self.

It’s not a large place, but the seating is efficiently arranged and the counter and chairs give it a sleek Nuevo diner feel. I should have taken more pictures of the interior but I foresee a return trip when it warms up. 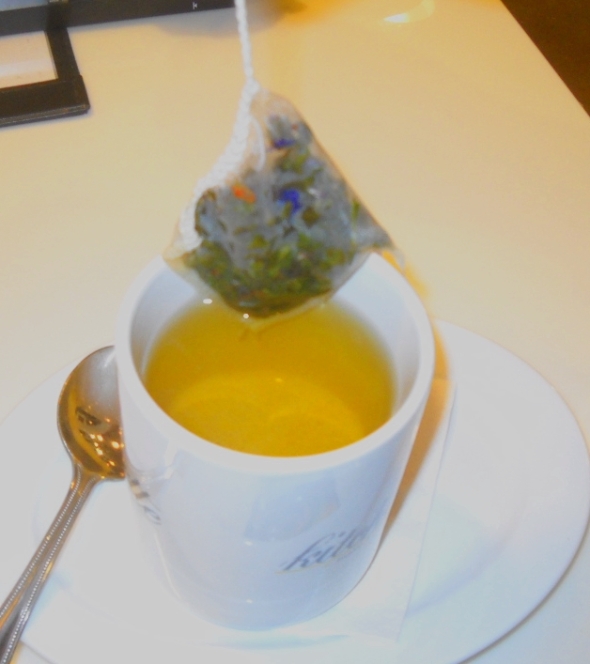 This is the tea bag that Pat found so…charming. 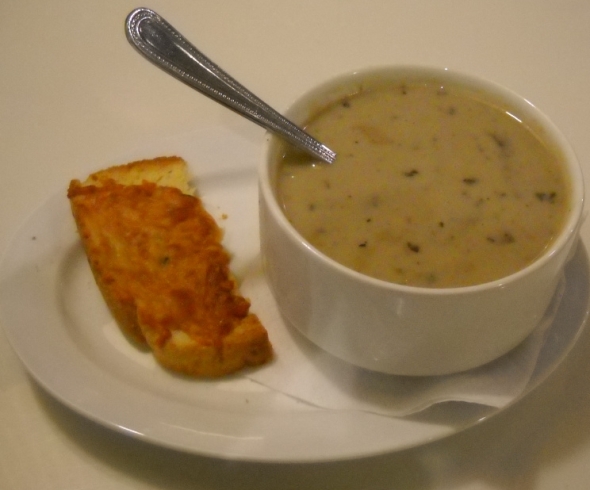 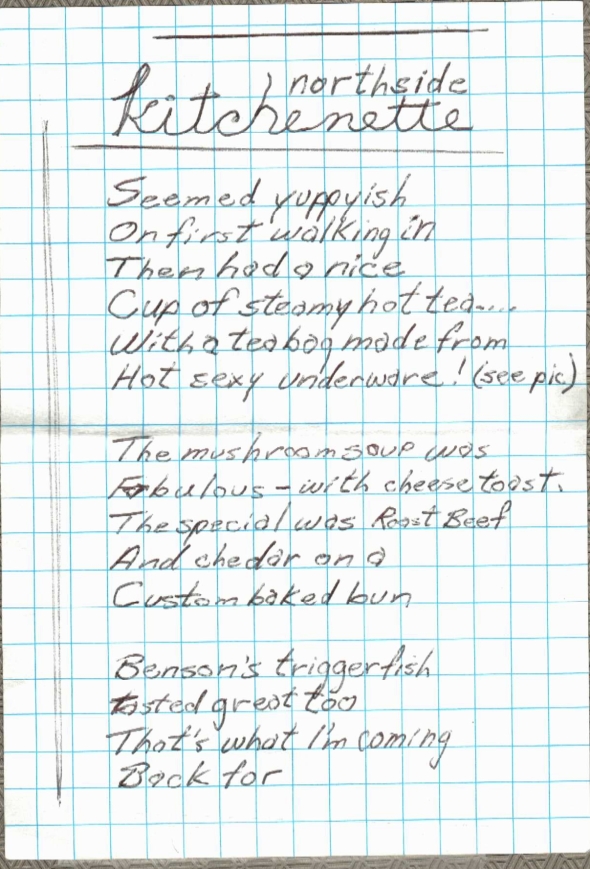 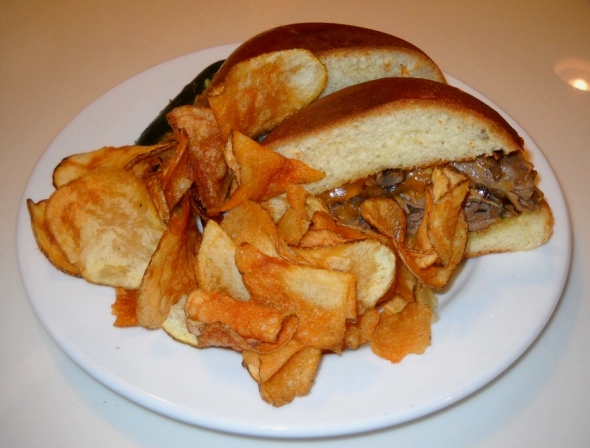 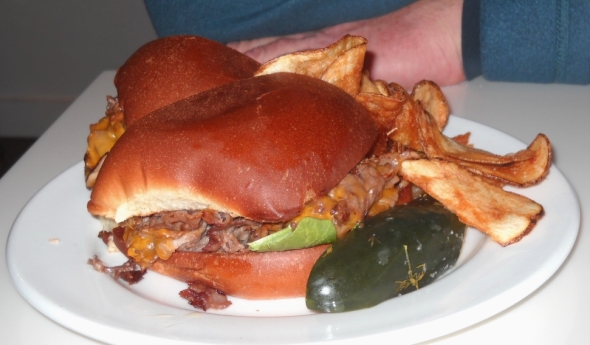 All of their sandwiches are in the $10 range and are huge. Their bread is made by Scholar’s Inn, so you know that is an added value. And speaking of added value, their apparently house made pickles are out standing. They are of the “bread and butter” variety, and are large, crisp and tasty. A good addition to any sandwich.

The one item on the menu that intrigued me the most was the blackened Triggerfish. Our server told us that it was related to Snapper. Holy Gulf Coast, I had to try it. The fish was excellent. The texture and taste were reminiscent of Grouper, but I thought I detected a slight sweet after taste. But it was hard to tell with the sweet remoulade. I really enjoyed the mild blackening of the fish. That is definitely the way to go. I was only able to eat one-quarter as a sandwich. After that I reverted to a 12-year-old and de-constructed it to get at the fish. I think I would enjoy it again just as a piece of fish, with a little salad and citrus vinaigrette on the side. Oh and an extra pickle. 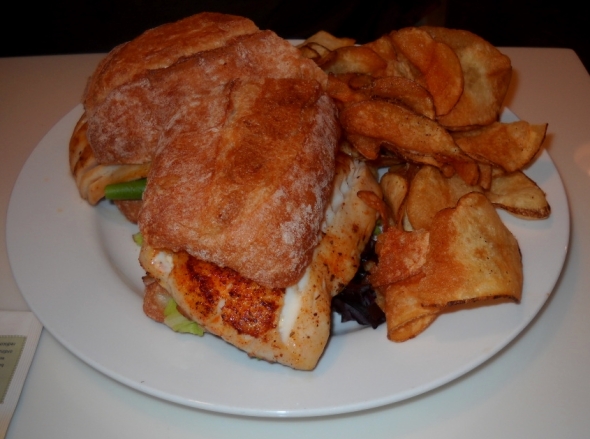 The service was as excellent as the food. She was efficient, knowledgable and very pleasant. This is definitely a must go to place.

Pat and his wife, Fran went to Pure Food over the weekend. There he had a Caprese Panini sandwich;and it so impressed him he “craved” more. Their Caprese is fresh mozzarella; roasted red pepper, arugula and balsamic vinaigrette all on cibatta. Now seriously. What is there not to like ? He did add andouille sausage. Which sounded like a great addition. I didn’t taste the sandwich but I did try a piece of sausage. And I was not real  thrilled;neither was Pat. It had little flavor and I thought the texture was a little too coarse. His side choice was green beans and potatoes. He thought it was good, not great ,but good. I went against my first thought and ordered a Roast Beef cibatta. Sliced beef,arugula,red onion and the ever popular lemon basil aioli. Well I hate to say it,but it was a wee bit disappointing. It was well made and it held a copious amount of beef. The trouble was it was Deli style roast beef. Overall it was flat. Average meat, no texture, no crunch, no zest. Maybe thicker onion. Maybe pickle the onions and maybe change the mayo to some sort of mustard. That’s my opinion; something everyone has. I really like this joint. One average taste experience doesn’t make for a bad “review ” Oh I nearly forgot my side. I tried their SOD; creamy potato and leek. And it was top notch.I enjoyed it very much. As for the pictures; again I screwed up. We started eating and then I remembered to take the pictures. Pretty much par;don’t you think?