Looks pretty mundane doesn’t it. After all it sits in the middle of a sprawling strip mall. Surrounded by  a bunch more. Don’t let its appearance fool you. There is a nice little buffet behind those doors. One with an amazing array of Chinese food. It even has freshly prepared sushi. All for $6.95 at lunch and $9.95 for dinner.

This is the first hot line, with about every Chinese tidbit you would want.

Pat and I were shameless in our gluttony. The Chinese food was very well prepared and everything stayed crisp and hot. They never overloaded any one item, relying on frequent restocking to keep the table intact.

The sushi was nicely done as well. The selection of rolls were rather average, as they bring out the “fancy” rolls at dinner. However they were very tasty. Of course the use of rice and nori was abundant. I don’t think you can expect yellow tail or salmon for 6 bucks. 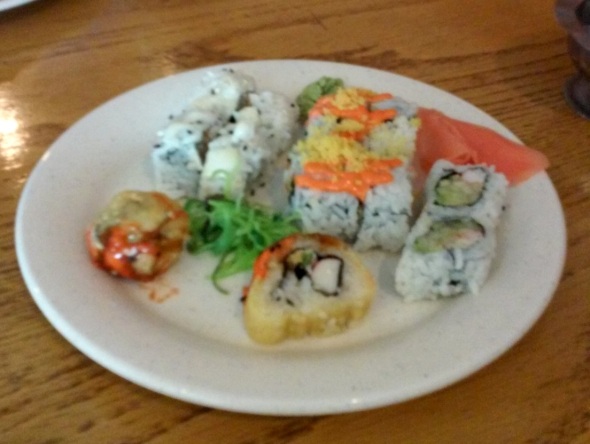 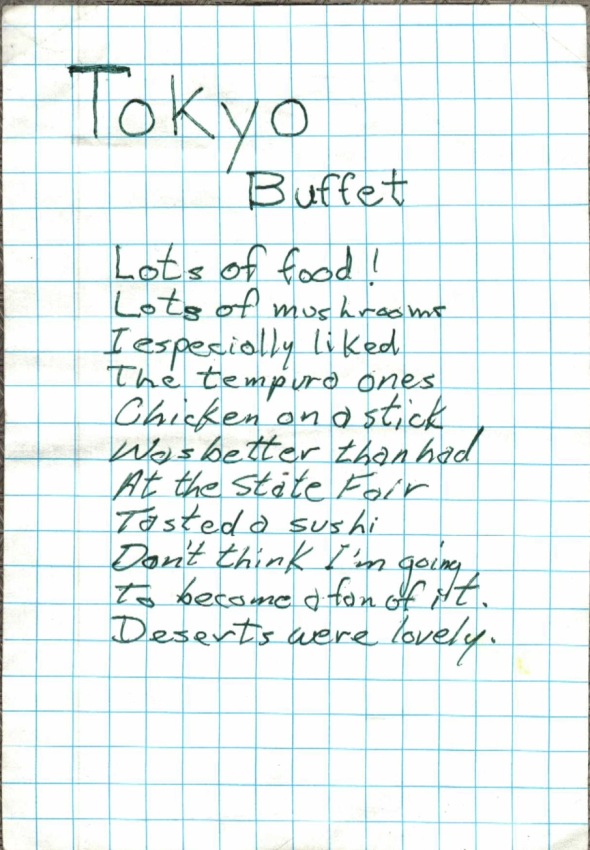 This is the second hot line. Pork and chicken were well represented as well as various veggies, in the form of egg rolls, pot stickers and General Tso’s contribution. I would guess they had more than 30 different items on the steam tables. Plus the sushi and deserts and salads. They even had calamari rings and surimi wrapped in bacon.

This is the salad station. It also had fresh melon and puddings. They even had ice cream in a little freezer. Of course I didn’t see that until we were leaving.

This was the desert station. Little petits fours and cookies and macaroons. I know none of these were house made, but they were really pretty tasty. The ones with sprinkles were flavored with coffee.

This was one of the better buffets I have eaten at. The marrying of skillfull cooking and ready made items made it a very memorable lunch. I honestly think it’s phenomenal that it is only $6.95. 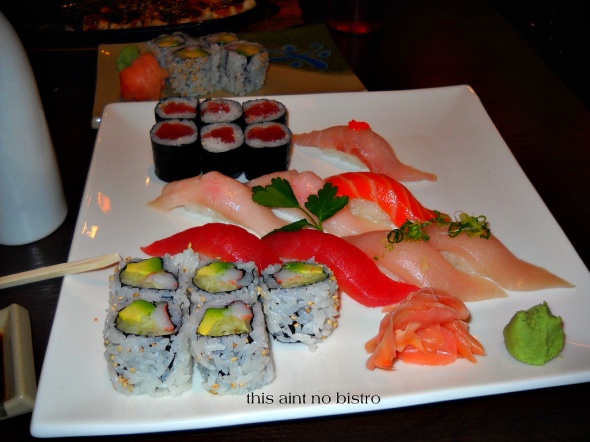 Pat,Fran and I haven’t gone back yet. However my first-born son,Adam went there with me for his birthday. The food was just as good as the first time. Adam is not too adventurous. He pretty much sticks with Terriyaki and California rolls. For $15.95 he got a platter of chicken strips on a bed of slivered onion, dressed with a copious amount of Terriyaki sauce. The chicken was accompanied by a cup of rice, and both soup and salad. He also ordered a Cali roll for about 4 bucks. I stuck with the more “traditional” Sushi Bar Special # 3. That is a Cali roll,a Tuna roll and 10 pieces Nigiri ( chef’s choice ) plus soup and salad, for $25.95. The soup was as tasty as before and the salad was a bowl of plain iceberg lettuce with a house dressing that tasted a lot like a thin 1000 Island dressing,without the relish. Tossed in with the lettuce was a super thin slice of carrot and 2 equally thin slices of cucumber. I will say this. The cukes tasted like cukes. An oddity here in the winter. Regardless how tasty the soup and adequate the salad next time I am going ala carte. I had trouble cleaning my plate.

Adam really liked his chicken  and rice and roll. He too had a tough time finishing everything. As for my dinner it left me fat and sassy and smiling. The rolls were good; as to be expected and the nigiri was nice as well. The rice portion was smaller than I am accustomed to and didn’t have the same sweetly sour taste that some have. I received  5 types of fish. The salmon and tuna I recognized the rest were white and I can only guess as to their identity. One had a dab of fish roe on it, a cool touch. That is the fun about eating at a sushi bar. The rolls with the differing flavors and textures. The sashimi or nigiri with the clean taste of the fish. Altered only by the salty heat of the wasabi and soy. And the whole thing balanced by the hot astrigency of the hot sake. And when you throw in some sticky rice you can’t help but have a party in your belly.