Pat called me the other day and we were talking about lunch this week. He informed me that he had just read the last few posts and realized that he had ordered several burgers. He wanted to get out of that rut ; quickly. I told him that I thought that the quickest way to carry out that was to go to a Japanese joint. I think we have gone to one before. That was Sushi Bar in Broad Ripple. Pat ordered a Tempura lunch special and I ;as usual; had a medley of sushi rolls. This time I was determined to change the pattern.

This is a very attractive place. Spacious and nicely decorated. I found it pretty dark though. Nice enough for a date night but so much for a lunch.

Their menu is very nice. They feature actual Bento boxes with Teriyaki, noodle dishes, maki and sashimi and,of course Hibachi. All are in the $7.50 to $10.75 range, and they come with soup or salad.

I wanted some cooked salmon so I ordered Salmon Hibachi for $10.75. The Hibachi dishes come with the soup or salad, fried rice and veggie of the day. I opted for Miso soup. I do so like Miso soup.

This particular version was excellent. A lovely broth with just the right amount of tofu.

The rest of the luncheon was expertly prepared. The Salmon was a thinner cut than I am accustomed to so it was cooked more than I would like. However it was still very tasty, and the fried rice was superb. It was a brown rice with flecks of egg and onion and the veggies were as you would image from a Japanese kitchen. Tender crisp with a hint of soy. They serve each diner with 2 sauces. A mustard sauce and a “ginger” sauce. Or at least that is what our server told us it was. The mustard had no kick and the “ginger” sauce brought nothing to the table. Flat ; no flavor. 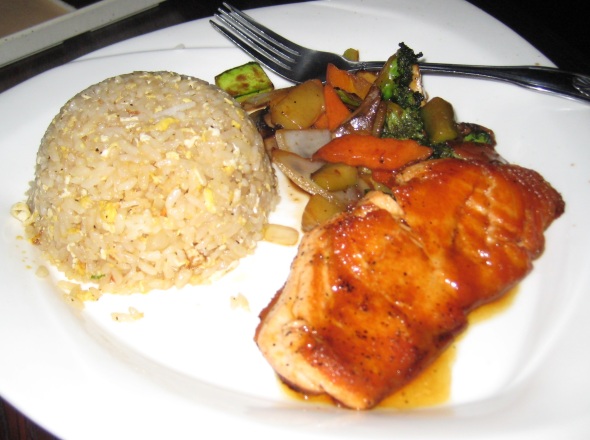 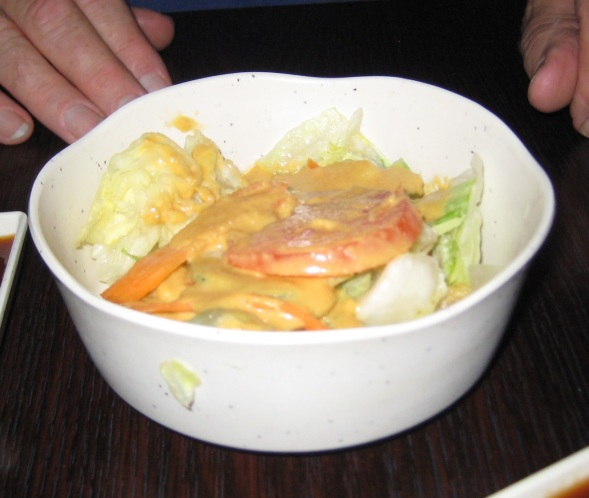 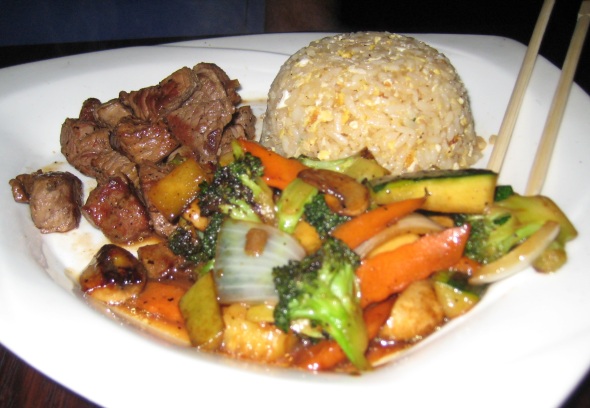 So Pat and I both enjoy our lunches. They were well prepared, excellent quality and great service. He won’t go back because he lives too far away. I wouldn’t mind going back;there are some dishes they have I would love to try. However there are several joints that offer similar food. They may be better or worse;but I will not know that until I eat there. I only have so much time left and there are so many places to visit I have to use my time well. So eat and enjoy it. 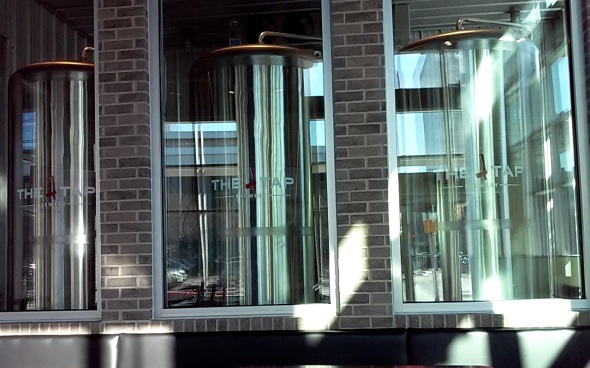 Well one more brewery has come to town. Actually this one isn’t brand new. It originated in Bloomington where it still does a brisk business they just thought they would follow some of the grads to Indianapolis. Be careful with the address. The place is right on the corner of New York and Delaware in the new Pulliam Square project. Where the Indianapolis Star and News building used to be. How they managed to get Mass. Ave out of this I have no idea. This Pulliam Square is a rather swank affair and The Tap blends in well.

It is a large venue with 2 rooms and 2 bars. Above the main bar is a stage for a DJ and a pull down screen with a rear projector for sports. After all the Big Ten football tourney will be coming to town in December. In the above picture the forlorn Santa looking fellow is Pat,and behind him is the row of beer taps. Seventy of them. It doesn’t seem too long ago that a joint having 6 drafts on-line was a big deal. Progress.

Their menu is the new typical for a brewery/bar. The Zomato link has a path to their website showing both food and beer menus. They offer pizza which uses a pre-made dough that comes in frozen and they stretch it to shape. Pizza is always a great choice with beer. 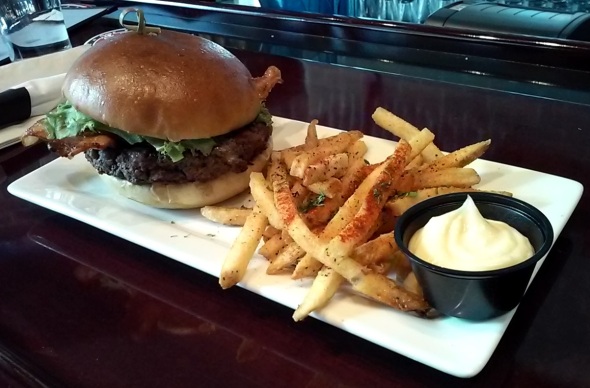 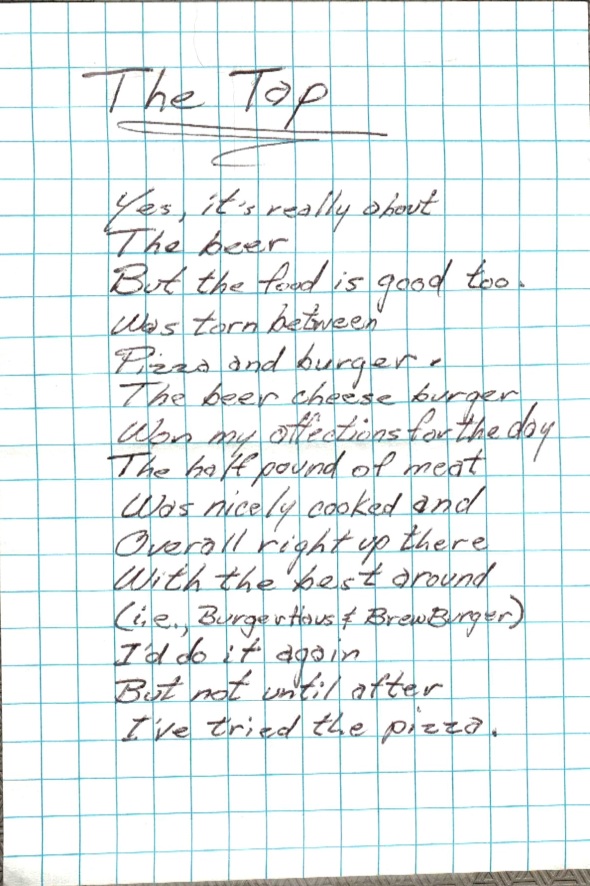 I was drawn to the Ahi salad. A seared to rare sashimi grade Tuna on a salad bed. The bed is a coleslaw, sans dressing, topped with chopped romaine and cheese. In place of croutons they used crisp noodles. The kind that come in a bag that you serve over some Chinese dishes. Frankly I like them,they give a nice crunch without adding a big flavor. The tuna was expertly prepared. Rare and melt in your mouth tender with a great little punch from the Teriyaki glaze used. The salad part was so-so. I have had better salad mixes before. The shaved Parmesan would have been a nice touch had there been enough to have noticed. It was almost as if it was added as an after thought. One very nice part of the assembly was the half-dozen grape tomatoes on it. You don’t usually see that many. The dressing they served is a cucumber wasabi creation. I don’t know if they make it in-house or buy it ready-made but it was very good. I think you could take some fallen leaves from your back yard and add this stuff and it would be delicious. 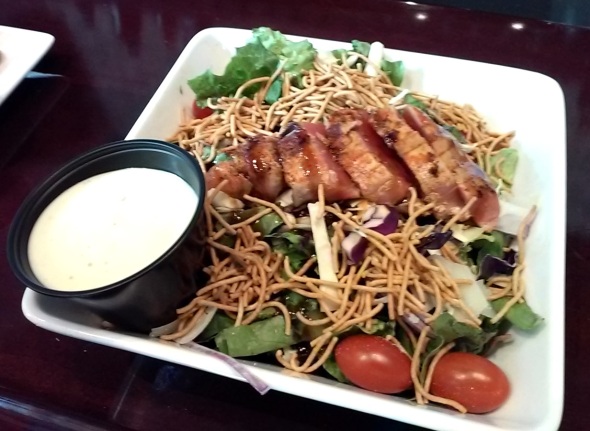 So, overall I really enjoyed my salad, and like Pat. I would order it again. After the pizza;and burger. Another thing I like about this joint is that the windows let in a bunch of natural light so taking pictures is great. Also you can access their WiFi almost without trying. Parking;while hardly good;is better than a lot of places downtown. Of course the Pulliam Project is on going. There is a huge hole at the corner of New York and Penn. Still;I think it is worth a trip. 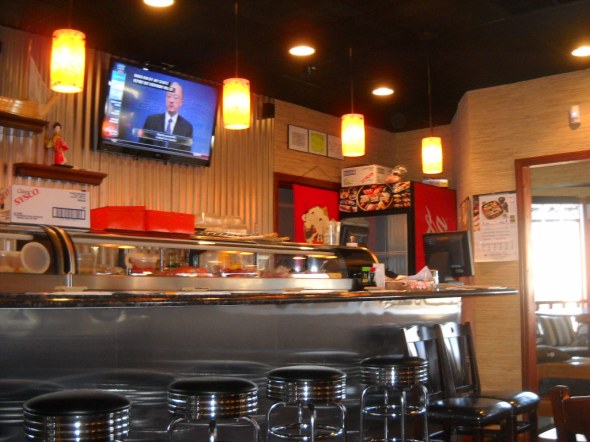 The post I made earlier was actually about our little adventure 2 weeks ago. I’m still a little behind from the Holidays. That post was short because; well… Let’s just say the lunch was not very good. This post will be short as well ,only because I neglected to take any pictures of our food. So Pat and I decided we need to revisit soon; with his better half Fran. They have lunch specials ;a whole board full of different rolls. Pat is not a big fan of sushi or sashimi but he is a fan of fried fish. So he ordered shrimp tempura. Five nice shrimp and veggies with miso soup or salad and a cup of sticky rice( the best rice of all ). All for $7.99. For me sushi,sashimi, nigiri etc are all my favorite. So I got a 2 roll deal. That’s 2 rolls;your choice; miso or salad for $6.99. I decided on the ubiquitous spicy tuna and cucumber& eel. I probably could have made a better selection for texture but I serious thought of a 3 roll combo. Thankfully I stayed with 2; and chose two of my favorite proteins. And what is sushi without sake ? Pat; believe it or not has never had hot sake. He merely had a taste. However he did discover the “allure” of hot wine. I don’t need pictures to describe our total delight at the quality of our lunch. However, since we ARE going back I will wait ’til then to be verbose.